Should Medical Marijuana Be Used To Treat Pets?

As is the case with humans, pets suffer side effects – including liver and kidney damage – from the medication they're prescribed. But L.A. veterinarian Dr. Tim Shu says there's a safe alternative for some of these prescriptions: medical marijuana.

The marijuana extract Shu created for pets, called VETCBD, is meant for animals suffering from arthritis, separation and travel anxiety, appetite loss, seizures and chronic pain. VETCBD is made from cannabidiol, a non-psychoactive extract of marijuana. In other words, pets can't get high – and, according to Shu, the side effects are almost non-existent.

The extract is 19 parts CBD and one part THC, only enough to help activate the CBD so that it zeros in on pain and anxiety, Shu says. "We don't know how animals are feeling, so we look for signs such as barking like crazy or urinating in the house or tearing up the house."

VETCBD is hardly the only medicinal marijuana product geared toward pets. Dre Arriola, retail manager at Southern California Collective in downtown L.A., says she recommends CBD-infused dog and cat biscuits from Gem Stonz Botanicals. She's a fan of Gem Stonz "Woof It" and "Me Ow It" CBD treats.

But don't expect to be able to get your dog or cat medicinal marijuana through your vet.

"There is no evidence to support its use for any indication," says David Bruyette, medical director at VCA West Los Angeles Animal Hospital. "Studies are simply not there to suggest it has any proven positive effects."

In fact, it's illegal in every state for a vet to prescribe marijuana to treat a pet. But pet owners can still get their paws on pet-friendly medicinal marijuana at many dispensaries. More than 60 medical marijuana dispensaries in California carry VETCBD, which is given orally with a syringe or put on food. Pet size determines the amount given from one-ounce bottles that cost $40 each and that, for an average-sized dog, last about a month.

Shu and his business partner, Don Duong, say that, as with anything new and foreign, the key to understanding medical marijuana for pets is education. Duong does a lot of "demo days" at dispensaries, where he hands out samples and talks with pet owners.

Though Shu says VETCBD is not a cure-all, he's convinced it can extend pets' lives by easing their discomfort: "People aren't as likely to jump the gun and euthanize because they think their pet is suffering." 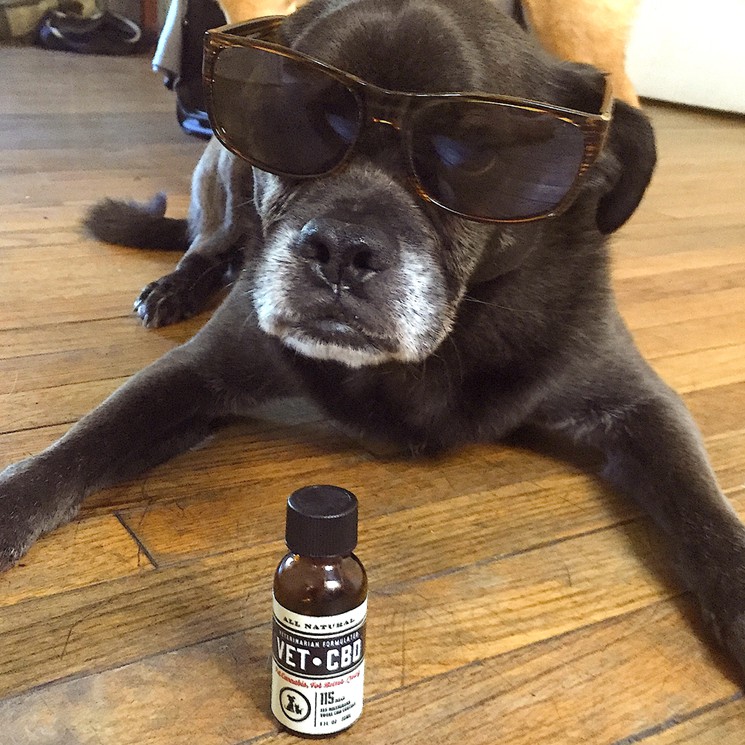 T
Medical Marijuana For Your Pet