I finally broke down and swapped out the 600 HPS for an LED board and am now fully LED. This panel is a Mars Hydro TSW2000 with the older Samsung diodes with a few reds. It's only a 300 watt board using dual 150w drivers, but I had to turn them way down b/c the drivers got really hot. I mounted them outside the room to make accessing the embedded turn pots doable. It's only rated for 3x3 in bloom, but I bet they never imagined it being circled with 16 Vero 29 COBs, so pretty much anything I put in the middle should do fine. I just needed to nix the heat the HPS was creating and now it'll stay nice and cool in there during lights on. I'm still rotating the same strains in the same soil for all of 2020, but will likely ditch the purple and the cookies b/c their yield is lame, but the other 3 yield well. My yields are way up and my overhead now is way low. I'm relentlessly recycling the peat, mixing my own custom ala Megacrop inspired sauce and more gains can be made going forward. I also tried my luck with some veggies out in the yard so it should be a fun summer assuming the country doesn't rip itself apart in the meantime. 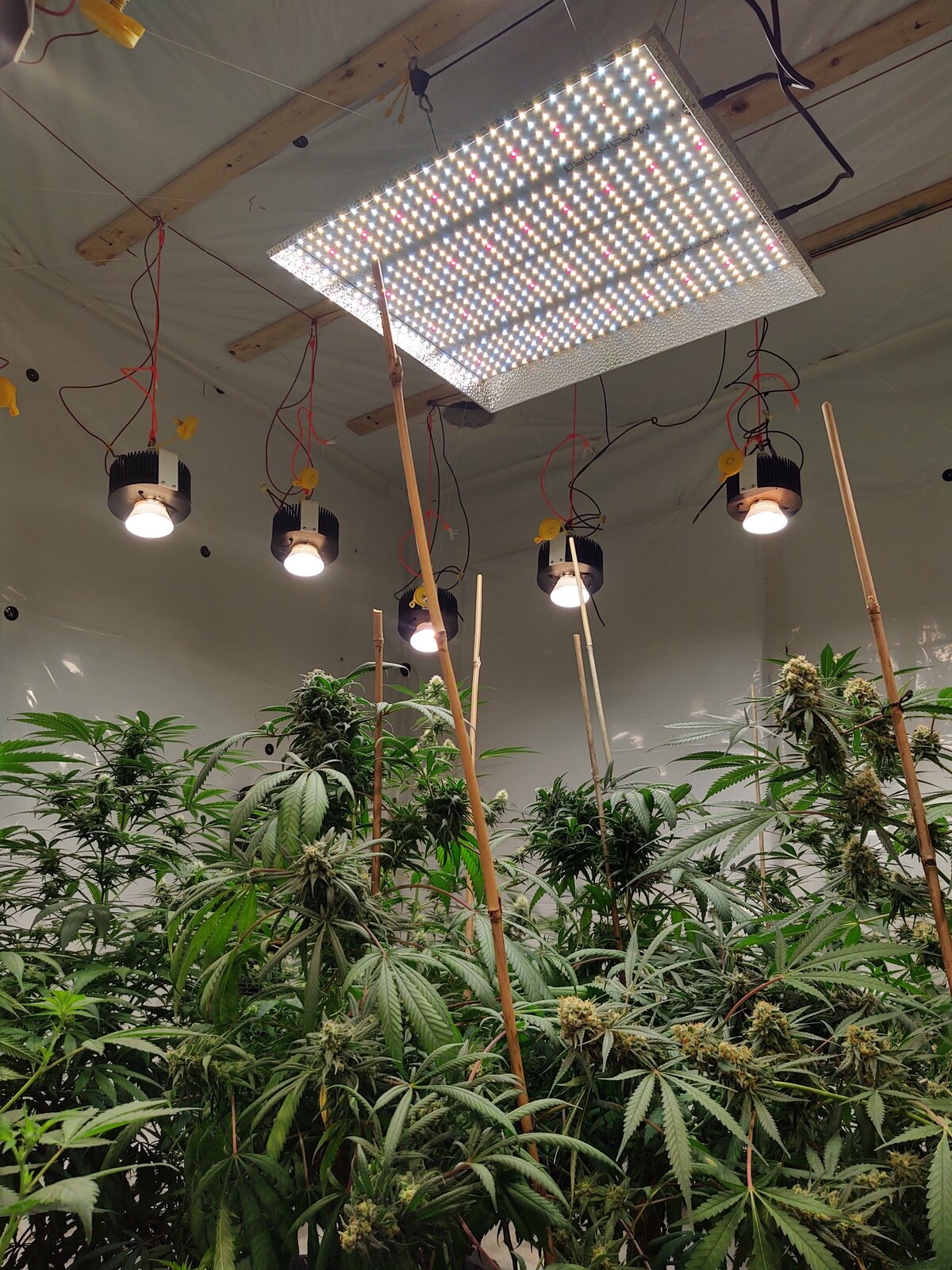 looks good bud I see a pom pom in there that looks cool glad things are going well for you its time good luck brother.
ORGANIC GROW HERE!!

MAY YOUR GARDEN BE GREEN

I saw a post on social media yesterday that depited a bunch of pale thin soy fed fem ANTIFA boys bragging that they took some training to learn how to punch Nazis and now they're ready to go try out their new Nazi punching skills. If all of them clubs ride up for the 4th and them fem boys step to the plate, there's going to be so much damn knock out footage flooding the internet that it'll take days to watch it all.
Current Journal
How to Use Hydro Buddy and Make Nutes from Salts
3D Printer post and suggestions - (growers NEED a printer)
Grow Room Printable Things 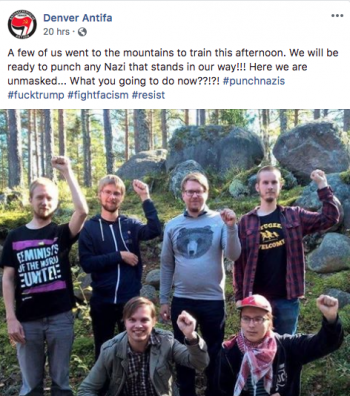 Norcaliwood said:
Dude have a Great 4th of July.....
Click to expand...

Hmmm why don’t I do this I wonder. Some pro gardeners told me the peat moss is really only good for a season and starts to break down and lose its water retention qualities, etc. Clearly not completely true because the high-brixers get away with it.
The Green Hole - my first journal- completed
The Hexapus's Garden - my second journal -completed
Weasel Forges Ahead -current

Weaselcracker said:
Hmmm why don’t I do this I wonder. Some pro gardeners told me the peat moss is really only good for a season and starts to break down and lose its water retention qualities, etc. Clearly not completely true because the high-brixers get away with it.
Click to expand...

I think the brixers only go 4 or 5 rounds. FWIW, I sent my last year's peat soil out to the yard to grow some veggies in pots and notice that the soil is rather airy, so maybe it can't retain as much water after a time? IDK or care because whatever the issue, I can just adjust the ferts as needed, lol.

How's things up on top of the world?
Current Journal
How to Use Hydro Buddy and Make Nutes from Salts
3D Printer post and suggestions - (growers NEED a printer)
Grow Room Printable Things

Well- two friends I know who garden professionally and definitely know a lot of stuff once told me that the peat moss/perlite mixes are really done after a season. So ever since I was told that (many years ago) my approach has always been to compost the stuff after one grow. Looks like I could save myself some money and effort.

Things are good! I’ve been out on the water a lot. The fishing is so awesome now without all the sporties and tourists around. Have been stocking the freezer- smoking and canning salmon, getting a few deer, trying to keep up with all the harvests and gardening,etc.
The bigger boat, while it’s enabled us to catch large amounts of fish, comes with so many new learning challenges. Mostly fun ones. . Basically this time of year it’s always hard for me to get inside to where my Internet access is before I’m too brain dead to find anything smart to say, lol.

I will update my journal! Trust me it’s on my mind every day. I keep trying.

How are things in America? You guys get me a little worried sometimes...
The Green Hole - my first journal- completed
The Hexapus's Garden - my second journal -completed
Weasel Forges Ahead -current

We're about to rip each other to pieces down here, but hopefully it doesn't get that out of hand. Sounds like you're firing on all cylinders up there. Have you researched making fish hydrolysate or burying fish is the ground? The natives taught the pilgrims this when they first got over here. I think the reason I can reuse the peat is because I use it like a soilless medium and don't reply on it to retain anything more than roots. After a harvest and chopping the plant right to the ground, I flip the can over a tote, peel off the fabric pot, and poke the root mass a shit load of times with these shelf cuts to loosen the peat from the roots and gently comb and poke as much peat as I can loosen from the roots, and am able to mostly get it down to the main bunch of roots so that what's left behind has minimal roots left in it.

This lock down made certain things harder to locate for me. Perlite was one of those things. Normally I could shoot up to Home Depot that was 3 miles away and grab a 2 cubic foot bag of perlite for $18, now they no longer stock that at my local store and had to order it over the internet. IDK what sized perlite you use, but I don't know how to reclaim my perlite if I needed to, so if my peat ever stopped working, I think I'd probably just throw it all out and start over. Mixing 3 cubic feet of dried peat is no easy task when done n a bedroom, so when I do it, I want it to last for months and months. I wish I was this frugal when I was buying $40 bags of rockwool frequently, though if I could ever go back to hydro, I would probably just use big stone perlite like Tead does. But generally speaking, my grow is fantastic. I use very little electricity and water and all other aspects are paid for. Making nutes and reusing the $25 medium has my only expense to be the utilities and still taking 1 plant every week. I'm even weeding out the GSC and A Purple because they don't yield well and will focus my attention on the cheese, Bulk and PC till I can get another seed order. 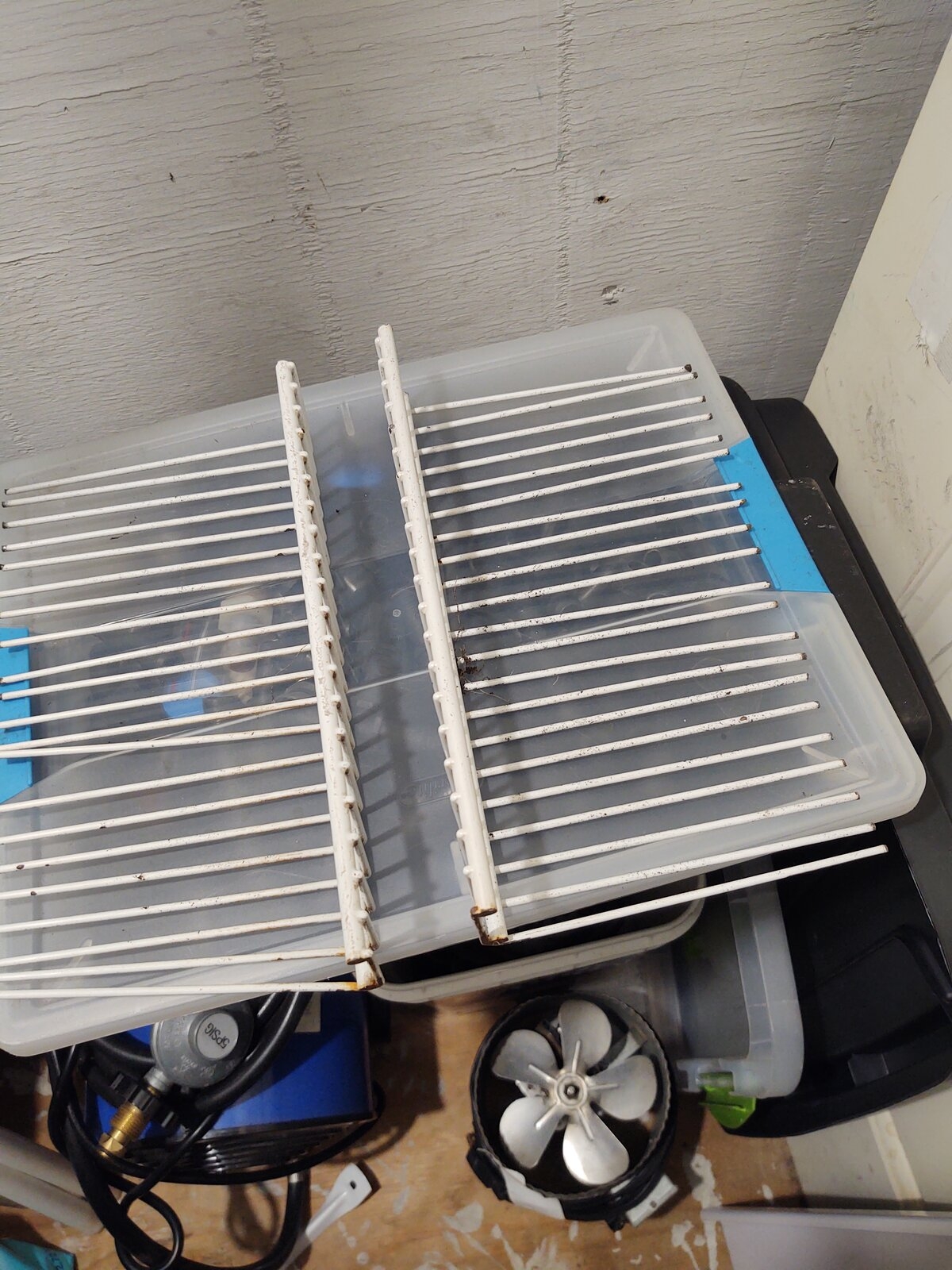 Edit - sorry, I forgot to include the pic of the shelf cuts
Last edited: Jul 14, 2020
Current Journal
How to Use Hydro Buddy and Make Nutes from Salts
3D Printer post and suggestions - (growers NEED a printer)
Grow Room Printable Things


All's good. Just wanted to say hi. Hopefully all's well with you too

Though I'll keep lurking in the shadows, I'd say my journaling days are done. My grow is doing great, but every week I start new clones and harvest a medium sized plant and everything is just rinse and repeat. If any'a'yous get bored and want to talk nutrients and PPM and all that crap, stop by my HydroBuddy thread and we'll chew some fat, otherwise, happy growing and thanks for contributing to my journals.
Current Journal
How to Use Hydro Buddy and Make Nutes from Salts
3D Printer post and suggestions - (growers NEED a printer)
Grow Room Printable Things