Smart Test For Stoner Only....!

I read this article - was pretty good. What you think?

are the ones who use cannabis as a creative tool to enhance their lives. They know cannabis can be an asset if used intelligently. Bob Marley, Willie Nelson, Louis Armstrong, Ken Kesey, and Stephen Gaskin are among the many cultural icons that fall into the smart stoner category.
Ever since the Partnership for a Drug-Free America began putting ads on television targeting the use of cannabis by children, more kids have been using marijuana. Obviously, the more you talk about marijuana in front of children, the more curious they are going to be about it. Telling them that it's bad is not going to be much of a deterrent. In fact, many kids just naturally enjoy the outlaw thrill of breaking rules set by adults. Right now, it's easier for kids to buy marijuana than it is for them to buy a six-pack of beer because the cannabis is sold out on the streets, while the beer is sold in licensed and regulated outlets.
The solution is not to put more negative advertising on television, but to stop talking about pot in front of children. All that's needed to accomplish this is for the adults to establish a code for cannabis, one that the children don't understand.
We also have to ritualize the use of cannabis and turn it into a rite of passage. That way, when our teenagers reach the proper age, they can be inducted into adulthood by being awarded with the keys to the cannabis code. And what is the "right age?"
That varies considerably. I like the standard set by Stephen Gaskin in his book Cannabis Spirituality. "...there's a ceremonial place," writes Gaskin, "when a teenager takes up as much space as a grownup, eats as much food as a grownup and works as much as a grownup. They participate in creating the adult community vibe. It isn't fair at that point to treat them as children. I think some teenagers can be damaged by being excluded from important ceremonies."

Unfortunately, I cannot in good conscience label myself 'stoner smart'. I'm not stoner stupid, but I'm right on the fence probably. I've waked and baked when I had exams... albeit easy exams that I knew I would pass. If I have a lot of weed, I like to get baked a lot during the day, but when I'm running low I always do my best to conserve my stash to prolong its existence. Likewise, there are also times when I like to not get high but once or twice a day. So... like I said. A little from column A, a little from column B. I wish I could be all stoner smart, but until I land a job and start supporting myself I will have to say I'm located in the middle.

It's like one of those circle-graphs in geometry. One circle is STONER SMART. The other is STONER STUPID. Then in the middle there's a smaller circle, comprised of people falling into both categories. That's where I am.
"I'm against picketing, but I don't know how to show it."

"The depressing thing about tennis is that no matter how good I get, I'll never be as good as a wall." 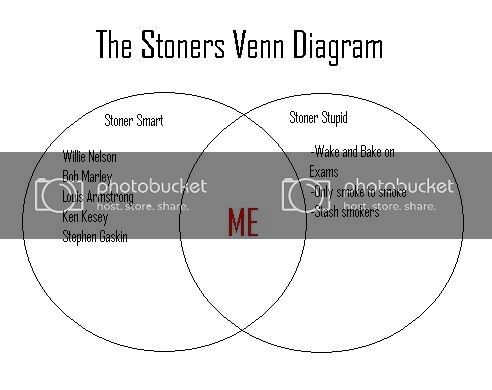 I'm more of a smart stoner than a stupid one, even though I'd say I belong in the middle category.
I don't have a problem with Marijuana, only when I run out!

that was a pretty sweet article with really good points, thanks for posting it, i consider myself stoner smart.

Yea, I've been keeping it to weekends and maybe indulge in the weekday if nothing is going on for the whole time i've been smoking. I consider myself a smart smoker.
Heck, even if kittyloaf, even if you did do all those things in the stupid stoner catagory, you're at Johns Hopkins, so people can't say shit.

I consider myself to be a competent combuster,or a smoker supremist. - OnionGobbler

I did it a minute before my class was starting.

I never claimed to be smart.
'Tis war, red war, I'll give you then
War till my sinews fail;
For the wrong you have done to a chief of men,
And a thief of the Zukka Kheyl.

Well I know where I am at.....!
I will try to help all stoners and educate you in the art of growing and picture taking the best way I know how to, I am NOT the best but I am pretty fucking good...!
"It ain't braggin' motherfucker if you back it up"
Kid Kock
Thank you
MV...
Last edited: Feb 22, 2005
I came here to chew bubble gum and kick ass...

<< stoner smart but stoner stupid when there is nothing better to do. i am a gemini so i have both
A

i would say i am stoner smart...i have smoked everyday for the past two years and before that at least 1-3 times a week for another 2 and a half years....yet i was salutatorian of my high school graduating class and i was voted best of show in art countless times at countless shows (the creativity part)...i also have a 3.9 GPA at a very well known university in missouri and i am on my way to getting a degree in chemistry and either going into research or med school...pot doesnt make someone stupid unless they let it take over their lives and unless they are stupid to begin with...if used properly it can improve concentration on one thing at a time and enhance creative minds...i have found it to be a great way to relax after studying for or taking a big exam and a great way to meet new people and explore new things like music and movies in a different way or dimension...basically...its all in the eye of the beholder (needless to say i often come up with my deepest thoughts when i am high...)

I would have to say i used to be severally stoner stupid up until about a year ago now i am in the middle pretty close to stoner smart
"Live Life So You Can Say What You Have Done, Not What You Would Have Done"

I ordered kittty loaf. Please gimmie all your loaf.

thank you, I'll be here all night

I guess I'm in the middle as well. I do well in all my classes and everything, and make sure I set a good example, but I have smoked before exams only to put myself in a relaxed and concentrated state of mind.
420 Magazine
Creating Cannabis Awareness Since 1993

VENN DIAGRAM! That's what I meant when I said "circle graph in geometry".

Nice going, Dank. I'm right there beside ya.
"I'm against picketing, but I don't know how to show it."

"The depressing thing about tennis is that no matter how good I get, I'll never be as good as a wall."

Well I see there is 21 of us that are smart lol.

James420 said:
im in the 3rd word i do it For alot reason runs in family Shit laods of problems i know Fuk that just my accuse but Im Very smart im above smart but i juist dont show it and other shit but im Very knowelgde able and right now working on a coupy sites
Click to expand...

What is a "Grass-hole"? - Stoner Lexicon

G
How many actually care about Cannabis legalization?