Hey peeps, I decided to start a journal on my organic White Widow grow.
My seeds came from 420 sponsor Dutch Seeds. I am growing organic. My lamp is a 1000W MH and I have 4m2 of available grow space. My seeds popped on 1 June with all 10 up. I veg'd for 28 days and went into flower on 28 June when the plants were 24" tall. The images were taken on day 10 of flowering and I must say I am pleased so far. I broke my ppm meter so I have been eyeballing the ferts. I am a gardener by trade and am relying on my eye to judge whether the plants need more or less food. The images show 8 females - I thought I had 9 females at first but a second and perhaps a third male may show.

I've taken my reflectors down to make it easier to see the plants. 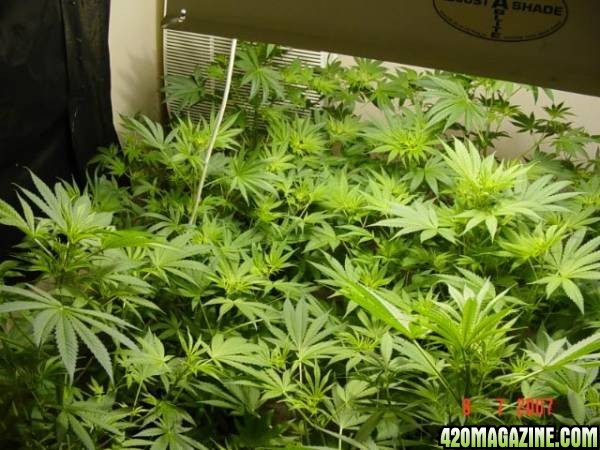 The plant in the right rear is a suspected male. The rest are girls 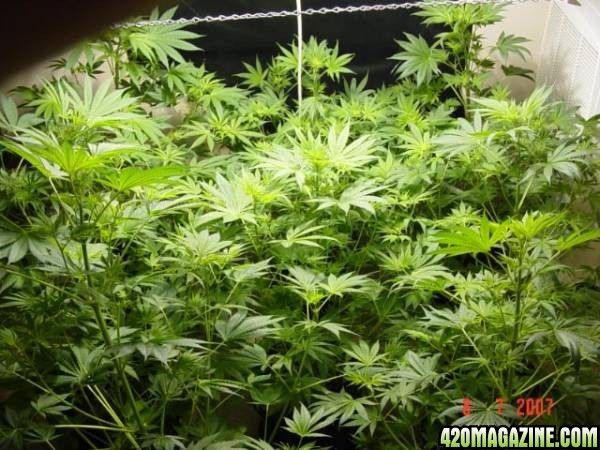 This is a nice shot of the 8 girls as they finish the flowering stretch. 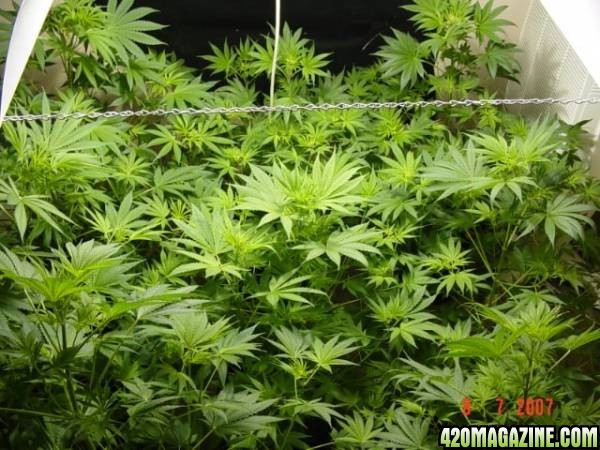 This is a nice shot showing the healthy foliage. 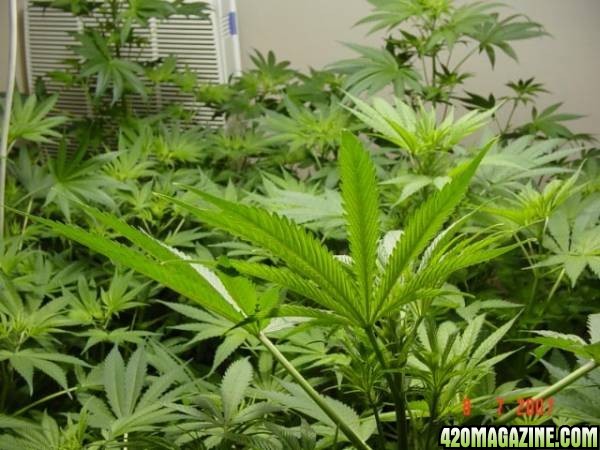 Damnit mark you have been hiding these babies from us? You sneaky sneaky australian, you...

They look awesome!!! See ya in the fricken sky dude, damn.

Very beautiful garden! With your skill, you must stay busy with your trade.
I am quality control for all my medical needs

Thanks guys. I was a bit hesitant at first, as I felt a bit daunted by Dank's friggin' amazing grow, but what the hell I thought.
J

How much did the seeds run you? 8 outta 10 females is pretty wicked.

The seeds cost me $50 US from memory. The trick to rapid growth is to use the MH as soon as the seeds pop. It's something most folks don't do, either for economy or because it's what they've been told. I had to use a spray every few hours at first, to stop the medium from drying out, but the intense light from day 1 is the way to go. In nature, seedlings would have full sun from day one so I don't see a problem and the results speak for itself. I foliar feed twice a week with a very dilute sea weed solution we have here, which acts as a growth tonic. In the early days under such intense light, you have to keep the ferts up or the plant will literally starve itself cos of the small root system. At about week 2, I start using a dilute foliar spray which I make up which is combination of the sea weed tonic and a mixture of fish and blood and bone fert. This gives the necessary nutients for the plants, and I have found that the blood and bone is a good way to provide much needed calcium in the early days. As I have an organic medium, I have to be careful with my ferts because of the slow release effect of the organic mix.
Last edited: Aug 29, 2007

Looking great! That's the same thing I did... as soon as they all broke I put them under the 1kMH kept them moist for 3days then started a wet and dry cycle..... you switching to HPS for flowering??? just curious

No, sticking with the MH - I'm an asthetic at heart and the plants look prettier under the blue/green in the MH spectrum lol.
I think though, that if I had followed early advice to the letter and used CFL's longer, I would have had ten girls instead of 8. Regardless, my aim was to fill the 4m2 grow area with plants, which I was able to achieve in 28 days. Allowing for the removal of the two males, that gap will be filled by the remaining 8 girls as they stretch and branch in preparation for flowering.
On my next grow with Motarebel's Dirty Harry (GrapefruitX Herijuana), I will use the MH again as before so I DO get a male. With Mota having been busted and his strains in very short supply, I want to make sure I get more seeds from my own grow.
Last edited: Aug 29, 2007
B


Smokin.Moose said:
No, sticking with the MH - I'm an asthetic at heart and the plants look prettier under the blue/green in the MH spectrum lol.
I think though, that if I had followed advice to the letter and used CFL's early, I would have had ten girls instead of 8. Regardless, my aim was to fill the 4m2 grow area with plants, which I was able to achieve in 28 days. Allowing for the removal of the two males, that gap will be filled by the remaining 8 girls as they stretch and branch in preparation for flowering.
Click to expand...


Hmmm so MH spectum is better for the looks, eh? how much of a diff does it make? You'll have to excuse me if this is 'common knowledge' I've read a few books and spoke with countless people..... never heard of that

So if you would please elaborate

You get a bigger yield with an HPS for sure, but by how much I don't know. I do know that it is not by a large percentage. Under the MH the plants are an emereld green, rather than the drab olive colour under HPS. You can pm Madame crash. I can't find her post in the archives. She will be glad to help you.
Last edited: Aug 29, 2007

very very pretty. makes me want more light.
do i see grow support in your future?
420 Magazine - Your Best Choice For Cannabis News

Mate, I hope our current team of grow gurus will be around for a while, but yes. At sometime in the future. I'm fascinated by Cees from No Mercy Seeds. That dude rocks. You know he gets 700gms from one square metre using 600W HPS seven times a year! Cees says that if every square centimetre is not yielding, you are failing. He has much to teach. No Mercy Supply

Yep. You will have to Google them up. I do believe they have a few Bog strains as well.