Welcome to my first grow...

I'll be growing in a 5:1 Black Gold/Perlite mix, which the seeds were placed in on germination. Black Gold® Natural & Organic Potting Soil is pretty much zero across the board (0.005-0.0-0.0). Four seeds went between some paper towel and all four germinated within 24 hours.

At the moment they are in natural light, and I have a Spectra LED 290 coming from Mike @ Grow LED Hydro which they'll enjoy as soon as it arrives (hopefully just a few days time!).

The room they will live in will be moderate to warm, 80-85 degrees, with low humidity.

And yes, they have names, beginning A,B,C etc., as they sprouted!

Please say HI to Alice and Betty (both Rom--they germ'd and sprouted before the SD's, who weren't too far behind), and the two little Sour Diesel ladies, Cathy and Deloris. These went into the soil after germination three days ago, and last night (Sunday) the two Rom's raised their heads. Twelve hours later, all four had made their appearance, and only Cathy is missing some color. 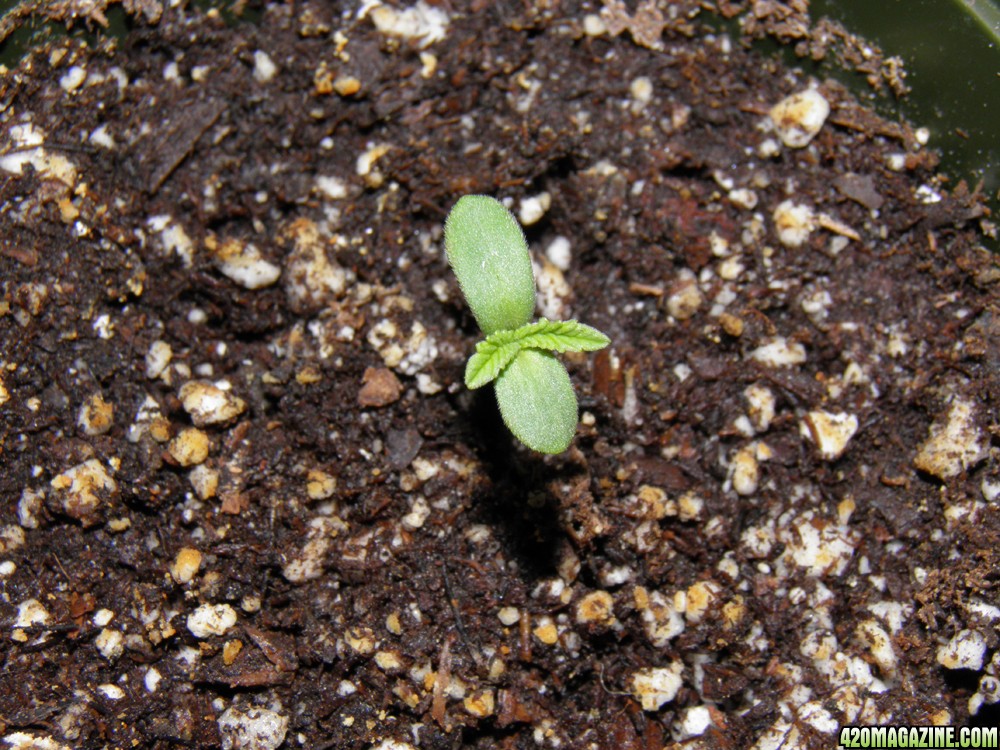 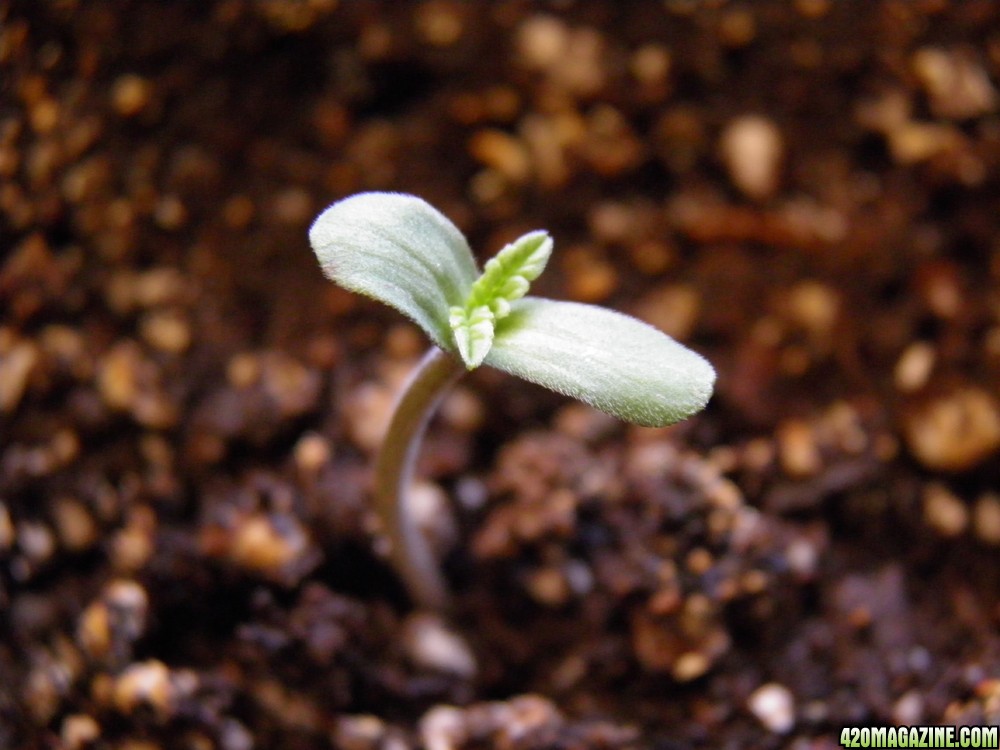 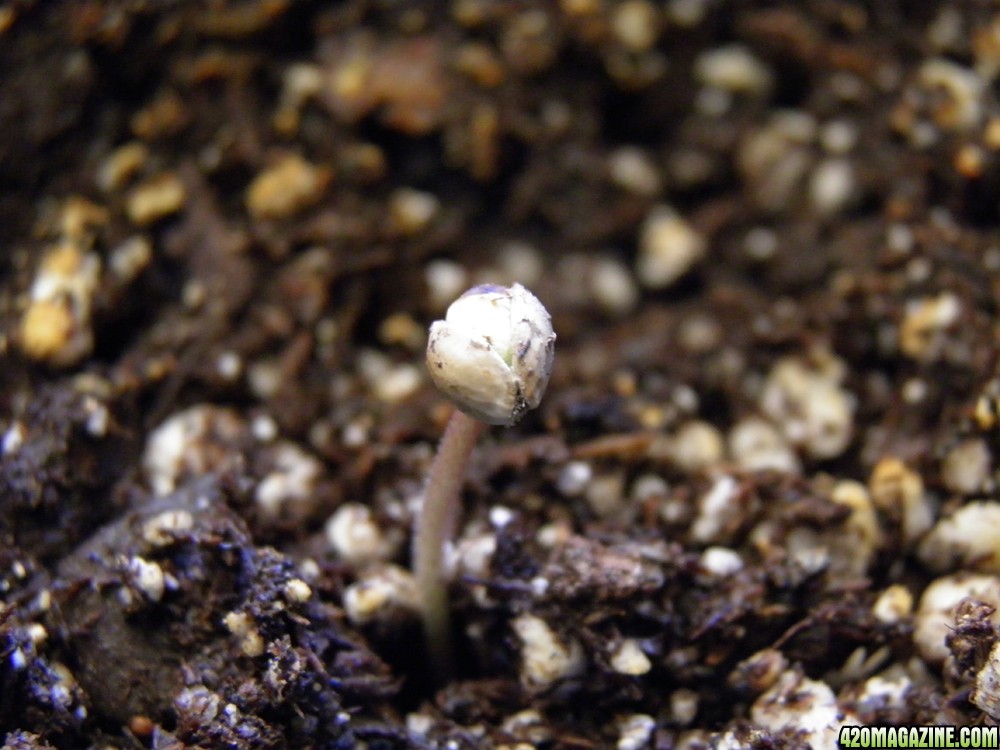 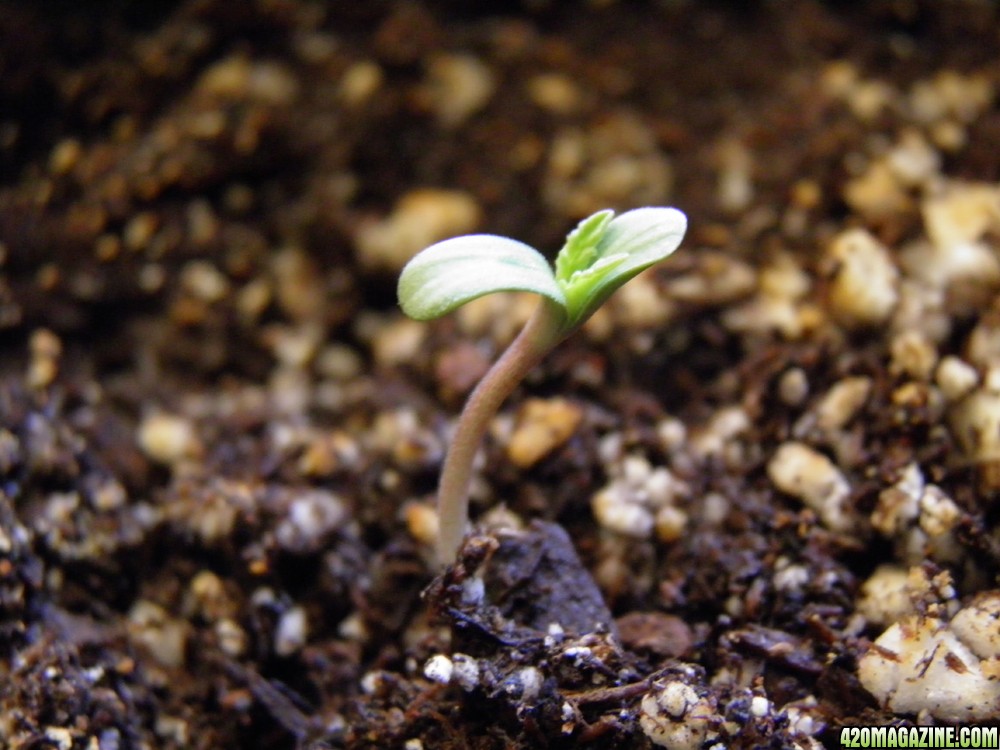 Last edited by a moderator: May 5, 2011
Romulan/Sour Diesel, Soil Under LED

Sounds and looks good so far. I use the same soil, so you're good. What kind of nutes will you be using?
Round-3-cheese & hash
The Kid's 2nd Grow - Continued
2nd Grow - Lowryder Purple Jems - Abandoned
KannabisKid's First Grow - WWM and Freebies - Hydro
Plant Abuse Chart
S

I am looking at the Iguana Juice Grow/Bloom, or the Dutchmaster Goldwhich seem to give reasonable bang for the buck, but would it be worth paying more for the Sensi Grow/Bloom 2-part nutes? It would cost twice as much but if the payout is worth it in the long run...

Out of interest, how long would the 2 liters of of Iguana last on a 4-plant grow?

I actually have a kelp-based nute that weighs in at 16-16-16, but not sure if that has any place in the grow. Any suggestions? I will get the specifics on it later today.
Romulan/Sour Diesel, Soil Under LED

I haven't used any of those, but I know I've seen people using iguana. I use Fox Farm nutes. 1L of each, grow and bloom, should get you through a 4 plant grow and then some, but I've never used them so I'm not sure. Remember, you're only giving nutes once per week.
I just read over the Iguana Juice. Sounds good. Might look at that line of nutes myself.
Round-3-cheese & hash
The Kid's 2nd Grow - Continued
2nd Grow - Lowryder Purple Jems - Abandoned
KannabisKid's First Grow - WWM and Freebies - Hydro
Plant Abuse Chart

For sure congrats on the little ones. I will be along for the ride.
Have a great 420!
We have 2 ears and 1 mouth, listen twice and speak once...

Better late than never, here are the specs on the nutes.

Is this stuff any use and how/when would I use it? 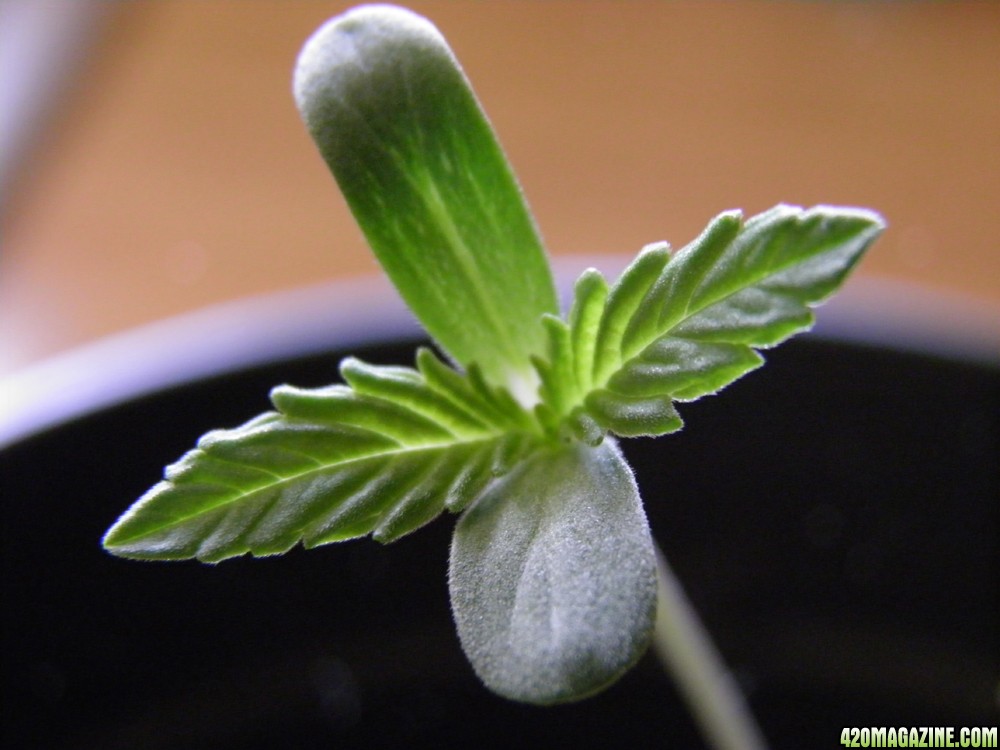 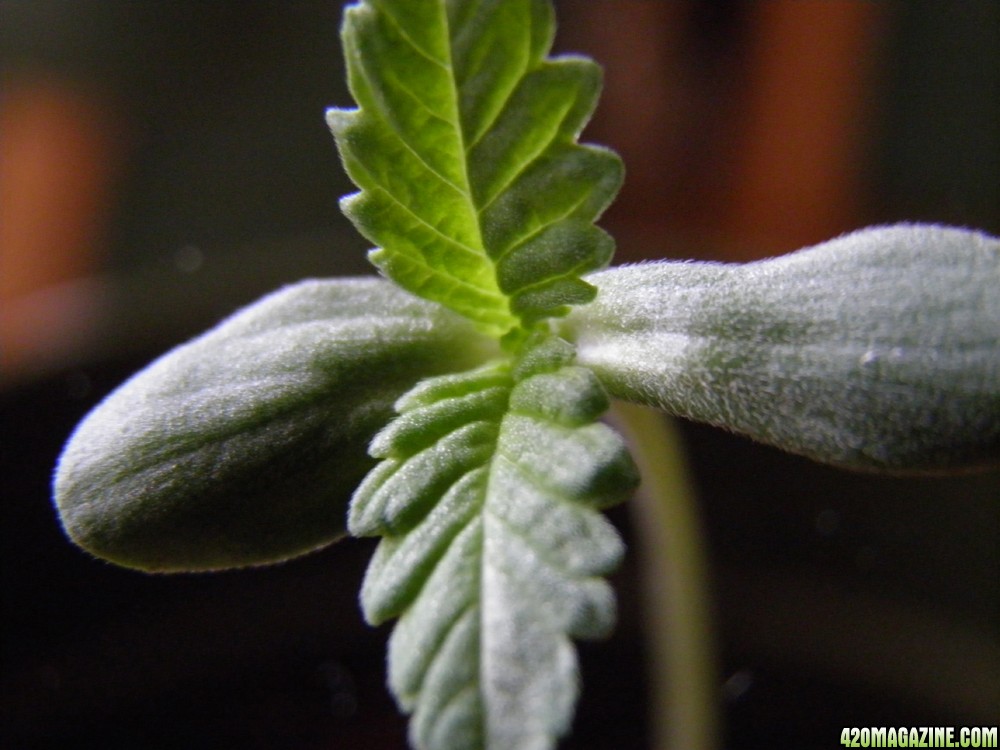 Good morning. I so love seeing opening up like that. its like when a child wakes and opens their eyes to you nothing like it. I am sure you are a very proud parent!
I would say for the first is do nothing for at least a couple of weeks then a mild 1/4 strength when you water. I would add both in together at the 1/4 strength.
just my 2 cents.
Cheers!
We have 2 ears and 1 mouth, listen twice and speak once...

Thanks for the response, MSquared.

I am still not sure if I should be adding more N to the mix, tho', as from what I understand the grow needs the extra, and the mix I have is even across the board. I have yet to pick up any other nutes (the nursery near me has a good range, but I might be better off finding a hydro store for the more commonly used ones such as Sensi).

I'm still waiting for my LED to come in. I was hoping that they would be basking under the LED by now, but it's taking longer than anticipated. I was assured it would be shipped out by early next week. So I rigged a temporary lighting system up for the girls using a couple of 100W daylight CFLs (100W equivalent, 27W actual @ 1750 lumens each). They were stretching WAY too much even in the window, and just over 12 hours after introducing them to their new lights, they have given up with the stretching and now seem to be focused on leaf growth, which is quite noticeable.

No pictures right now--later I may do a side by side showing before and after their first 24 hours under the CFL's.
Romulan/Sour Diesel, Soil Under LED
S

Well, the side-by-side pics never showed up--mainly because there was so little difference after 24 hours under CFL that it was not worth it. After that I decided the sun was too good to miss, so they have been out every day since, and back in at night under the CFLs. And what a difference! Today they hit the 2 week mark, and to be honest they are not as advanced as I was hoping they would be. I know a lot has to do with the light issue. Are these strains just slow growers?

The LCD did not show last week, but I am expecting it some time later today (according to the shipping). Then I'll set up a more permanent arrangement that wo'n't need me to move them around so much (I think I may have damaged one of Cathy's leaves, as if she didn't have enough problems of her own. She's still a lot smaller than the others!).

Yesterday I started them on some nutes. As in a previous post, I did have some Sea Grow 16-16-16, as well as some with extra N, however the latter turned out to be not very water friendly, so I stuck with the Sea Grow, and they seem to love it. One day made a huge difference. I know I'll have to make a trip out this weekend to get them something more suited to their needs. I do have some Miracle Grow Orchid food that is very high in N, but I haven't heard many good things about MG, so not sure of that would be a good move.

Any thoughts on their size? They seem a little small to me, considering they are two weeks old. And one thing I didn't expect at this stage was the smell. The two Roms have a faint minty smell to them, whilst the SD's just smell of.. well.. plant! Is it normal at this age? 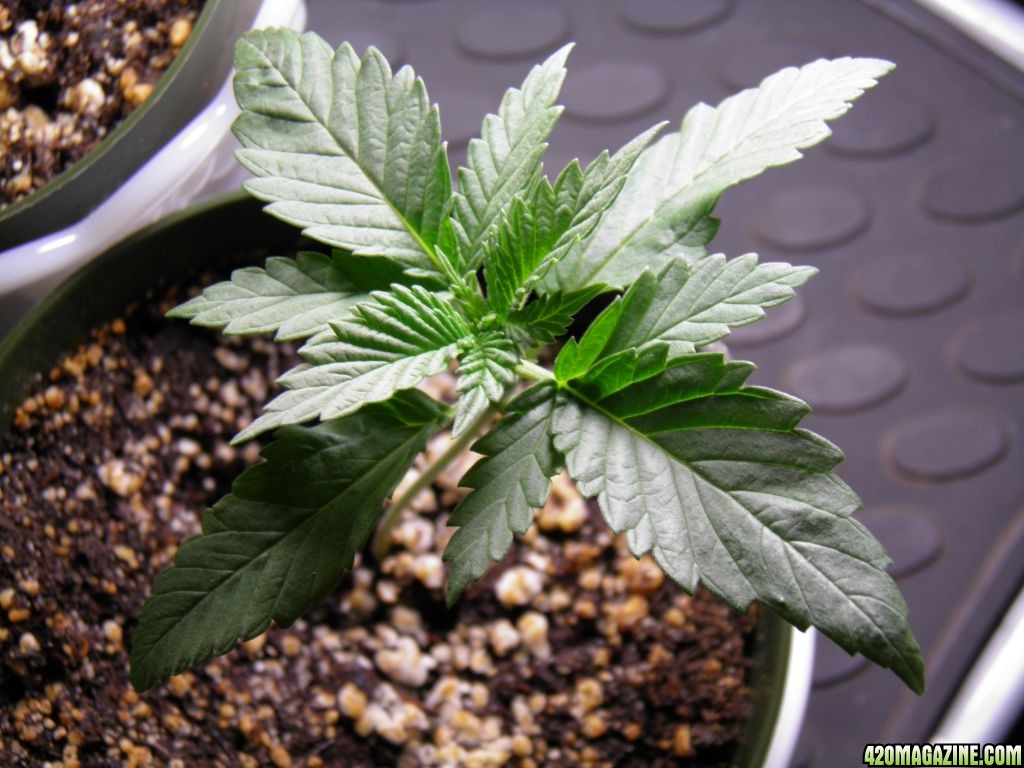 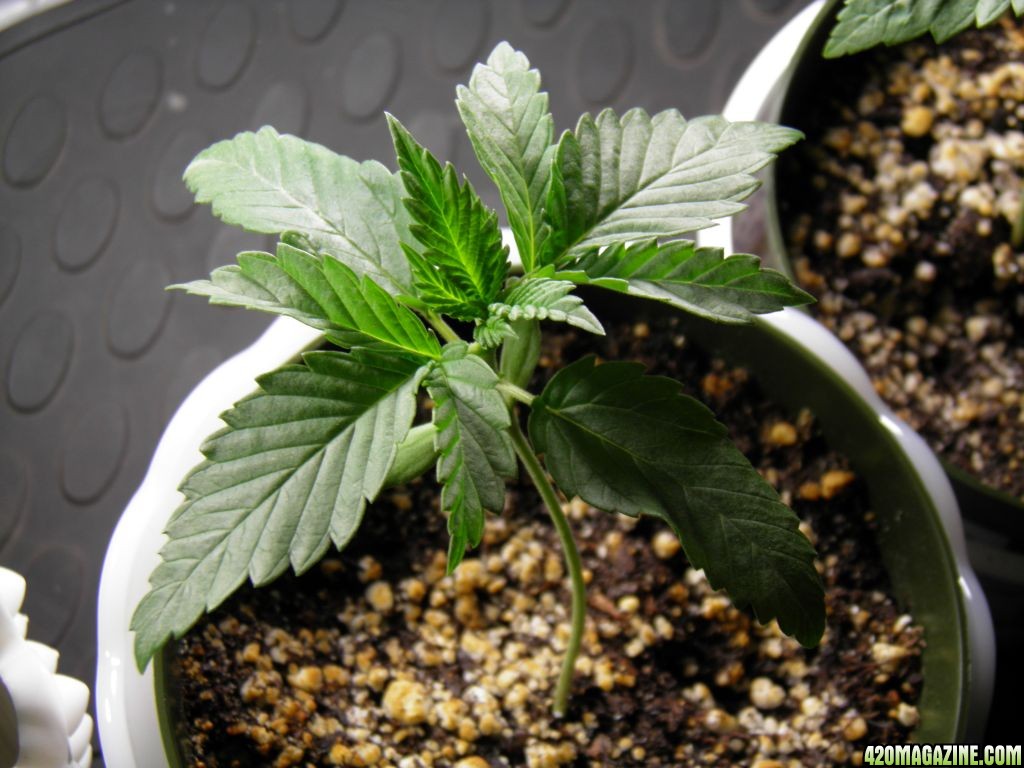 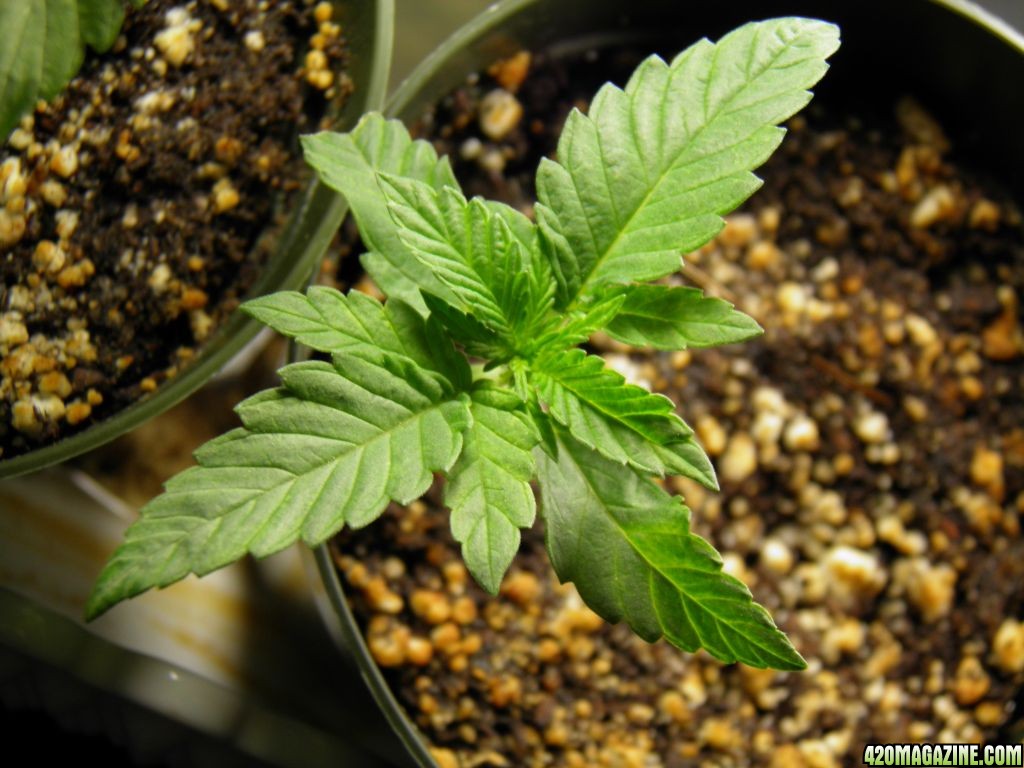 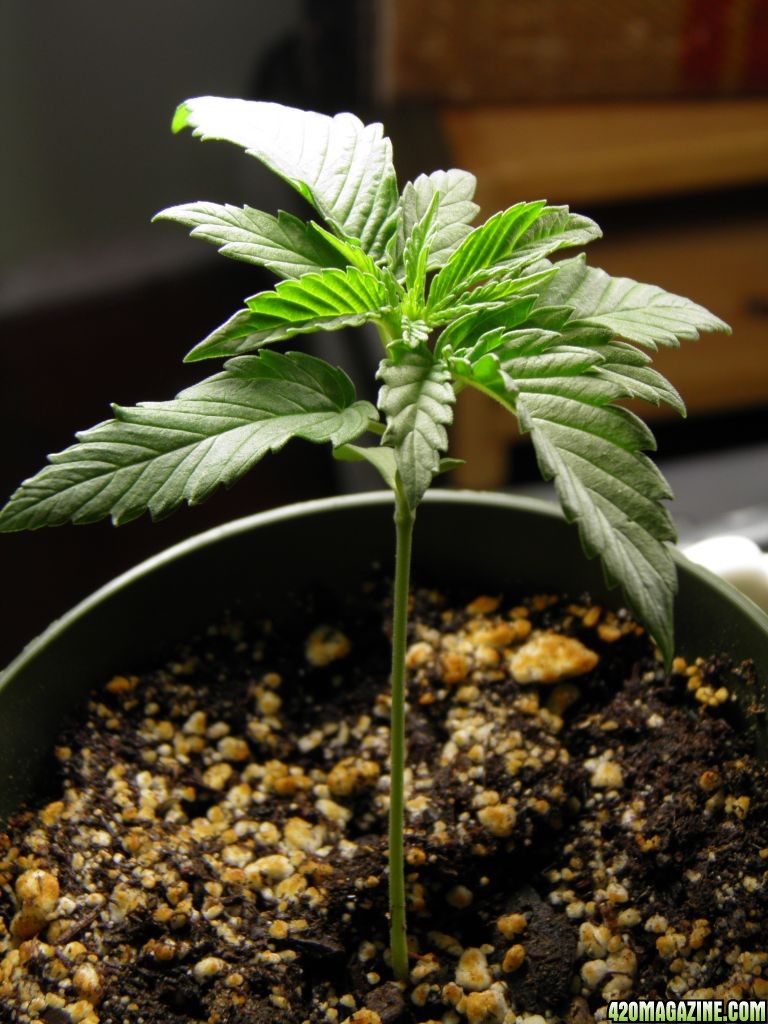 They look good... well except I see they have stretched quite a bit. Make sure those cfls are really close to the tops (which look really good). Also make sure to put a fan on those so it really wiggles them. The stems will stiffen with a good breeze.
Keep up the good work!
We have 2 ears and 1 mouth, listen twice and speak once...

They stretched when they were in the window, before I arranged them under the CFLs. When I did, they were a couple of inches away from the lights, and didn't seem to stretch any more.

Then I decided to leave them outside in the sun all day, and bring them in at night (again under the CFLs). That's what they seem to enjoy most--I guess nothing beats natural sunlight, and the wind outside has really stiffened up the stems on them.

This morning my 'Growler' arrived! Now I have to pay a visit to Home Depot to pick up the materials to build the framework that will be a grow-station of sorts. I'm not sure how elaborate it'll be, but I'm looking forward to seeing the girls under the LED. I am half tempted to keep them outside during the day (at least until they aren't quite so inconspicuous) and put them under the LED at night. It'll save some electricity, but it's not quite the grow I had in mind when I started. I may even start a couple more seeds, and have a staggered harvest. I have some Tangerine Dream (fem), too, but from what I understand the strain is tougher to grow, so I think I'll wait it out and see how this first one does and and just germinate some more Rom and SD.

That is great. good ole mother nature - nothing beats her. Just keep an on them when you bring them back in for pests and such.
I have heard that about TD as well. You will learn so much from the first grow its amazing. I love the HD you can everything there.
We have 2 ears and 1 mouth, listen twice and speak once...

Been a while since an update.

Alice had an unfortunate accident recently in which she spent the night baking up against the CFL. A few of her leaves singed, but thankfully nothing that hurt her too much.

More food again this morning. I am still using the 16-16-16, which they seem to be enjoying. The only thing I have with more N is some Miracle Grow orchid food, which I am a little reluctant to use due to the feedback I have seen re MG.

I'll update tomorrow with some new pics of the girls at 3 weeks.

At what stage would you guys recommend starting to flower? Would a lot depend on size, or is it a time issue?
Romulan/Sour Diesel, Soil Under LED
S

Here are the girls at day 21. I think I will have to get some different nutes this weekend. The ones I am using are ok, but I am sure I could do better for them. 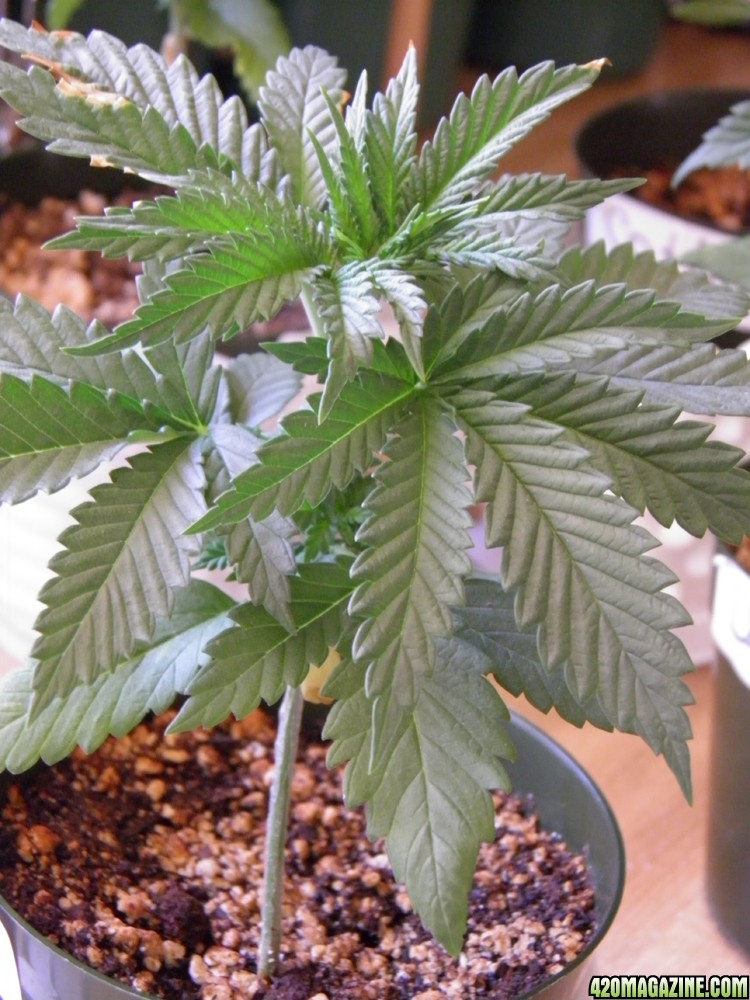 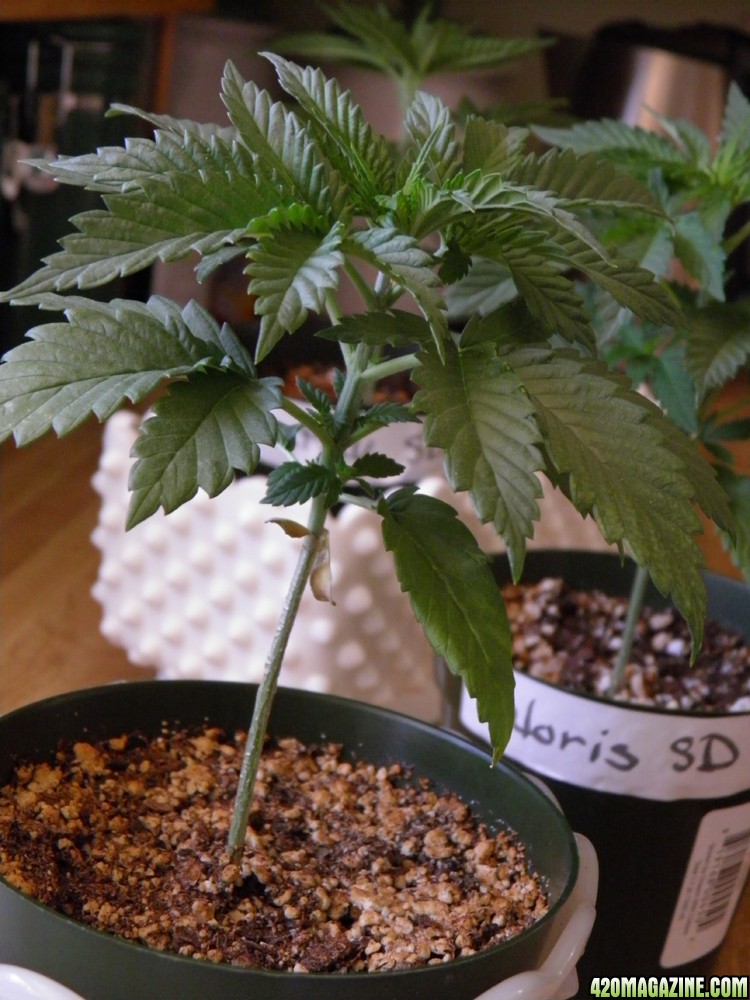 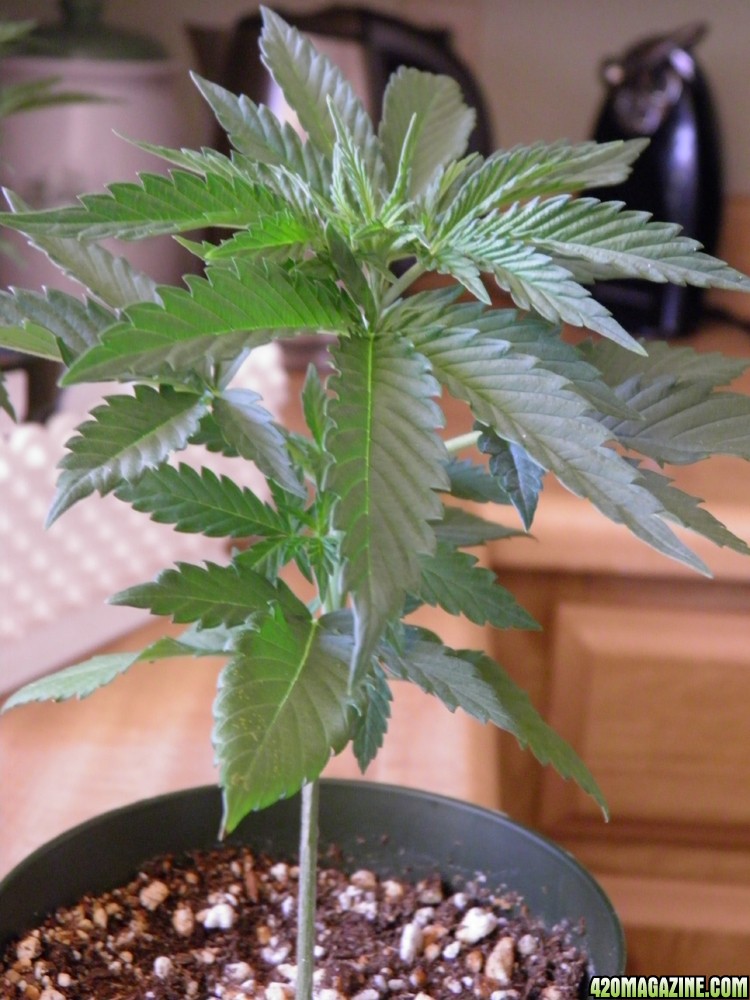 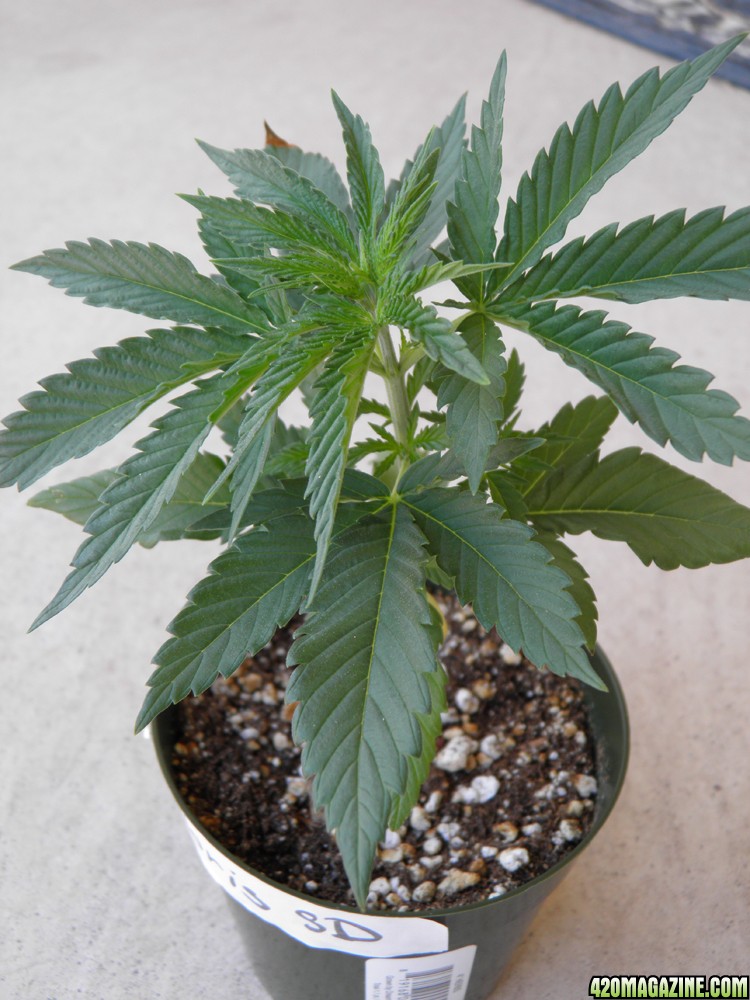 And some slightly more disturbing pics. The first is the spotting that I noticed on a few of the leaves on the girls. You can see it on some of the above pics, especially Cathy's front lower leaf, but this is a close-up. I have tried to research it and the best I can come up with is PH level issues. If anyone has any advice, I'd appreciate it. Yes, I have a PH meter and no, I don't use it as much as I should. Tonight I'll provide some levels. 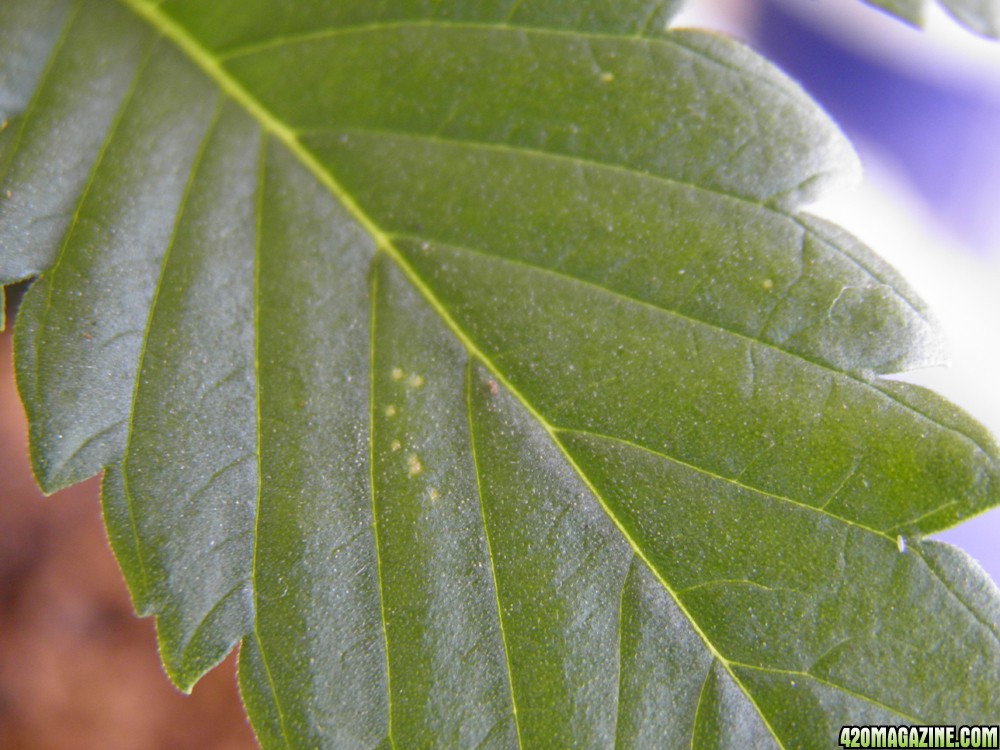 The stems seem to be peeling a little. Is this anything to worry about? They all seem to be doing it, but it is not getting any worse. 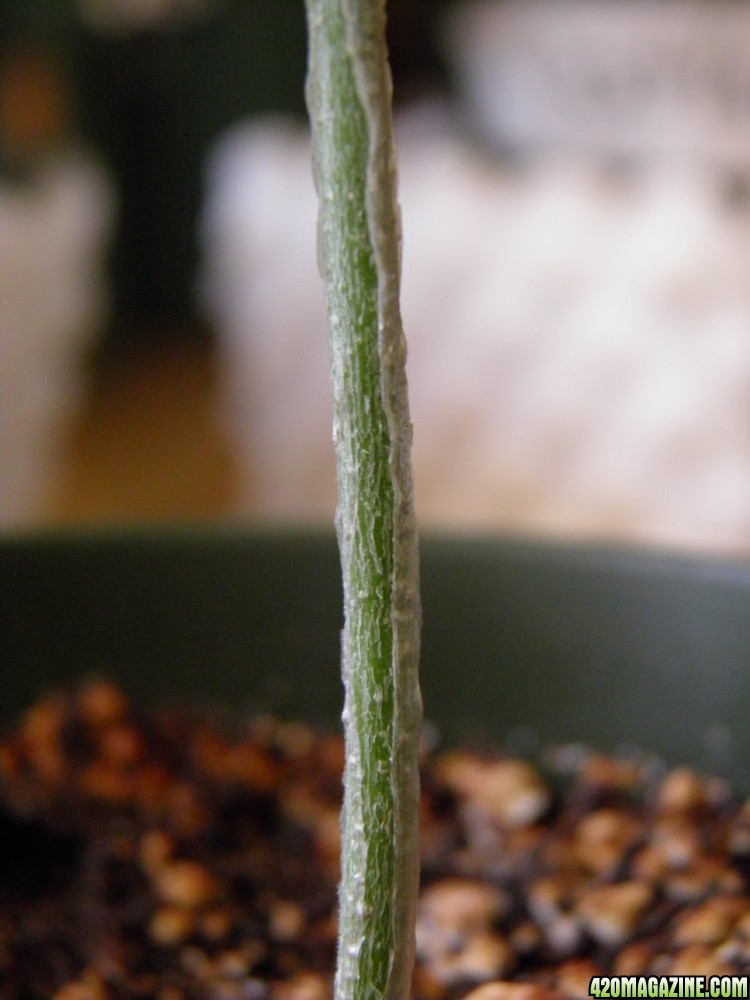 And finally, a word of advice to myself--watch the light! 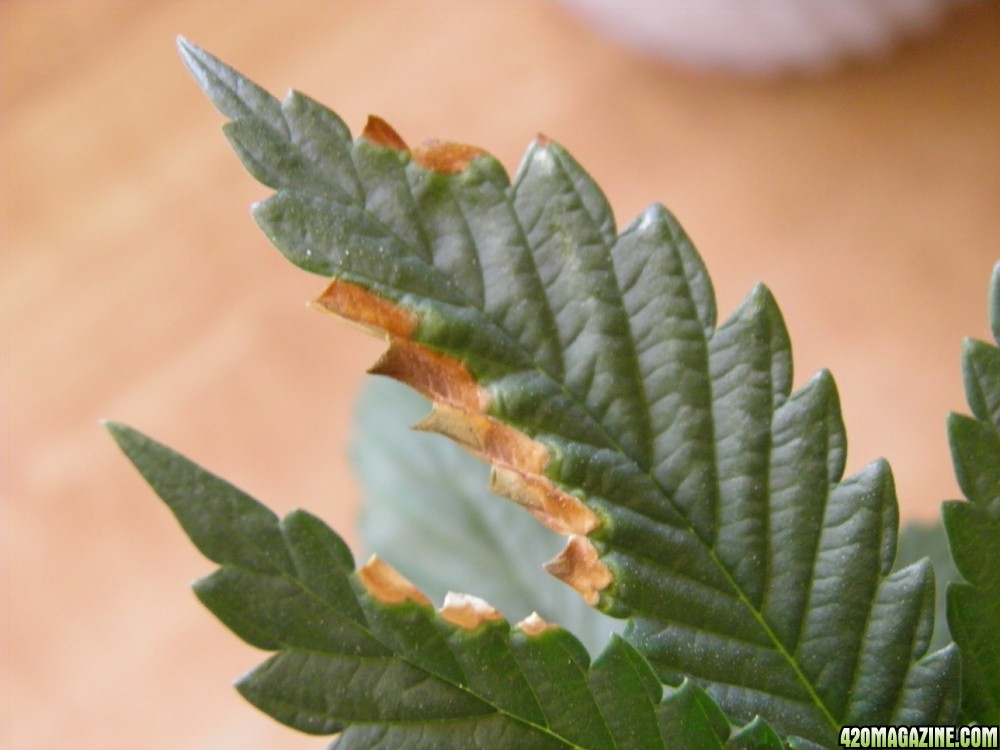 This evening I gave them a watering with PH of about 6.6, to try and bring the levels down a little. The water I have been using is a steady 7...
Romulan/Sour Diesel, Soil Under LED

Love and respect from all of us here at 420 Magazine!