Despite a state law meant to give dispensaries a firmer legal footing, about a dozen medical pot shops are in limbo in Oregon, holding state licenses that say they can operate but facing local ordinances that say they can't. Just days after the state began accepting dispensary applications in early March, a bill passed by the Legislature took effect that allowed communities to bar the shops locally. By May, more than 140 cities and 26 counties had adopted moratoriums set for anywhere from a few months to the full year the state law allows.

The state has gotten more than 400 dispensary applications. Of those, 121 have been granted, all but a handful in areas that haven't embraced moratoriums. Because of the moratoriums, nearly two dozen that were still awaiting approval have withdrawn their applications, and two that had won approval have surrendered their licenses. But at least 10 state-approved dispensaries currently blocked by moratoriums appear to be keeping their licenses, at least for now.

"We kinda gotta just hang on and see what happens," said Tammy Brown, who owns Westside Wellness in Aloha. She said she invested more than $70,000 in the facility before Washington County imposed its yearlong moratorium. Licenses are tied to locations, so relocating would require an owner to re-apply with the state. Brown worries it would be difficult to find another location with a landlord who would be comfortable leasing property for a dispensary. Steve Geiger, owner of Highway420 in Seaside, also is holding on. "The problem with getting our money back is we lose our spot, and spots are like gold now," said Geiger.

Geiger said he's leasing a space more than three times larger than he needs for what is, at the moment, just a smoke shop. He said he hoped to open the other two-thirds of the shop as a dispensary, and he plans to keep pushing the City Council to lift the moratorium. Not only do dispensary owners have to find agreeable landlords, but also their facilities must meet state requirements for security systems, video surveillance and structure. The location must be zoned appropriately and cannot be within 1,000 feet of a school or another dispensary. In some areas, properties meeting those requirements are scarce.

Bill Esbensen, owner of the 45th Parallel Group, withdrew an application for a facility in Ontario he opened in 2010. However, because the competition for suitable locations around Portland is stiffer he is keeping the approved license for a Clackamas shop that he never even stocked. He said he's working to persuade Clackamas County commissioners to end the moratorium in favor of time, place and manner restrictions that are more stringent than what the state requires. "Hopefully we can get it worked out before a year," Esbensen said. "I'm losing money every day."

At least one dispensary has opted to move to friendlier territory. The owners of the Going Green Compassion Center outside Lebanon surrendered their license after a moratorium in Linn County took effect at the end of April, but by May 31 they had set up shop and received state approval at a new facility in Albany. They held a grand opening June 8. Co-owner Sarah Whiteley said she and her husband couldn't afford to wait until Linn County lifts its moratorium. "It's turning out to be a better location for us," she said. "I was calling it a happy accident." 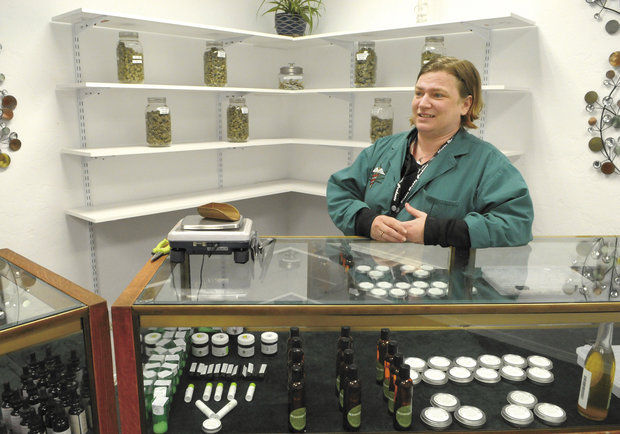