I've recently moved to the legal grow state of Massachusetts, USA. Got some seeds from the 2017 Boston CannaCon, and grow supplies from a local supply store.
This is my first grow and I've read so much that I've lost all retention of any real knowledge on how to go about this...so I'm wingin' it!

My goals are to stop overanalyzing, try to just be patient, learn, and hopefully smoke my own grown weed (and eat? if i figure out/learn/can make edibles or whatever; i'd like to be able to use the entire plant one day if that's a thing)

THE SETUP:
DAY ONE:
4 seeds were placed directly in soil today. (!!!) Started to soak them in distilled water in a covered, clean shot glass...but then after adding the soil to the planter cups I decided to just go for it. Watered the soil with distilled before and after placing the seeds in.

T5s are ~ 5 inches away from soil. Mainly for warmth. Also just to see how the whole setup feels. It's been around 77 degrees F in there, ~ 60% humidity. May leave them on for a few weeks.

Added water to an old coffee can and stuck that near the pots in a quick half-assed attempt to keep moisture in.

Fan is sucking air out and into the carbon filter. Basically to try to keep air moving in the tent, and see how it runs/sounds/well we can not bump into it. Fan and filter are vented outside of the tent, after watching some of theGrowBoss' videos on ventilation. Good stuff; brought clarity on a lot of set up fundamentals.

Washed the tent floor, pots, and planters with soap and water right before setting up.

TECHNIQUE:
May try to ScROG. May just see what happens with good ol' soil and lights.
---
posting pics soonish.

420 Staff
I will follow along! Good set up, interesting seeds, hope you are successful!

DAY 5
I've been trying to find my camera! Where is it?...!
This morning I unzipped the tent to see 2 adorably little sprouts have popped up!!!

Have been fiddling with the set up here and there.
1st night started with covering the pots with an aluminum foil lid...then ran back after realizing this was actually reflecting heat away from the f***in' seeds!...then i cut just enough foil to place a small circle on the dirt right over where the seeds were....then back to remove that dumbass idea - yeah, so my initial thought on all of this was 'keep the seeds dark but the environment warm'...then i would turn off the T5 lights...then turn them back on...then read some more cannabis literature and turn them on again...
...So, yeah...to sum up: I went back and forth with the notion of keeping them in the dark or not; but the soil provides the darkness, and once they do sprout they'll want light all the time anyway...so...in seed = lights on!
...all of this was during the course of the 1st evening of planting the seeds. by the end of the night i flustered, "i've shocked them for sure what the hell am i doing." to which my unperturbed hubby replied, "they're weeds. they'll be fine." (sound familiar, [post=3641346]UrbanAchiever[/post]?!! lol!

more web-logging!
i'm about to read up on what kind of 'nutes to start with and planing the next steps. Cyco's got a chart of their nutes and CannaCon had some freebie additives and chart timelines that i need to figure out if i can use. i'll post the plans/literature soonish.
aaaand i'll be going through everything i own again for that damn camera!

yey!
may ya'll keep up the happy and healthy grows, internet!
Last edited by a moderator: Jun 28, 2018

420 Staff
lol nice, I read that seedlings respond well to a 16/8 hour cycle, and I wouldnt feed them nutrients for at least 2-3 weeks (again from what I read here in 420 forums). Once the seedlings are established a 18/6 hour light cycle is plenty. That said do whatever you think is best, the plants wouldnt be much different in the end.
ATF x Stankberry & Grape Krush x Stankberry - Current
Advanced Cannabis Photography - Group Support Thread
vote in the contests

Day 13 from seed in soil.
SPK 4 has decided she may well join in with her sisters...but still wears her seed-hat..

Without further delay, here's some progress/setup pics!
These were taken right after i sprayed them with distilled water...so those are water droplets and not disease/pests. 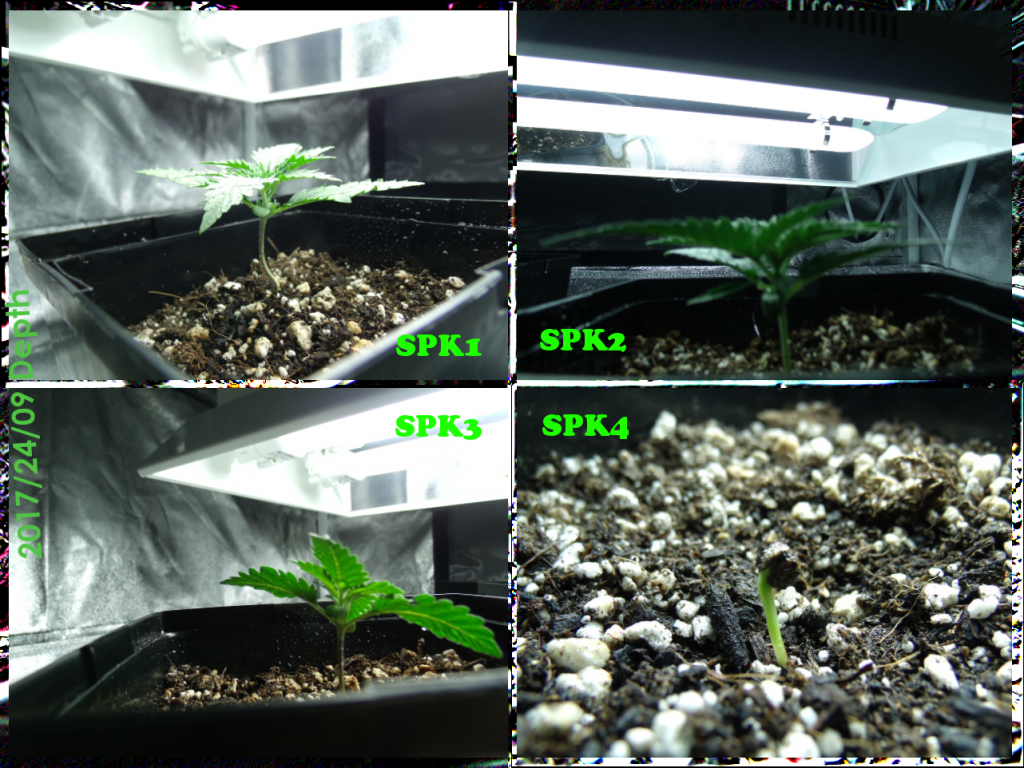 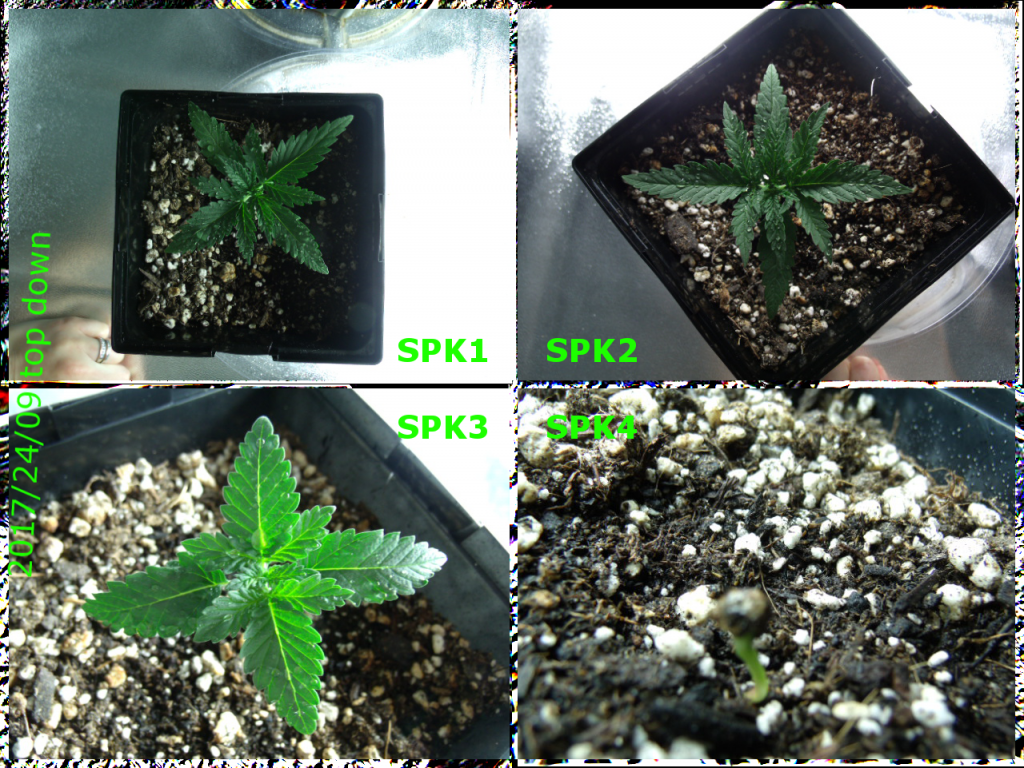 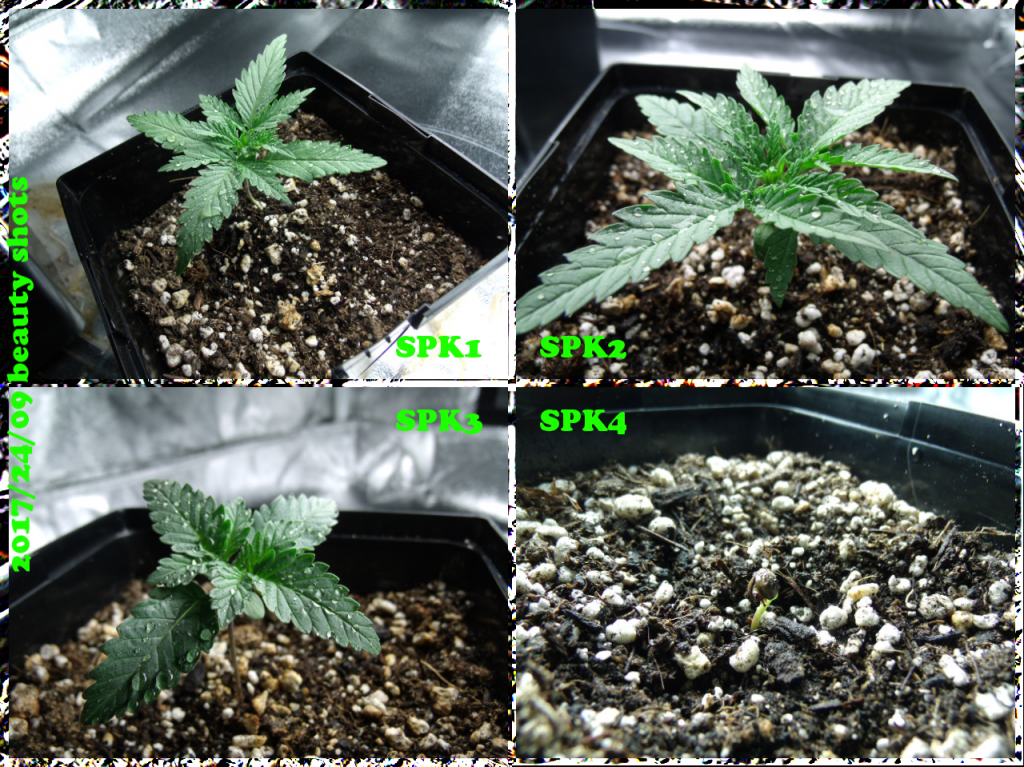 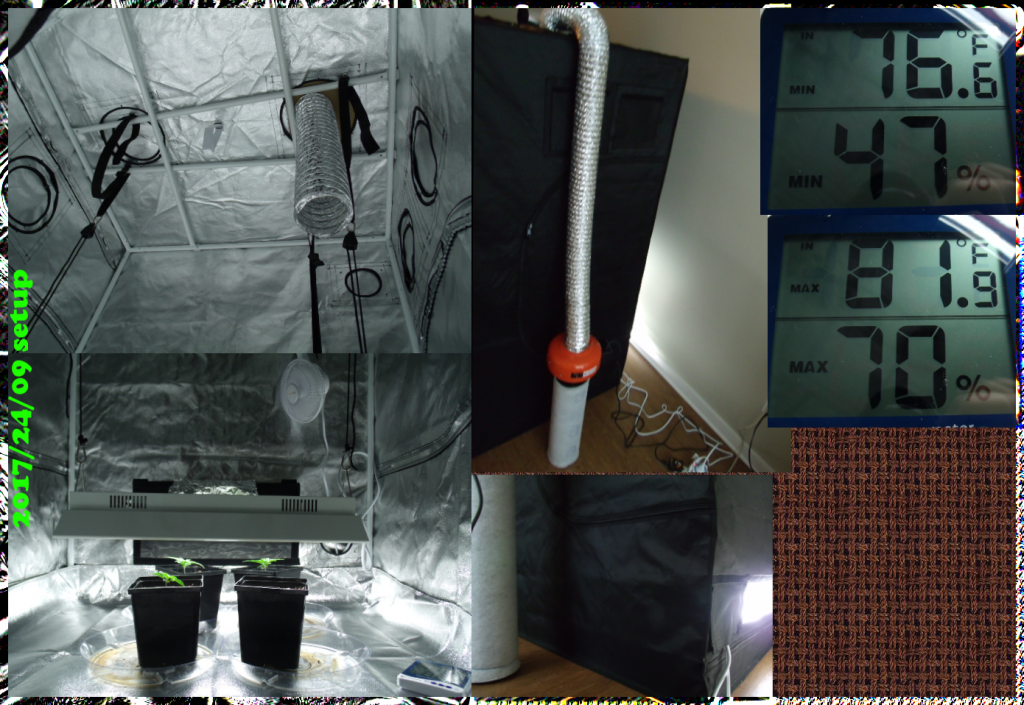 It's a unlikely event that SPK4 has made it this far...after a week of not sprouting i often dug into the soil to poke around, repositioning and stuff. Yes, i almost gave up just because i'm weary of pests...but wow!! So happy we didn't give up!

for laziness and consistancy i've kept the lights on 24/7 even though those with way more experience and know-how have advised otherwise. i'm stubborn or something. i don't know. why do i keep doing something just because i've a notion???

i completely sat inside and just read for a few for the first time the other day. :36: the tent is so well lit, it's great for reading. reading outloud is one of my favorite things to do/skill to work on, and it was nice to do so around the lil weedies.

may try to get my hands on some neem oil, sticky tape, and/or companion planting of chives/garlic for some preventive pest control. but i'm so far in debt... kinda set on living as minimally as possible now that we've got our initial move and settling-in taken care of...for the most part.

he got some purple/black weed in! so i'm gonna go relax some more...browse some more woodworking projects and enjoy the rare "free time off."

also - i have no idea how to keep this grow journal in linear order.