A group of citizens supporting the legalization of medical marijuana will gather at the S.C. State House next week.

Joining them? S.C. senator Tom Davis and state representative Jenny Horne — lead sponsors of legislation which would "create a medical marijuana program for cultivation, product testing, quality and dispensing" in the Palmetto State.

Davis and Horne's efforts have been opposed by law enforcement leaders like S.C. State Law Enforcement Division (SLED) chief Mark Keel — who apparently have nothing better to do with their time.

In fact believe it or not, Keel is actively opposing a limited cannabinoid oil measure approved last year that helps kids find relief from previously uncontrollable seizures. Davis was the sponsor of that legislation, too.

We support Davis and Horne's legislation ... of course we support the decriminalization of marijuana (and other drugs) for medical and recreational purposes. It is simply not government's purview to tell an adult what they can or cannot do (or grow) on their own time on their own property — so long as those actions don't impose on the liberty of others.

Anyway, the rally for medical marijuana will take place on Wednesday, May 20 on the south steps of the S.C. State House at 11:30 a.m. EDT. 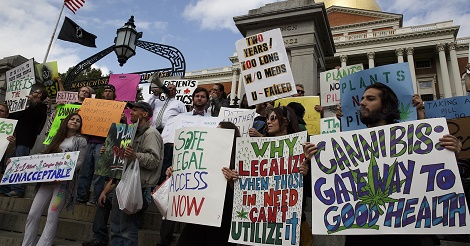 May 28, 2015
Jacob Redmond
J
J
South Carolina: Millions Could Be Made Off Of Medical Marijuana