Going to start the new year off with a bang this year. To kick off the growing season, we will be growing out two strains that were offered to us by the seedbank sponsor @Dope-Seeds.com . Well let me tell ya a little about what will have going on here.

We will be growing these two strains out in our homemade organic soil, nicknamed Stank Soil, and those will be water only 95% of the time with an occasional aerated compost tea (ACT) or a top dressing or two done at strategic times. For anyone interested in the soil recipe, please feel free to ask, I will gladly share.

I will be growing these indoors initially, though if I see anything that looks interesting I will take a cut and include it in the outdoor grow. Indoors the plants will begin life in a 2'x4' tent under a Fluence Razr3 LED. They will stay there for the first 20-30 days of their life before moving into the 4'x4' veg tent which is powered by some Nextlight LEDs. For flowering they will get moved to the 5'x5' flowering tent.

None, I grow in a living organic super soil.

This is the one area I am working on tweaking for better control. I will be doing this grow in our basement, where the temps are slightly less than optimal. The basement temps are on the low side, 55 degrees, with the tent temps holding about 65 degrees. I would love to squeeze another 5-10 degrees warmth into my environment, but until we get to building the finished grow-room space the plants will just have to make due. RH is my lone bright spot. Being in the basement, with a really good automatic dehydrator, I maintain a RH in the 55-60% range. Tents will spike up a bit at night but I move a lot of air, with both my exhaust fan (which is admittedly turned down a bit in the winter time to help retain heat) and with a box fan and tower fan in the tents. 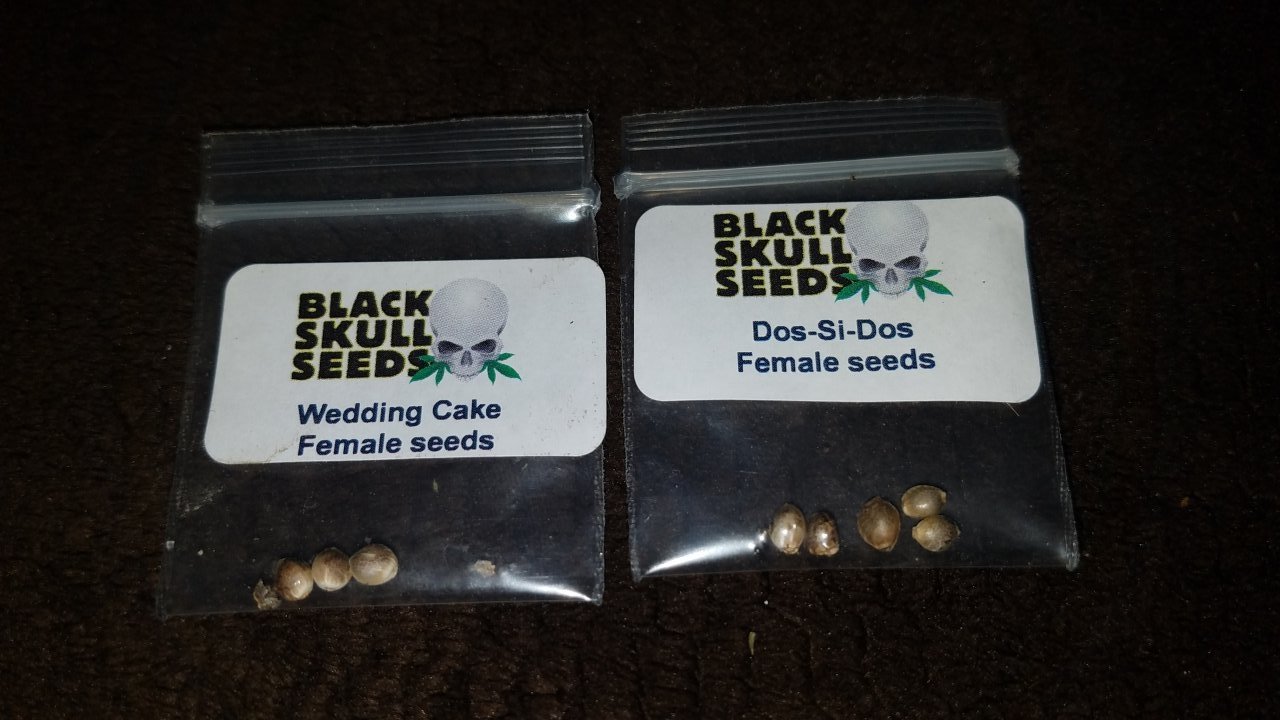 These strains were listed as testers from BlackSkull Seeds and don't include any additional information on them. Both strains are very popular currently in the United States legal cannabis market but there is a bit of differing information on the genetic history so I won't post any of that without knowing firsthand what genetics were used.

Dos-Si-Dos - Generally listed as an indica dominant 70/30 split and is listed in the 8-10 weeks range for flowering times depending on phenotype.

Wedding Cake - Generally listed as indica dominant 60/40 split and is listed in the 7-9 weeks range for flowering times depending on phenotype.

Seedling will be grown in clear solo cups (allows me to monitor root health and growth early on and better gauge best time to up-pot) which are set inside of red solo cups for protection against the light.

I generally like to run (6) 5 gallon pots in a cycle. I will be dropping three Wedding cake and three Dos-Si-Dos in hopes of running that 6 plant set up. If there are any germination issues, I will drop the remaining two Dos-Si-Dos seeds to bring that count up.

If anyone has any additional questions pertaining to my setup or grow, please don't hesitate to ask or reach out via PM. Looking forward to a killer grow to kick off the New Year. Happy New Year folks!!!

"Its better to remain quiet and let people think you're a fool, than to open your mouth and remove all doubt"

I can't wait to see what you can do with these new strains! Last ones were looking super frosty! Will be fun to watch!! Happy Smokin'
When we stop resisting what is happening and simply embrace it without trying to change it or hold on to it, we can remain in the childlike flow of being. By Emma Seppala

It is preoccupation with possessions, more than anything else, that prevents us from living freely and nobly - HDThoreau

May you be as high as you want, but never want to be high! - Anon.

"In the desert, you can remember your name. 'Cause there ain't no one for to give you no pain" Dewey Bunell

"Music is the best." Frank Zappa

"....let's get together and feel alright." Bob Marley

Evening folks, we are back again. I figured I would take this chance to share a trick I do to avoid something most growers have done at some point......drop multiple strains and not label them. I have done it multiple times and this is my trick now. I tape something to the dish that will help keep me from forgetting which is which. 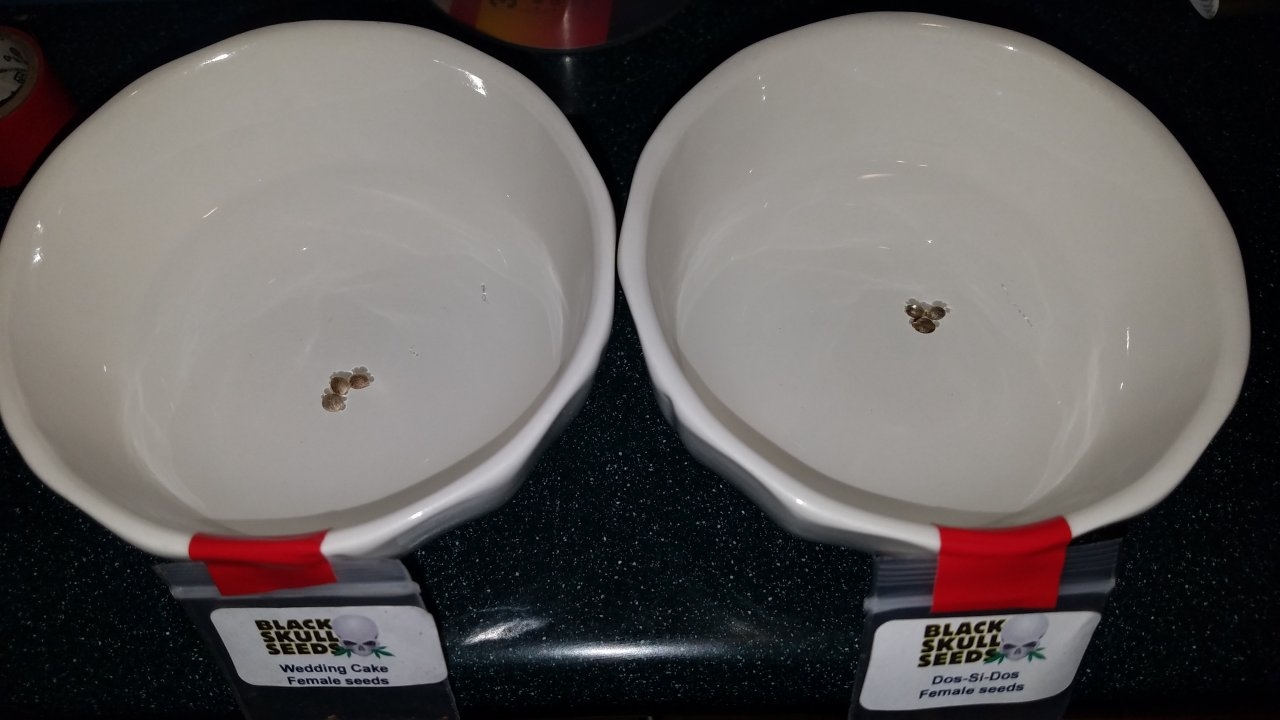 "Its better to remain quiet and let people think you're a fool, than to open your mouth and remove all doubt"

Pennywise said:
I’m in for the grow show Van!
Click to expand...

Hey Penny! Good to see ya!

I can't wait to see what you can do with these new strains! Last ones were looking super frosty! Will be fun to watch!! Happy Smokin'
Click to expand...

Fredwak said:
I'm in V! Happy new year. Im in!! My Wedding Cake clones all passed on so ill watch yours grow instead.
Smile and stay stoneder
Click to expand...

Welcome Fred! This will be my first go with either of these strains so I am pretty excited. I grew Black Skull Zkittlez last year which was a big hit and I have their Gelato going in my perpetual journal which is a beast so I'm looking forward to these!
"Its better to remain quiet and let people think you're a fool, than to open your mouth and remove all doubt"

I'm in for whatever you get up to! It's gonna be good no matter what happens.

You cannot flush nutrients from your buds! Click the two links below for the science:
#noflushclub link 1 • #noflushclub link 2
PERPETUAL...Candida, Chiquita Banana, Jack Herer, Sour G. Come for the banter!
Do we need to pH adjust our nutrient solutions?
Low Stress Training (LST) - a tutorial
Supercropping - The Hows and Whys
Aeroponic cloning bucket - The Cloninator - build your own!
Rice Balls to Quickly Lower RH in Jars
Great macro pics for under $10

Van Stank said:
drop multiple strains and not label them.
Click to expand...

Hi Van, I just harvested a couple of those.

I'm here for the grow show

Hey there Stanks, I’d like to sit in on this one if I may. Couple of heavy hitter strains to be sure, and I’ve seen what you can do with your stank soil. Should be an exceptional crop!

DIY peace pipe from plant stalks
The Cure For 99% of plant problems
420 contests
Chef’s Kitchen: Come cook with me!

Subbed in and brought some poofs.

This will be my first ride on the Stank wagon.

Derbybud said:
Subbed in and brought some poofs.
Click to expand...

Mr. Sauga said:
This will be my first ride on the Stank wagon.

Welcome aboard Sauga! Always nice to see a new face to the neighborhood!
"Its better to remain quiet and let people think you're a fool, than to open your mouth and remove all doubt"

I'm here to watch and learn...

Pulling up a chair and lighting one up
3rd grow:TimHomeagrow G13 Haze and Majin Buu in soil

Got some of these to do myself once I have some space. Looking forward to the show.
Vetsmoke85 Grows With A Trio Of Sponsors
420 Magazine's Official Girl Scout Cookies Comparative Grow By VetSmoke85
Testing the ViparSpectra XS1000 with VetSmoke85
NEW XS1000: Exclusive 10% off code for 420
Amazon Code: lt10420m
XS Series XS1500/XS2000/XS4000
Exclusive 5% off code for 420
Amazon Code: ltXS420m
420 Contests
Welcome New Members - Please Read Before Posting

Ready to tag along!
Farmer R.

The Fat Ladies in the Cathouse​

PCaddict said:
I am in on this show if you dont mind.
Click to expand...

Welcome PC! Glad to have ya!

Feel free to PM me any questions or swing over to the "Stanks Switch it Up in 2019" (kinda our continued perpetual grow) and ask any questions over there. I don't want to go down a rabbit hole on our soil in a sponsored grow. Don't want to seem like I am doing any self promotion LOL.

Oh and welcome, glad to have ya here! Hope we can all learn a little something! If ya ain't learning, what are ya doing? (In my mind, If I ain't learning.....

I gots to be getting dumberer right?)


Glad to have you here brother! Otters are always welcome on the Stank Wagon!

Timhomegrow said:
Pulling up a chair and lighting one up
Click to expand...

Happy New Year Smokes! Hope we can put on a great show for you guys!

Got some of these to do myself once I have some space. Looking forward to the show.
Click to expand...


Hey Vet, been meaning to make way over to find one of your threads. I'm an old retarded...err...retired Jarhead. Figured with your name there might have been something interesting over your way. Welcome! Let us know when you start yours up!

Farmer Reading said:
Ready to tag along!
Click to expand...

Hey FR, great to see ya bud! Welcome aboard!
"Its better to remain quiet and let people think you're a fool, than to open your mouth and remove all doubt"