State Puts Legalizing Medical Marijuana Back On The Table

Gov. Andrew Cuomo earlier this year announced plans to decriminalize low levels of marijuana, in an effort to reduce the number of unnecessary stop-and-frisks and the chances a young person might wind up with a criminal record.

However, as Albany this week begins a renewed effort to pass legislation legalizing medical marijuana — a bill that already has passed in the Assembly but stalled in the Senate — Cuomo has offered very little support, reported The Buffalo News.

Marijuana has long been indicated as an effective pain reliever for more than 250 diseases and chronic conditions, from cancer to glaucoma to multiple sclerosis.

If the legislation passes, New York will join 18 other states in allowing doctors to write marijuana prescriptions for certain patients, who could then obtain the drug in limited supplies from state-controlled agents.

When asked last week whether he was sending mixed signals around the two marijuana policies, Cuomo said no.

"The two issues are completely separate and distinct," said Richard Azzopardi, a spokesman for the governor.

Mike Long, GOP party chairman, said his group is staunchly opposed to legalizing medical marijuana. He called it a gateway drug and said the state would be sending the wrong signal to young people if were decriminalized.

However, upstate New York resident Joel Peacock uses marijuana to relieve pain for his own medical condition blames the governor's reticence around legalizing it for medicinal purposes on the state's ties with the pharmaceutical industry. He said the industry would suffer an enormous loss if patients opted for marijuana use over the more expensive prescription pain killers.

"Let's forget about the politics. This is about people in pain," Peacock said. "It's got nothing to do with people being liberal or conservative or Democratic or Republican. It's to help people." 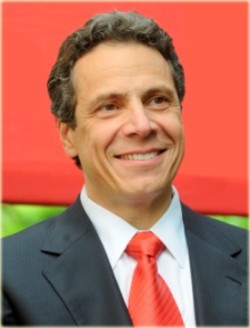 If the legislation passes, New York will join 18 other states in allowing doctors to write marijuana prescriptions for certain patients, who could then obtain the drug in limited supplies from state-controlled agents.

Didn't know Dr's could write prescriptions for cannabis only recommendations for it. Words are ever so important and people butchering them every day as in assault weapons and not SEMI-AUTOMATIC guns for which they are. Cannabis has no medical use? What stone are they living under?
G

Given that the article stated that NY has ties to the pharmaceutical industry, it sounds like a lot of the reason marijuana isn't legal there even on a medical bases is the money it would cost big pharma. I wish everything would stop being about money and greed and that instead some people would focus on helping their fellow human being instead of everything being about money and greed.
RIP BILL HICKS
RIP KURT COBAIN
RIP HUNTER S. THOMPSON
RIP JACK KEROUACK

T
State Puts Legalizing Medical Marijuana Back On The Table

J
New York: On The Path Towards Marijuana Legalization