A Senate committee unanimously approved a bill Monday to let Florida farmers grow hemp for industrial uses in a wide range of products - but not for getting high.

Sen. Jeff Clemens, D-Lake Worth, said his bill would create jobs and create a major cash crop. But he said the type of cannabis used for hemp production is low in THC, the element that produces euphoria for smokers, but high in fibers with uses in food, beverage, cosmetics, textiles, paper, insulation and other materials.

“Let me start off with what this bill is not, so everyone understands,” Clemens said. “This is an industrial hemp bill. This has nothing to do with production of marijuana, medical marijuana, in a psychoactive form.”

Sen. Bill Montford, D-Tallahassee, who chairs the Senate Agriculture Committee, expressed concern that the hemp bill will get confused with a stalled measure that would authorize prescriptions for medical marijuana. A constitutional amendment last November drew 57 percent support for allowing medical uses of smokable marijuana, just short of the three-fifths required for all ballot initiatives.

A proposal to do the same thing legislatively has not moved in the first half of the legislative session, and appears unlikely to be revived. Organizers of last year’s petition campaign are gathering voter signatures for a rematch on the 2016 ballot.

Clemens and other supporters of the hemp proposal repeatedly stressed that they are not talking about recreational or medical smoking of marijuana. If it passes, the proposed “Hemp Industry Development Act” (SB 902) would let Agriculture Commissioner Adam Putnam register growers and regulate hemp production permitting production of nothing with a tetrahydrocannabinol content higher than .3 percent.

Engineer Bob Clayton of Tarpon Springs, who used hemp materials in building a house, said hemp could be a $200-million cash crop for Florida growers, becoming the state’s fifth-largest agriculture product. He said hemp is an excellent cover crop for fields, improves soil and provides wind and pollen barriers for berries and other small ground crops in adjoining fields.

The fiber could even be used to make oil skimmers to clean up after offshore spills, he said, and hemp has great nutritional value. But Clayton said discussion is taboo.

“Hemp is a four-letter word in the American classroom,” he said. “I’m not allowed to go to your child’s classroom and tell them out it.”

He said a 1937 law forbids mention of hemp in school textbooks about farming, food and building materials.

No one testified against the bill, which still has committee stops in the criminal justice, regulated industries and appropriations committees. Rep. Michelle Rehwinkel Vasilinda, D-Tallahassee, has a companion proposal (HB 363) in the House, but it has not been heard by any of its four committee assignments yet.

Besides being far lower than marijuana in THC content, he said hemp is bred for the fiber in its stalk, not its leaves and buds. He said 29 states allow some form of hemp production, and that it is used in many products.

“Somebody is making a profit off of those products, and it isn’t Floridians,” he said. “What we’re trying to do is give our agriculture community another option to be able to grow a crop that will be used in a variety of products that have already found their way onto shelves in stores all over Florida.” 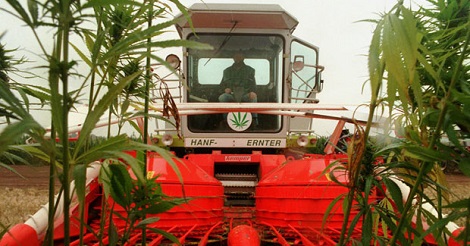