States Voting On Marijuana, Medical Or Recreational, In November

Marijuana legalization is having a moment. What once seemed like an unlikely proposition is now catching serious steam.

To date, 25 states and the District of Columbia have legalized medical marijuana, while Alaska, Colorado, Oregon, Washington state and D.C., have legalized recreational use of the drug.

This fall, voters in nine states will decide whether to make weed legal - five recreationally and four medically.

From a public health standpoint, the effects of legalization are unclear. The American Public Health Association generally supports both medical and recreational legalization but acknowledges it doesn't yet fully understand the impact on one's health and advocates for heavy regulation of the industry.

How the states regulate the exchange, usage and sale of either recreational or medical pot, however, varies in each state.

Here's a map and a breakdown of each state's pot ballot initiative - and its likelihood of passage.

States Voting on Marijuana in November

This measure would let Arizonans have six plants in their home and would impose a 15 percent tax on the sale of the plant from facilities that are "licensed and regulated." Similar to other states that have legalized weed, the tax revenue Arizona generated would go toward health and education initiatives.

Unlike other states, though, it would establish a new agency called the Department of Marijuana Licenses and Control. The other states with legal marijuana have just created new pot-focused offices within existing departments - like public health, revenue and agriculture.

Supporters of the bill have outraised opponents 3 to 1. But the Arizona Republican Party came out against recreational marijuana, which could be significant in a reliably red state. Voters in the state did, however, legalize medical marijuana in 2010.

In July, opponents of the measure filed a lawsuit, arguing that the ballot language is vague and doesn't inform voters exactly what they're voting for. A judge, however, dismissed the case earlier this month.

Out of the five states with recreational marijuana on the ballot, California is arguably the most likely to pass it.

The state was the first to legalize medical marijuana back in 1996. And this isn't the first time California voters will have pot questions on their ballot: A decriminalization measure appeared on the ballot in 1972 and full legalization in 2010. Both were narrowly defeated.

But it appears that Californians are now ready for recreational pot. Polls show support for the measure is around 60 percent, and supporters have massively outraised opponents: They have $11 million cash on hand compared to just $186,000.

The initiative would enact a 15 percent sales tax along with a cultivation tax of $9.25 per ounce for flowers and $2.75 per ounce for leaves sold in state-regulated retail outlets. It also claims it will "reduce criminal justice costs by tens of millions of dollars annually."

Interestingly, opposition to legalization in California is largely based on fears of "big business" overtaking small marijuana farmers - an issue that the ballot measure addresses by restricting big businesses from obtaining licenses to sell for five years.

Recreational pot's path to the ballot in Maine has been a bumpy one.

During the initial review of the more than 99,000 signatures turned in to the state, 31,000 were deemed invalid by Secretary of State Matt Dunlap. That put the number of valid signatures at around 51,000 - just shy of the 61,123 needed to make the ballot.

But a state court demanded Dunlap to take another look - and he found 62,848 valid signatures.

Still, getting the popular vote from Mainiacs could be tricky. Polls show a tight race, with about 54 percent in favor and 42 percent against the measure. And state leaders from both sides of the aisle - including Republican Gov. Paul LePage and Democratic Attorney General Janet Mills - have come out against the measure.

If it does pass, it will allow adults to buy and possess 2.5 ounces of marijuana and grow a limited number of plants in their homes. Retailers would be able to sell it with a 10 percent sales tax - but only with municipal approval, a first for marijuana laws. Revenue generated from the tax would go to school construction.

Massachusetts will undoubtedly be a state to watch.

There have been six different polls conducted - four supporting legalization and two crushing the attempt, but all show a close race. The average of all six polls show Massachusetts voters narrowly supporting recreational marijuana 48 percent to 42 percent.

But voters aren't the only ones divided on the issue.

If approved, residents would be allowed to grow marijuana and buy it from licensed retail outlets. Only one ounce would be allowed in public and up to 10 ounces - or six plants - allowed in homes. Retail marijuana would be subject to the state sales tax on top of a 3.75 percent excise tax, which would fund the Marijuana Regulation Fund. Colorado is the only other state to add an excise tax to recreational marijuana, at a hefty 15 percent.

Historically, marijuana legalization supporters have had a good track record in Massachusetts. Voters approved a measure to decriminalize possession of small amounts in 2008 and approved a medical marijuana initiative in 2012. Each measure gathered around 63 percent of the vote.

The state that's home to Sin City may be removing a 'sin' come fall.

A local news poll shows support for the measure at around 50 percent, with 41 against and 9 percent undecided. The supporters have also massively outraised the opposition because the opposition hasn't raised any money. According to the Nevada Secretary of State's website, the Coalition Against Legalizing Marijuana has no cash on hand.

If passed, the state will allow the recreational use of up to one ounce of marijuana from licensed retailers but prohibit pot shops from opening near schools, houses of worship and child-care facilities - rules similar to Alaska, Oregon and Washington's. With a 15 percent excise tax, revenue generated from sales would going to education.

If voters approve, Arkansas would have the most sweeping medical marijuana law in the South.

The only other Southern state with such a law is Louisiana, but it only allows doctors to "recommend" medical marijuana, so patients still have to purchase it in another state.

The ballot measure would let the Arkansas Department of Health take the reigns and require patients to have a state-issued medical ID card to obtain a prescription. But the list of chronic and debilitating conditions eligible for one is long. It would also allow patients living more than 20 miles from a dispensary to grow their own plants.

A poll conducted by Hendrix College, an Arkansas liberal arts college, found a surprising amount of support in the traditionally red state: 58 percent for, 34 percent against and 8 percent undecided. A similar measure in 2012 only narrowly lost, 51 percent to 48 percent.

But supporters shouldn't get too hopeful because the measure so far hasn't gotten any backing from the state. In fact, the state's Department of Health, Chamber of Commerce and Farm Bureau all oppose the measure, and Gov. Asa Hutchinson said he thinks it could be a "tax drain on the state."

Just two years after voters rejected medical marijuana, Floridians will be faced with the question again.

In 2014, a medical marijuana ballot measure actually won a majority of the vote - 57 percent - but the state requires ballot measures to clear 60 percent to become law.

This year, it's looking like the outcome will be different. To date, there have been 10 polls conducted in Florida, with the average showing 70 percent in favor, 22 percent against and 7 percent still undecided about whether to legalize pot for medicinal purposes.

If passed, it will allow patients with conditions like cancer, PTSD, glaucoma and HIV to receive marijuana as treatment. The Florida Department of Health would regulate the production and distribution of patient ID cards.

Montana has an interesting history with medical marijuana.

The state's voters approved it over a decade ago, in 2004, but the legislature repealed it in 2011 after the Drug Enforcement Agency found that medical marijuana businesses were involved in drug trafficking and other crimes.

This year's ballot measure hopes to bring the treatment option back and also repeal a former clause that limited the number of medical marijuana patients to three per provider.

It's tough to say how Montana will vote.

The Democratic candidate for attorney general and the Bozeman city commissioner have both come out in favor of bringing legal medical marijuana back to the state. But Safe Montana - the opposition campaign - has outraised the supporters $124,000 to $55,000

This is North Dakota's second go-around attempting to legalize medical marijuana through voters.

In 2012, a measure failed to make the ballot after hundreds of the 13,500 signatures submitted were invalidated.

The new initiative would allow medical marijuana to treat debilitating conditions like cancer, AIDS, epilepsy and ALS. Patients would need to obtain ID cards through the Department of Health.

A poll conducted by the University of North Dakota found the winds in favor of medical marijuana proponents, with 47 percent for and 41 percent against. 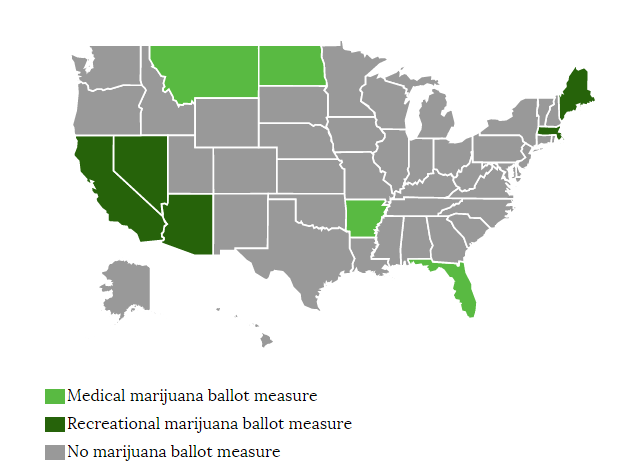 Do you know the law in WV? Curious.

K
CA: Recreational Marijuana Shops - To Tax Or Not To Tax?