My sole purpose of posting this is to broadcast my positive experience with beneficial microbes in my hydroponic water chilled dwc setp. heres some facts, and lets get on with my story. Hope to save people some time and effort and of course money.


I have experienced the power of beneficial microorganisms. I was aware of compost tea, but disregarded it in lieu of my synthetic GH lineup. It all started when there was a power outage.

So the power goes out, my DWC setup is running steady at 63-65 degrees water temp, sterile res bleach 30ml/100gal in system, 10ml top off every day. Water is not gassy with chlorine, plants responding well, roots looking great. I am a strong believer in sterile res. I wake up the next morning when the power comes back on at around 6 in the morning, scurrt. Real scurrt! water temps are at 78 degrees, and when I lift up a tote lid, a nasty smell I recognize well enough to know, I needed to hit the webernets.

I read Heisenberg's Microbe tea threat for recovering from root rot a while ago, went back to it, and decided to stay with my bleach setup, and change my top off to 70ml first fill, 25ml/day. I also decided after reading various threads to fill a bucket, do a 10% or so peroxide dunk solution, and dunk my 6" net pots in and out to rinse any debris...
the roots were: dark brown, earthly smelly but in a bad way, obviously a bad infection. Also yellow/brown slime snot algae whatever you want to call it, thats what I had. I believe the "slime" exists mainly with people on well water, ie: me. It exists no matter what, and I decided to fight nature with nature, that's later. anyways..

Removed any loose roots by simply pulling down, anything loose would be taken off. I was left with basically the main root shoots, usually more than 4 and less than 10-15 coming out the bottom, without any fibrous activity. just shoots. peroxide bath. everything is clean and rinsed off now... back into the system.

Sterile res, 400ppm, the plants look like they are shocked and stunted. It appears that all plants stopped uptaking nutrients and were draining lower leaves, although growth shoots look stunted and halted.

I bought a bottle of Roots Excelurator, House and Garden. I knew I would eventually buy it to try it, so I decided to throw even more money in my reservoir on these fried plants, right?!

Then it all started.

I dropped it in the reservoir, in both 2k identical rooms by the way, and the next day the plants responded. I notice a slight perk in the consensus of plants, some more than others, but overall positive ground. My roots had a soap-covered appearance with no bubbles, and there was a light brown slime that I really made sure was different than brown snot algae. When I would try to strip it from roots, I noticed it was not a slime, but a fibrous membrane that surrounds the roots and when underwater, I can see how this is beneficial for roots to have a membrane-like coating that traps... things. Also my water was a cloudy brown and had maybe 3" of visibility. But plants looked better than before. moving on.

I researched RE by H&G. It contains a proprietary hormone which no other rooting compound widely sold in stores contains, as well as a concoction of microbial innoculant. This turned me on to EWC tea, Humus tea, compost tea, Microbe tea, whatever you want to call it. I immediately went to the local grow shop, purchased Ancient forest Humus, Earth Worm Castings, Hydroguard for Bacilus bacteria, Green Hydro Michorryzal fungi and more innoculant was given as a free sample (Whoo!), I was prepared to fork out for great white. My goal was to dive into Microbial synergistic growing with my DWC tea, and although my wallet wasn't as prepared, my plants will eat lavishly before I will eat lavishly. and an air pump/ stones, molasses and brown sugar was added.

I start my brew in a pantyhose sock just like everyone on youtube,
Within 24 hours I have a frothy sweet smelling brown mixture. I add this to my system which now has been running for 24 hours with fresh water and 400 ppm 1-1-1 ABC GH nutes with nothing else but Roots Excel and Rapid Start. Plants look ok, altough no "growing". no sign of being over the hurdle, I am hoping for roots to "wake up" although they look bad enough to not be alive.

The next day March 10 2016, I notice the roots are all completely covered in a layer of this brown slime looking stuff, but when I pulled some off the roots, I noticed it had a consistency like dirt, not like slime at all.
New root growth is happening around the side of the net pots, which before roots were only going straight down. This new growth also contains such microhairs that were non existant in my sterile setup before, which resulted in long stringy root growth with no FISH BONE.

Today, the 12, my plants growth shoots are exploding, which were previously completely fried and looked dead, the plants were just skeletons, stripped down to the bare shoots and only leaves with green growth were kept. most fried leaves were taken off. They showed no signs of recovering until adding the brew.


I believe my system would have never recovered completely from the nasty invader infection, and due to the beneficial microbe innoculation culture i brewed up, the bad infection couldnt resist the dominating beneficial microbes coming in and taking over. There is an amazing health and good vibe around my room now, and the plants look happy, and growth shoots are perked up, like the plants never died. disregarding the rest of the skeleton of the plants...

I am also a huge proponent of roots excelurator as the best growth additive on the market. period.

here are my roots recovering from a bad slime outbreak that progressed for only 3-4 days, through bleach treated water. the microhair and fishbone effect now exists in my once sterile garden, 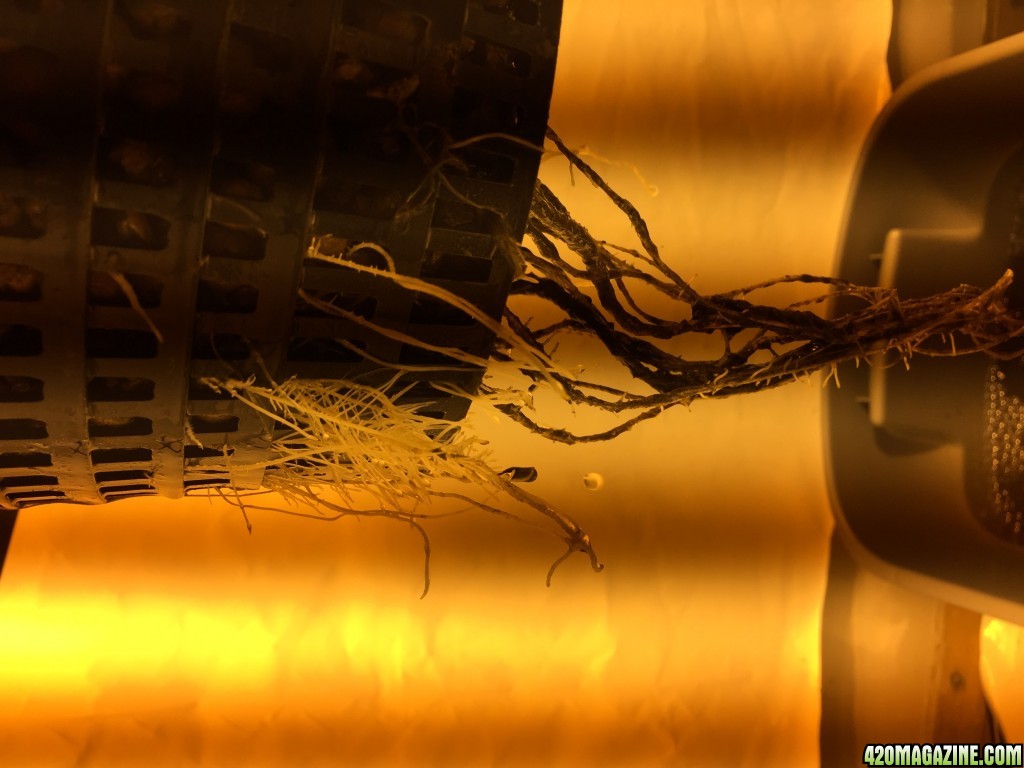 This picture includes the old existing roots producing new white fishbone shoots out the side, proving roots do recover. So don't cut them off unless you've had a serious infestation! 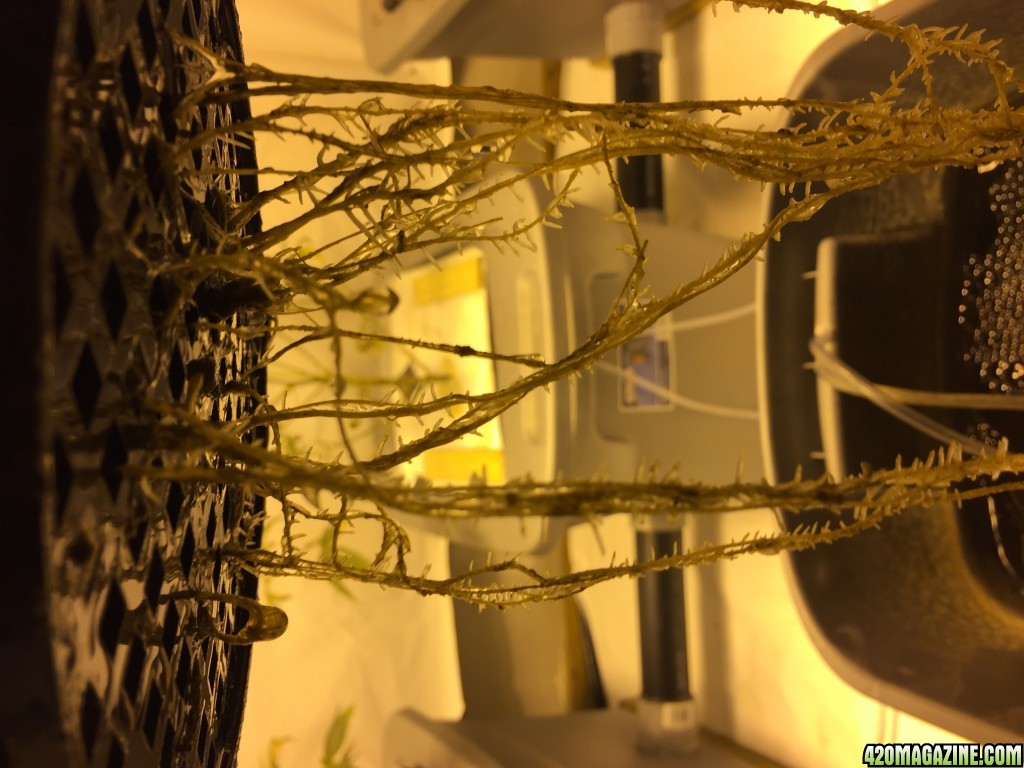 Thank you, hope it helps someone out. Will you be continuing This thread?

First, then Second room. Room 1 was the one oringinal to this post, affected and cured of root issues.

Room 2 on the other hand has had compost tea from the beginning and no issues whatsoever. 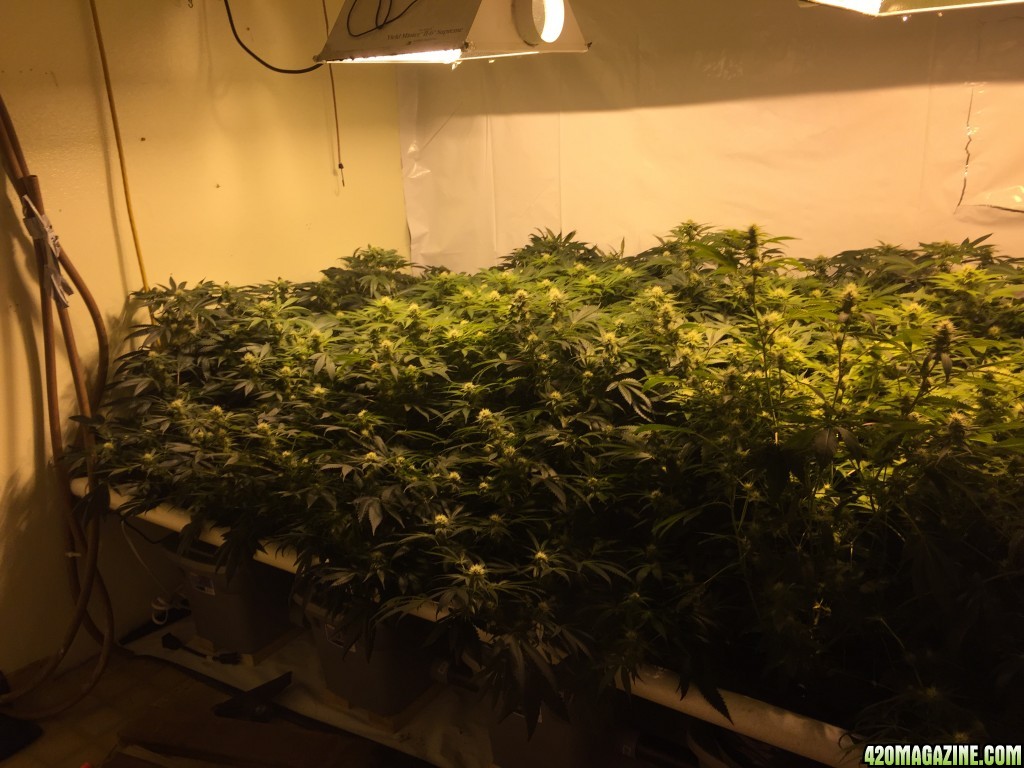 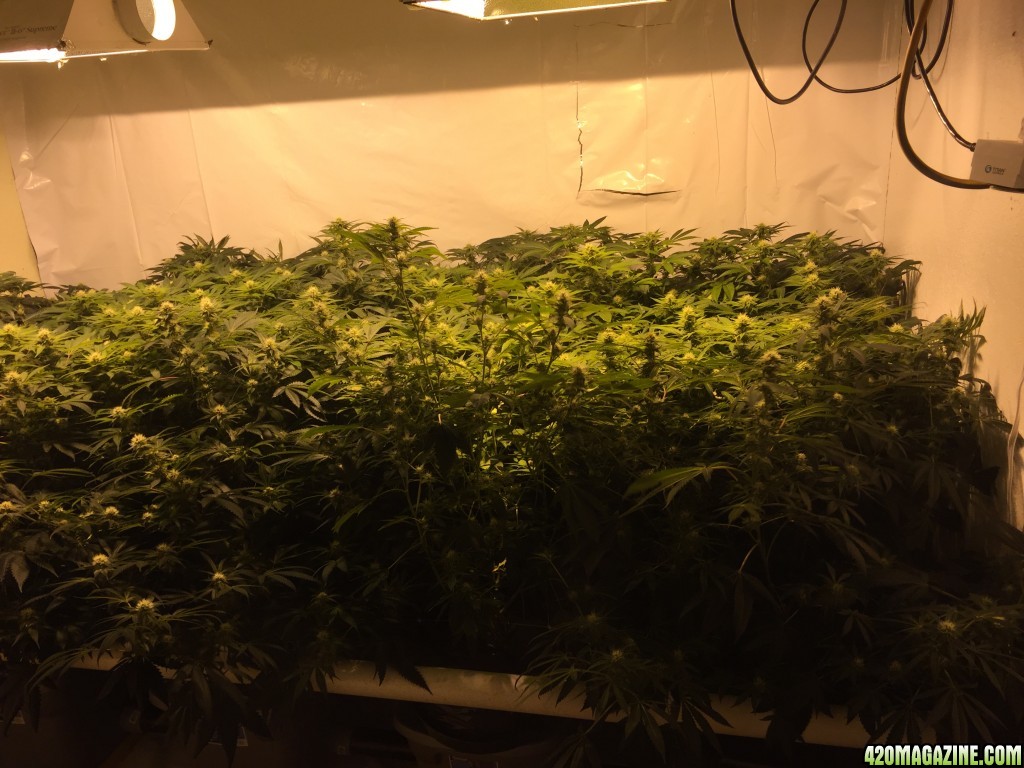 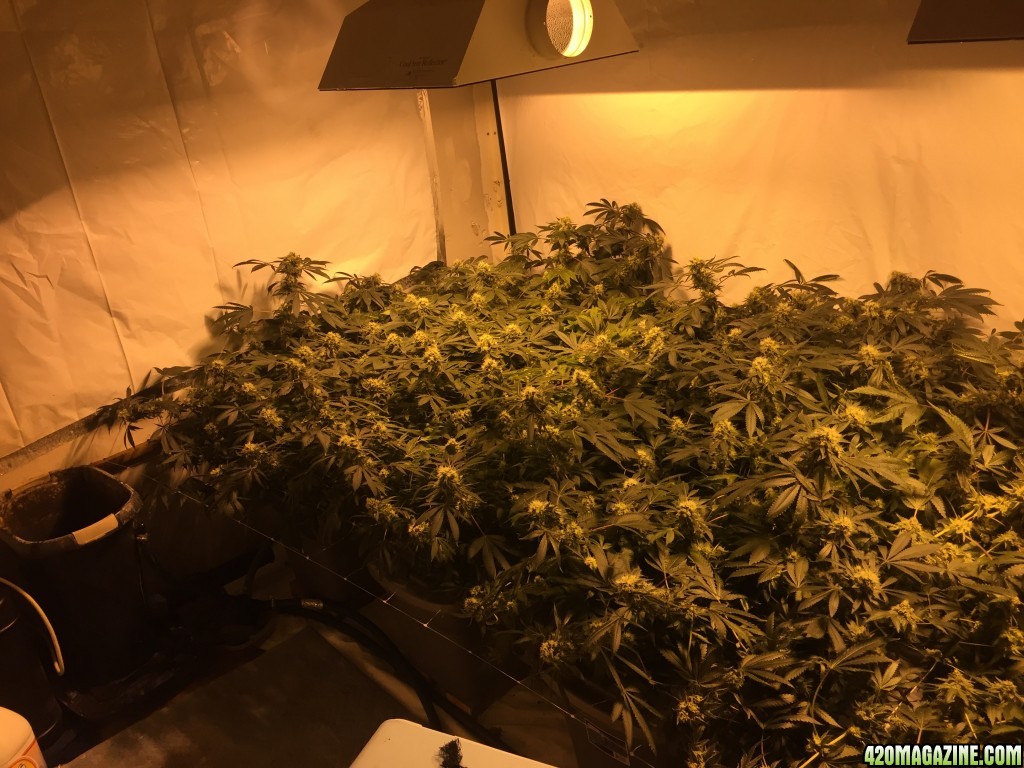 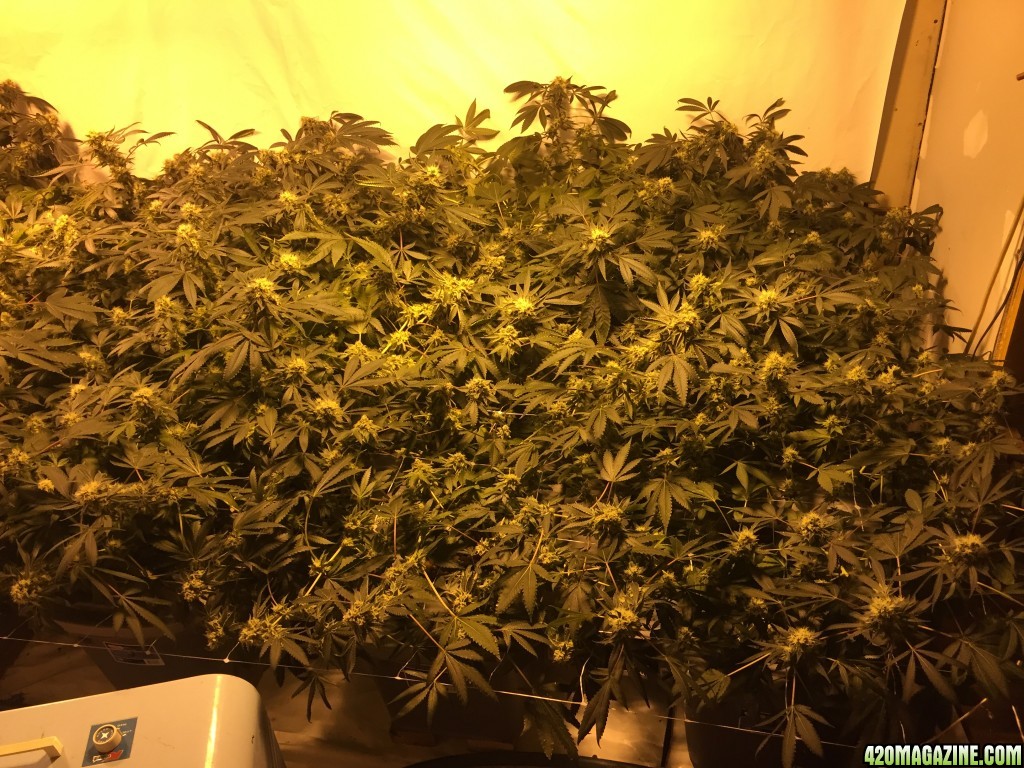 Oh, by the way, room 1 running at 1300 ppms, mind you I have sweets and additives, so theoretically a sterile setup would be running at 800-1000 right now.

also running my chiller temps at 64 degrees, it truly is the sweet spot, with noticable effects on plant health.

in room 2, there is one tote, second to the left on the right side where I accidentally broke half the plant off so I put a 5 gallon soil plant on top of the tote to grow along side the dwc. The difference beteween the plants is immense, the dwc is bigger denser stinker, better in every way possible.

yep, im going through it right now too. I ordered a 1/10 hp chiller from the hydro store and a bottle of hydroguard!!!
I LOVE ROSIN!
NEW! Lemon Cheesecake & Gelato Cookies NEW!

I tried to run a rdwc custom built, insulated Waterfarm/reservoir, in the hot months by changing frozen water bottles twice a day... It did work but what a pia... My next rdwc WF will be with the chiller that experience prompted me to buy...
You were lucky the power went out when it did, another week they would've been ready for the trash....
Waterfarm Pimp Headquarters

You still growing in hydro with beanies? I've went through years of experimenting with it but always cause more problems then it solved,jst wondering if it's still working for you,good info here Hydroponics - Hydroponic and Organic soil growing

G
What's the difference between a sterile rez and a beneficial rez?
2 3

Nov 24, 2016
Event Horizan
E
G
Beneficial microbes -why to use them, how to breed them