"A tenacious and relentless force to be reckoned with."

Medical marijuana supporters in at least 15 cities across the country gathered to honor the memory of San Diego activist and patient Steve McWilliams, who committed suicide after years of struggles with his own pain and federal authorities.

More than 100 people gathered at San Diego City hall to pay tribute to McWilliams, who had been an indefatigable fighter for medical marijuana and who was facing federal prison time from a 2002 raid on his Shelter from the Storm collective. McWilliams had been unable to use his medicine of choice by order of a federal charge. 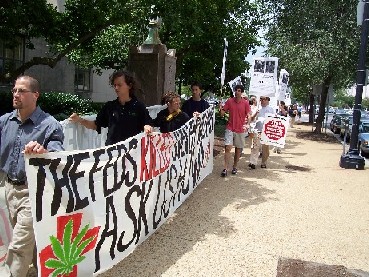 McWilliams killed himself on his 51st birthday. In a suicide note that was distributed at the vigil, he alluded to problems with opioid pain medications he was forced to turn to after his 2002 arrest and protested against federal policies that he said left medical marijuana patients subject to arrest and imprisonment. "The law that was supposed to protect patients like me has been turned on its head so that no patient can feel safe ever again," McWilliams wrote. "I am an advocate and activist for a good cause -- my good health. As an activist I believe in acting when the time is right, to be an impeccable warrior. I believe that my actions -- of not being here -- can help move the discussion of medical marijuana back to what's good for the patient without the DEA telling us what medications we can use." 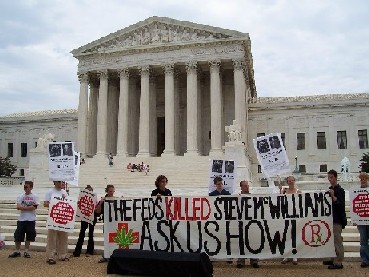 McWilliams lashed out at federal Judge Reuben Brooks, the man who blocked him from using medical marijuana, calling him "a wretched, evil little gnome" who practiced bad medicine from the bench, and the federal drug war machine in which Brooks is a cog. "I cannot allow the government to decide what drugs I must take. It's my life... I believe now though that I will be locked up in some kind of cell. I refuse to allow the government to control my life. That's what so much of this has been about -- my right to use a medicine that worked for me."

In San Diego, mourners signed messages in remembrance books and organizers handed out single-stemmed white roses as speaker after speaker paid tribute to the city's most dynamic medical marijuana activist. His life partner, Barbara McKenzie, urged the crowd to continue the fight despite last month's Supreme Court decision. "This was an injustice not only to him, but to thousands of patients who can't use their medicine," she said.

McKenzie read aloud from McWilliams' suicide note, briefly breaking down as she read his final words. "This was my last chance to help the medical marijuana movement and others that I care about," she read, her voice cracking. "That's what so much of this has been about -- my right to use a medicine that worked for me."

McWilliams had been a fixture at San Diego City Council meetings urging local officials to adopt medical marijuana guidelines, and the politicians remembered him as well. An aide to Mayor Pro Tem Toni Atkins read a statement calling McWilliams "a tenacious and relentless force to be reckoned with" and adding that "public comment at our City Council meetings will never be the same without his smiling face and cannabis leis."

Across the country in Washington, DC, several dozen activists, organized by Americans for Safe Access marked McWilliams' passing with a march through the city's Federal Triangle. Carrying a symbolic coffin, the crowd stopped at landmarks like the Supreme Court, the Justice Department and congressional office buildings, observing 30 seconds of silence at each stop. "It was very somber," said DRCNet assistant director David Guard, who attended the DC vigil. "We were not trying to block streets or get arrested or anything like that; we just wanted to let people know." The coffin marchers carried bore the lettering "Ask me how the feds killed Steve McWilliams." Vigils were reportedly also held in Los Angeles, Oakland, Orange County, San Francisco, Santa Cruz, Sonoma, and Susanville in California, in Denver, Lawrenceburg, Indiana; Eugene and Portland, Oregon; Austin, Texas; and Philadelphia.

"As an activist I've given everything to the cause -- all my possessions, my time and my life," wrote McWilliams in his suicide note. "You can't give more than that." In the end, McWilliams took ultimate control over his life by ending it. In so doing, he died by the words he lived by, the last words he left us with: "No retreat. No surrender." Source

At the time of his passing he was San Diego's foremost medical cannabis advocate. Many credit his work as instrumental in establishing San Diego's medical marijuana guidelines, one of the largest city's in America to have such guidelines.

Steve was long known by San Diegans as a passionate champion for the cause. He was a regular fixture at over 100 City Council meetings, wearing a pot leaf lei and carrying a marijuana plant. He also served on the City's Medical Cannabis Task Force, and ran a campaign for a City Council seat.

However, Steve devoted more of his time outside the establishment. He was a regular fixture at protests and rallies for various causes, often wearing an 'I ♥ Pot' shirt. His Normal Heights residence became the site of Shelter From the Storm's Stir It Up Cannabis Coffee House. A place where cannabis patients could come to use their medicine and share information. Shelter From the Storm also included a modest 25-plant medical cannabis garden. In 2002 Steve received national press when he gave out medical marijuana to patients in front of City Hall. Two days later he was hand delivered a warning letter from US Attorneys to destroy his garden.

Shelter From the Storm was raided soon after by the San Diego County Narcotics Task Force (NTF) who destroyed the garden. Steve was charged with illegal cultivation following this incident. In 2003 he was sentenced to a six months federal prison term. He continued to remain free on appeal, but was subject to drug testing and not allowed to use marijuana. This forced him to take higher doses of the strong narcotic pain medications prescribed by his doctors. These drugs left him with more side effects and less able to function.

On July 11th 2005, in constant pain, and refusing to serve his looming sentence, Steve committed suicide. It was his 51st birthday. He ended his life by overdosing on his prescription medicines. He left a note saying he "refused to allow the government to control my life" and that it was "about my right to use a medicine that worked for me". He signed the letter "No retreat. No surrender."

After Steve’s death in 2005, protests and remembrances were held in 15 cities across the US, including Washington DC. Protesters held “The Feds killed Steve McWilliams. Ask us how!” banners. San Diego City Councilwoman Toni Atkins remembered Steve at City Council calling him "a tenacious and relentless force to be reckoned with", “a hero” for his efforts.

Hope Unlimited sought to honor Steve's memory through the 1st Annual Steve McWilliams Cannabis Warrior Award. Two awards were presented at the meeting. The first to Chip Perry, operator of medical cannabis clinic Medimar, recognizing him for his work in providing medical marijuana identification cards for San Diegans. The second award was presented to the owner of the Old Mill Cafe thanking him for allowing the Hope group to meet there. Medical cannabis patient Rudy Reyes was also chosen as a recipient of the award. He was recognized for the over 20,000 votes he received, running as a medical cannabis patient for County Supervisor. Source

Dec 26, 2013
The General
T
T
CA: A MEDICAL MARIJUANA ACTIVIST IS ARRESTED; MCWILLIAMS OUT OF BAIL AFTER FEDERAL CHARGES