Summit County Looks To Get It Right On Medical Marijuana Regulations

Trailing years behind the implementation of local towns' medical marijuana retail laws, the county government is treading slowly to develop its own regulations.

The Summit Board of County Commissioners say they do plan to implement local policies before the July 1 deadline. They also plan to keep their medical marijuana rules in line with those of Frisco, Breckenridge and Silverthorne.

Despite ongoing discussions among the commissioners and county staff, little else has been decided so far.

"It seemed like we were on the same page . that the county and the towns should be fairly equal in terms of processes so businesses are not dealing with different laws for each community," Commissioner Dan Gibbs said. "We are really just in the discussion phase, so we haven't adopted any policy yet. We're gathering as much information as possible."

The county's policy action will likely be dependent on the recommendations of the countywide planning commission, which will discuss the medical marijuana regulations at its meeting in March.

The county is considering policies that might only allow grow operations or restrict medical marijuana centers - retail locations - to commercially zoned areas, and at least 1,000 feet away from schools.

There are few viable locations for retail locations in unincorporated Summit County ( areas outside of towns ), according to staff reports.

If the county does not implement regulations by July 1, it will default to the state's policies, which would cost the local government almost all control over which, where and how many medical marijuana businesses are opened in unincorporated Summit County, according to a staff report. Under state regulations, local officials would also be unable to regulate centers' signs, size or odor.

At least one person in the local medical marijuana industry say he's glad to see the county taking action and prefer to see effective regulations in place, even if they take some time to develop and implement.

"I got the impression they don't want to do it twice," said Jerry Olson, owner of Frisco's Medical Marijuana of the Rockies. "It's really nice to see them actually commit themselves to developing regulations that fit with the Summit County people."

The commissioners have stalled on regulations since 2009, favoring a sweeping ban on medical marijuana businesses while waiting for changing state laws to stabilize.

County officials are still side-stepping potential policy landmines - including a federal crackdown, a number of proposed state laws and a legalization measure on the ballot in November - that could change Colorado's medical marijuana landscape over the next few months, commissioners said.

The Denver Post contributed to the reporting of this story. 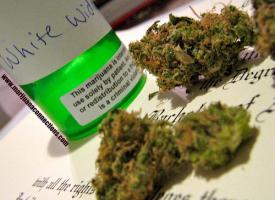