I started another couple of Super Lemon Haze aka SLH. Dropped the seeds originally around the 6th of April, so they are at about 3weeks right now. They started off like other SLH's with really long stems. This continues to be the case, perhaps even more than witnessed in previous SLH grows. 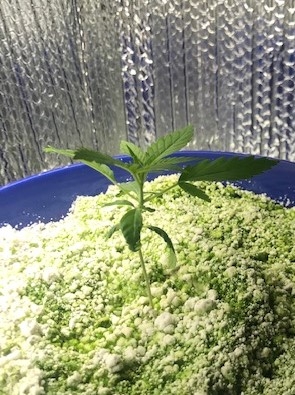 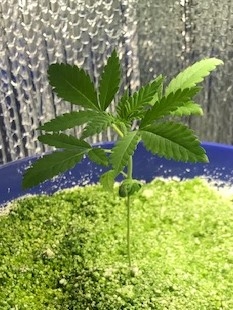 It took them a while to hit the reservoir but now they are getting busy. 3.1 is a little behind 3.2. Figuring it will catch up over the next couple of weeks. 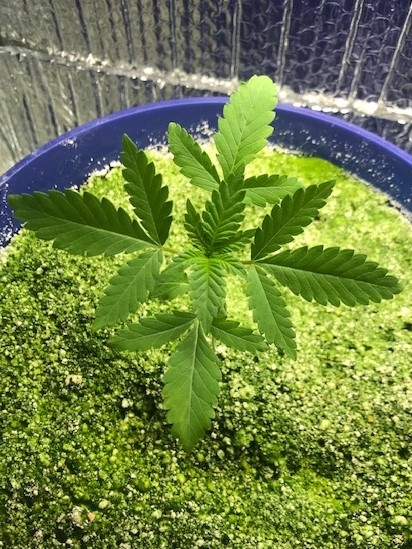 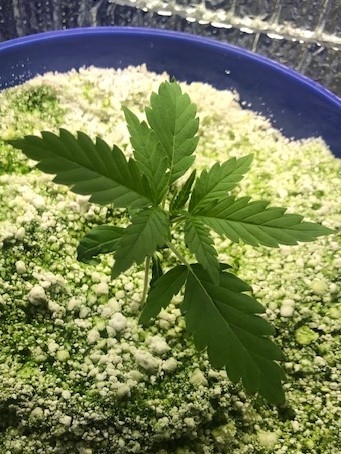 My intent is to veg at least 8 weeks. That means another 5 weeks to go before flip.

Now the nuts and bolts of this grow. Initially dropped in water, soaked for two days and placed in Root Riots when first taps showed. Waited a couple more days and moved into 100% Perlite in 2gal buckets around the 11th when the taps showed out of the Root Riots.. The stems were so long that I buried the Root Riots really deep and and still had about an inch above the surface. As can be seen the long stem action has continued.

Nutrition; I'm going to to run these two on the same comparison I'm currently doing with my Berry Bomb clone grow. I will be growing one with my Dyna-Gro mix and the other with the MegaCrop mix. I figured since I am mixing two different feedings for them, I should do a comparison with these at the same time. The SLH seems to be a very consistent growing strain. They have exhibited similar growth traits through out my previous grows. so I feel they can give me a reasonable comparison.

Lights will be Perfect Sun Mini's when they are moved out of the seedling box. As with all my newly started grows, I start the first 3-4 weeks in the Seedling Box with a T5. During the veg cycle I will be using only one Mini in the smaller veg tent. I'm also using a 17/7 light schedule during Veg cycle. That may sound weird, but my power company is offering me two different discounts if I don't use very much power between 2pm and 9pm daily. So of course I will do everything to cut down on my power during those times. Lights Out!!!

These plants will most likely become really tall monsters. At some point after stretch, I will most likely move them into the Flower tent and bring what in there into the smaller tent. Logistics to be worked out. Worst case I might need to buy another taller tent.

Hey @BTzGrow! Nice looking young ones you've got there, perfectly healthy! Super lemon haze is one of my favorites so i'll be along for the ride!
Happy growing

This has been an awesome performing plant to grow and the smoke is really awesome. Definitely way up on the top most exclusive shelf. My brother @FelipeBlu calls it a Connoisseur smoke. Of course it seems I have been lucky that way with most of my grows since the beginning.

Welcome along, I'm looking forward to seeing the grow through and tasting the results.
Hope you will consider giving some of the following a check out if interested

If you average 450 PPFD during veg, 17 hours will still give you a DLI of about 27.5. On my most recent adventure, I was seeing terrific growth rate during veg (after reservoir was reached) with a DLI of only about 20.

Edited to add that additional light will produce more sugars for the plant to use later in life, even if little additional above-ground growth is seen.
Last edited: May 1, 2019
FelipeBlu’s Outdoor Hempy Photos & Autos 2020 (current)

I moved the SLH sisters from the seedling box. They are at about 4weeks now and I'm looking to veg for a total of 8 weeks. Learned a lesson from the Triple Cheese to not let them get too close to the light and get damaged. So they are upstairs in the Veg Tent with the Triple Cheese. 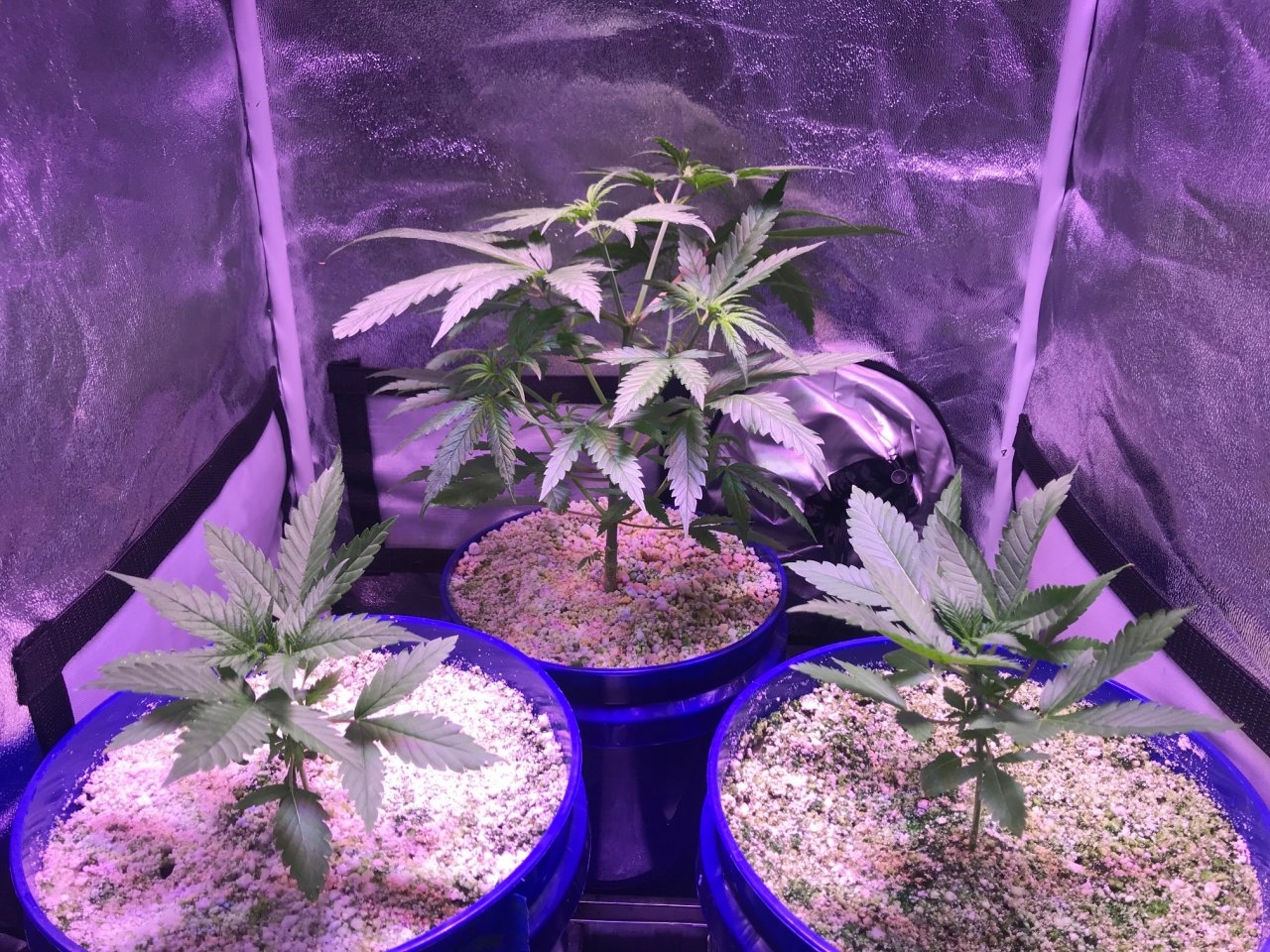 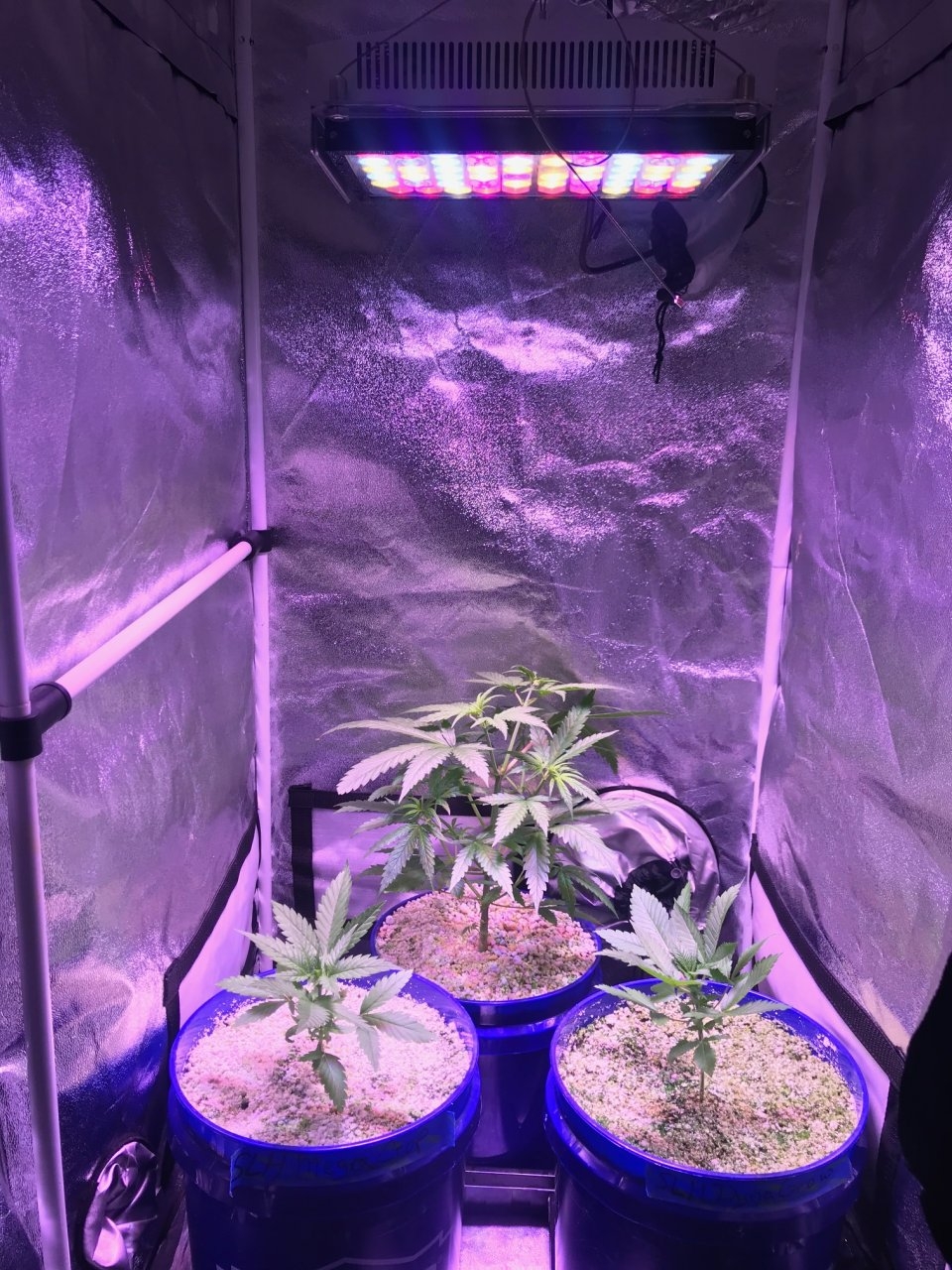 Now will be their time to adjust to the single Perfect Sun Mini.
Hope you will consider giving some of the following a check out if interested

Almost 5 weeks since putting them in perlite and the are doing very nicely. 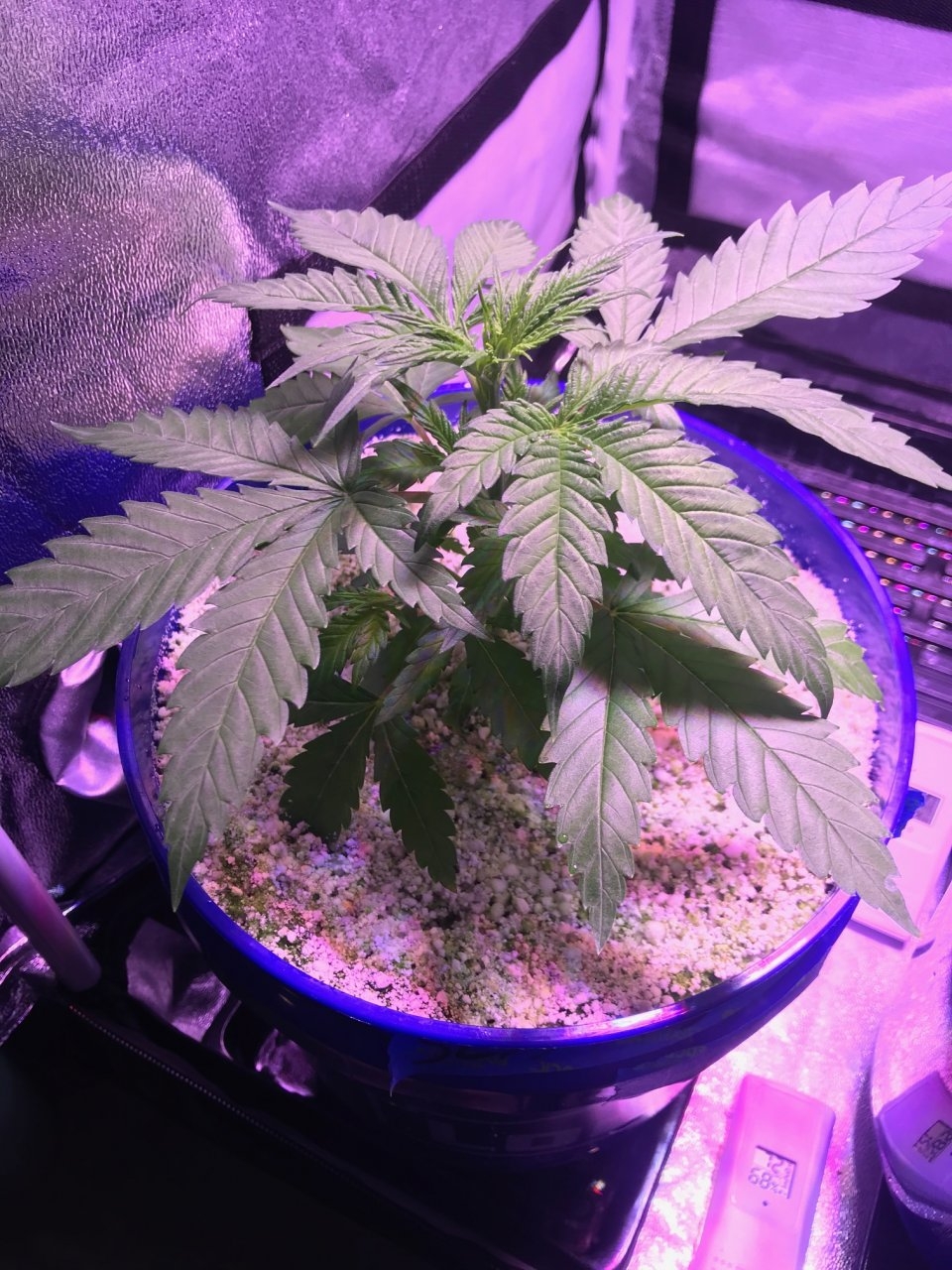 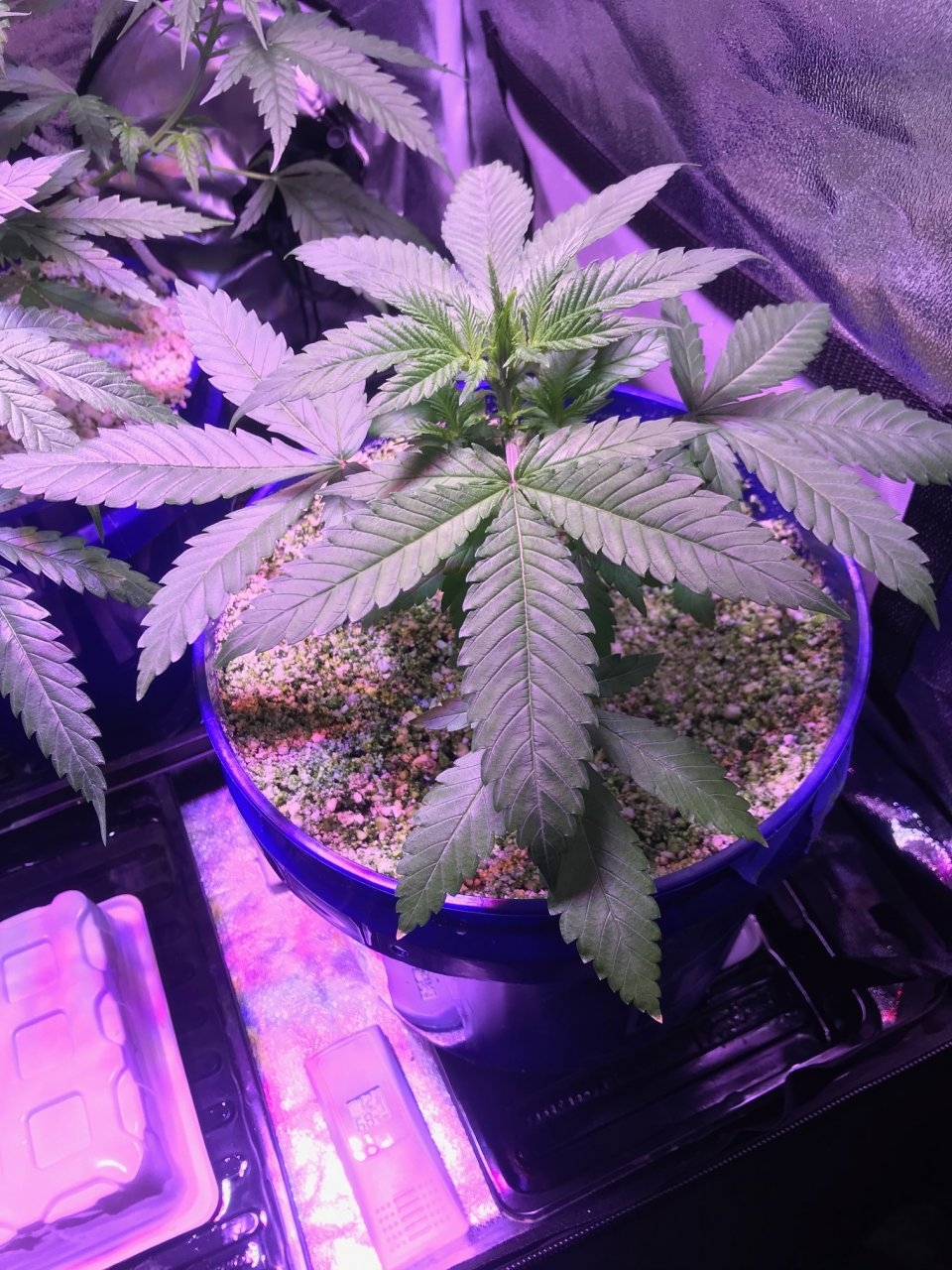 I FIM'd them both this morning with a watering. We shall see what type of success I had with that.
Hope you will consider giving some of the following a check out if interested

I'm at my limit. Not quite ready to jump into a next size up tent.
Hope you will consider giving some of the following a check out if interested

Watering Day before I go away for a week. Fortunately I have someone who is going to come and water while I'm gone.
These girls are closing are just a little over the 5week mark. I'm going to try and get them to 8weeks before the flip. They will be monsters. 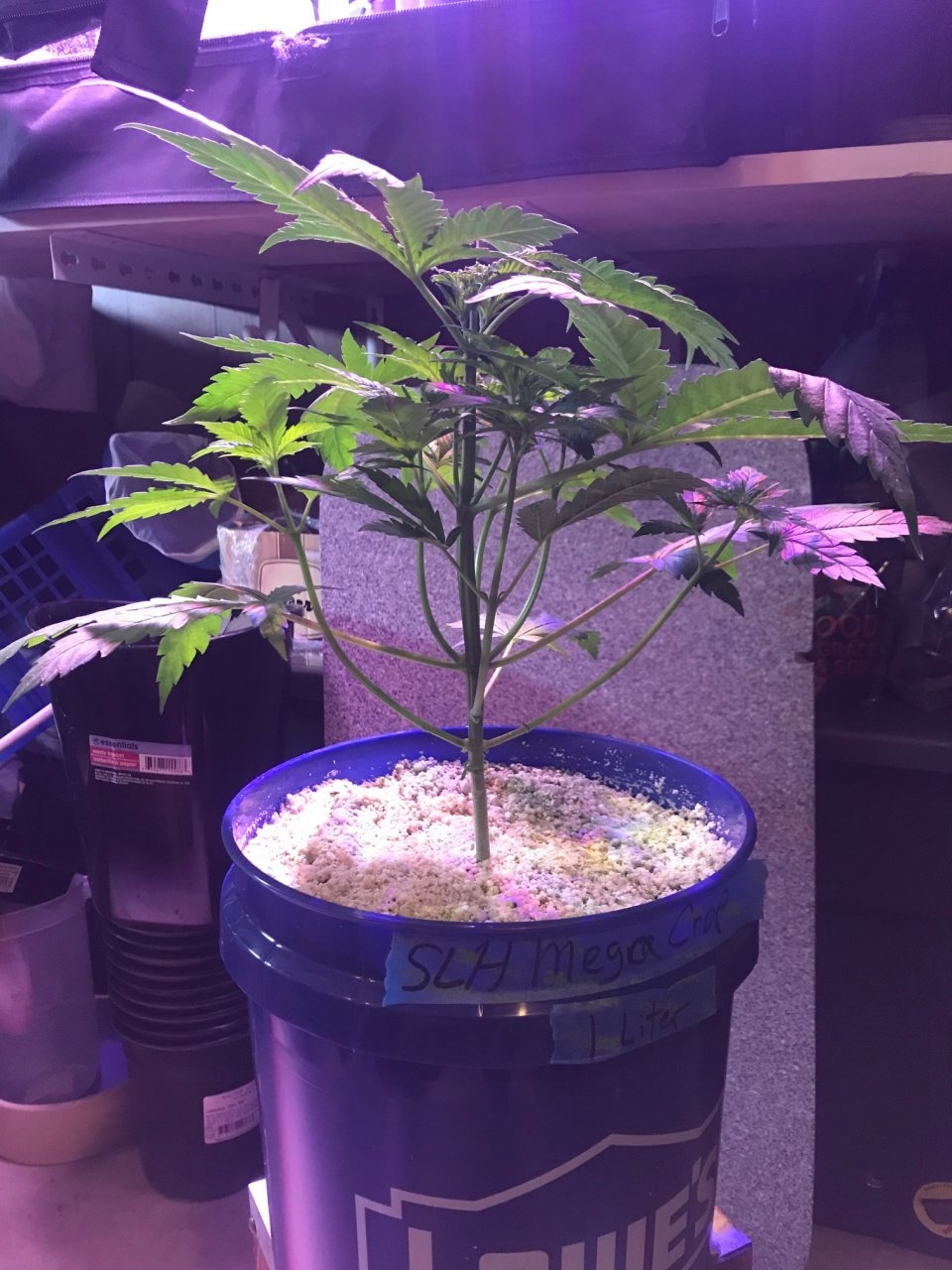 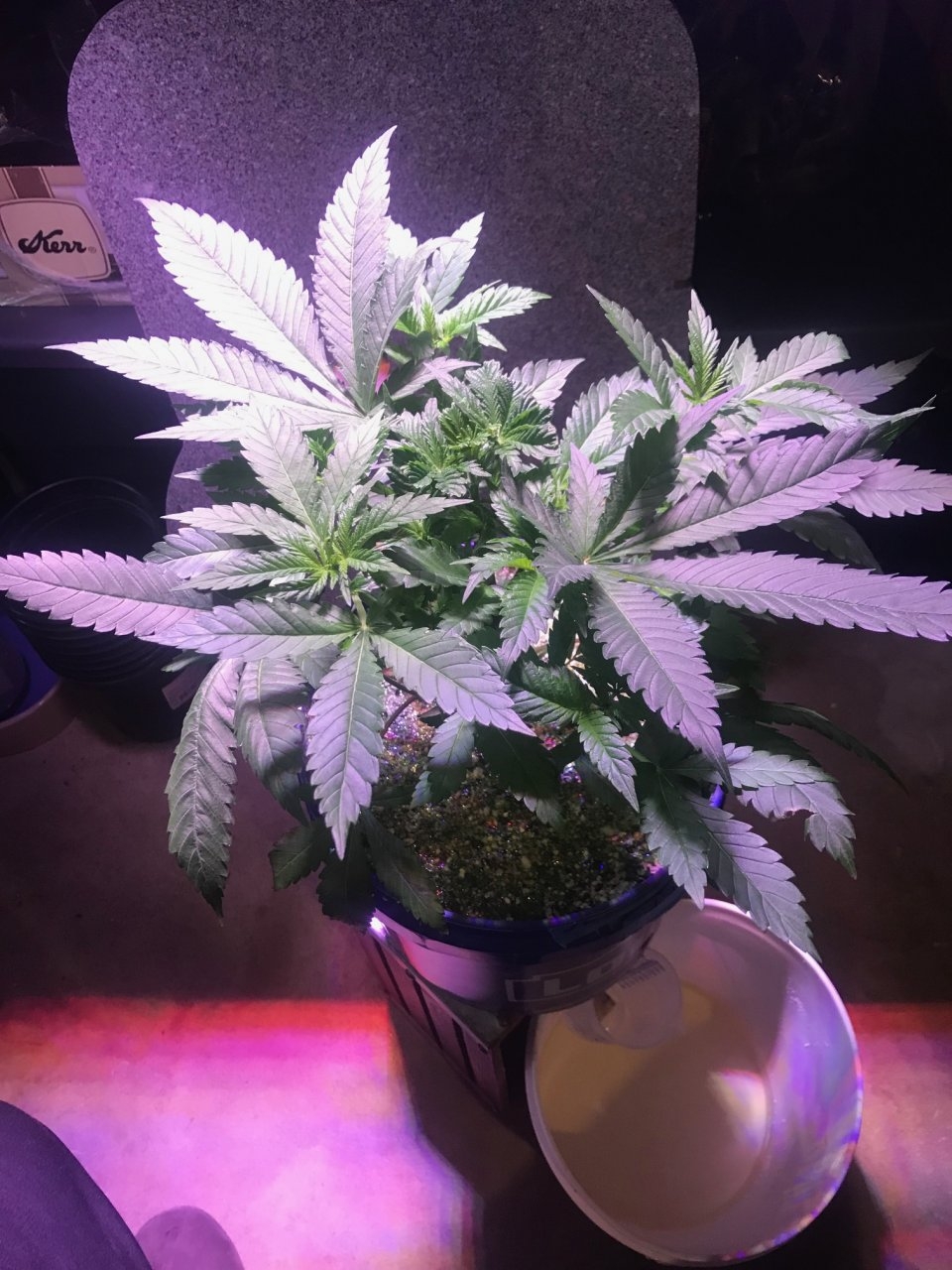 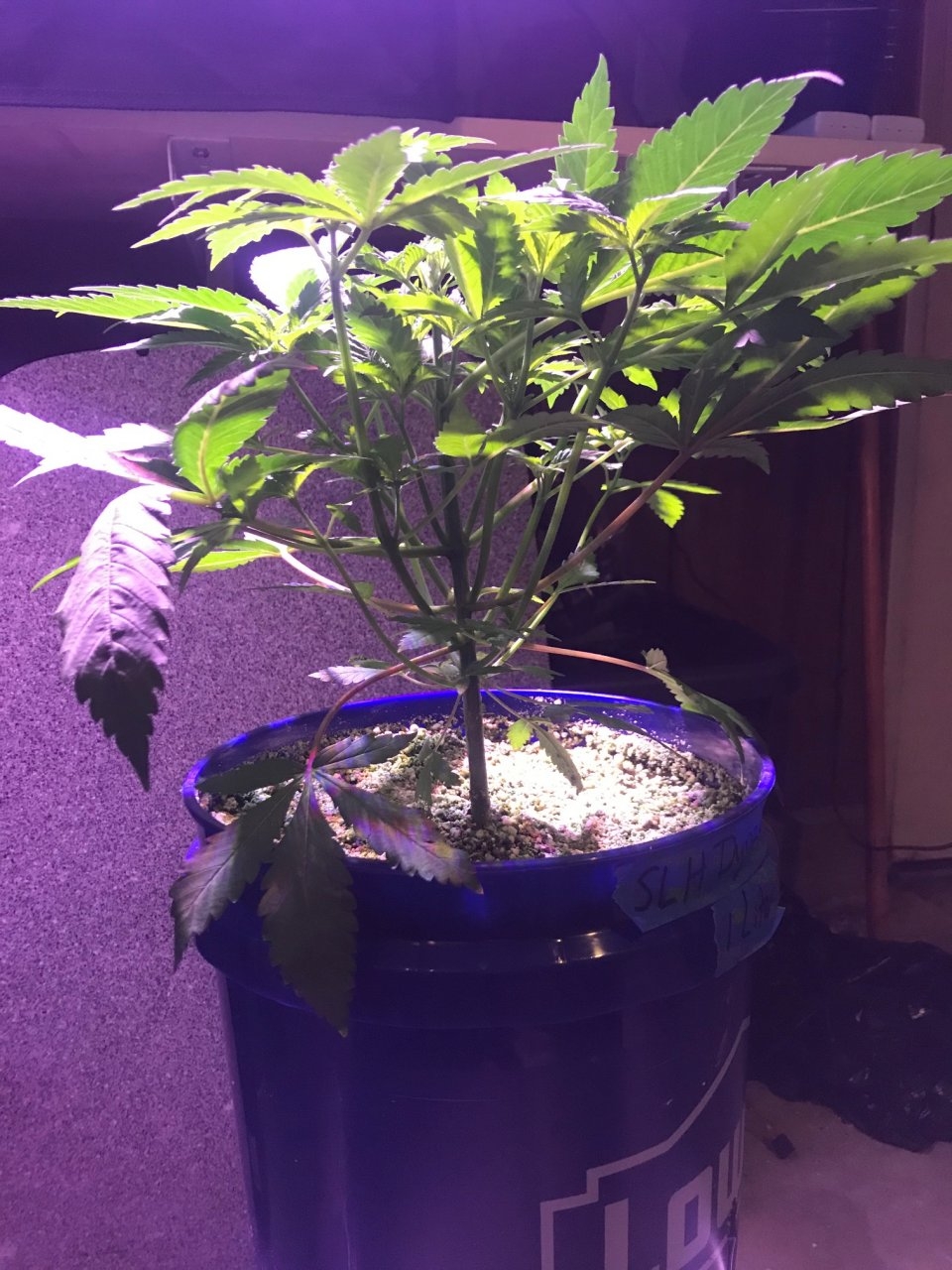 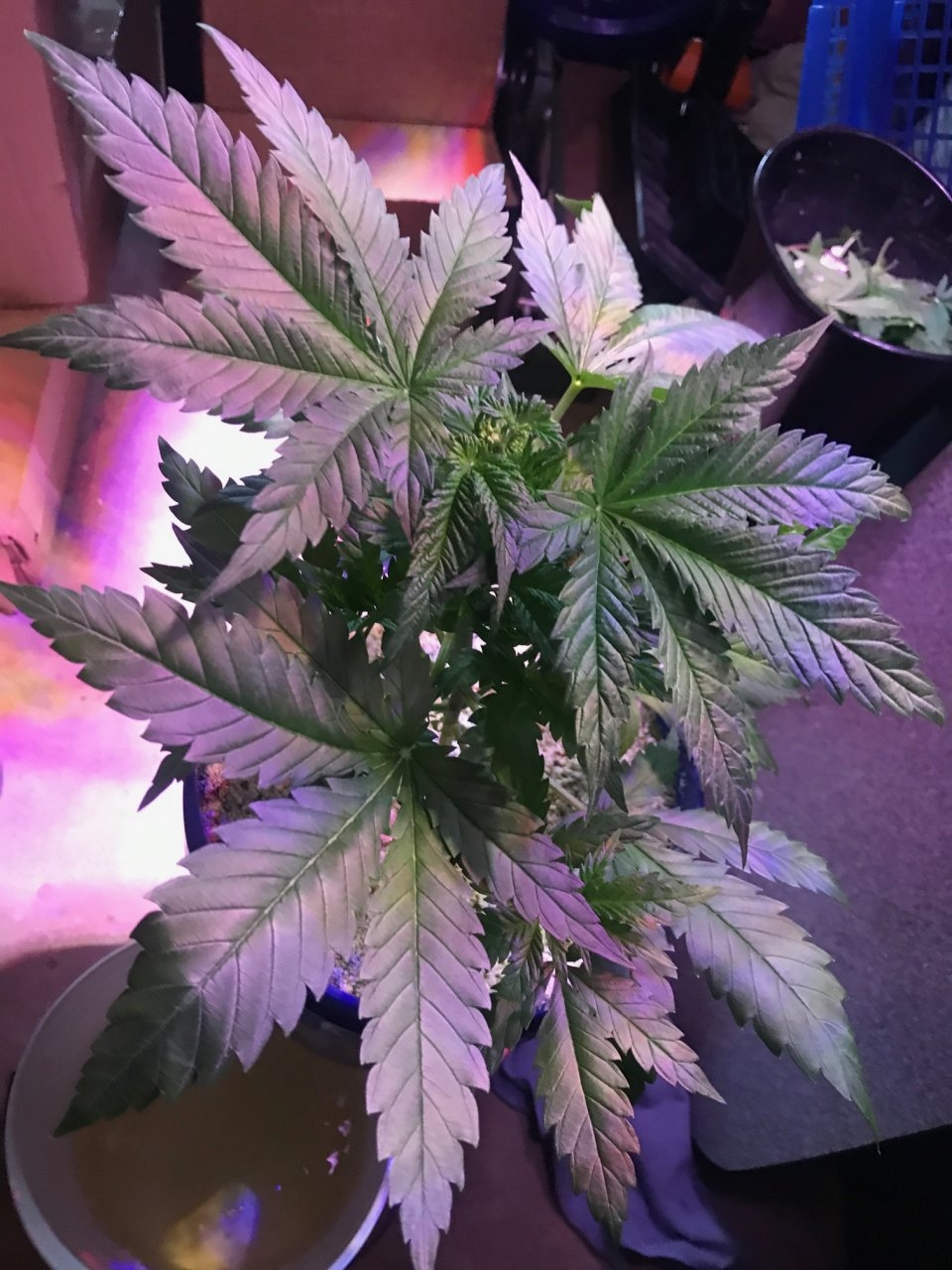 Any closer views of the FIM sites?
Click to expand...

I had a feeling this request would be coming down the pike. 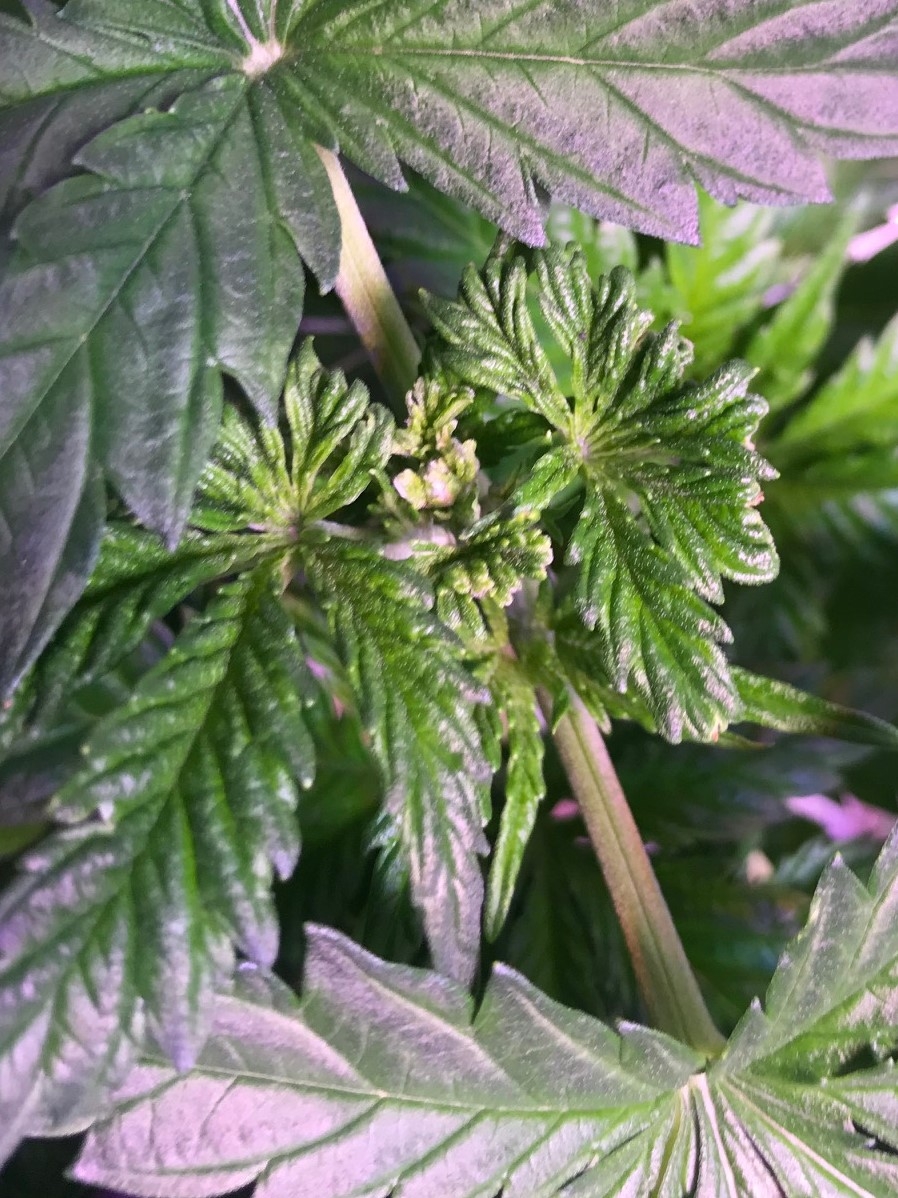 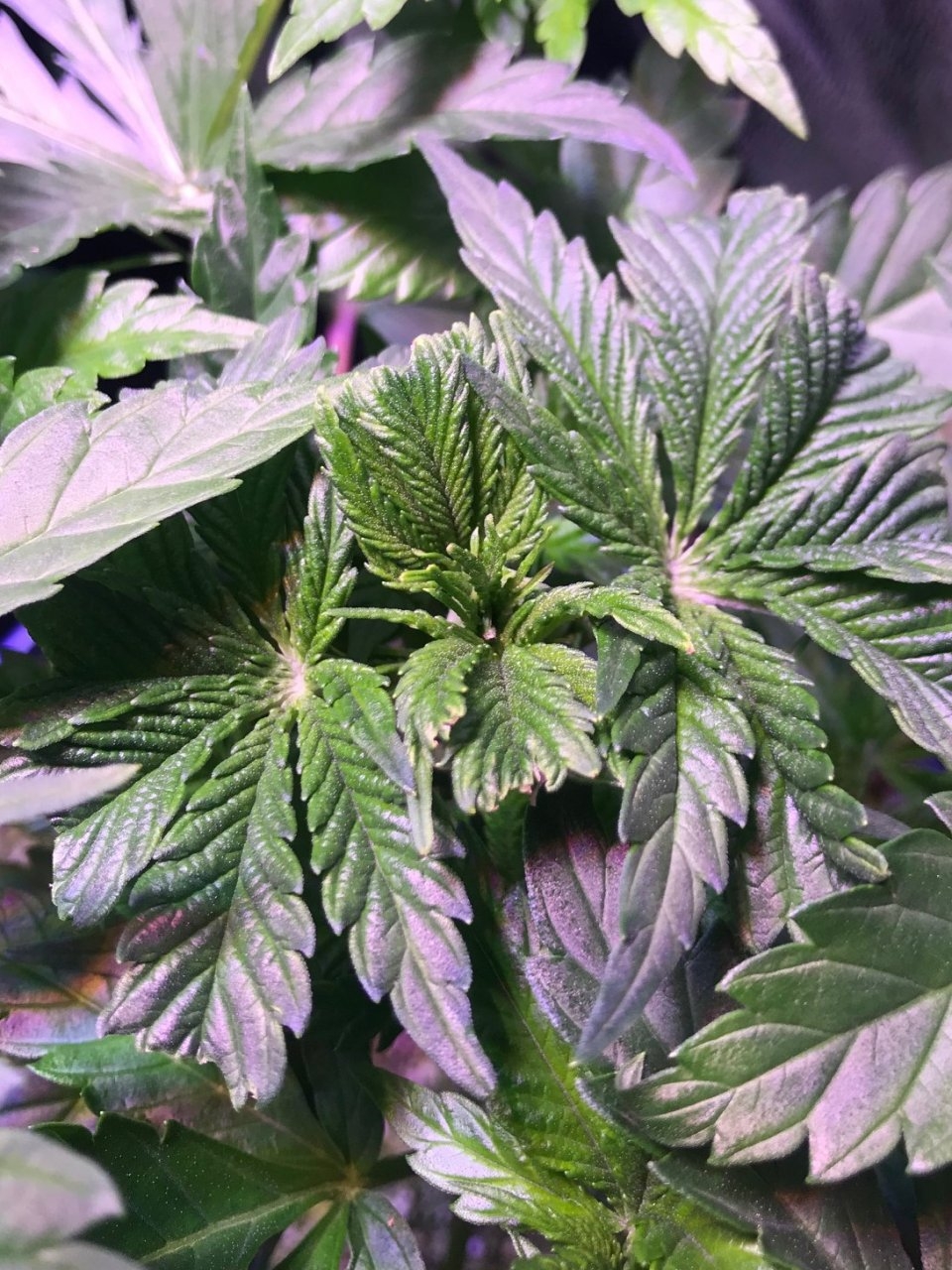 It's still a little early to tell how affective this was. I may still have to cut out the Apical meristem in the middle.
Hope you will consider giving some of the following a check out if interested

The first photo is encouraging. You might have clipped the apical. Not too sure about the second.

We're all here cause we're not all there!

Looking good! I have some SLH coming in soon. What breeder are they from?
Last 2 grows, 2 plant single dwc, cheap cobs in a 2x4x5 making 1/2lb to second grow with clones from first plants, 2 plants, individual 7gal dwc each and 600w lm301b quantums in a 5x5 making a bit over 1.8lbs 2-plant-jack-herer-fem-scrog-dwc-cob-led-lights.458476
J

I'm going to pull me up a chair would love to grow me some of this.
I've been searching for sativa's, hazes of my younger days.
Sadly I've yet to find one come close.
Your led light is a little ass kicker love it.
Silver Mountain

I just love me some Super Lemon Haze!

This one is psychedelic!

I been smokin ultra lemon haze. Great as far as I'm concerned. Hey y’all member that creeper bud? Exactly what this stuff is!

Its from Auto Seeds
We're all here cause we're not all there!