InTheShed said:
Having plants grow rather than die while you're away is a godsend, not a curse

Well there is that of course. Anything is better that starting over after having to throw dead plants out. All in the name of science. It will be interesting to see what the yield is. I may have stumbled on a new process. If I can only figure out what happened during that single week.
Hope you will consider giving some of the following a check out if interested

I have had an issue with these two plants especially since they were flipped. Lower to middle leaves are constantly dropping and they are healthy, fresh and green. It's like there is a constant defoliation the plants are doing on their own.

They were flipped at the same exact time as the Triple Cheese and yet their bud production is severely behind the TC. I have always had a real issue with watering. The pour to drain has always been extremely slow, next to the experience I have had with all my other grows including their tent mate, Triple Cheese.

Then it came to me today what might be the issue with this pair of plants. Then it occurred to me that the perlite I used with these two plants was very different and much smaller in size to the perlite I have used on all of my other grows. When I pour the water nute mix just sits and take time to soak in. Actually, I have recognized almost from the start that the top of the perlite is kinda like a mud pie.

Chatting with @FelipeBlu this afternoon and described the issues and about the time he said hesitantly "I feel I have heard of this before" it came to me and him that the perlite is so small and has formed a bit of a paste cement.

So discussed options, and decided to use @SweetSue soak and swish technique to loosen and get rid of most of the small pasty perlite and re-pot with my normal sized perlite. What's the worse that could happen, I don't feel the plants could perform any worse than currently. The alternative would be to cut down and throw out. Too much time and materials invested to do that.

So the "Dirty Deeds Done Dirt Cheap" and the plants have been re potted into fresh pots with larger perlite. Here's a picture of the root ball of the plant that was getting fed by the DynaGro Mix. It's at the point of being put into the new fresh perlite Hempy Bucket. 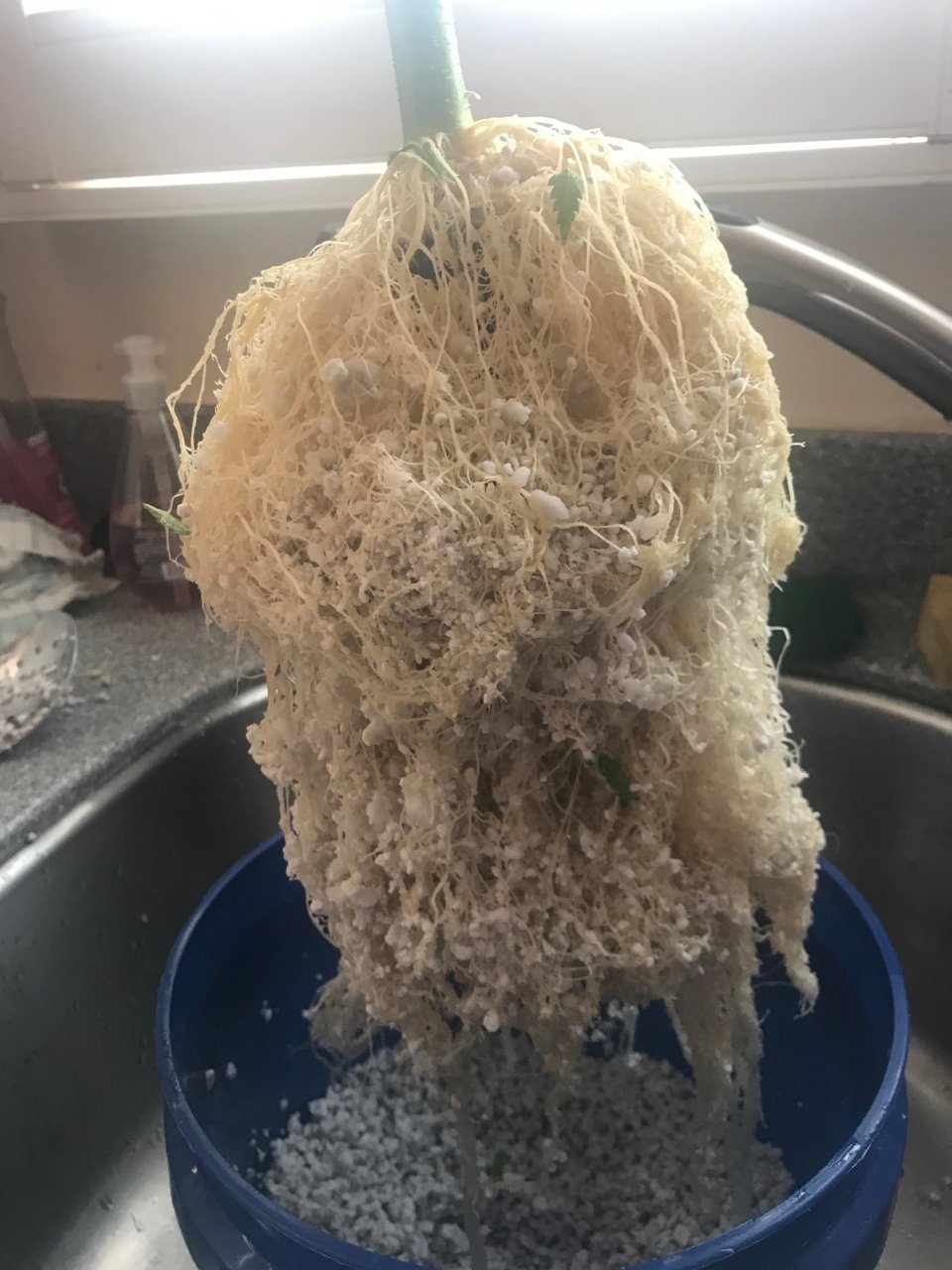 Root Ball from my Hempy SLH grow.
It was about twice the size of the MegaCrop fed roots. Another interesting aspect of this process. I don't have great expectations for an awesome yield from these two plants. I think at this point the comparison grow between the two different nutrient mixed might be moot. I was so hoping the MegaCrop was going to out perform. Unfortunately not.

A final note to the process. The flushing afterward was difficult. It required several gallons to bring the runoff pH down under 6. I would pour, drain, measure pH and then tilt and try and empty the reservoirs as as possible. Rinse and Repeat. I also went with a slightly lower nutrient mix for a slightly lower PPM. I am anticipating a few days at the least for these girls to hopefully recover. This is not what I wanted to do at the end of stretch and during the flowering period.
Hope you will consider giving some of the following a check out if interested

This is not what I wanted to do at the end of stretch and during the flowering period.
Click to expand...

Take heart. They’re robust plants and hempy is the most forgiving system I’ve grown with. A day or two and they’ll bounce back. Good call on the perlite @FelipeBlu.

And good work on correcting it so quickly BT.

Had a face palm moment there, didn’t you?

The best news is it’s behind you.
SweetSue’s Threads - Organized for easy reference

Opioid Tapering With Cannabis - A Regimen

The Basic Links For Patients and Caregivers

Watering day along with some light maintenance today. Best news is it appears that the horrible treatment and shock I put these two plants through a couple of days ago hasn't seemed to bother them much at all.

Interestingly it appears they have responded almost immediately with more grow sites popping open all over. Excellent news indeed. The leaf dropping seems to have disappeared almost over night. Face Palm! 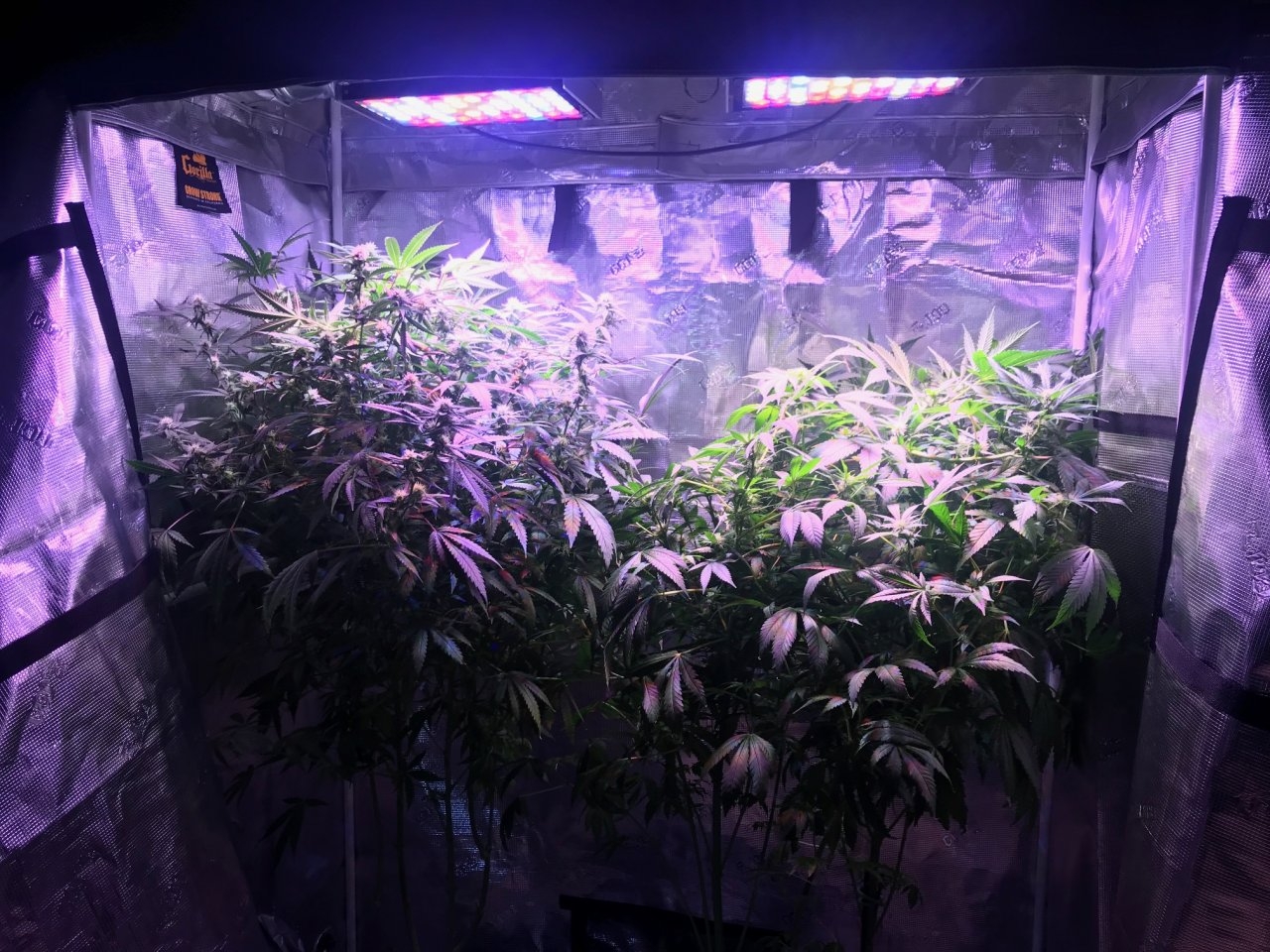 Here the two SLH are on the right side of the tent with a Perfect Sun Mini above replacing the 100watt Quantum board.
Hope you will consider giving some of the following a check out if interested

TUTORIALS/DISCUSSIONS:
Do we need to pH adjust our nutrient solutions?
Low Stress Training (LST) - a tutorial
The Hows and Whys of Supercropping
Build your own Cloninator aeroponic cloning bucket
Rice Balls
Great macro pics for under $10

GO VOTE in the 420mag contests. It's FREE! Click here.


420magazine.com Journals: "We grow our users as well as our plants"​

I just finished creating a journal for my new Triple Cheese Clone Grow w Ebb&Flow. I hope if you are interested, you will visit and check it out.
Hope you will consider giving some of the following a check out if interested

Watering day and these girls continue to take about 2liters ever other day with some nice runoff.
Hope you will consider giving some of the following a check out if interested

Glad to see that this treatment worked!

Cannabis is an amazing plant!

About how tall Is one of your plants? I got a large mother plant that Is about 4 feet all. It has lots of pistils.

How are they doing now Bro?

It's been about a month since I reported in on these two plants. I made a change in the perlite and it hasn't seemed to negatively impacted the grow. I did find some bud rot on one of the colas of the MegaCrop grown plant. Interesting that is where it started over on the BeBo's also. Removed and watching. I do have humidity issues that can't be fixed. San Diego humidity has been a bit on the higher side for the last few weeks.

These plants should be getting close to harvest but I'm not seeing any amber so it will just be a continue to wait and see process.
Hope you will consider giving some of the following a check out if interested

It’s so awesome that you can pull a blooming plant out and completely expose its roots, and it acts like nothing happened.

I wonder what in the MegaCrop might promote bud rot?

FelipeBlu said:
It’s so awesome that you can pull a blooming plant out and completely expose its roots, and it acts like nothing happened.

I know! What an amazing experience. Not something I'd want to try very often, but still Hempy is awesome.


FelipeBlu said:
I wonder what in the MegaCrop might promote bud rot?

I'm not sure. It has been off the MegaCrop diet for several weeks now. We hare having issues with humidity down here right now. Heat with humidity, Yuk!
Hope you will consider giving some of the following a check out if interested

Yeah, that’s a more likely cause. The fact that it has happened to two MegaCrop plants is probably just a coincidence.
But conspiracy theories have been built on less!

I cut and hung the SLH Mega Crop plant on Monday Sept 2nd. Drying indoors in a dark closet that was recently opened up the temp was in the mid 70's and the humidity was in the 62% range. Just about perfect. Tested and cut the buds off today 9 days later and have my yield for this plant.

Tight top colas came in at 12grams. The smaller and mid branch buds came in at 29grams. A total of 41grams of SLH is close to previous yields but still low. The other SLH that was grow with DynaGro mix will yield less. I'm not grading the comparison with the two plants very critically because I re-potted them during flower into a better perlite. From that point I grew both in the DynaGro mix.

So 41grams equals 1.44oz. It should keep me in SLH for a while indeed. Add another possible ounce if I'm lucky from the other plant and I will be doing okay for a while. Now the burp and cure stage for the next 4weeks.
Hope you will consider giving some of the following a check out if interested