I want to put my Blue Dream from seed on Liquid Karma & Superthrive to help promote root mass.
Is this a good idea? If it is, can I put her on both at the same time?(not in the same gallon of water though) or which one first and at what amounts...

When should I give her these, and what amounts to start with? 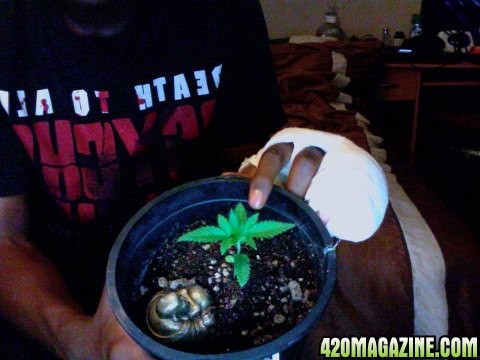 Don't give them anything but water till they get about a foot tall. Then you can start hitting them with nutes.

Why wait so long Bro?

Too easy to burn them during there early growth. There is plenty of nutes in the soil to get them through the first stage. Then after they get about a foot tall you can start adding some nutes carefully. The 2 biggest problems with people first starting out is uneven watering and excessive nutes. You can use a little root growth stimulators as long as you follow the directions on the package. When you start the nutes I like to start at half the recommended dosage to see how they react first.

Thanks, Your typing was not wasted Weed420. I am taking this into future reference.
-WE$TsideGreenery

I disagree on the 1 foot for rooting supplements. For nutes considering you are using FFOF that is fine because the FFOF already has some slow release NPK.

But for things like superthrive(have used it), liquid karma (havent used it, but i just read what it is right now), or B-1 (have used it). Using them after being 1-2 weeks old in MODERATION is fine and I recommend it.

My soil would be similar to FFOF that I just transplanted 8 clones into. It is compost, manure, greensand, lots of different blood meals feather meals, bone meals, cocoa meals, perlite, jamaican bat guano, sulphur, lime, worm castings, azomite, and probably a few other minor things I am forgeting at the moment. But my point is its very rich in nutes, much liek i hear the FFOF is.

When I first transplant my clone (which is equivalent to a 5-9 day old seedling) I hit it with water THAT HAS a tiny tiny bit of both b-1 and superthrive. Four or so days later will be the next time I water and at that time I hit it again with b-1 and superthrive in a slightly higher dose. 4-5 days later I will water again and this time it will have a good dose of b-1, superthrive, a tiny bit of 5-1-1 alaskan fish fert and a tiny bit of blackstrap molasses. Five days later i water again and add silica to the mix slightly increasing the fish fert and molasses, by this time the b-1 is like a half a shotglass full per gallon and the superthrive is like 5-7 drops per gallon.

Blue Dream from seed, Any help & tips for the First time grower? Take a look here.
2

Blue Dream from seed - Feedback is the best