The powerful narcotics killed the pain, but Ben Marksmeier feared they might kill him, too.

The Army National Guard sergeant lost most of his right leg in 2007 to a roadside bomb in Iraq. While undergoing surgeries and physical therapy to rehabilitate his left leg, Marksmeier said, he twice got off prescription painkillers, only to end up hooked a third time.

At the urging of a friend in 2008, he tried self-medicating with marijuana.

"I'm not trying to make it out like it was magic," Marksmeier said of a drug that remains illegal in Nebraska. "But after about 10 or 15 minutes, it was just relief."

Eight years later, Marksmeier said, he still uses cannabis as needed but hasn't relied on narcotics since. The 30-year-old veteran is convinced that if lawmakers legalized medical marijuana, the state would see fewer people addicted to opioids.

It's an increasingly common argument, especially as public health experts report a national epidemic of prescription painkiller and heroin abuse.

It also comes as the Nebraska Legislature approaches a critical vote on Legislative Bill 643, which would legalize the use of cannabis as a medicine.

Yet opinions remain split in Nebraska's medical community about whether cannabis represents a safer pain-management alternative to drugs such as OxyContin, Percocet and Vicodin.

The proposed legislation made it through the first round of debate last year on a vote of 27-12. Then lawmakers tabled it as the session ended, and it was carried over to this year.

Sen. Tommy Garrett of Bellevue, sponsor of the measure, said he's confident the bill has more than the 25 votes needed to advance to the final round. Whether he can get the 33 votes needed to overcome an expected filibuster remains to be seen.

Touted by supporters as a tightly regulated approach to medical marijuana, the Nebraska bill would not allow patients to grow plants or smoke cannabis, as some other states have permitted. Instead, patients would have to take the drug in pills, in oils or through a vaporizer.

The current version of the bill would require those seeking medical cannabis to be certified by a doctor as suffering from one of nine conditions, including cancer with certain symptoms, terminal illnesses, ALS, Parkinson's disease, severe epilepsy, glaucoma and HIV.

A couple of amendments, which might be debated, propose expanding the list to 16 conditions, including opioid addiction.

The author of one amendment is Sen. Sara Howard of Omaha.

"This is about treatment," Howard said, adding that her amendment also would increase the role of physicians in a cannabis program. "Treating it like any other health issue is very important to me."

It's also a personal issue for Howard. She said her older sister became addicted to prescription painkillers following an auto accident and died from an overdose in 2009.

Opioid pain relievers accounted for nearly 40 percent of the 124 drug overdose deaths in Nebraska in 2014. Three out of four overdoses were unintentional, according to the State Department of Health and Human Services.

Those who support the Nebraska bill point to a 2014 study by researchers at Johns Hopkins University and the Philadelphia Veterans Affairs Medical Center that tracked opioid overdoses in 13 medical-marijuana states.

Based on 12 years of public health data, the 13 states saw an average of 25 percent fewer deaths tied to prescription painkillers. Ten additional states have legalized medical marijuana since the launch of the study, so they were not included.

The study was not a controlled experiment, so several factors could explain the results, lead author Marcus Bachhuber said in an article published by Johns Hopkins. But one explanation could be that more people with chronic pain chose medical marijuana over pain pills.

Dr. Les Spry, a Lincoln kidney specialist, said such studies have a limited value. At most, he said, they show just an association between two things.

"Show me a scientific cause and effect," he said.

A past president of the Nebraska Medical Association, Spry said he opposes legalizing medical marijuana, at least for now. But he added his voice to the growing chorus of health care providers who want to see more research of marijuana's medicinal properties.

The biggest barrier to scientific study is the federal government's listing of marijuana as a Schedule I drug, defined as substances with no medical use and a high potential for abuse. Also in the category are LSD, heroin, ecstasy, quaaludes and peyote.

If Congress moved the drug to Schedule II – which includes methamphetamine and cocaine – marijuana would be much easier to study, Spry said. But attempts to reschedule the drug have failed for a variety of reasons.

Spry said he knows there are clinical studies and plenty of anecdotal reports of the medicinal effect of marijuana. In his own practice, he has treated patients with severe nausea who have traveled to California and Colorado to use cannabis. Some have reported they obtained relief from the plant when conventional medicines failed.

But how is a doctor supposed to decide what dose to provide a patient? Spry asked. Or whether marijuana is safe to use in combination with other drugs?

"When you legalize this on paltry scientific information, you're telling me to make nonscientific decisions for my patients. And that's not what I do," Spry said.

Supporters of the medical cannabis bill counter that many medicines approved by the U.S. Food and Drug Administration end up killing patients. Every day, 44 people in the U.S. die from a prescription painkiller overdose, according to the Centers for Disease Control and Prevention. In 2013, the death toll exceeded 16,000.

"I want someone to show me what the numbers of people dying from marijuana abuse are," said Dr. Ed Truemper, an Omaha pediatrician.

In the meantime, patients who've become addicted to prescription opioids are increasingly turning to heroin as a cheaper, easier-to-get alternative, Truemper said.

California legalized marijuana as a medicine 20 years ago, and there have been a host of clinical studies – and even more anecdotal reports from patients – that suggest the drug relieves symptoms. The FDA has approved a couple of pharmaceutical drugs derived from the active ingredients of cannabis.

But bringing new drugs to market can cost more than a billion dollars and require a decade or more of study to obtain FDA approval, based on a 2014 report in Scientific American.

Truemper said he agrees that more investigation is needed but says a lack of research seems to be a popular excuse for those who oppose medical cannabis.

"What is your answer for people who are suffering today, tomorrow and next year? Because 'wait' is not an answer," he said. 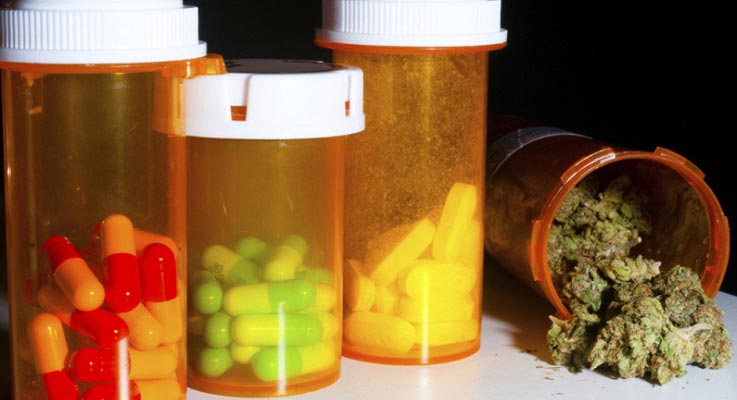 As millions of people know, prescription opiods are a leading cause of kidney damage (via companion ingredients such as acetominophen) as well as damaging liver, lungs, etc. This means opiod use keeps kidney specialists, like Dr. Les Spry, in business.

Only the worst kind of self-serving vulture would chose to speak out against a cure that would put him out of business.
Radogast