PROVIDENCE – Two committees of the state House of Representatives took up a host of proposals on Wednesday seeking to regulate marijuana, bringing out medical-marijuana patients, university students and former and current law-enforcement officers.

Supporters of a bill to legalize and tax the drug, including a handful of former and retired police officers, argued that the proposed law would make the state safer by allowing the police to focus on major crimes rather than marijuana offenses, while also helping the state dig out of its financial troubles by providing additional tax revenue.

State Attorney General Peter F. Kilmartin's office and the Rhode Island Police Chiefs' Association spoke in opposition to a bill to decriminalize possession of small amounts of marijuana, arguing that the proposed law would send a "mixed message" to youths about the risks associated with marijuana.

And local medical-marijuana users came out against still another proposal that would tax the so-called "compassion centers" that will be licensed and regulated by the state to grow and sell marijuana.

Ellen Smith, a North Scituate resident who has been using medical marijuana for about four years, said the tax would unfairly single out marijuana patients, as other prescription medication users are not currently taxed. "I don't understand how that is fair," Smith said.

Consideration of the bills comes close on the heels of two significant developments in a state-sanctioned medical-marijuana industry.

Last week, Governor Chafee proposed a new surcharge and tax on medical-marijuana sales as part of his first state budget. On Tuesday, the state Department of Health announced the first three recipients of state licenses to open compassion centers.

Rep. Edith H. Ajello, D-Providence, said she again introduced a bill to legalize, regulate and tax marijuana because she believed it would "do wonders" by improving the state's budget situation while "taking the criminal element" out of the marijuana supply-and-demand chain. "We are moving towards [marijuana's] broad acceptance," Ajello said in a hearing before the House Finance Committee.

Rep. Rene Menard, D-Lincoln, said he introduced legislation to tax compassion centers because he viewed them as a potentially lucrative industry that should help generate revenue for the state. (Menard says his bill differs from Governor Chafee's proposal because it would only tax centers that generate more than $500,000 in revenue, whereas Chafee's plan would tax all centers.)

Rep. John G. Edwards, D-Tiverton, said he again introduced a bill that would make possession of up to one ounce of marijuana a civil offense subject to a $150 fine to remove the "stigma associated with criminal arrest" that prevents many Rhode Islanders from attaining good-paying jobs, or even volunteering in some places.

He noted that at least a dozen other states have similar laws on their books, including Massachusetts. "Two years ago, they did this and the state has not imploded," Edwards said at a House Judiciary Committee hearing.

But Rep. Jon Brien, a Woonsocket Democrat who is a member of the House Judiciary Committee, voiced concern that the proposed legislation would only make the state's marijuana policy more convoluted.

"The perception that marijuana is a harmless drug is absurd to say the least," said Central Falls Police Chief Joseph P. Moran III, speaking on behalf of the Police Chiefs' Association.

Four other marijuana-related bills, all submitted by Rep. Roberto DaSilva, D-East Providence, were also under consideration Wednesday night in the House Judiciary Committee. No action was expected to be taken on those or any of the other bills. 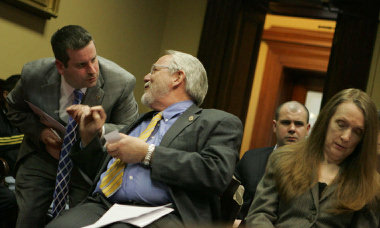