Hi, new grower here, just experimenting in the basement in a low budget way and hoping for some support. I've been learning as I go, mainly by reading lots of great info from threads on here. I have been meaning to start a journal ever since my seeds first popped but haven't gotten to it until now. So, it won't be a real "start to finish" journal since my girls are already several weeks into flowering, but I do have some pics from earlier on if anyone is interested. I did quite a bit of LST, which was a bit random and improvised, but I think it was pretty effective since I seem to have a pretty good number of colas now that are in the same height range along the top. I'm hoping that by posting this I can get some good feedback from experienced growers about what I can do from this point forward to maximize the yield (short of upgrading lights- I know my light are on the weak end overall, but am not prepared to do much more than perhaps adding a couple more CFL bulbs at the moment), and in a few weeks I'll probably be grateful for some input on the exact best time to harvest. So, here are the details:

Specific things I'm thinking/wondering about now:
-one plant seems to have stopped its vertical growth almost a full week before the other. It is shorter in stature but seems more advanced now in bud development. Lots of trichomes compared to the taller one that has very few. Is this sort of variation normal within the same strain sprouted at the same time? Should I expect the taller one to catch up in terms of redirecting its energy from stretching to bud and trichome development?

-the shorter/more resinous plant seems to be displaying some minor nutrient burn (yellow tips on newer growth) while the taller one shows almost no effect. They have both been fed and watered exactly alike, with very low nutrient doses- generally 1/4 the Fox Farms recommended dosage of Tiger Bloom. Could this be because the ocean forest soil is already so full of various nutrients? The last watering was just a pure water flush, and I'm not sure what to do going forward with feeding. Also not sure why each plant would be reacting differently to the same factors.

- I have read conflicting views about removing lower leaf growth during flowering. Especially with the relatively weak lights I've got, I know there is very little penetration to the lower areas, and some of the growth down there has no chance of getting much light. The leaves themselves near the bottom look generally healthy, but I can't imagine they are helping the plants much. It seems like they must just be sucking energy and resources for the plant to keep them alive. Just wondering if it would be more help or harm to remove some of the lower growth that is mostly in the dark.


Here are some current pics taken today, which is exactly 7 weeks since they sprouted: 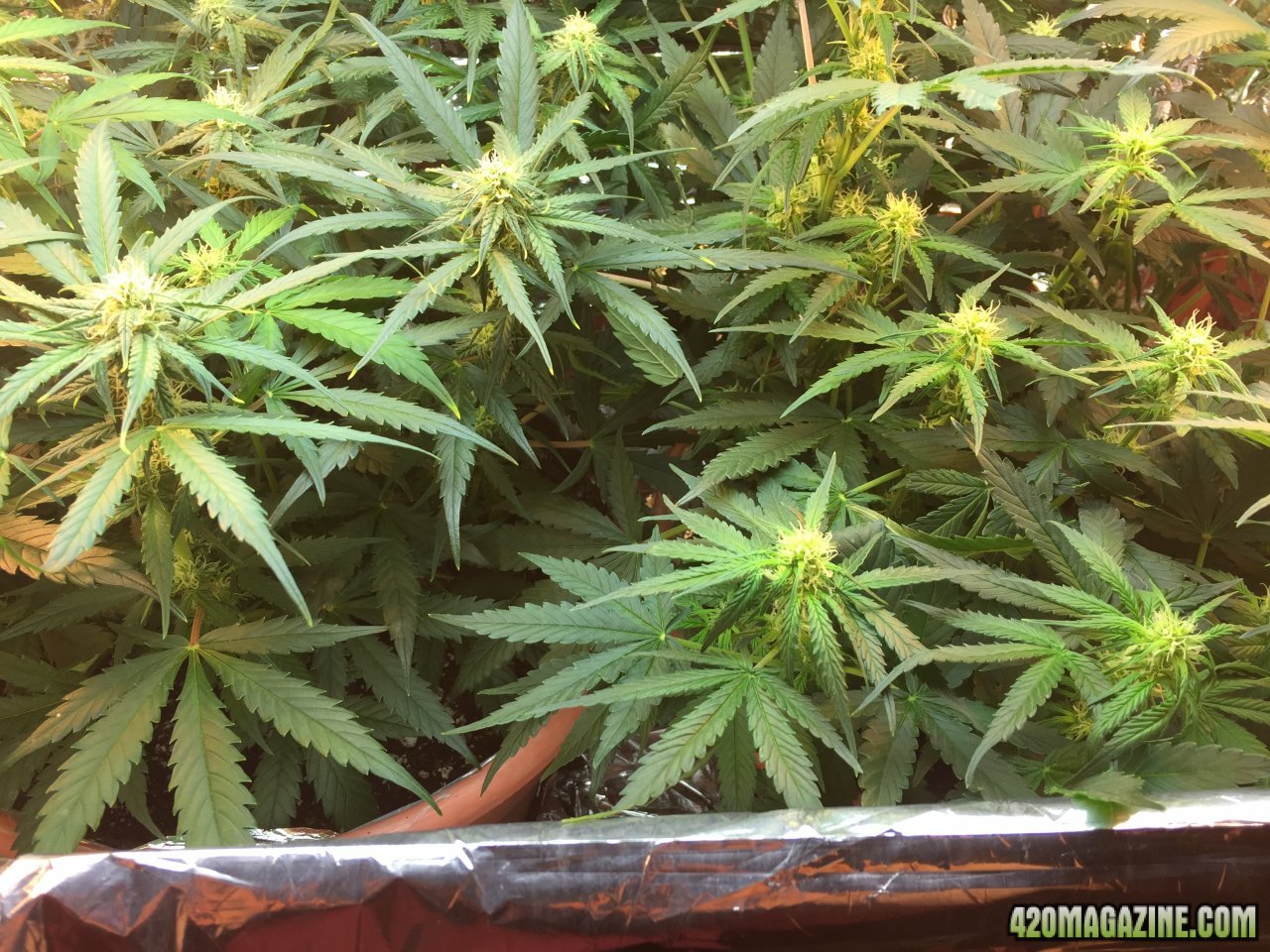 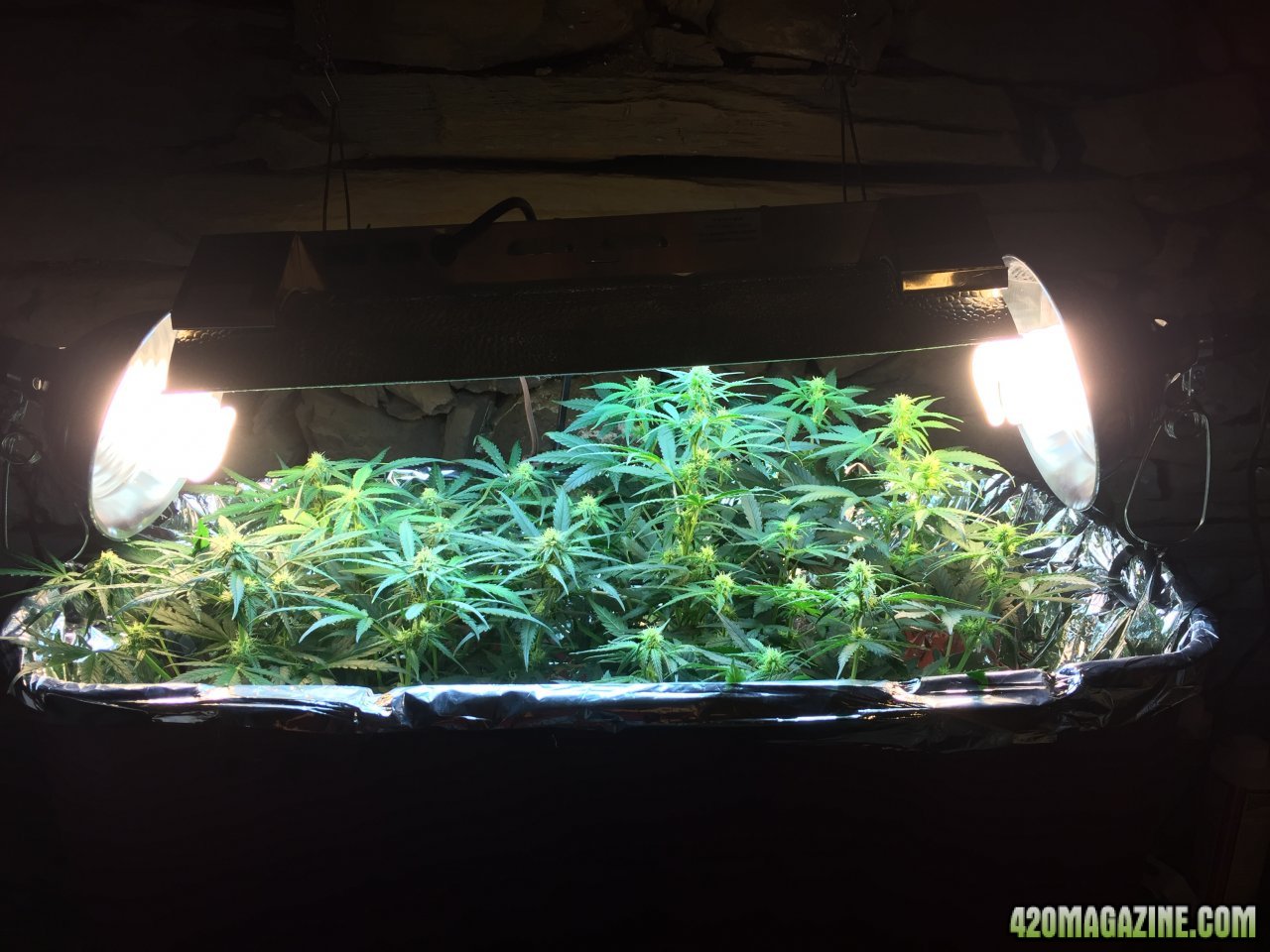 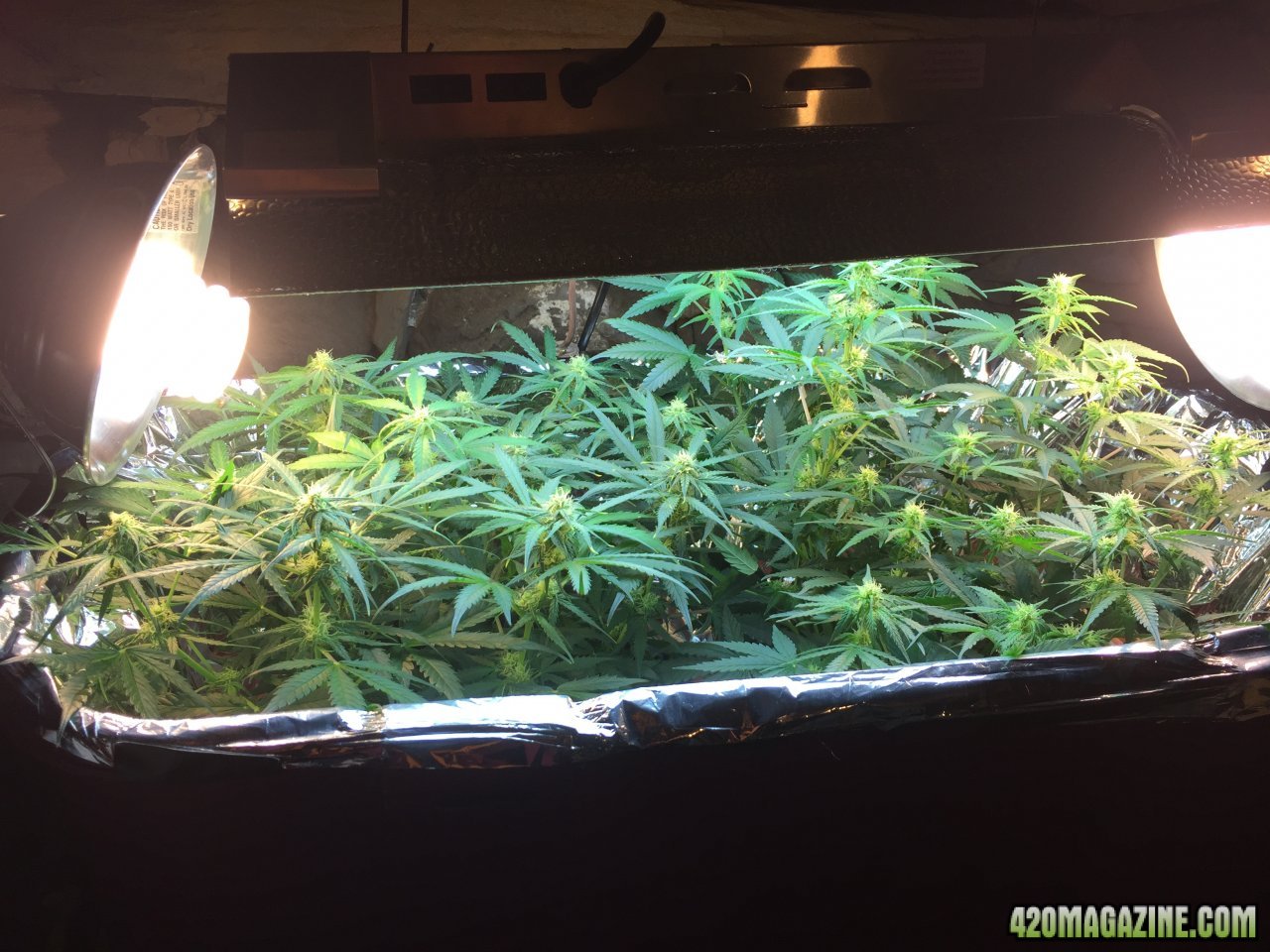 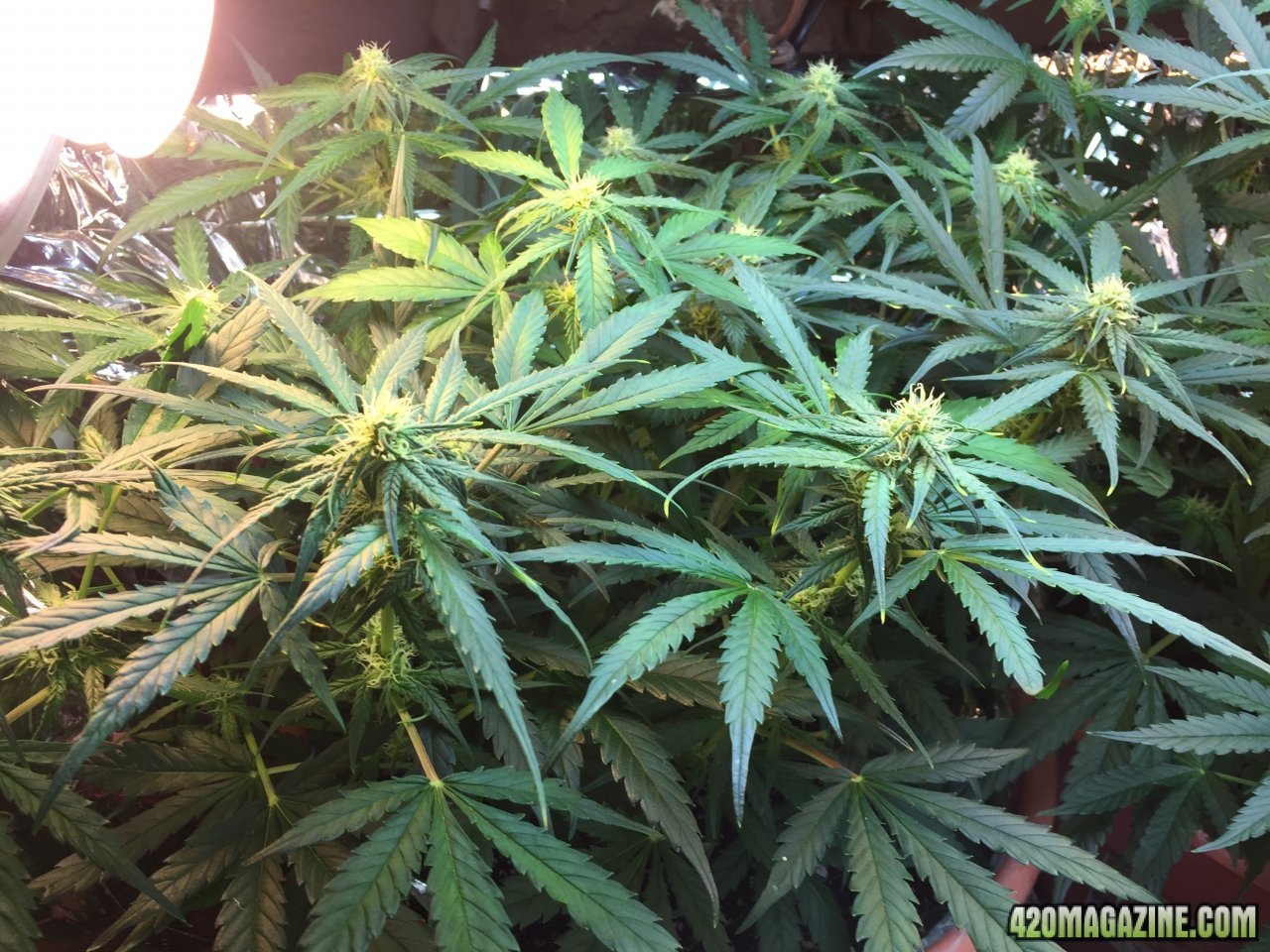 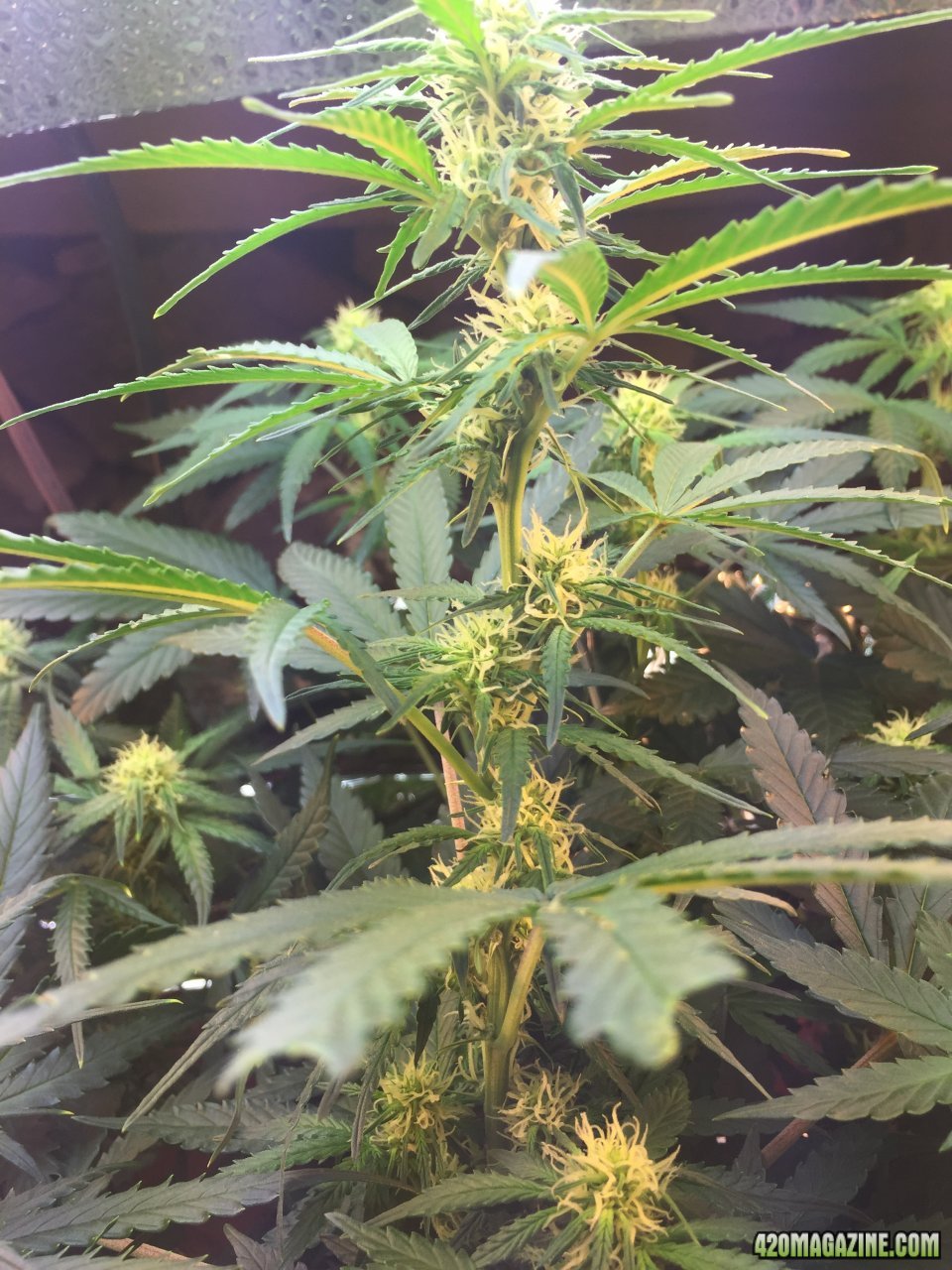 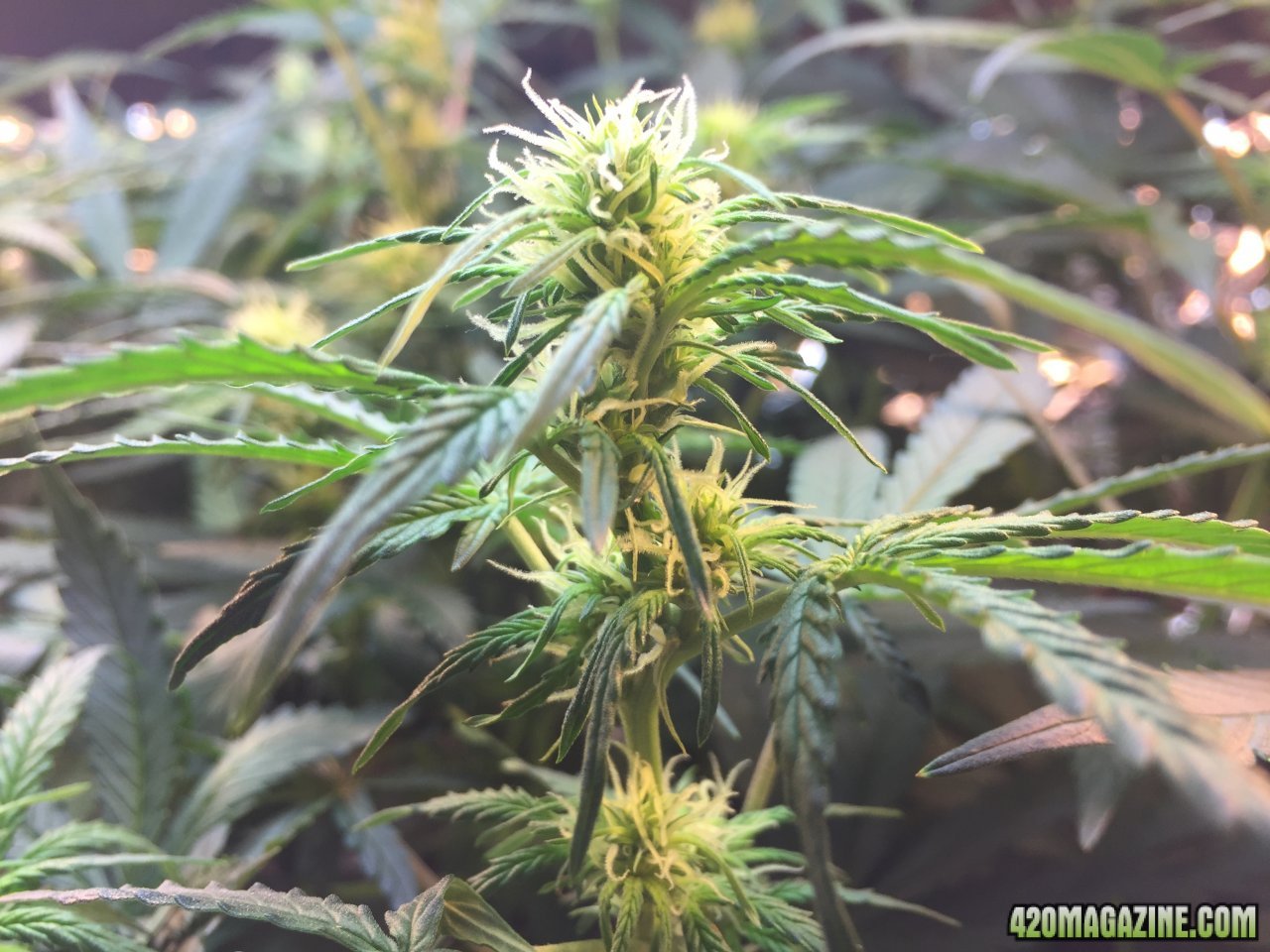 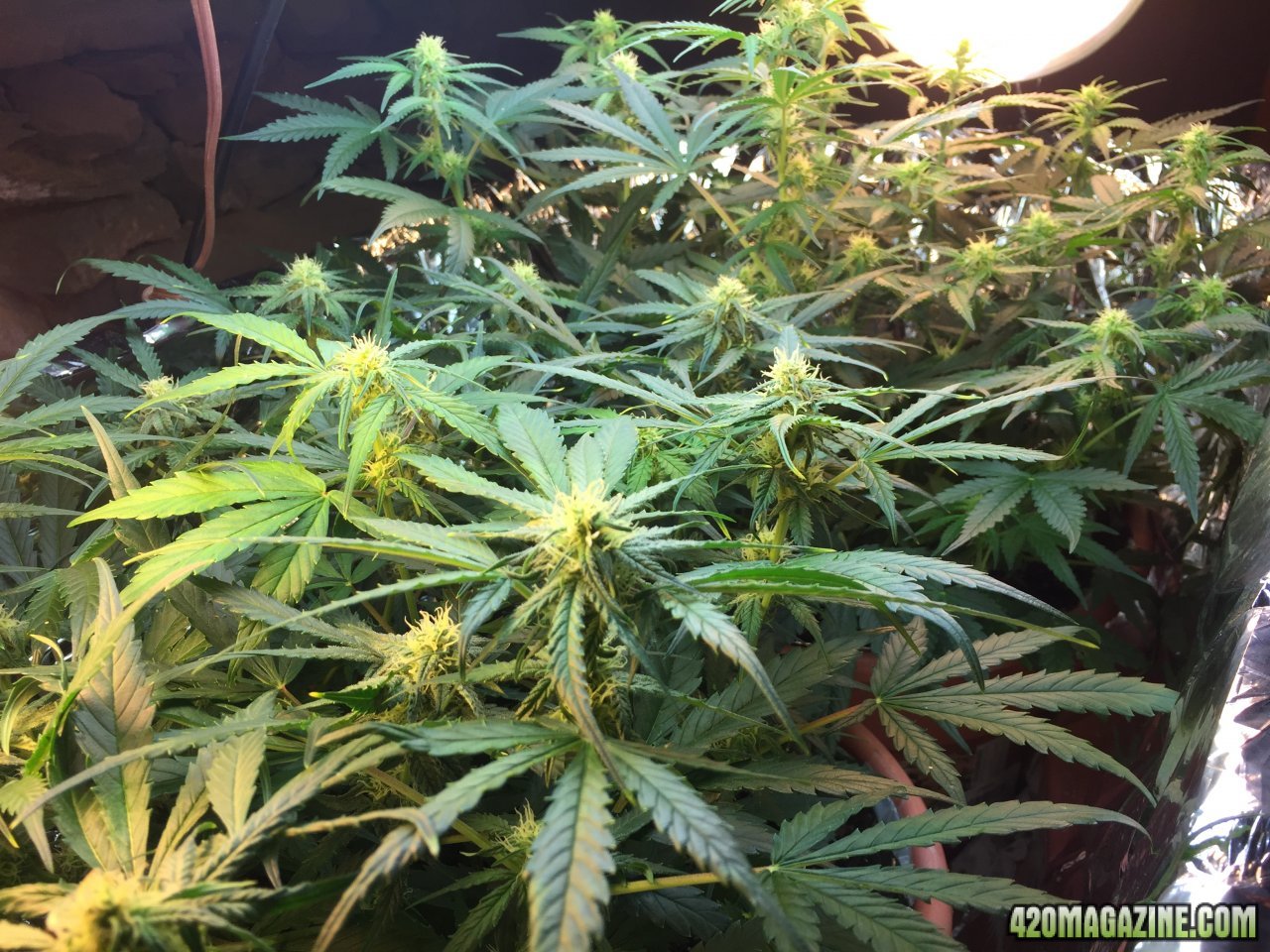 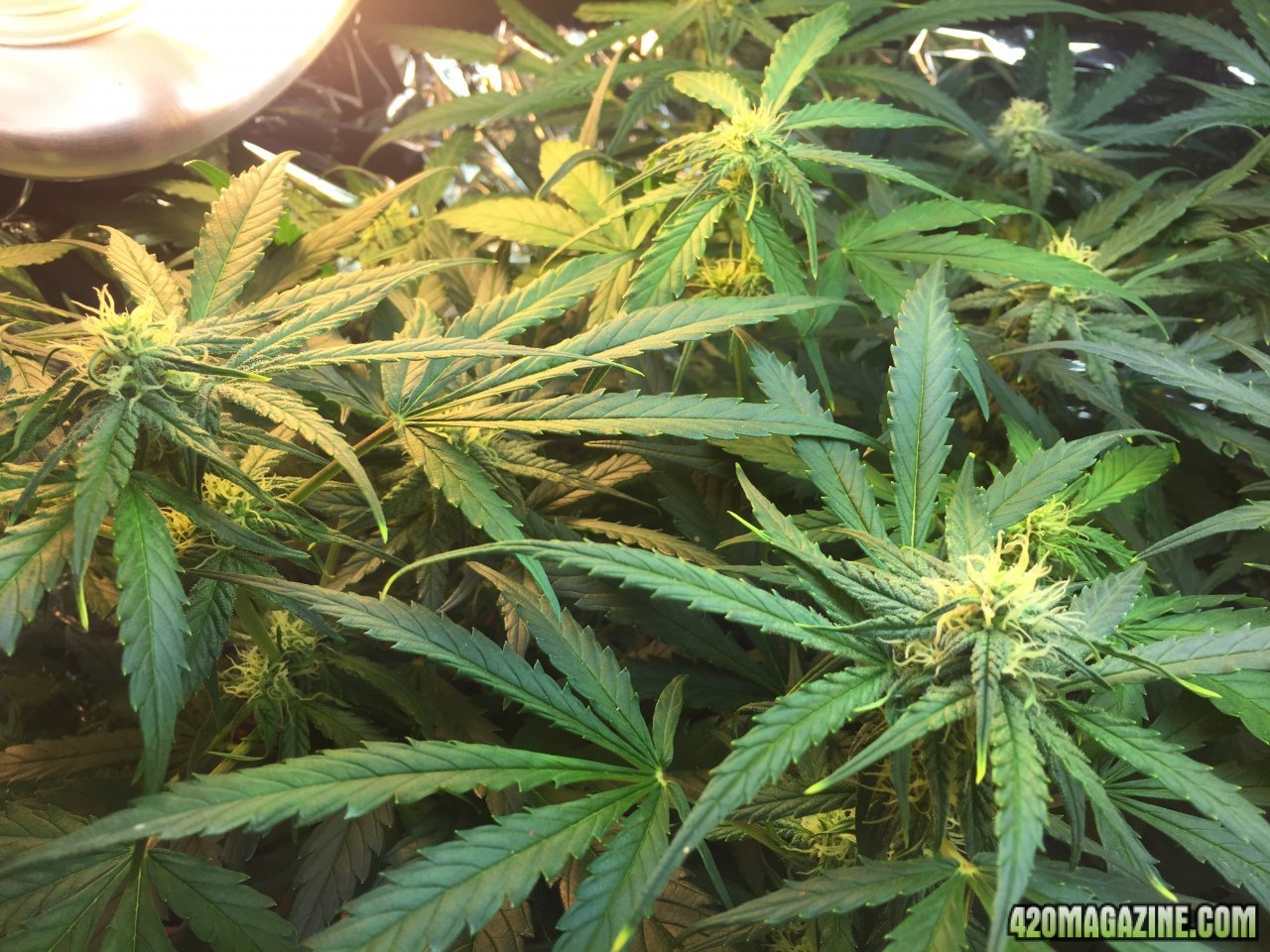 To be honest - I think they look great. It is not uncommon for one plant of the same stain to have different growth characteristics and height. It is like humans ... many siblings of the same sex are different height and weight.

Thank you Troy, I appreciate the input and it's good to hear someone knowledgable confirm that I'm on the right track.

So, I will try to thin out some of the lower leaves that are in the dark, and otherwise I'm going to continue doing as I have been, going easy on the nutrients and perhaps adding a couple more CFL bulbs in hopes that the buds will fatten up significantly over the last couple weeks. I am figuring on another 3-4 weeks total until harvest. I just ordered a little jewelry magnifier so I can get a good look at the trichomes and try to get the timing right.

Will update again shortly, and am glad to hear from any and all who have any words of wisdom!

Your on the right path to a bountiful harvest. More light will definitely benefit the girls. I recently shifted to all COBS in my flower tent and think I'm giving them a little too much light so have raised the lights a bit and turned down the driver. My top leaves were turning light green and some of my upper leaves were toco shelling up.

The little Jewelery Magnifier will work for you. It takes a little practice and you have to get in close and personal to get it in focus. In addition to a jewelry loupe I have a couple IPhone clip on 30-60X magnifiers. It is difficult to get a picture as you have to hold it so steady. I think you are just about right with the 3-4 weeks to go. My plants are about the same stage as yours.
Completed - Troy's 2nd - Autos - DP Ultimate & Euphoria, Meph Alien v Tangle, RQS Diesel
Troy's - Freezer JuJu Tincture -
Auto Drip Irrigation for CoCo
Completed Troy's First Grow - Animal Cookies & Platinum OG Clones - DWC & Soil - 2017

Made a few adjustments tonight for some more light as I head into the home stretch. Hung the T5 in a slanted way so it is as close as possible to both plants despite one being a good 6-8 inches taller than the other, and added 2 additional 26 watt 2700k cfl bulbs in clamp lights around the side. If I can find a socket splitter at the local hardware store this week I may be able to get a couple more bulbs going in those clamps as well, but for the moment its a total of 232 watts, though I recognize that its not all hitting every branch fully or equally. However, at least I've now got a pretty even balance of red and blue spectrum light, which I'm hoping will be helpful. My main challenge now is being patient and not going down and staring at them six times a day! 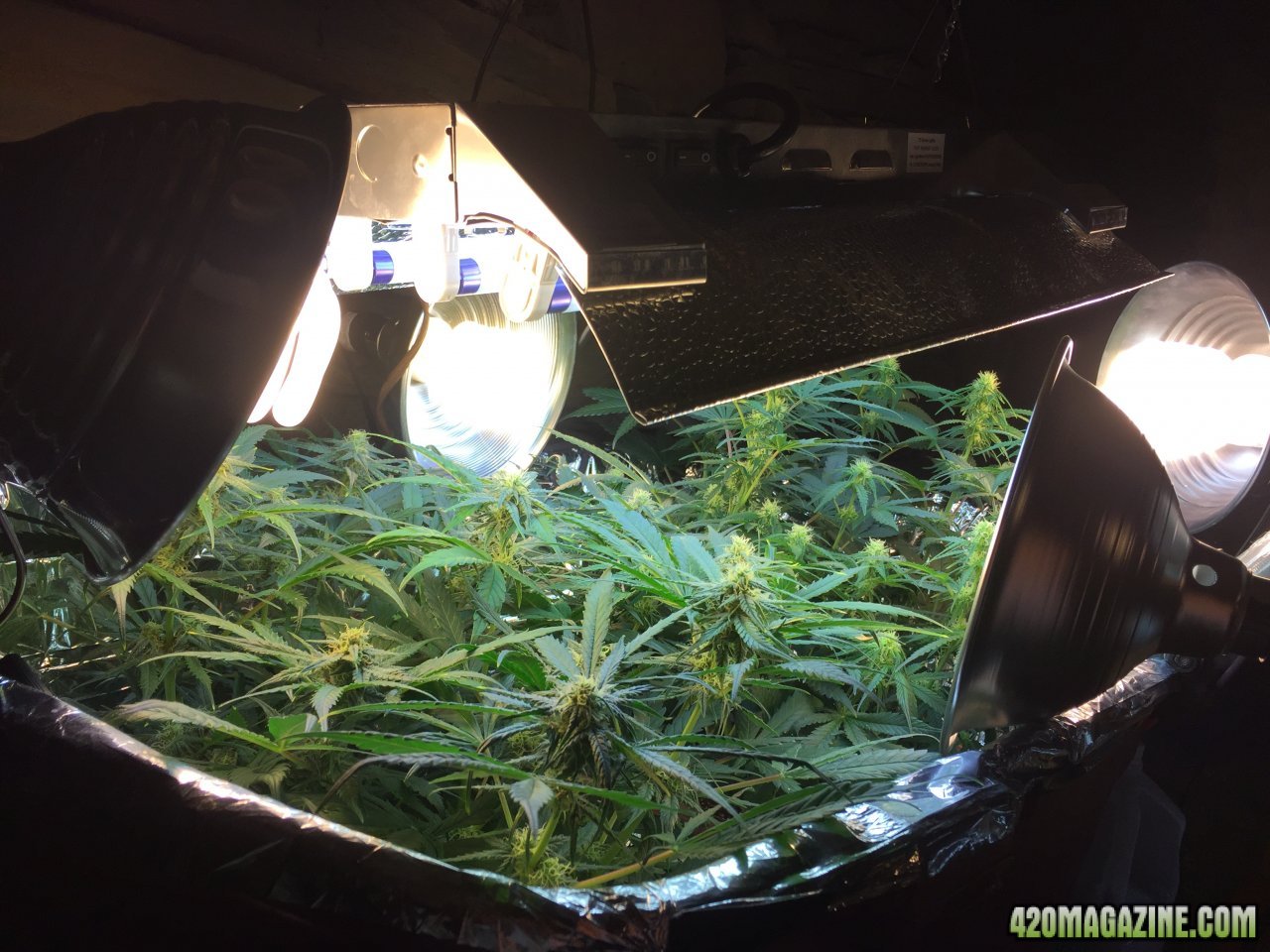 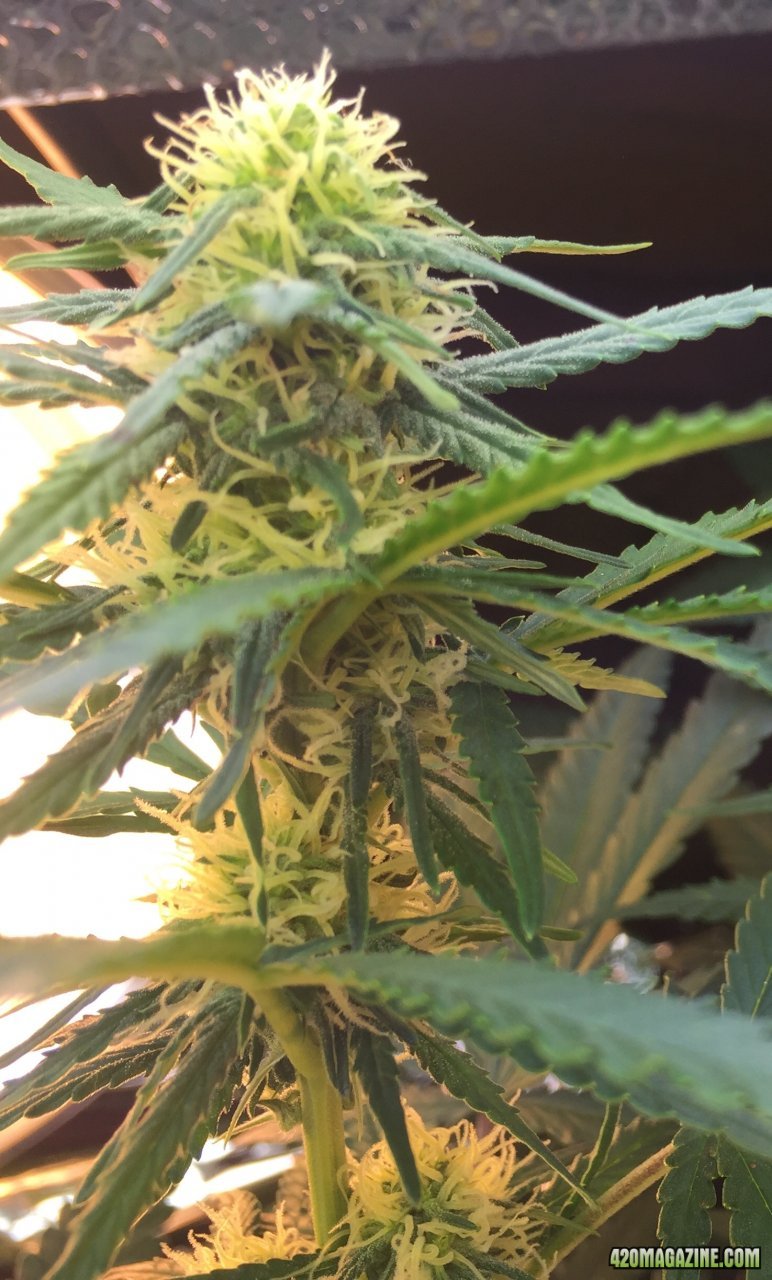 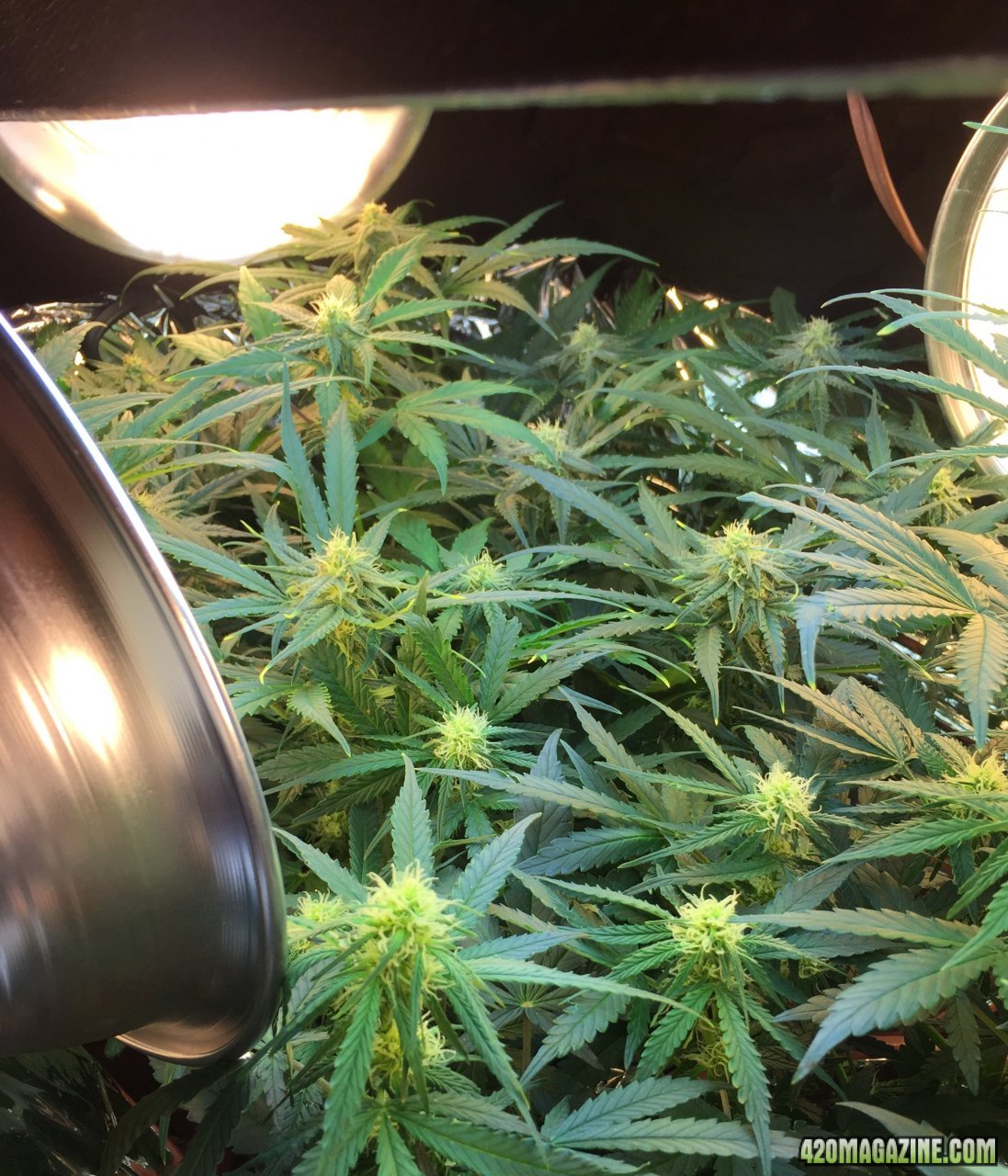 Looks incredible. Just keep an eye out for TOO MUCH LIGHT. T

Just want to provide a wrap up here on this grow journal. All turned out well. I cut the smaller/quicker-finishing plant about 3 weeks ago and the bigger slower one about a week ago. Dried each in paper bags for about 5 days and now all are curing in jars. Buds from plant #1 have already lost their wet hay smell and now have a great fruity spicy aroma developing. I have started sampling and am pretty pleased with the taste and effects: as advertised, 2-3 puffs of Tangerine Dream gives a real boost of energy and creativity that is great for everything from playing guitar to cleaning the kitchen. I haven't weighed it all out exactly but from eyeballing it I'm guessing I got about 1.5 oz from the smaller plant and around 2 to 2.5 oz from the second. I think it was pretty decent for my CFL/T5 setup.
Going to take a little break and enjoy the harvest for a few weeks then will pop a couple of my newly arrived Northern Lights seeds... 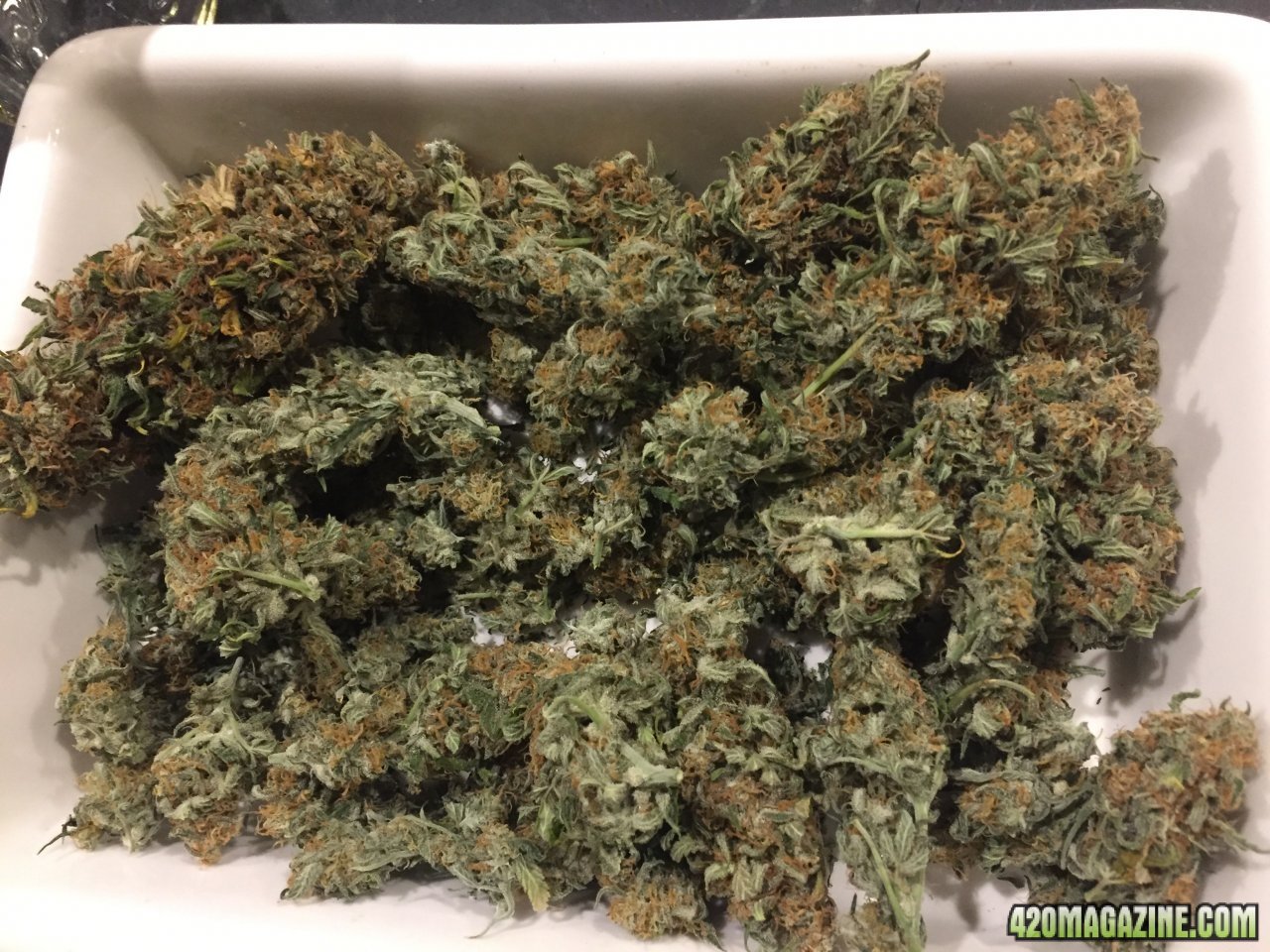 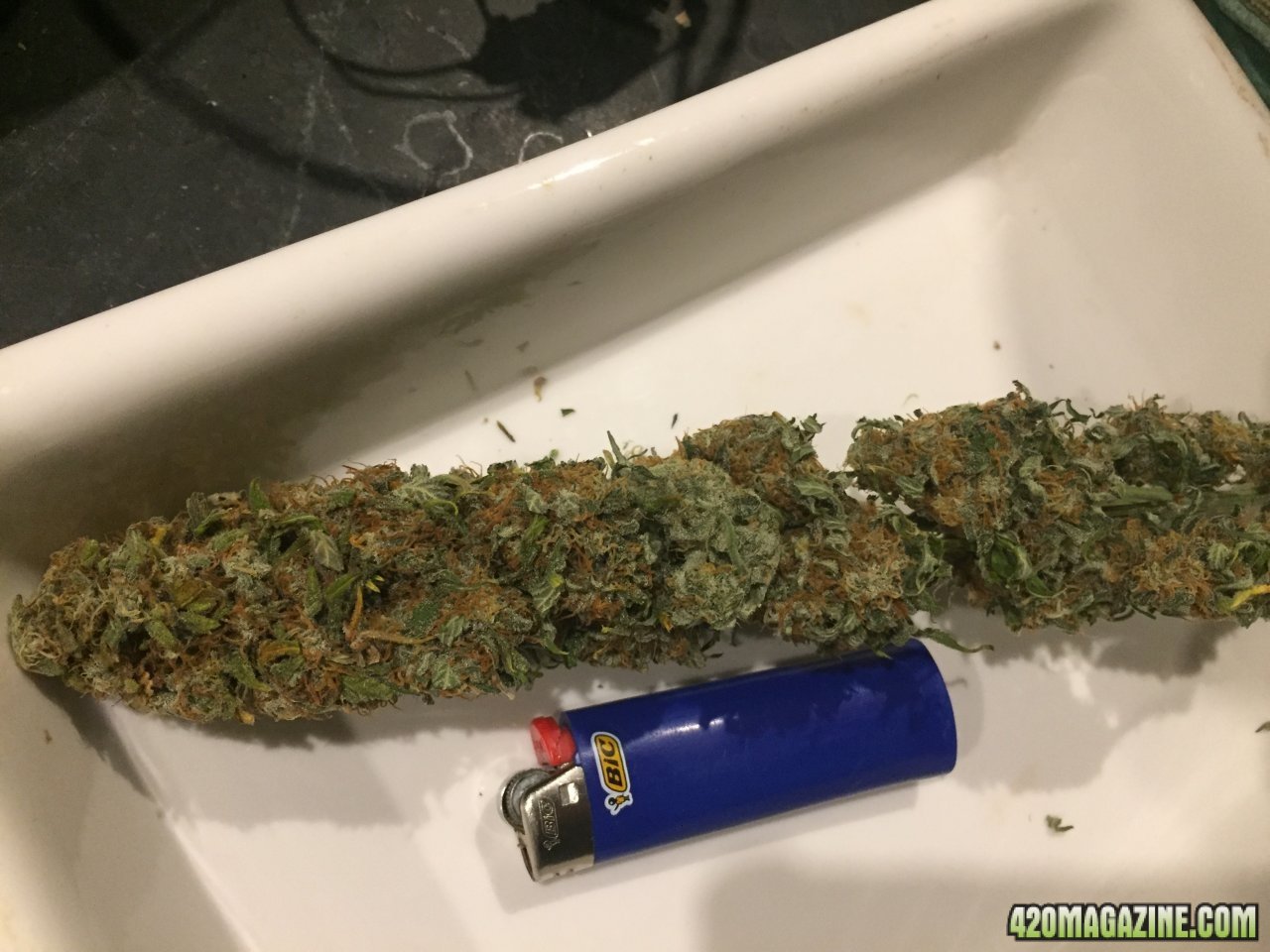 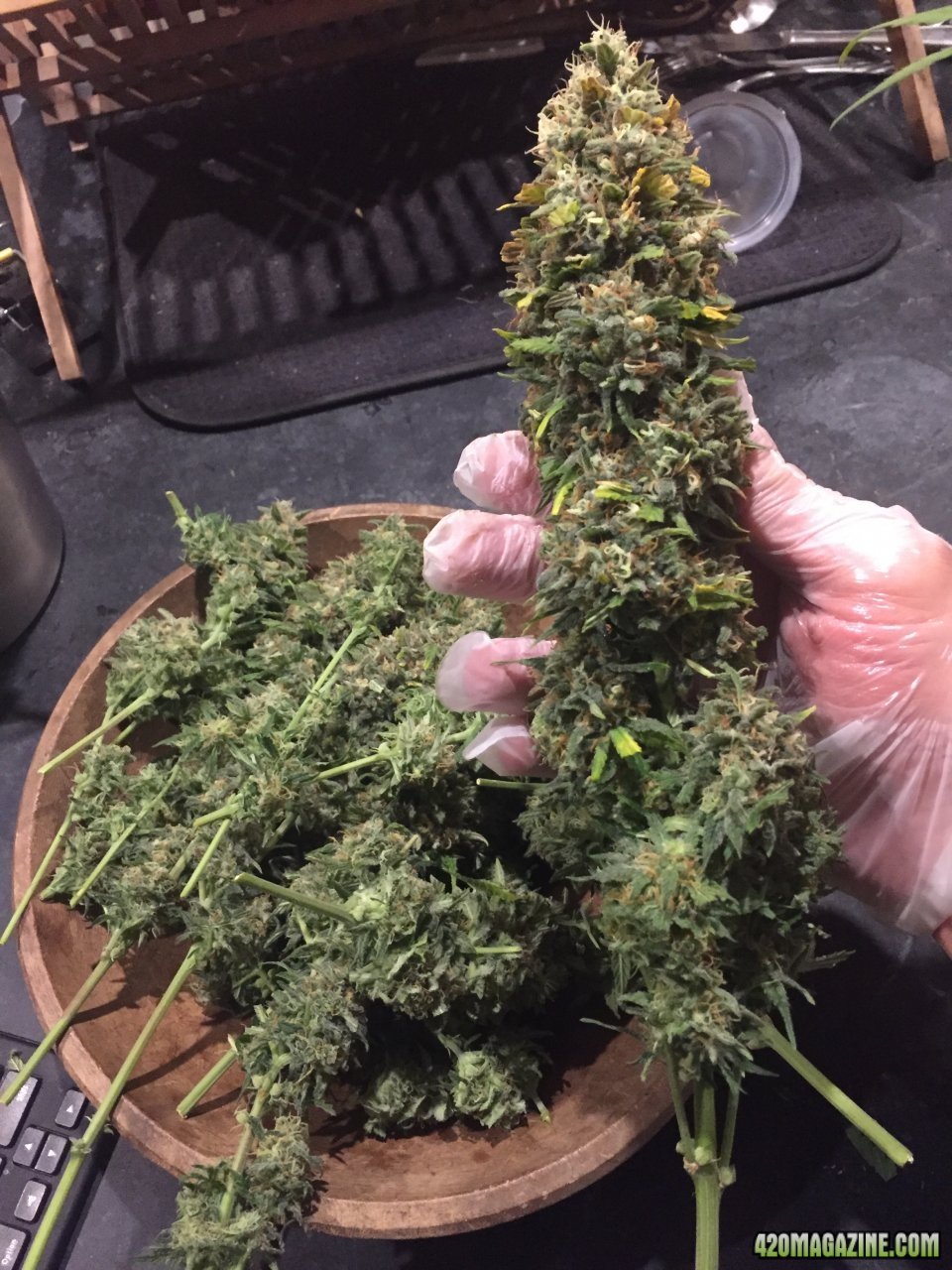 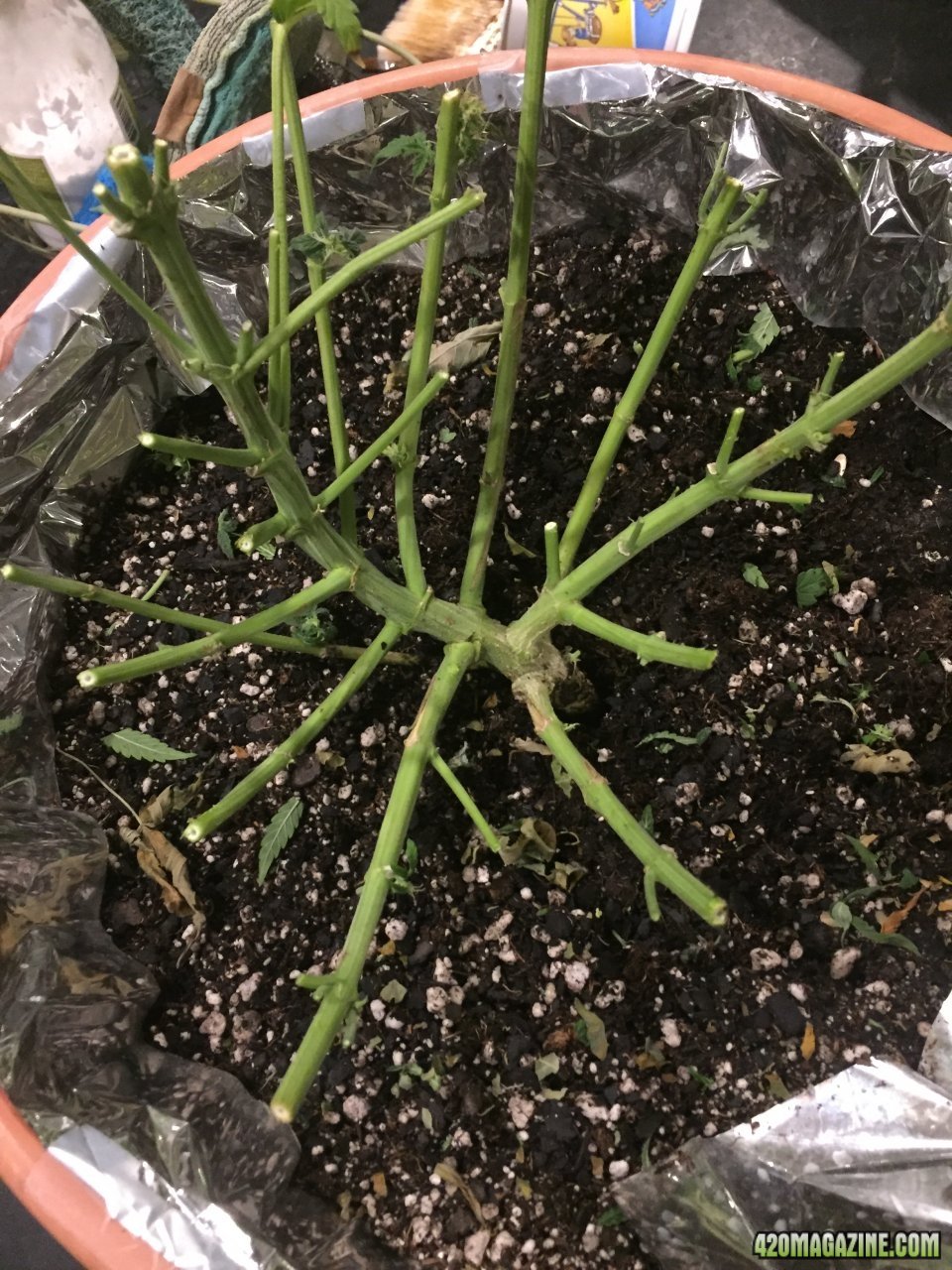