I think the little one should be fine to transplant and the bigger one you watered her so see what she does I think she should come back, it just might take a couple days or so. I would say if the lights are on for a while go check her in a couple of hours and see if she is perking back up. This is what I would do but I have no real experience but it seems like it would be a good starting point. Good Luck I think you will be fine though.
T

alright thanks a lot your a life saver bro. a lot because i feel so relived now haha! and yea i was actually planning on transplanting it today when i got home but then i came to this and didnt wanna put too much stress on the plant ya know. but yea ill check back later and let you guys know what the deal is.

well 4 hours have past and no luck yet. i think im actually gonna add some of the fertilized water and see if that does anything. i was doing a little reading and some people suggested to others on problems like this to add nutes becuase crumpling could be do to phospohorus deficiency and the little yellowing from nitrogen. so well see how she ends up tomorrow and ill let you guys know.
T

hey guys heres the update: i transplanted my bigger plant 3 days ago (wednsday) into a 3 gallon pot. shes comming back to health nicely and most are that nice green color like befofore and are almost looking normal again but the top nodes are still a littttle deformed and twisted. there were a lot of the leaves i pulled off that were dry and dead so most of the bigger leaves are gone but still bushy with a lot of little nodes growing.

my second plant had some issues too. the two long first nodes it grew were yellow with black so i ended up taking them off but the plant is still growing nicely and healthy.

and i started a third plant im not sure if i already mentioned that, that is growing nicely as well.

heres a pic from right after the transplant, it looks better now than from this pic a couple days ago. 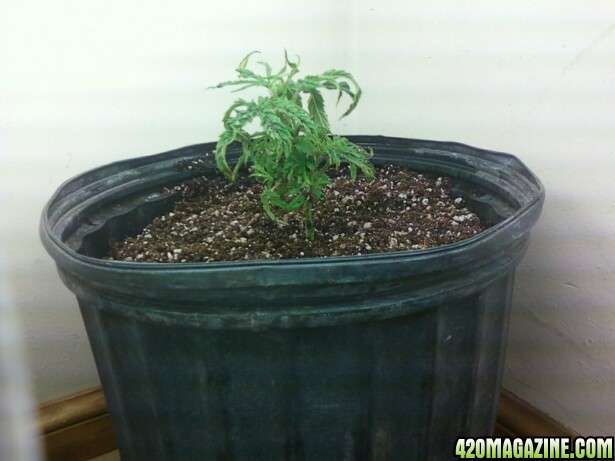 another pic from right after 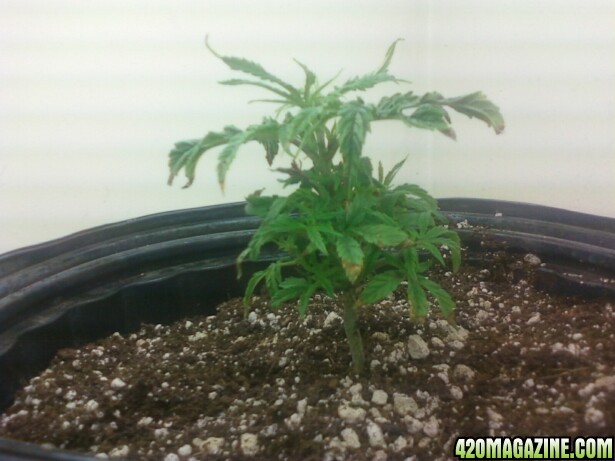 heres my second plant with the nodes before i picked them (I aready took half of one off because it was dead half way down. 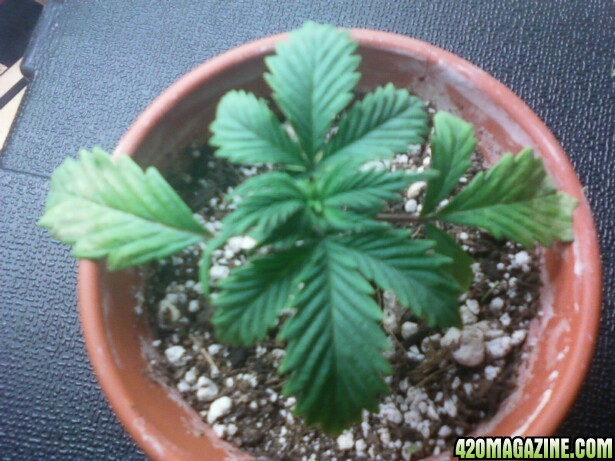 and heres it after i took them off 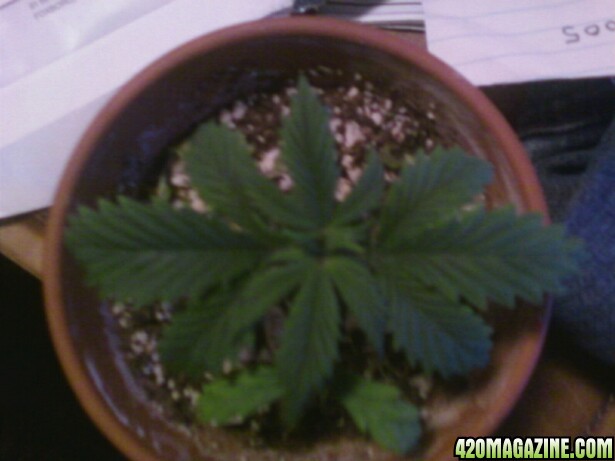 the second plants about 3 inches taller now
let me know what you guys think!

I think those last 2 plants look really good. Do you plan on flowering them all together at different ages/ heights?
Peace, my

the last 2 pics are the same plant just the first pic of it is before i took the bottom nodes off from the drying up. but yea i was planning on starting the flowering with all of them when im ready to start flowering the first one. i planted the last two plants i have growing so i can get a little extra bud with the first one even if its not that much because i wont have the room anyways.

and my first plant looks A LOT better now than it does in the pics in my last post. if i was worried about it at all now its about weather or not the pistils are burnt. ill put some pics up tomorrah.

Cool, good job. I would wait until the youngest plant is ready for flowering and then put them all in. The others will veg a little longer and should produce more bud. Have you thought about cloning? If so, I would snip some a day or two before these go into flowering. Whats the age of these girls?
Peace, my

the big one is 31 days, the second one is 18 days, and the third one is 10 days. yea im gonna wait till the little ones ready, i just dont want the older one to get too big ya know? and i dont plan on cloning these plants. i plan on getting some autoflowering seeds and experimenting with those after these ones finish when theres room.

but heres a couple pictures of the plants. 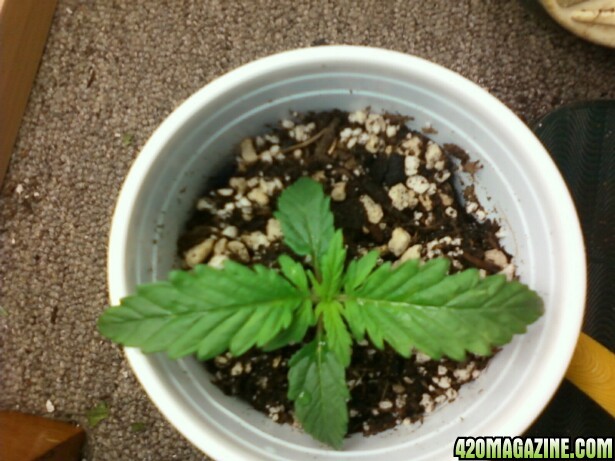 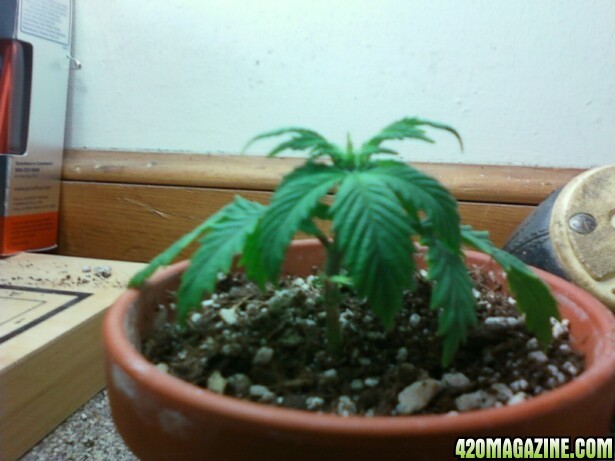 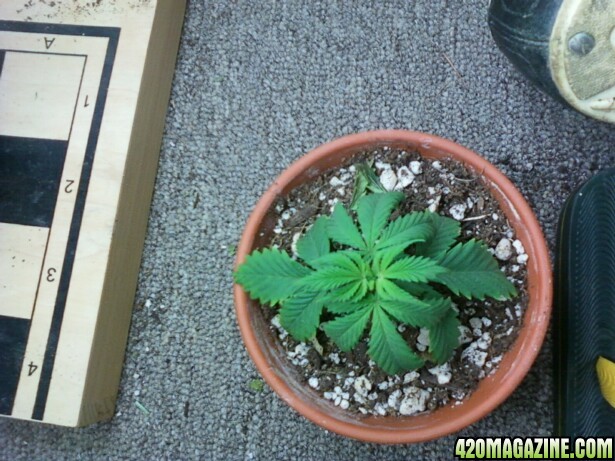 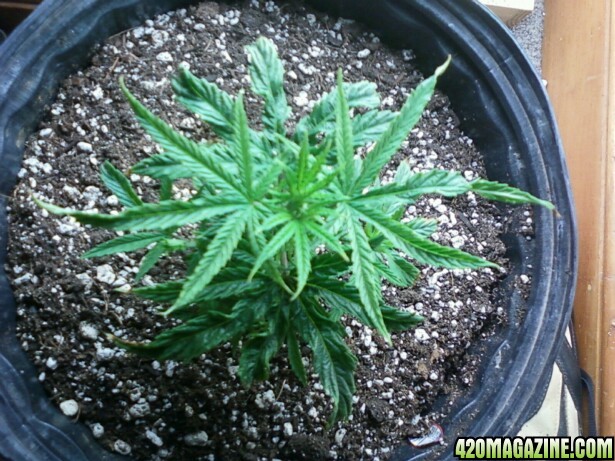 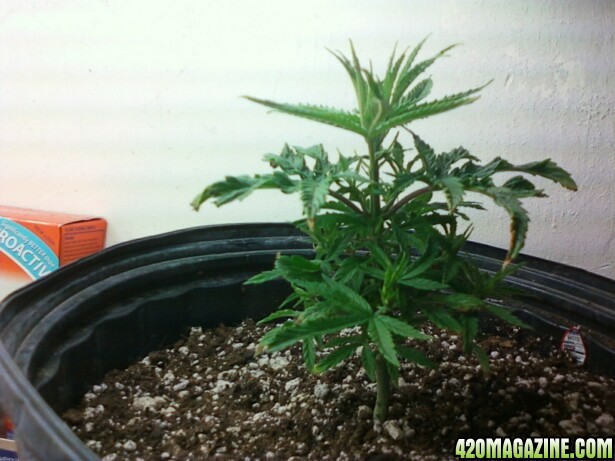 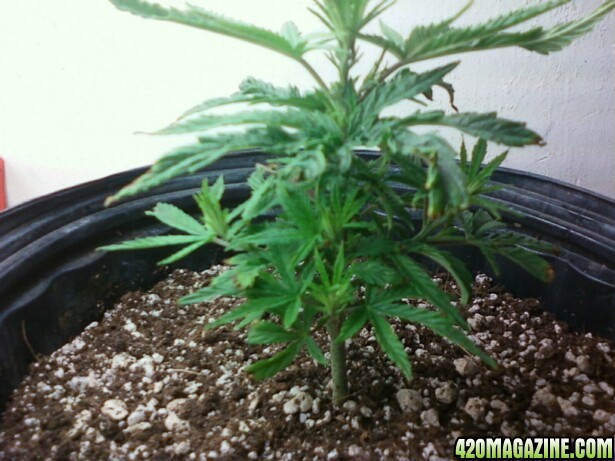 the biggest plant bounced back nicely and bushed out! just hope those pistils didnt burn.

They look much better. My guess is that plant number 2 will be your prize plant! Good work!
Peace, my

thanks guys. and yea that second plant was doing great and growing big and fast up until that incident, now it just seems to be growing very slowly.

but i have another problem now ive been dwelling on and its that im going away this weekend (saturday) until the 4th so thats like 10 days and i dont know what im going to do about my plants because i dont really have anyone to take care of them while im gone... any tips?

First, I would suggest putting the lights on a timer if you have not already. How do you ventilate? You will have to get fresh air in somehow, so maybe a fan blowing into the closet. As far as watering, I would say take a shorter trip. Last resort would be to really soak them before you go. I will think about it a bit more,

Maybe a plastic soda bottle full of water sitting on the soil with a small pinhole? If it lets one drop through every once in a while it might buy you a few days...
Peace, my

i have the lights on 24/7 so would does it really matter if i have a timer or not? and i have a little fan to keep on in the closet. i wasnt using it before because it was too loud but if no ones going to be home itll be fine. for watering, at first i was thinking of those watering bulbs you can get where you just fill them up with water and stick em' upside down in the dirt and they water it automatically, and i had also read too about making one by using a 2 litre soda bottle and just fill that up with water, poking a hole with a pin through the cap, put it in the dirt and inch upside down, and poke a hole in the other end so the air can flow and equate as the water drips out.

good enough for me i guess haha, i can probably put like 4 or 5 around the plant for the time with water bottles. thanks for the help man.

Sounds good, and here I though the pinhole idea was original... haha
Peace, my

little update. the older girl is doing very nicely i think, i gave her a watering with my fert yesterday morning, shes healthy again it seems, green, and growing. but i think she might be growing slower than before. the middle plant is a very nice green and looks great but i think the growing may of stunted because i havnt noticed much of a difference within the last week with it. the youngest plant is growing nice and big and ill put some pics up of them. 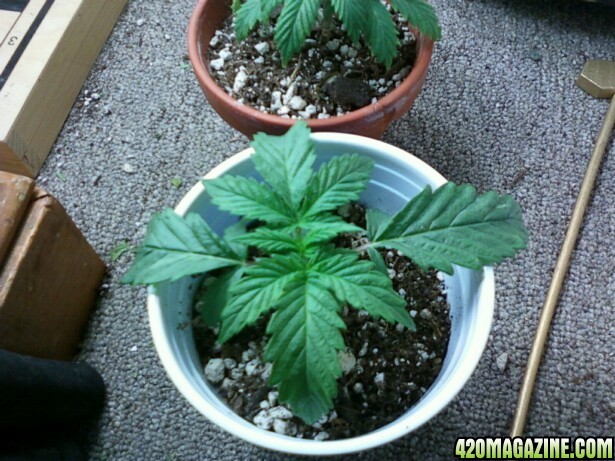 the middle plant i think may be stunted 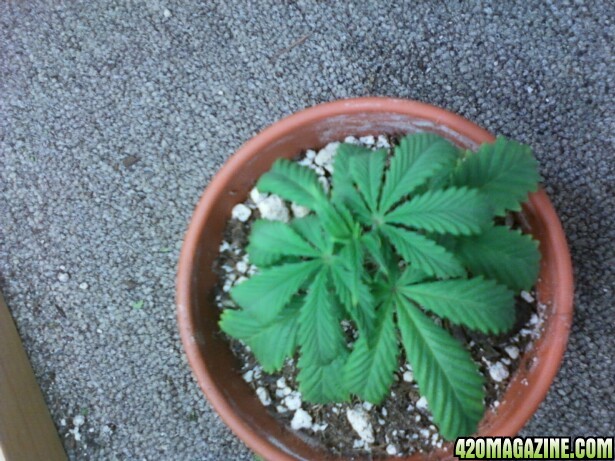 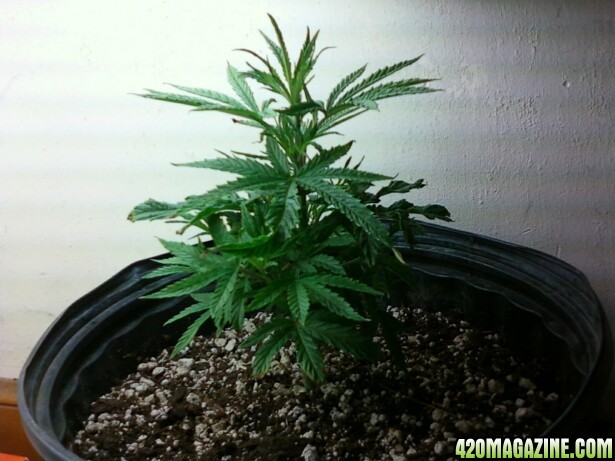 top view of her 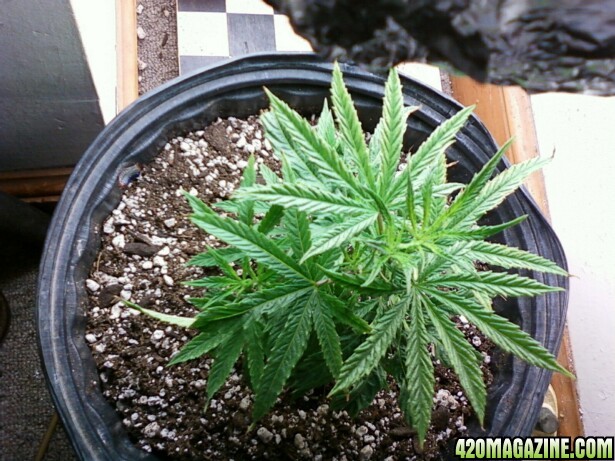 let me know what you guys think! :smokin:

Great job. Growth will slow a bit after transplanting. Some call it transplant shock. I think it is the plant focusing on growing new roots into the new soil. So impressive growth may be happening underground. Next, it could be nutrient issues. Are you adding anything already. I did not add anything until the plants told me to. It may have cost me a few days of growth though. You might want to start with a 1/4 stength nutrient solution. They should be old enough by now.
Peace, my

yea ive been giving it ferts for the past couple weeks at 1/3 strength. but ive noticed some of the new nodes growing are light in color or yellowish and have a dead/burnt look on the edges and tips of the leaves. ive read it could be a couple different things but i dont know so im asking here. if you have any of you guys have any idea what could be wrong with it, help would be appreciated. id put a pic up but i only have my phone and its not good enough to show that kind of detail nor get close enough.
T

hey everybody. im still in florida and have like another 5 days to go because i am also driving back to mass from here. so im hoping my plant is doing fine considering i watered it a shitload. my little brother went back today because hes sick so hopefully when he feels better he can go and let me know how its doing and send a pic. ill let you guys know when i get something. have a happy new years everybody!
T

alright guys got some sweet news. my brother checked my plants and said the big one still looks fine and my water bottle attempt is working because one of the bottles on one side of the pot is still 1/2 full and the other bottle on the other side of the pot is 3/4 full still. the other 2 he said were droopy and the dirt was dry so i told him to just water those. everythings going fine!