Every so often, a package of marijuana arrives in Jason B. West’s mail at the University of Utah in Salt Lake City. While Dr. West may not be the only one on campus receiving deliveries of illegal drugs, he is probably the only one getting them compliments of the federal government.

Dr. West’s marijuana supply is decidedly not for consumption. It is meticulously cataloged and managed, repeatedly weighed to make sure none disappears, and returned to the sender (a laboratory at the University of Mississippi) or destroyed when he is done with it.

With financing from the Office of National Drug Control Policy, Dr. West, 34, is creating a model that can identify the geographic origin of cannabis plants based on certain chemical calling cards. The agency hopes to use the research to help decide where to concentrate its resources.

The research, the Marijuana Signature Project, relies on stable isotopes, which are forms of an element like nitrogen or oxygen, that have distinct atomic masses. Long employed in ecological research, stable isotopes are increasingly used for forensic purposes, including investigations into blood doping, arson and trafficking in contraband like drugs and endangered species.

“Stable isotopes are a signature on plant materials and things that are derived from plants,” said Dr. West, a research assistant professor in the university’s biology department. “Using them, you can get information about where something grew and its growth environment.”

Marijuana is the most pervasive illegal drug in the United States, with 10,000 metric tons consumed yearly by Americans in their college dormitories, suburban subdivisions, housing projects and Hollywood mansions.

Although suppliers in Mexico and Canada, especially British Columbia, are gaining market share, most of the marijuana that is bought, sold and smoked by Americans is grown domestically. Six states — California, Hawaii, Kentucky, Oregon, Tennessee and Washington — dominate domestic marijuana production. Beyond that, relatively little is known about where the drug comes from and how it makes its way around the country compared with what is known about harder drugs.

The drug control policy office is betting on stable isotopes to identify unique markers in marijuana, distinguishing it not just by geography but also by its cultivation method — for example, indoor versus outdoor.

Marijuana’s status as an illegal substance is controversial, as is the extent of its criminalization and the resources to control it.

Dr. West said his involvement in the project was not tied to any particular policy judgment. “I strongly believe that part of the picture in any policy development has to be the best possible science, and in cases where my work can contribute to that, I think that’s great,” he wrote in an e-mail message.

Carbon, hydrogen, nitrogen, oxygen and sulfur, the base elements of nearly everything on the planet, exist in multiple forms, each with a specific atomic mass. These are called stable isotopes, as opposed to radioactive isotopes, which are unstable.

Many natural processes discriminate among these isotopes, a phenomenon called fractionation. A phase change from gas to liquid, for instance, weeds out the lighter isotopes, which tend to stay behind in the gas form. When water rains from a cloud, the water molecules in the rain contain heavier oxygen and hydrogen isotopes than the water molecules that remain in the cloud.

The opposite occurs during evaporation, when lighter isotopes diffuse into the atmosphere faster than their heavier counterparts. Fractionation also occurs in enzymatic processes like photosynthesis.

In the marijuana project, Dr. West has found that cannabis plants grown in different regions of the country contain distinct signatures based on the isotopic composition of each region’s water.

“Plants maintain the fingerprint of the climate and the environmental conditions,” said Gene Kelly, a professor of soil science at Colorado State University and an expert on stable isotopes, who is not affiliated with Dr. West’s research. “Theoretically, high-elevation pot plants should have one sort of signature, coastal California plants another.”

Already, the project has hinted at some potentially surprising findings. The marijuana that makes its way to Dr. West’s lab has come primarily from drug busts. One specimen came from a medical marijuana center in San Diego that the Drug Enforcement Administration raided. While drug officials had assumed that the marijuana sold at the dispensary would have been largely locally grown, the isotope research suggested that just a small percentage was grown in the area. 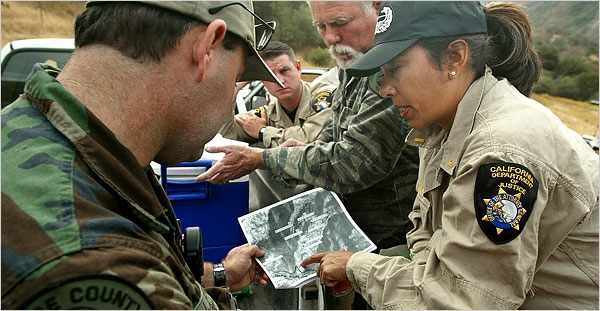 “There’s considerable movement from multiple sources,” said Dr. Murray, the chief scientist of the drug policy office. “And it ends up that multiple streams of marijuana were present in a single location being offered for sale.”

While he cannot pinpoint a plant’s exact home turf, Dr. West said he could, with increasing accuracy, place it in within a region, called an isoscape. On a map, the regions look like undulating bands of color, with differences visible both north to south and west to east. Dr. West has created computer models based on these isotopic variations and other factors and is now trying to increase the accuracy of the models.

Ratios of isotopes found in water vary from north to south largely because of temperature differences. When condensation occurs at lower temperatures, — at higher latitudes and higher elevations — lighter isotopes remain in the water. The east-west variation is mainly because of the movement of clouds that form over the oceans. As clouds move over land, each time rain falls the heavier isotopes fall to the ground while the lighter ones remain in the cloud.

“The rain gets lighter and lighter as the cloud moves across the land surface,” Dr. West said. 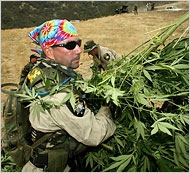 The more topographically unusual the growing area, the easier it is to identify.

“If it were a sample that grew, say, in the mountains of Colorado, it would be relatively easy to give a fairly restricted source location,” Dr. West said. “Something that may have grown out in Kansas would have an isotope ratio that would be consistent with a fairly large region.”

To fine-tune the models, Dr. West is examining other isotopes found in the marijuana plants. Nitrogen isotopes, for example, give clues about whether fertilizer was used and what type. And carbon isotopes can show whether the plant grew in a wet and shady or dry and sunny climate, based on how a plant’s physiology is affected by water availability.

Dr. West is not limiting his stable isotope investigations to illegal substances. He is also using the isotopes to determine the origin of wine grapes, a potentially important application for the field of terroir. His research has shown that regions of the western United States impart their own isotopic markers on the grapes grown there.

“There’s not much out there that you can’t run stable isotopes on,” said Jim White, a geologist at the University of Colorado who runs the stable isotope laboratory there and is not connected to the marijuana project. “If I fed you with a food that had a unique isotopic signature and then measured your breath, I could see how quickly you were metabolizing.”

Dr. White said that back in graduate school, he and his friends used isotopes to find out how long it took for the water in their bodies to completely cycle through. The experiment relied on several types of beer with differing isotopic ratios.

Dr. West believes that his forensic investigations will have wider applications, which may include answering questions about global climate change.

“I think it has been a real two-way street between these targeted forensics questions and more general ecological questions,” Dr. West said.

Dr. Kelly agreed. “This shows us that there are things we do in very basic research that have real-world applications,” he said.

Meanwhile, Dr. Murray is optimistic that the Marijuana Signature Project will help the agency better understand and control the flow of the drugs.

“We can’t go out and find this information because it’s an illegal activity where they shoot you in the back alley if you try to find out,” Dr. Murray said. “Today we’re making guesses. This will guide us toward a scientific basis.”

Re: Telltale Isotopes in Marijuana Are Nature's Tracking Devices

What a worthwhile project... for a worthless agency, the Office of National Drug Control Policy (DEA).

As the good Doctor says, the Marijuana Signature Project has real world applications, i.e. global warming, wines, beers and of course all foods. This is truly great and exciting research.

215-er/OCBC/bpg/norml-ca/ASA-ca
Holding onto anger is like grasping a hot coal with the intent of throwing it at someone else; you are the one who gets burned. - Buddha
Z

how about testing beer for poisonous pesticide resides along with foods

May 10, 2007
Blob
B
K
Pennsylvania's Office Of Medical Marijuana Gets Director