Testing Of Colorado Marijuana For Contaminants To Begin This Year

Months after ordering tests to determine the potency of Colorado-grown pot, state regulators are zeroing in on another concern: How sick one can get from a bad batch? Sometime in the coming months, recreational marijuana producers must begin testing for bacteria, fungus, heavy metals and solvents before their products reach store shelves. Four labs in Colorado will test for levels of E. coli, salmonella and aspergillus, a fungus that can cause allergic reactions and lung infections. They'll also look for butane and other solvents used to refine marijuana into concentrated oils, as well as heavy metals such as arsenic, cadmium, lead and mercury.

Businesses that fail to meet purity benchmarks cannot sell anything from that batch. But opinions differ on how prevalent, and how dangerous, such substances are in marijuana sold in Colorado's burgeoning pot industry. The new requirements do not apply to pesticides, which aren't subject to across-the-board testing. Nor is medical marijuana regulated for contaminants. And it's unclear when the testing mandate will take effect. Regulators had planned to begin mandatory tests Oct. 1, but now it is more likely to be "by the end of the year," said Lewis Koski, director of the state's Marijuana Enforcement Division. He wants to conduct at least two months of beta testing - essentially, testing of select businesses to ensure the process works.

"What we're trying to do here is very unique," Koski said. "And there isn't a set of best practices that exist in other jurisdictions that we can follow." Owners and lab directors for two of the state's certified labs expressed marginal, if any, concern that they would find high and widespread levels of contaminants once mandatory testing begins. "My feeling is that really, this is not as big of an issue as you might think," said Peter Perrone, laboratory director at Gobi Analytical, a certified lab that, as of mid-August, was finalizing its testing process for contaminants. "It's just a standard practice. It's a good practice.

"The fact that they're requiring it doesn't mean that there's a problem. It's basically to kind of prevent problems." Sicknesses because of contaminated marijuana are not among the state's list of illnesses that must be reported to public health officials. As a result, statistics are rare or nonexistent for admissions to Colorado hospitals for marijuana-related illnesses, especially due to contaminants. Neither Memorial Hospital nor Penrose-St. Francis Health Services track admissions for people suffering the effects of contaminated pot.

Several patients at Denver Health's facilities have, despite having used marijuana in the past, shown up pale and sweaty with dilated pupils and complaints of nausea. The symptoms suggest a reaction to pesticides, said Dr. Christopher Colwell, Denver Health's director of emergency medicine. But he could speak only anecdotally, because patients often are treated with medication and released, he said.

"If you want to smoke marijuana - and my suggestion would be you don't - but if you want to do that, and it's legal now, then be very clear as to where it's coming from," Colwell said. Once mandatory testing begins, packaging must say whether a product has been tested for contaminants, just as it must for potency. Tim Cullen, co-owner of Colorado Harvest Company, plans to use the same lab testing his products for potency when contaminant testing is mandated. His business produces about 125 pounds of dry cannabis a month, and he said he tries to ensure his product is clean of foreign substances.

Mostly, that means being meticulous about his indoor growing climate, while making sure employees do not bring pests into the building. He has only one outbreak - a sudden surge of gnats - in three years. Cullen has a particular interest in testing because he also produces marijuana oils. For that, he often purchases additional pot from other growers and he wants clean plants. "We're excited about these new rules," Cullen said. "Because I really think it will give us the ability to look at test results and work with people who are really doing it right, with the consumer in mind."

Colorado marijuana and agriculture regulators are drafting regulations for pesticide use on marijuana plants, because pesticides regulations are typically set at the federal level. With marijuana still a federal illegal schedule I drug, no such guidance exists. Compounding matters: While a pesticide might be safe for some foods, little is known about igniting and inhaling some pesticides - as would often be the case with marijuana. "It is difficult because typically (pesticide) products are tested on crops that they want to be used on," said Mitch Yergert, director of the Colorado Department of Agriculture's division of plant industry. "And so there is a gap of information there."

The state has banned some pesticides, but it has yet to release a more-defined list of chemicals that growers can use. Koski did not give a time frame for all mandatory testing, though he said some producers may be tested if complaints or suspicions of misuse arise. Regulators in Washington, which also legalized recreational marijuana sales, mandated testing for some solvents, bacterial contaminants and potency when sales began in July, but that program remains in early stages. "The irony is that medical marijuana patients often are not buying things nearly as clean as what you'd get in a recreational system," said Brian Smith, spokesman for the Washington State Liquor Control Board, which regulates marijuana. "And the reason why is that medical system is unregulated." 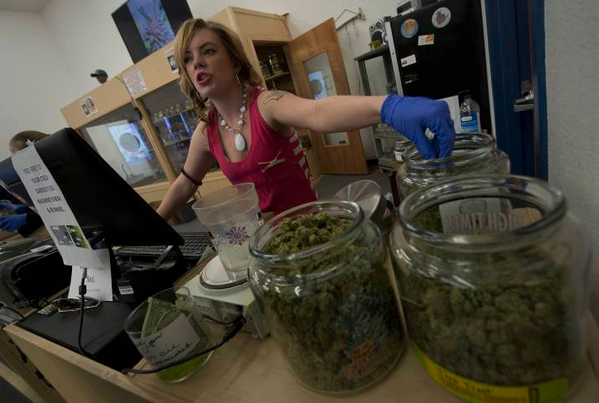 J
A Look At The Evolution Of Marijuana Purity Testing