So as most of us know, Cannabis is made up of dozens of chemical compounds called cannabinoids (Delta-9 THC is just one of many). One cannabinoid is called THCV and is supposedly found more commonly in Sativa strains. It apparently attributes to a more "euphoric" high among other unique attributes such as being a painkiller. After doing a bit of research I recently found out that different cannabinoids have different boiling points - including CBD, THC, and THCV. THCV seems to have the highest boiling point of any of the cannabinoids - and it's a boiling point that is higher than many vaporizers go, or at least higher than many people prefer to vaporize, for health reasons.

This leads to my question: could this mean that by vaporizing Sativa-dominant strains at temperatures under 220C (see chart below) that the user is not getting the benefits of the THCV cannabinoid and therefore not getting the same effect that a sativa strain would provide if smoked?

It would be very much in line with my own experience; after buying a Volcano, a Pax, and a few other vaporizers, I realized that none of them gave me even close to the same feeling as smoking, but this was mainly with Sativa strains. I still find that I can vaporize Indica strains at low temps and get the sedative / insomnia-relief effect that I use Indica for. But with Sativas there was so much less of that classic sativa rush when vaporizing; it felt much less psychoactive as well - more physical and medicating.

Has anybody else heard of these different boiling points, the prevalence of THCV in Sativa over Indica and whether or not there is any legitimacy to this whole question of vaporizing Sativas?

thanks in advance for any input
A

Wassup spacejunk.
can't believe you had to wait 2 years for a reply. i thought more Vapers woulda noticed by now. I've had my Volcano for a month now. and I'm in Southern Africa. lots of THCV down here.

but it doesn't matter, I've grown to appreciate the clear-headed, functional high. if i took the dial to 9 i'd be a vegetable by now.

In my experience so far, when i go past 200C (6.5 on Classic) the 'vapor' is actually smoke cos it irritates my chest and stinks up my room. so if im vaping (on any device) above 200C, i might as well enjoy a joint with RAW paper.

Avi, you had to wait almost a year for your reply. Maybe someone will reply in 6 months to me.

THCV is known to produce a more energetic high. Based on the boiling point of it, you might not be getting much at low temps. I'm not sure, but I think some probably comes off at a lower temp. It would be very interesting to try vaporizing some Doug's Varin at variable temps to see how vaporizing works with it. Then a comparison to smoking it should be done.
Check out my Grow Jounals​
Grape OG - Feminized - The Cali Connection -in progress​

Check out my journal, girl scout cookies grown in a cabinet - complete​
F

cookieman you've only had to wait a couple months for a reply WOOOOOOOP.

I was considering starting a thread having seen this chart on another forum but stumbled on this whilst searching to decide where in this gigantic place I should post it lolz. 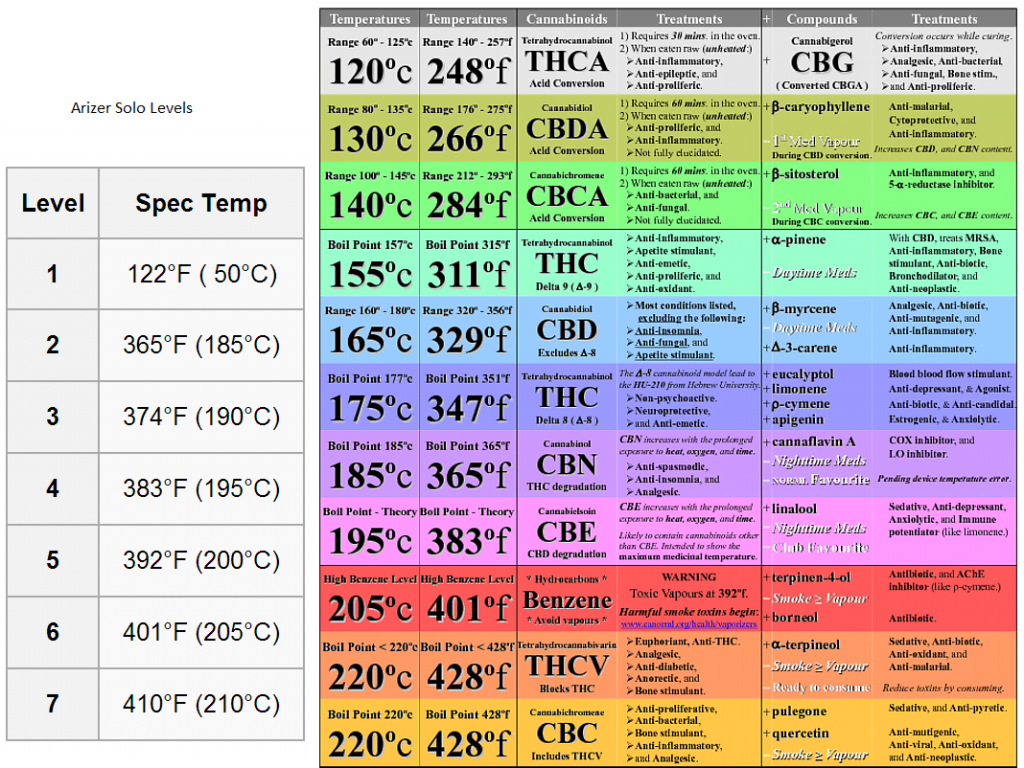 What I was going to ask was, obviously smoking takes temps to way beyond 420f, I believe a lighter flame is more like 3500f

so how do people get high when that chart says THCV is a THC blocker? Don't get it, but obviously THCV is the stuff that gets one of their tits, that's not to say lower temp stuff doesn't also.

I'm not experienced with smking or vaping or any type of ingestion in the past 20yrs cuz I quit at the age of 21 becuz off the huge anxiety being stoned (only ever hash, no weed was around) caused me.

But reading all these different reports of different effects from differnet strains, temps, ways of ingesting and so on is building my confidence to give this shit a go again and just see what happens.

There must be experiments documented somewhere of people vaping at all the different temp levels from one particular strain of weed, I'd love to read that if so...
S

I have heard of that once before.
U

I just bought a PAX 3, and wondered the same thing. It's a close one. The PAX 3 highest setting is 320, but on boost mode it hits 328 actual temp. That's the walls of the chamber though, not necessarily the air temp inside the herb cake.

It has a concentrate insert which is heated by contact with the walls, who knows how close the temp inside is.

I might get some linalool, which boils at 288. I'll try to determine if it's boiling off at the the predicted temp, or gassing off with the other cannabinoids and terps at a lower temp.
U

I bought 4ml of Linalool, and ran three tests. Rather than inhale a ton of linalool, I mostly pushed air down through the PAX, or pulled vapor into my mouth but not lungs. . I added linalool to green herb, and noticed increased vapor production in the 350-400 range. I vaped some herb and then added a drop of linalool to the dried cake. It had heavy vapor production as soon as I turned the unit on. I kept it at 360 for a while, and it seemed to cook off almost all the linalool. I got a little more vapor at 370, but almost no vapor above 380.

This suggests to me that oils in the herb heat up quickly, and boil off before my PAX reaches the true boiling point. Linalool boils at 388, but I was able to extract almost all of it with the PAX set at 370. So I'd expect THCV, with a boiling point of 428, to be extracted sufficiently at 410. Since I can crank it to 420f, I'm satisfied that will suffice.

I also put several drops into the concentrate chamber and started at the lowest temp and gradually increasing. Very heavy vapor right away, peaking at 360f. There wasn't much vapor at 370 so I shut it down. I looked in the oven and found all the linalool had boiled off. So again, a temp reading 18 degrees below the boiling point seems sufficient.

Because smoking destroys some of the molecules, vaporizing can provide more cannabinoids without extracting every last drop.

This 'data' is very subjective and device-specific, btw. I enjoy smoking, and knowing THCV, I might be more likely to smoke a sativa and vape an indica. But I think the PAX3 can vaporize THCV.

Btw, 4ml is a lifetime supply of linalool.

8 Cannabinoids that effect you the most!

S
The THCV unicorn in Indica or hybrid
2