The Basics Of Plant Lighting

Yes the distribution of the leds is hugely impt. im using a 360. it blasts photons but it is in a 18x12 case. im using it in my 4x2.5 space and its adequate but feeling the desire to add a 12"Â² heatsink on each end with 2cobs about 50w per cob @ 45% efficiency. im expecting the whole space to perform as well as the plant that is directly under the optic right now.

Many of the diy folks using this gear are easily over 1g/w with average veg and reasonable power usage.
Sugar punch in 1x used kit soil, basic LED.
S

VonDankenhoek said:
SF, which emitters are you using?
Click to expand...

Aside: Well done with your DIY system.

Graytail said:
My point is that everyone compares the source - the diodes/emitters vs the bulb. LEDs are a more efficient source. But in real life, plants are distributed over the entire space, while the LEDs (usually) aren't.

A 600 watt hps has an average of 700 PAR at 24 inches across a 4x4. One 350 watt LED panel will match that PAR within its focus, but that focus is a LOT smaller than 4x4. The LED manufacturers don't mention that. Four panels with 700 PAR and a 2x2 spread would be a fair comparison. One panel with higher PAR won't cover the full space, but will do great in the middle.

That should take of the spread issue.

Graytail... Yes, I agree. Employing a well considered decentralized deployment strategy is a particularly effective and efficient method of using LED grow lights. Investing in powerful small units and then spreading them out will provide superior coverage than using a single high-powered central panel.

Aside: Well done with your DIY system.

I know of a few latest tech, cob luminaire mfg's coming on line this year. I expect it will substantially raise the bar for the led makers marketing to cannabis growers.

By smaller integrated chips are you referring to far red stars? Im debating the merits of testing far red on my pontoons. I havent been convinced it is worth the effort? Do you have any science on cannabis, far red, 3-4k cobs?
Sugar punch in 1x used kit soil, basic LED.
S

Re far-red science: To be honest, I haven't done much research lately. But as is typically known, the primary reason to incorporate far-red (about 730nm) is to induce the Emerson Effect. A specific Canna-Comparison would be interesting (a grow with far-red and another without far-red). If you find research that explores this comparison, I would love to read it.

Re far-red benefit: If you are missing far-red, I would considering adding it. You may want to DIY far-red. Alternatively, there is series of powerful PAR30 spots that will soon be entering the market. These new spots are double the power of the spots found at HydroFarm. You could supplement your main light by surrounding it with 4 spots that emit far-red. Suggest assigning 5 to 10% of the total number of LED's in any given light to far-red. Or, assign 5 to 10% of the total power consumption to far-red.

Re 3000 to 4000k COB's: Are you seeking technical data or are you wondering what temperature you should use?

Re technical/component research: Most of the research that I do revolves around the practical possibilities, utility and application of finished systems. If you are seeking engineering details, suggest contacting Hosebomber. Perhaps an in-mail?

Agree, grow journals comparing the use of far reds would be enlightening. For now, im going with white cobs alone. Ive got huge heat sinks with plenty of space for evolving if the evidence is compelling.

Regarding temp im using 4k along with 4 cxb 3590 (cb)bin @ 3k. I have high hopes but wont be flowering anything until autumn, hot here. This lamp is designed for flower only.
Sugar punch in 1x used kit soil, basic LED.
S

Re the Emerson Effect: It is a well proven lighting strategy that enhances photosynthesis. Unless there is some new research to the contrary, I do not think it is discriminating; that is, all plants should derive a benefit from far-red.

the Bro who originated Pacific Light Concepts has a production panel hitting ~2.4Âµmols/J. He did extensive testing. There are no far reds on his panel. I think he is relying on the cree cobs to supply spectra values enabling the emerson effect. I was pretty much following his lead and relying on the cobs.

You can find the spectral graph within the data sheet here.

and, those COB's would be great for anthocyanin production... 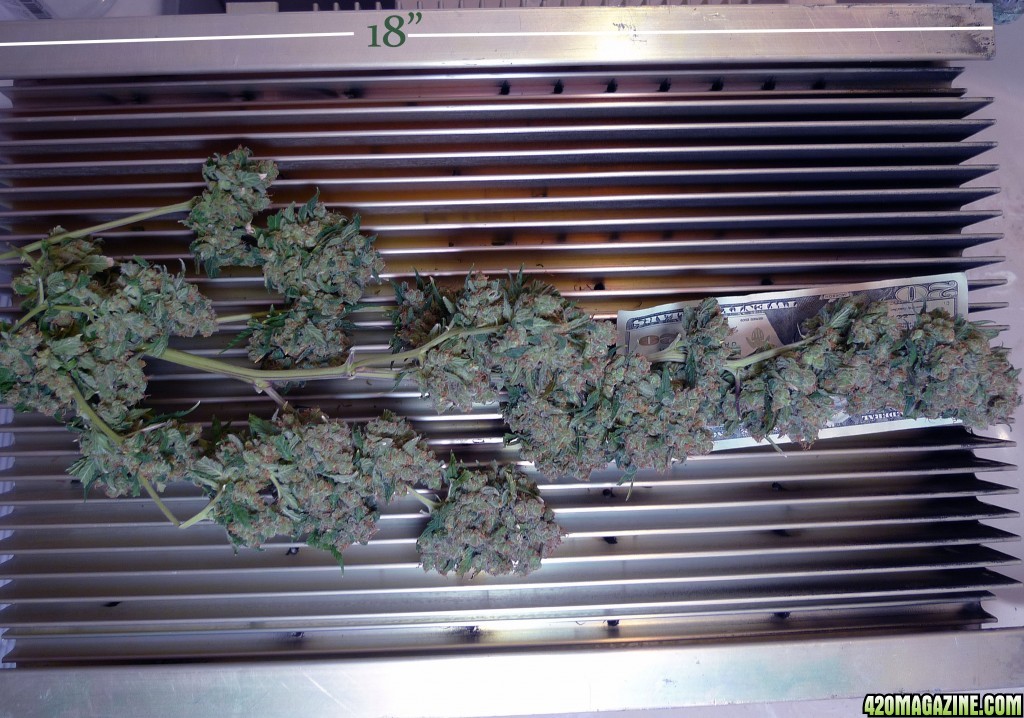 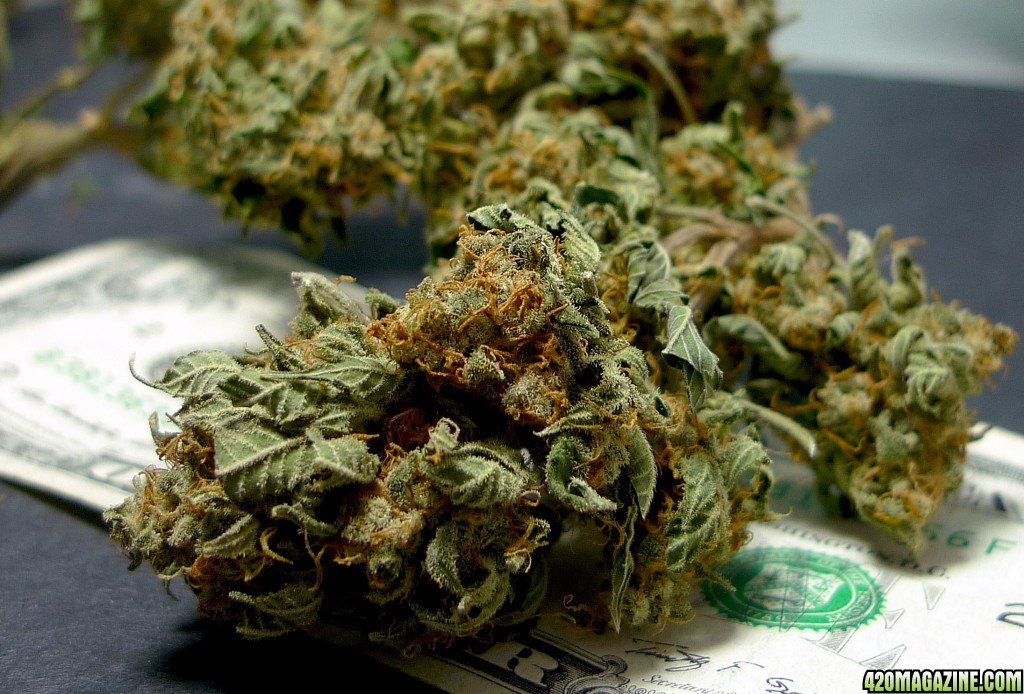 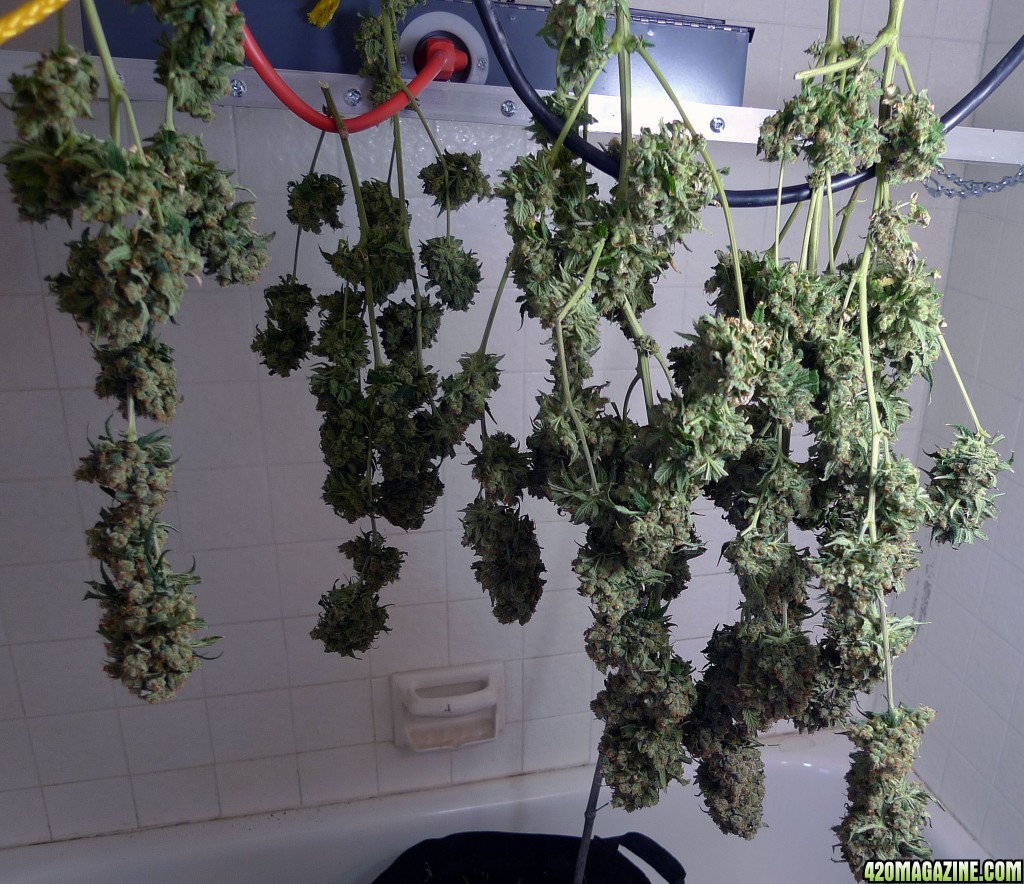 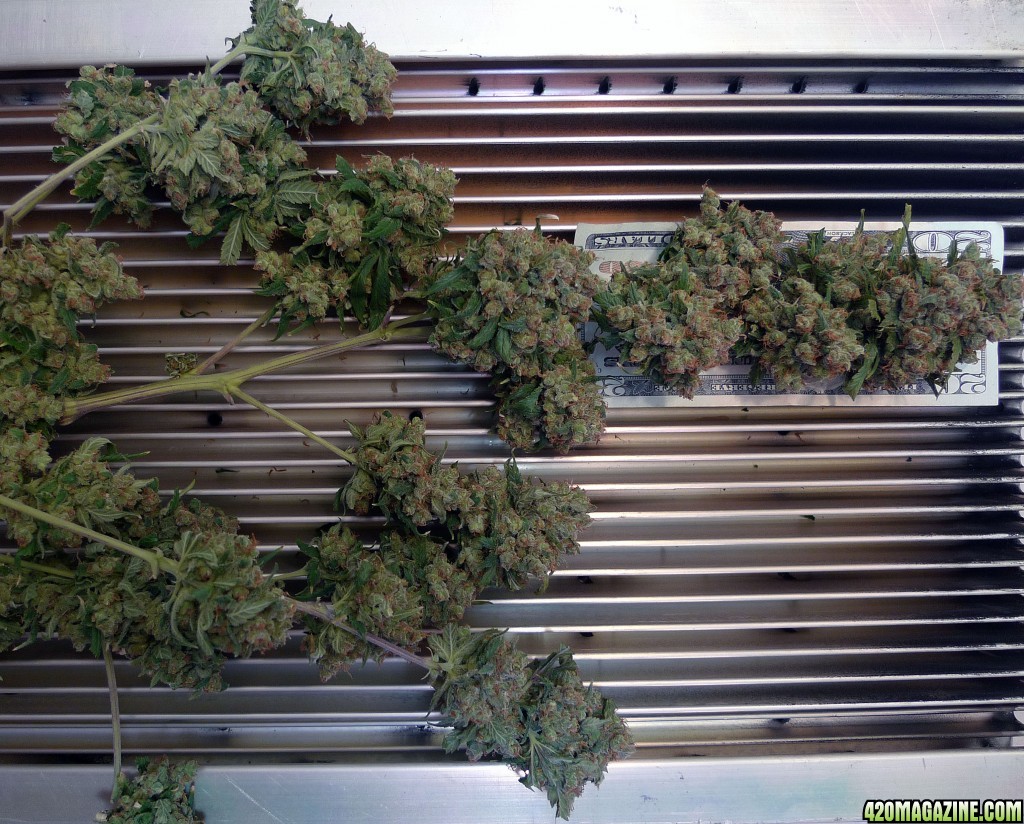 Hey Guys this is my first round of using the bridgelux vero 29 for a full flowering period. I was most def pleased. I will just improve from here on out.

The finned heat sink in the pic is part of the pontoon I'm working on. Each pontoon is !00w @~51% efficiency, passively cooled!
Sugar punch in 1x used kit soil, basic LED.

This is growing under 437watts of cfl's 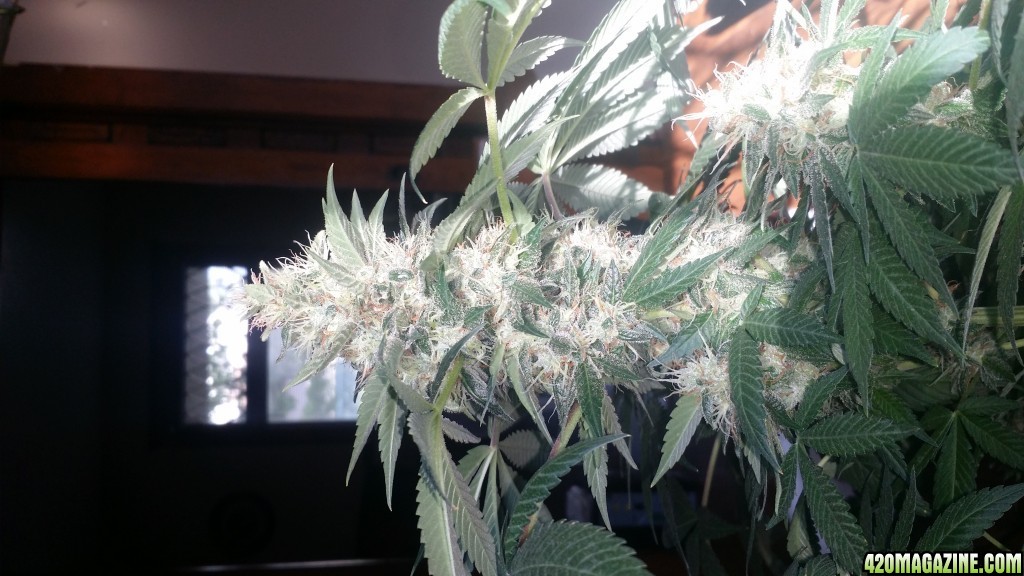 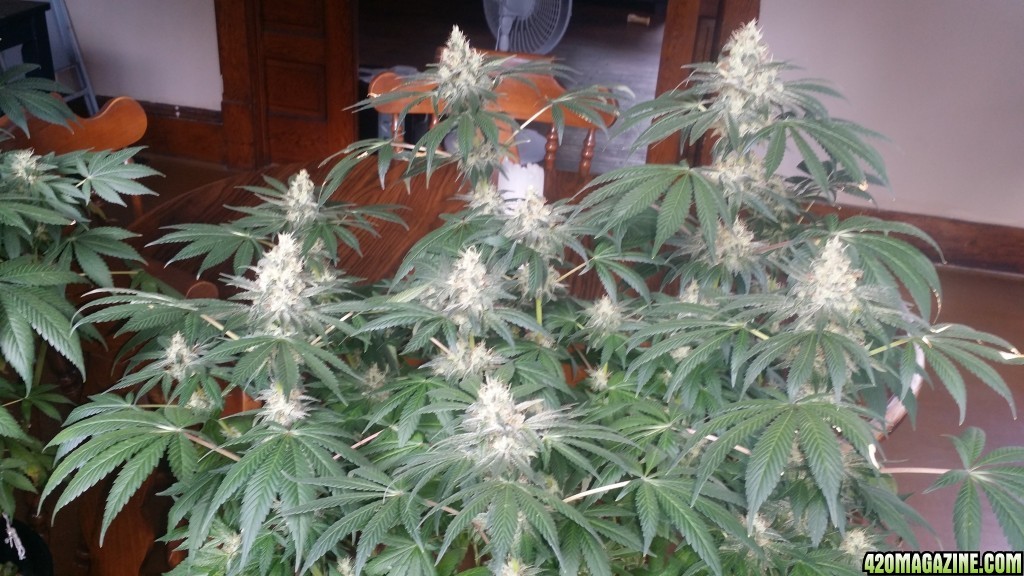 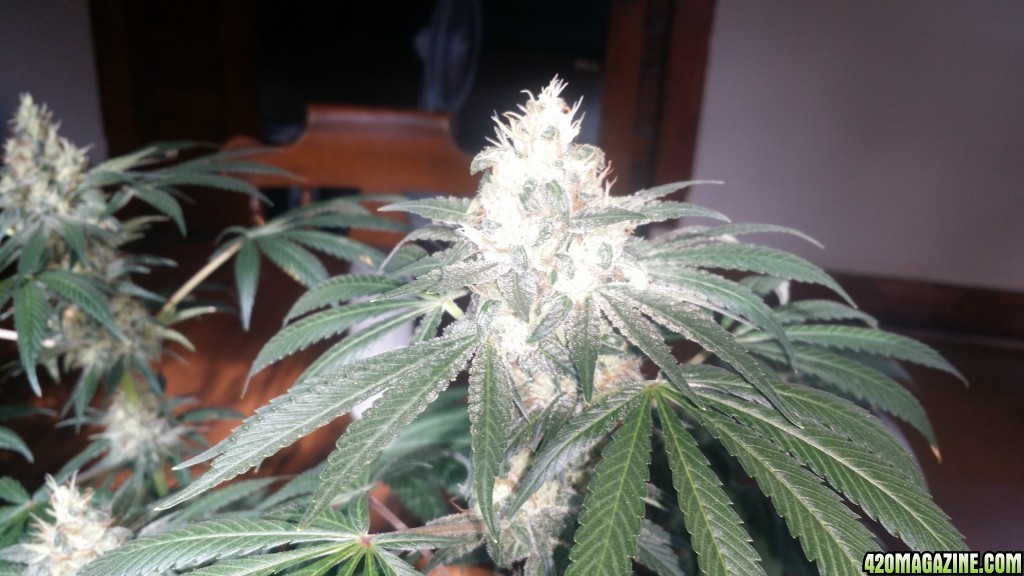 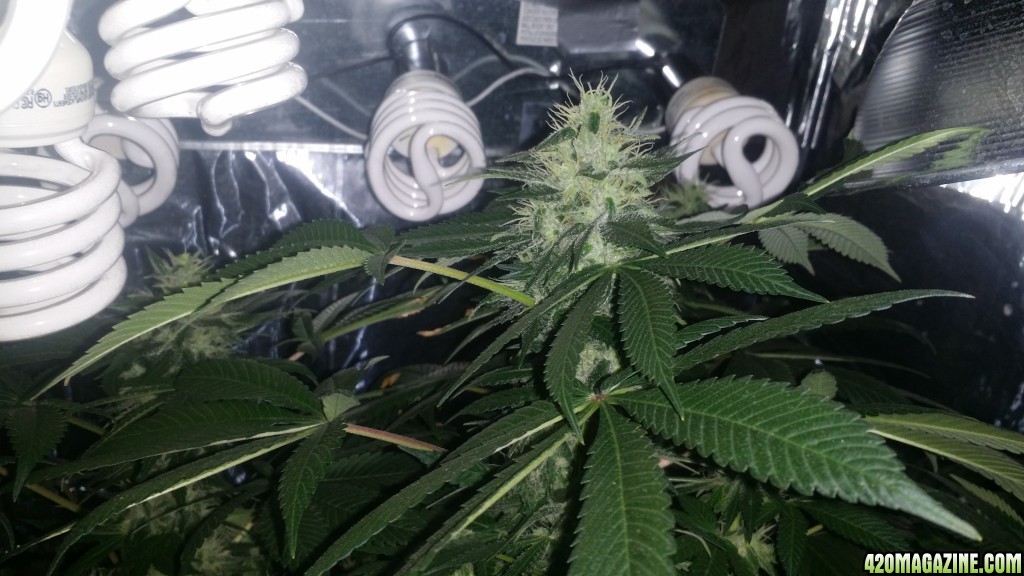 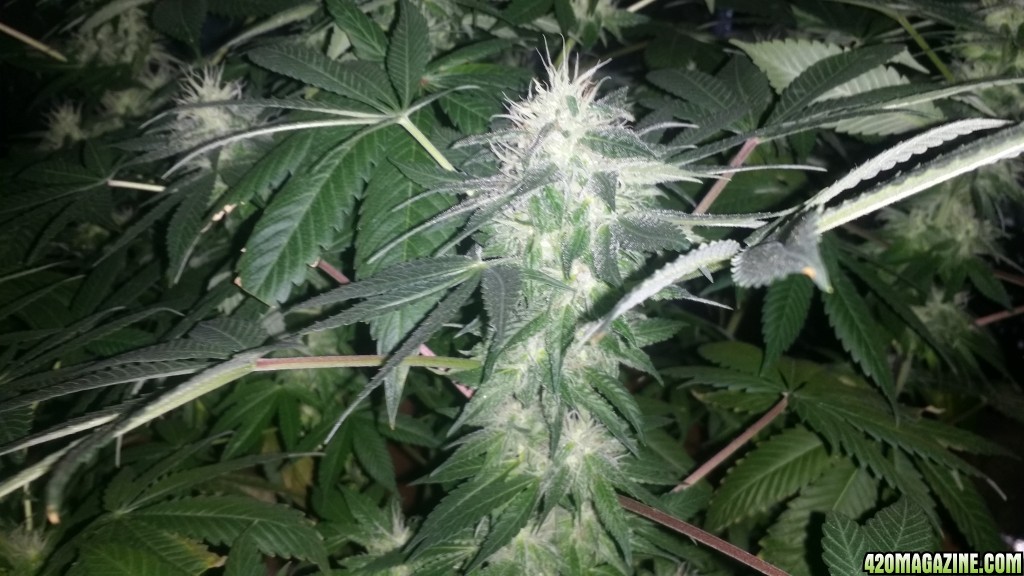 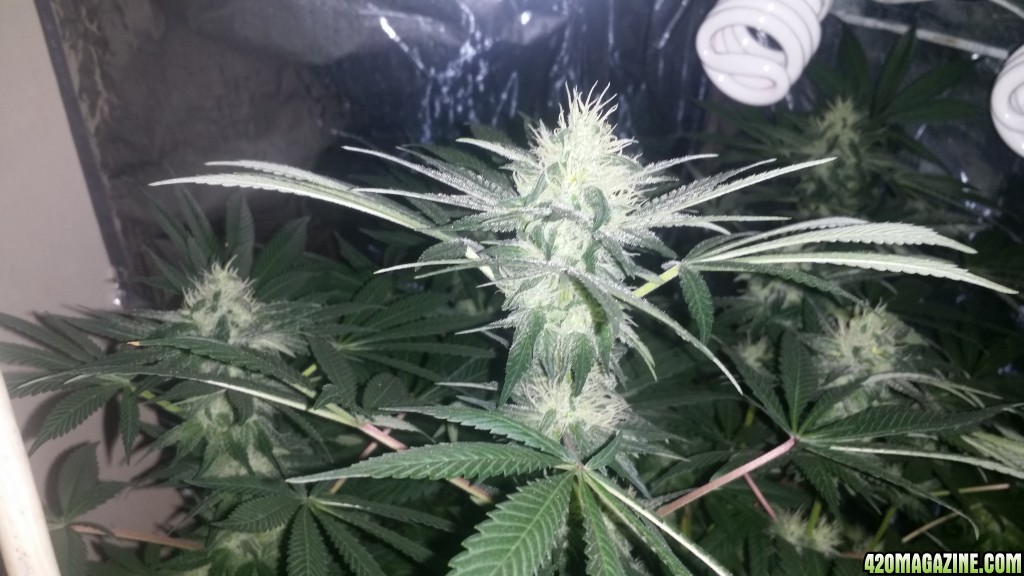 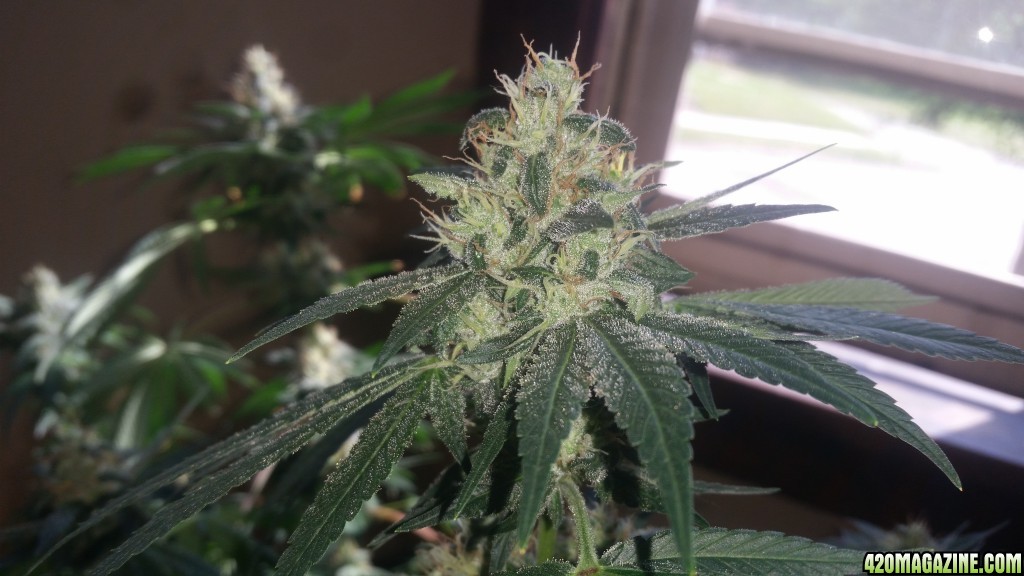 To give that performance figure some context consider that a brand new, best in class, HPS is about 40% efficient. Then consider that those bulbs emit their light nearly 360Â° so a huge hunk of it is diluted or wasted. The leds that are advertised and endorsed here on 420 dont, as far as i know, even have data sheets spelling out efficiency. Instead they have "special spectrums" and use unnamed gear. The best of these is likely less than 30% efficient and probably more like mid 20%.

The reasons this is important are many. When you buy a 1200 watt worlds most powerful led your getting an 800 watt heater and maybe a 400 watt light. Also when running blurple lights they hit blue and red hard and that seems to indicate good par but it is misleading because impt lower energy photons are ignored. Those other spectra promote complexity of terpenes and i believe better weed.

There are new lights coming out right now using bridgelux and cree chips that offer 40-50% par vs dissipated watts. You wont likely see any comparison grows here because you can't journal a grow featuring a light unless it came from a paid advertiser. In other words ignorance is good for biz.
Sugar punch in 1x used kit soil, basic LED.
H

There's a Spanish retailer that sells growlight fixtures with Cree cobs in them for rather cheap, not as cheap as DIY but it comes close.
200 true watts of CXA 3070 AB bin for 309 euro. (I can PM or if it isn't against the rules just directly link the site)
MarsHydro price, for Cree quality.

Cob holders mounted, power ready to go! Just waiting on the cobs. I paid for 5 cxb 3590, 3500k 72v (top bin, cd) this week. Im gonna polish up the heat sink until they arrive. I used Wago connectors. The little orange ones are a breeze but the wago winsta's had me outwitted for a while.

Pretty sure I'm safe and tight now. I'm using just 4 of the cobs, min order was 5. I'm going to power them at about 50 watts (.7mA) at that current they are better than 56% efficient! The final product will consist of 2 4 2 series where first pair dissipate 100 watts the next 4 dissipate about 340 watts and the last pair another 100 watts. I'm estimating ~245 par watts from this fixture when fully powered. 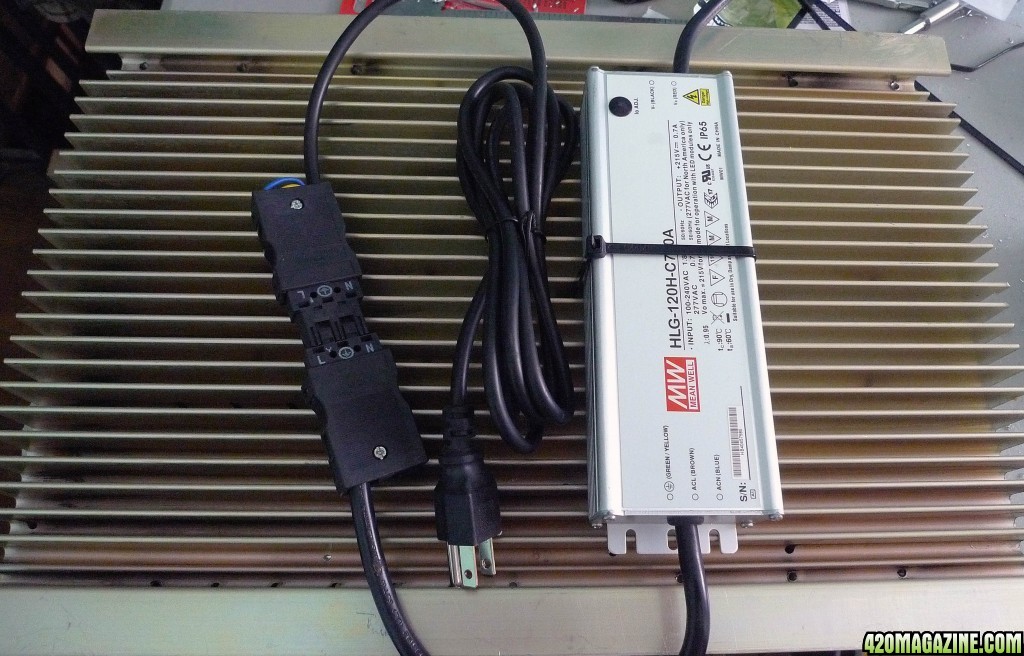 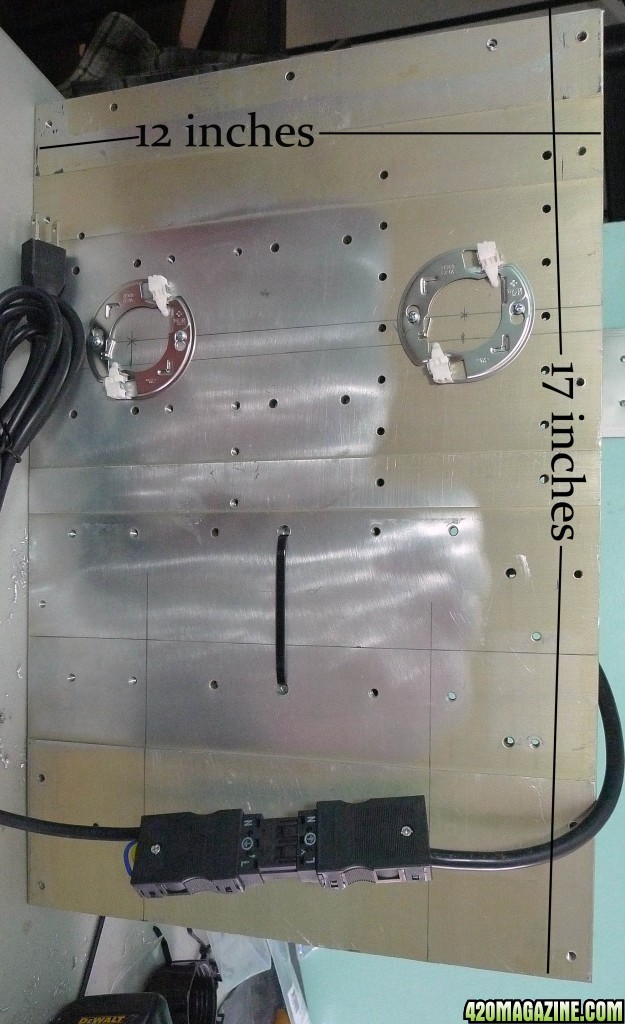 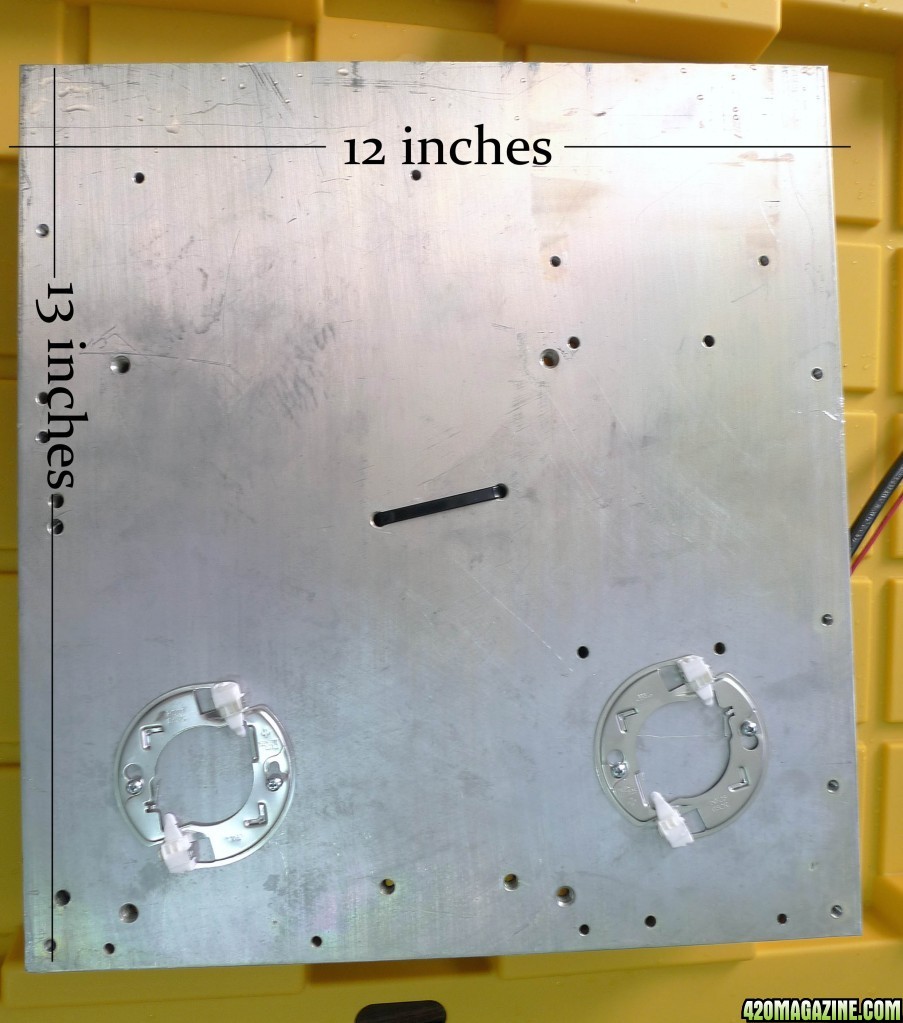 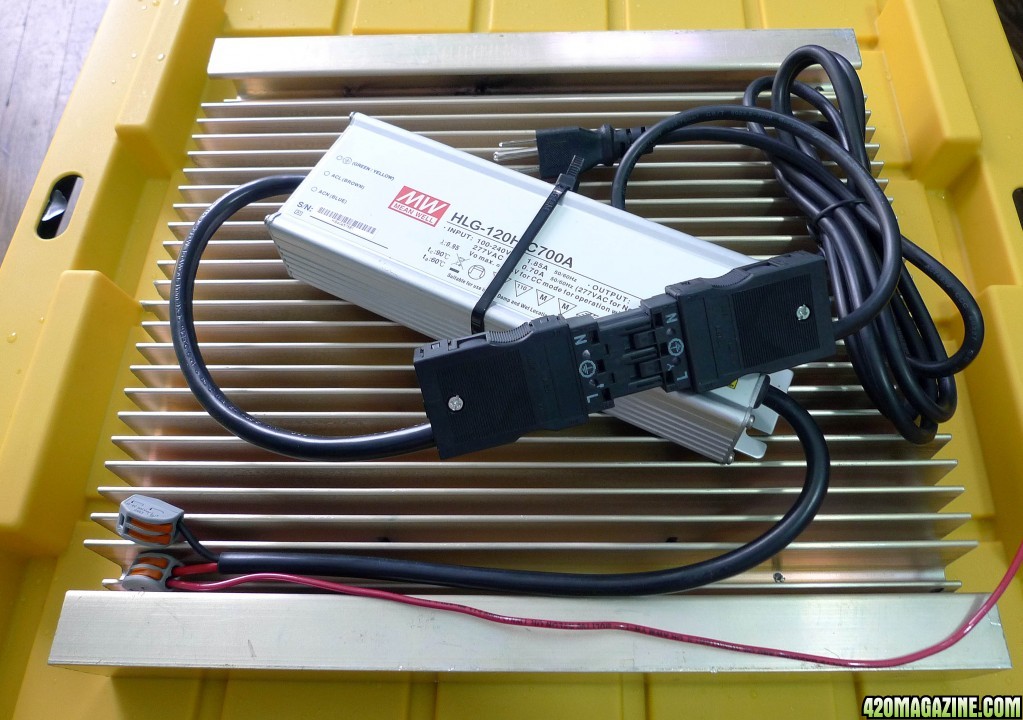 Thanks a ton, Von!

Ya pretty sure long leads are not a prob. I think when the length is longer, heavier gauge (eg14) is used to maintain current/voltage.They will be very short in this case. Also the drivers themselves are above 90% efficient so not really all that hot. You can power these up to about 140w but the best efficiency is obtained under lower power.

The veros are better bet when you wanna push the cobs harder. Vero 29 @ 2.1mA are about 80w @ 40% efficiency. As you know the majority of led vendors rely on magic spectrums rather than disclose the efficiency and brand of the diodes used.
Sugar punch in 1x used kit soil, basic LED.

I've been doing some research and the cost still gives me pause. Even with a DIY, it runs $1.50+ per watt.

I'd like to run four more lights in my room along the perimeter at 50-75 watts apiece and I'd like them to be white since I have so much blurple in there already. And I have those 10 watt Cree whites in the XML 350.

So some of the single CXB builds I've seen are pretty interesting - one COB with a beefy chunk of heatsink and a nice fan - pretty neat stuff.

bro the 1.50 per watt is a deal since the $$ are going towards light and not heat. The vero 29 are about 25$ each and 40% efficient at nominal current. That efficiency is likely double the rebranded stuff hawked on 420.