On July 22, an administrative court in Cologne ruled that three patients who are currently being prescribed medicinal marijuana could potentially grow their medicine themselves. A gram of legally imported medical marijuana from the Netherlands costs between 15 and 20 euros (between $20 and $25) in Germany. It isn’t covered by health insurance, and so for most patients, in spite of their special prescription, the price is exorbitant.

The judge ruled that a patient in dire need should fundamentally not be refused the opportunity to grow cannabis, as a last resort. One of the conditions of the ruling was that the patient's apartment had to be extra secure, to prevent access by third parties. Two out of five plaintiffs weren’t able to offer satisfactory proof of the stipulated security measures, so their suits were dismissed. GÃ¼nther Weiglein is one of the three victorious cannabis patients. Weiglein suffers from chronic pain after getting into a motorcycle accident that wasn’t his fault. He has been successfully treating his pain with cannabis for years. I met him to chat about the circumstances of his case.

Hey, GÃ¼nther, may I ask what you’re inhaling there?
GÃ¼nther Weiglein: Right now I’m vaporizing cannabis by Bedrocan. It’s the first strain the Netherlands started producing. But I'd prefer having some Jack Herer—an old strain developed by Sensi Seeds. It has a high THC content and works pretty well on my fits of pain. I would love to grow some Jack Herer at home if I were allowed to.

Have you had good experiences with this strain?
Not just that. Sensi Seeds offer many choices when it comes to cannabis. And they also co-developed the genetic basis for the existing medical strains.

Could you briefly explain what the difference between the strains is?
Right now in Germany they offer four strains of pot, all by the company Bedrocan: Bedrobinol, Bediol, Bedican, and of course Bedrocan. As a patient with chronic pain, Bedrocan was the only strain available to me in the beginning. When I am in pain, I vaporize a bud of Bedrocan. That feels like the pain is covered in cotton. It doesn’t go away, but it’s definitely bearable. Until recently, I smoked weed like most people; I decided to start vaporizing cannabis for health reasons. When you vaporize, the contents are just heated up but don't burn—like a vapor bath for a cold.

But the range of strains they offer in Germany is by no means sufficient. At the moment cannabis patients in the USA have a huge selection to choose from. They can choose between different strains depending on the kind of illness they have.

For example, cancer patients need CBD-rich strains; as a pain patient, I require THC-heavy buds. Some people need sativa strains, and indica works better for others. Then there are the numerous extracts that can’t be dismissed from medicinal use. For us in Germany, there’s a lot of progress to be made.

Recently, you became one of three patients in Germany who theoretically could grow cannabis themselves, right?
Yeah, there were five similar plaintiffs, and three of the cases were accepted by the court, including mine. I have had a special approval for the past five years from the BfArM [Federal Institute for Drugs and Medical Devices], which allows me to buy Bedrocan cannabis in German pharmacies. I can get the stuff in a pharmacy, but at the price of 15 euros per gram, I can’t get it in sufficient quantities. That’s why I submitted a request to grow my own cannabis four years ago, but the BfArM refused. So I brought a case against them to court and just recently obtained said verdict.

Can you immediately start growing weed?
If only. According to the judge, I can start growing because my apartment has the required security measures. But the stipulations that the administrative authorities in Bonn made in similar cases were impossible to fulfill. In principle, they insist that your apartment be as secure as Fort Knox, and you have to finance these renovations yourself.

The room where I want to grow weed is secure enough for the judge, but there is a lot of bureaucracy involved. It’s still the BfArM that gives the permission in the end—the judge can’t directly allow it. So neither I nor the other two people who won in court have been able to get the necessary piece of paper that actually authorizes us to grow yet.

Is it only a matter of time now?
The verdict isn’t legally binding yet. My lawyer, Matthias Schillo, and I are convinced that the BfArM will appeal the case. They are very good at delaying and stalling, which you can see from how long it took for the case to reach the court. So we’ll still have to wait for the verdict in the appeal. But even if they uphold the verdict, they can still come to me with authorization papers that aren’t referred to in the verdict. For example, the administrators working under the Ministry of Health could come and complain about the wooden door that leads to the grow-room and demand a steel door. Or a better lock, or something else.

So you can’t just buy one of those tents from the grow shop and set it up in your bedroom, even if you’re really allowed to. What does the BfArM require exactly for you to be able to grow your own medicine?
First of all, they need to make sure a patient is actually in need of it. In order to grow, I also have to protect the plants from access by unauthorized individuals. For that I have to have them in a secure room. In my application I stipulated using an old bathroom, which is currently used for storage.

I don’t have to put bars on my windows, because I live on the first floor, but if I lived on the ground floor I would have to. I also need a secure cabinet to lock my supply in. Extremely exaggerated measures like double walls, special windows, and having a safe installed, which the administrators demanded of earlier applicants, were off the table in this verdict.

So in spite of the verdict, you’re restricted to the expensive cannabis from the pharmacy. How do you deal with that?
I can’t afford the amount I’m prescribed, so I buy what my wallet allows at the moment. I need more weed in the colder months than in summer, especially during the wet autumn. Growing for myself is the only way for me to get out of this dilemma of always having too little medicine or the wrong type. Conventional medicine also works for me, I don’t want to talk shit about that; but the side effects are nasty in my case, in comparison with cannabis.

The other patients maintain a low profile, but you continue to give interviews. Why?
Other patients can’t, or don’t want to, reveal themselves, for understandable reasons. I realized that cannabis patients still have a bit of a stoner stigma. Nevertheless, I still think cannabis should only be accessible to people who need it for medical reasons. Cannabis needs to regain its value in society, the value it once had. The plant can’t speak for itself; that’s why I try to offer it a voice and to possibly inspire others to do the same. 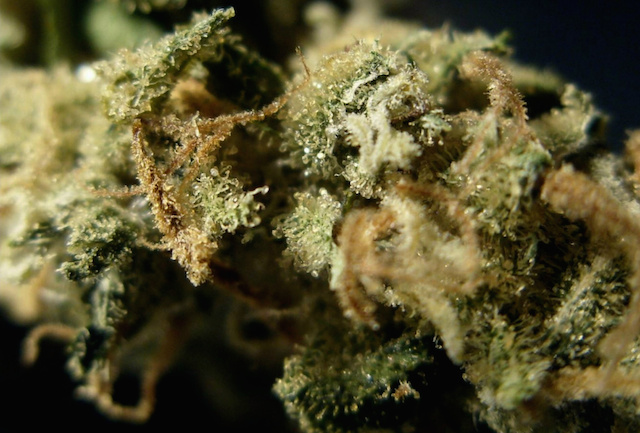