The Fight For Medical Marijuana For Epileptic Kids

January 22nd 2015 was a brisk, cold day. All the trees in Richmond, Virginia were bare from a harsh winter. As the chill blew up the hill in the city's historic Shockoe Slip district, several families began to emerge from a hotel in the shadow of the State Capitol.

Lisa Smith was there with her 14-year-old daughter, Haley. Beth and Patrick Collins were there too, accompanied by their 15-year-old daughter Jennifer. Later, they would be joined by Teresa Elder, her daughter Ashley, and Teresa's 22-year-old son, Tommy.

Haley, Jennifer and Tommy are desperately ill with extreme forms of epilepsy. They have illnesses so insidious they have stymied a virtual army of doctors and specialists. But these families believe that oils made from a cannabis plant might help their children where they say all other anti-epilepsy drugs have failed.

On that day, all of these families were in Richmond to attempt a task they had been told would be impossible: to try and convince the Virginia General Assembly to change a decades old law to allow the families access to those oils. It was the first step of a remarkable journey.

Lisa and Bobby Smith, their daughter Haley and twin sons, Parker and Peyton, live in Virginia's Northern Neck, an idyllic spot on the Chesapeake Bay. As the sun rises over their house every morning, it paints with every moment a new hue in the sky. It's easy to understand why this family -- why any family -- would want to live here. And when Lisa and Bobby welcomed Haley in August of 2000, it seemed to make their house a home.

At first, Lisa said, Haley was, "normal, happy, developmentally right on track." But, she told NBC's Harry Smith, "she was also my first child, so I could have had blinders on and didn't see some of the signs that were there."

Lisa says the first seizures came when Haley was five months old. As Haley got older, the mystery only deepened for the Smith family.

"She wasn't diagnosed till she was seven," Bobby Smith explained to Harry. "That was a true roller coaster. It was awful the first seven years 'cause we didn't know what was wrong with her."

Haley was eventually diagnosed with Dravet Syndrome, an extreme form of epilepsy, which is frequently fatal. The older Haley got, the more frequent and violent her seizures became. What the Smiths considered "normal" is unfathomable. By the time Haley was 12, Lisa Smith said her daughter was having 300 seizures a year.

Two years later, her parents say Haley was averaging 1,000 seizures a year, and anti-epilepsy drugs seemed to be having little effect.

Beth and Patrick Collins live in Fairfax, Virginia, just outside of Washington DC, with their daughters, Alexandria, 17, and Jennifer, 15. Jennifer's seizures first started when she was about eight years old and to her parents seemed innocent enough: a fluttering of her eyes. Beth says she first noticed it around the dinner table, because as she said, "that's when you're face to face with your kid."

But Beth and Patrick say that as Jennifer got older and began going through puberty, her condition worsened. Jennifer began to have grand mal seizures. Her father Patrick says the first time he witnessed one of these seizures, "I thought she was dying...she started turning blue, her eyes rolled back into her head, and her body contorted."

"It's just absolutely terrifying," he added.

Eventually, Jennifer was diagnosed with Jeavons Syndrome and was prescribed strong anti-epilepsy drugs. Patrick and Beth worried about the side effects of the medications Jennifer was taking. Beth says her daughter suffered "...every side effect to every medication that was on every label." Her parents say one drug caused a rash so severe, Jennifer had to be rushed to the emergency room.

Harry Smith asked the Collins's if they felt like they were losing their daughter.

"We felt like we were losing our entire family," answered Patrick.

Less than a mile away from the Collins' house, in a cul-de-sac neighborhood, lives Teresa Elder. Teresa and her daughter, Ashley, round out the core group of families who were in Richmond that cold January morning. Teresa can relate to the other families, because her son Tommy has had intractable epilepsy since he was an infant. Tommy wasn't supposed to live past his third birthday. He's been on life support thirty-nine times in his life.

Tommy has never officially been diagnosed, but Teresa says he presents as a Dravet patient -- that's the same condition Haley Smith has. Teresa says in the days before the Internet and online support groups, she felt very alone.

"No one else that I knew had a kid with seizures this bad and no one knew how to treat it." Teresa told Harry Smith.

All three families were in Richmond on that cold January morning to lobby for a new law. It wouldn't legalize marijuana in the state, but it would allow them and others across the state, , to possess certain oils made from cannabis plants with a doctor's certification. One of the oils is made from a compound known as CBD, canabidiol. CBD is a non-psychoactive. The other oil the Virginia families are requesting permission to possess is known as THCa.

All of the families became aware of the treatment potential of these oils when a Colorado mother, Paige Figi, began to get media attention. Her daughter, Charlotte, also has Dravet syndrome. Paige says Charlotte had tried and failed every anti-epilepsy drug by the time she was two years old. For much of this time Paige's husband, Matt, was deployed in Afghanistan. Paige says she felt very alone.

"I had reached rock bottom with her," Paige told Harry Smith. She says the hospital finally sent her home, telling her, "We don't have anything left to do. We're sorry."

Paige says she brought Charlotte home, put her on a "do not resuscitate" order, and in effect waited for her daughter to die. In fact, she says, "I was praying for her to die, because it was so bad to watch the suffering ..." But Paige did not give up. After finding research online and hearing stories about marijuana helping children with seizures, she thought she would try one last thing.

A friend put Paige in contact with Joel Stanley, a medicinal marijuana grower. Stanley and his five brothers grow medicinal marijuana in Colorado, where it is legal. Together, Paige and Joel made an oil from a cannabis plant that Stanley says is low in THC - the compound that gets someone high -- and high in CBD, the compound some believe helps treat the seizures.

Charlotte had been having 300 seizures a week. Paige says they stopped when she gave her daughter the CBD oil. To this day, all Charlotte (or "Charlie," as her family calls her) takes is two doses a day of the oil.

The Stanley brothers have now built a lab and are making the CBD oil on a large scale in Colorado. They call the CBD oil "Charlotte's Web," named for its first user. The Stanley brothers maintain their plant is not actually cannabis, but rather hemp. A botanist would tell you the plants are the same, but the federal government said in the Federal Farm Bill of 2014 that a plant with less than .3% THC is hemp. The Stanleys insist that what they are doing is legal in Colorado, and even on the federal level, because they say they are making a hemp supplement. Several federal agencies, including the DEA and the FDA, maintain that marijuana and hemp for consumption are still illegal on the federal level.

Because of stories like Charlotte's, people with profoundly ill children, mostly with these extreme cases of epilepsy, have flocked to Colorado for treatments. In many ways, Colorado has become something of a "new Lourdes" for people looking for a "miracle." The Stanley brothers helped to form Realm of Caring, an organization that assists people who move to Colorado and provides support services and resources for those using Cannabinoid products.

Both Beth and Patrick say they were ecstatic to see their daughter "come back." But they say the stress of the separation on their family was too much. Beth and Jennifer moved back to Virginia and took up the cause of lobbying the legislature in their home state to legalize the THCa and CBD oils.

As striking as these stories are, they remain anecdotal stories. The safety and effectiveness of these oils has not been established by clinical research in this country, according to doctors. Some researchers say that's largely because marijuana in all forms remains illegal at the federal level, making it difficult for scientists to obtain the plant for clinical trials.

One scientist who is intrigued by the potential of marijuana treatments is Dr. Amy Brooks-Kayal, a neurologist specializing in epilepsy in Denver, who is also the president of the American Epilepsy Society. She urges caution, saying there just isn't enough known about these oils to say they are safe or how they may ultimately affect patients.

"You have to do the studies," she says. "In medicine, believing that we know the truth without doing the study is a very unsafe thing to do. The reports from a single family or a single child don't mean that anybody else is going to respond that way."

Dr. Brooks-Kayal, and the organization she heads, do support changing federal laws to make research on marijuana easier. Other experts Harry Smith spoke to believe there is potential to alleviate other neurodegenerative conditions with cannabis-based treatments .

For all of the Virginia families on that day in Richmond earlier this year -- Lisa and Bobby Smith and their daughter Haley; Teresa Elder and her son Tommy; and Beth, Patrick, and Jennifer Collins - the cannabis oils represented a sense of hope. They all hoped to be able to get access to the oils in Virginia. And they all hoped they could alleviate what plagues their children. 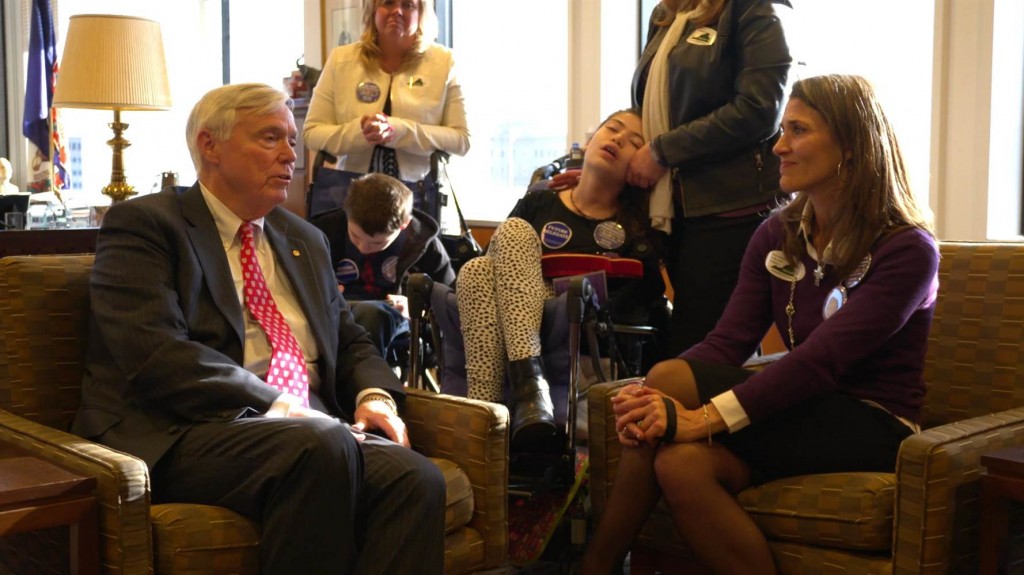 I just watched this special and it brought tears to my eyes to see these children and their exhausted & bewildered parents trying to get mmj charlottes web for children to save their lives. Everyone should watch this program. To me it's criminal for there to be a plant/substance to help so many children and people with debilitating disease unable to get this medicine - make no mistake about it, it is medicine. I suffer from chronic pain and PTSD, social anxiety disorder and depression. Mj gives me instant relief from all this. I've become a criminal by purchasing the med I need but if I had a child who suffers as these children do I would move to a more progressive state like Colorado in order to save my child from the horrors of multiple painful seizures a day. To think in this 21st century mj is still a schedule one substance while CRACK COCAINE is a schedule II is simple insane. The evidence is in just look at the growing number of folks finding relief from mmj. Why do we need further studies? It bypassed the long drawn out FDA testing and clinical trials straight to human trials (thank god) and it works. They say well we don't know the long term effects. How many stoners have suffered any long term effects? Willie Nelson. Snoop dog? At age 66 after using most of my life I have no ill effects. Can anyone say using mj has been harmful to them? I think we need a million person march on Washington to get our point across anyone with me? Love you mj and 420 forum. Oh, if a parent withholds a medicine from a sick child due to a religious thing they go to jail - why can the government do this with impunity?