Hey whats up all? Yep its the Great White Rhino Shootout in a all-out Battle of the Banks! Seedbanks that is! What we have here is 2 separate White Rhino seeds. One from Greenhouse Seeds and the other from Nirvana Seedbank. Both femanized. Both to be grown in soil, a 3-part Fox Farm regular mixed with 1-part FFOF, under one 120w LED that has succesfully grown some good weed in the past. The seeds from Attitude arrived some 18 days after order. The freebie was Kannabia Kannabis? or somethin'...Anyway I noticed right off the bat the differences. The Nirvana seed was huge and speckeled while the Greenhouse seed was tiny and smooth. I tried to capture video of that. I successfully germinated in the usual fashion, napkin and baggie. After careful planting, the 2 sprouted Dec. 21, the Nirvana seed just hours ahead of the Greenhouse seed. They are young and so far very healthy but already have shown their first 2 big leaves. I guess I am doing this just to see any differences between the 2 from how they grow to how they smell,look,taste,and,of the course,the high. I researched to find a potent high that was a big yielder and this one came up alot. So here we go, so far so good. Should be interesting to see how close or different they are even though presumably they come from the same strain. Certainly the seeds were nothing alike. Here is the youtube link to the video journal:


Thanks for watching. More updates this weekend.

Re: The great white rhino shootout!!

Thanks. Quick update then more later...they are growing short and wide. I have awesome video coming soon. These are gonna be monsters....I can tell. They are loving their enviroment. Totally undisturbed. I will try to do updates every two weeks;sooner if it warrants. So Jan. 4 will be 2 week but I may go ahead and do the video a day or 2 sooner. Thanks for looking.
M

Well here they are at 12 days (just 2 days shy of 2 weeks old). Some mysterious white powdery substance has been noticed on top of the soil mostly on the sides and corners. Never seen that before but the perlite in the middle of it is turning green on one side. Anyone? Other wise the plants look healthy and green. One other note; I have only watered once since they popped since the soil never seems to dry out. Don't know if thats a clue as to what the white stuff is but there you go. Here is the video:

Thanks for looking. Another update in a 2 weeks.
C


mortimer said:
Well here they are at 12 days (just 2 days shy of 2 weeks old). Some mysterious white powdery substance has been noticed on top of the soil mostly on the sides and corners. Never seen that before but the perlite in the middle of it is turning green on one side. Anyone? Other wise the plants look healthy and green. One other note; I have only watered once since they popped since the soil never seems to dry out. Don't know if thats a clue as to what the white stuff is but there you go. Here is the video:

Thanks for looking. Another update in a 2 weeks.
Click to expand...

I had a change in my grow room due to cold temps. Before I had the 2 of them just growing in the closet with RH at around 48% but because it is the dead of winter, we are pretty much keeping the ambient room temp at around 72-73 degrees. I thought it would be warmer in the closet but it ain't. I all I could muster was around 72 degrees inside the closet. So I put the 2 plants in a very small grow tent. They are quite snug as you can see but when it is zipped up the temps climb to about 77 but now I have RH at over 80%. Not real good,I guess. Ideal temps I believe are around 75-85 degrees and RH at 50-70%. I have no fan other than the 3 built in fans in the LED lite in the grow tent. I'll try to attach a fan inside the tent for circulation to bring down the RH. Other than that the plants seem very happy and healthy. I noticed now, very obviously, the Nirvana WR is quite tall compared to the Greenhouse which is rather short and wide. Any comments would be great. Here is some pics: 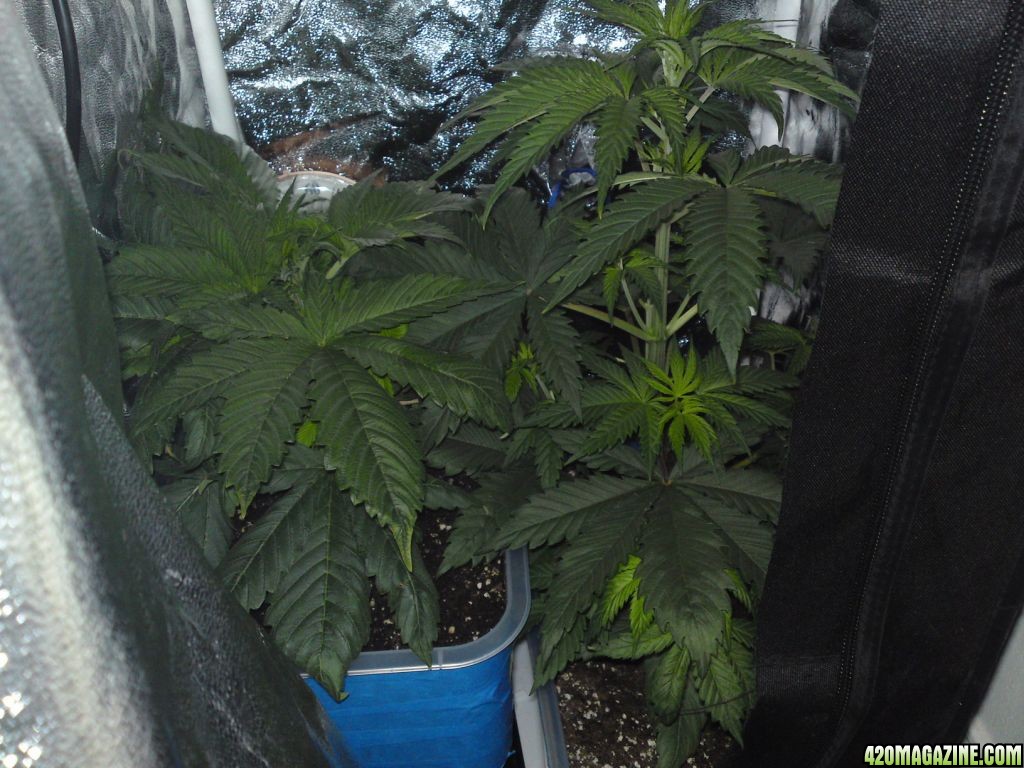 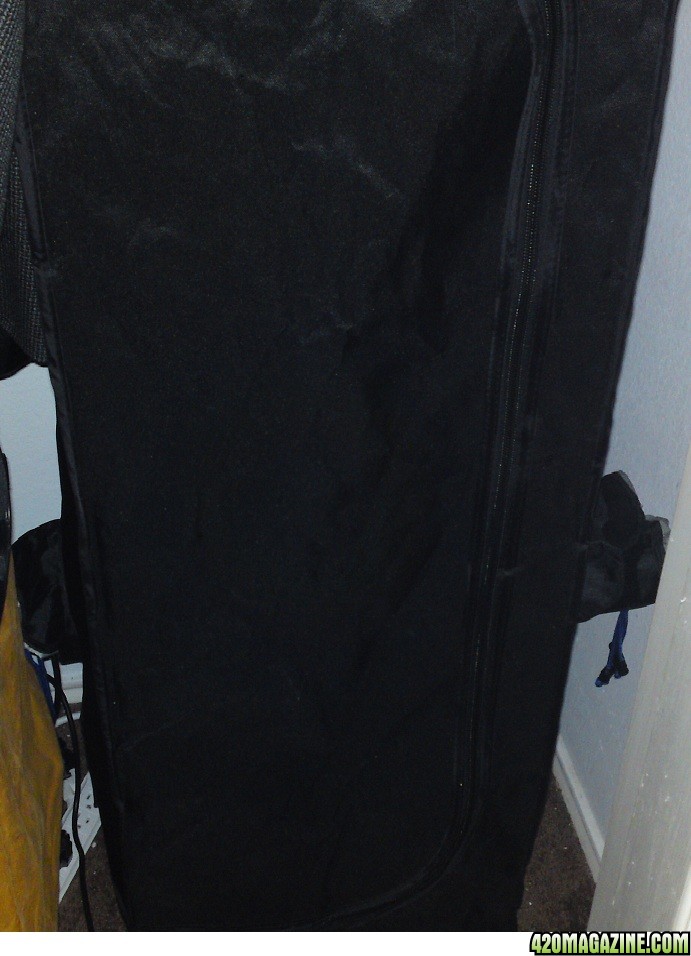 Both of them look so good. I think what you were doing up till now was perfect.
C

Are you only using the 120W LED? No supplemental lighting at all? That's amazing.
M

Yes true it is a 120w LED from GLH. Of course the reflective walls of the tent help distrbute lite but then again the walls of the closet were white, so......anyway thanks for the comment. I may move them back into the closet anyway. My temps were not totally out of whack i guess. Neither was the RH. I hope the crowded tent isn't a hazard for them...
M

Hers's the video with the update. Nirvana continues to grow long and lankey while the Greenhouse continues to get wider and bushier. Interesting! Both seem very happy and healthy. Starting the flower cycle now so its flip mode 12/12. Thanks for looking.

in my honest opinion, comparing such a small sample size is totally unreliable.

Even if you ordered 10 seeds from 1 company, you might end up with different phenotypes. Different seeds from the same place might show different characteristics from their parents.

that said ... I hope you get some killer herb from both.
M

I understand what your saying but this is not a scientific study. It is interesting though that 2 different seeds of presumably the same strain from 2 different seedbanks are so vastly different. And yes I plan to get killer herb from both...
M

Confirming females for both of my femanized White Rhinos..happy day. They both seem to be doing well and are healthy and very green. They are getting big inside the closet and its becoming a little snug. My ph runoff is around 6.3 and I am maintaining temps around 77 with humidity at 60%. I have seen the tiny hairs for myself some time ago and now we have the very beginning of numerous little bud sites. See for yourself in this little video.

Damn those are both looking real nice really cramped in that tent haha.
M

Actually I took them out of the tent awhile back. They were only in there over a weekend a couple of weeks ago because I was having a hard time keeping temps/humidity up so I thought that would help. We were having really cold temps outside so I didnt want the plants to suffer inside. When it began to warm up outside they went back to being in the closet. However they are snug in the closet. The Nirvana WR is getting so tall I had to LST it a little to prevent it from hitting the lite. What I noticed this morning is the bud sites tend to be a much lighter green than the fan leaves. Wonder if this is a concern? I have been feeding them with highly diluted FF Tiger Bloom. Maybe I should just flush next watering with ph water instead of feeding. Anyway thanks for the reply. Next weekend is gonna be C-R-A-Z-Y here with tons of people coming in to our city for the Super Bowl!

Ladies are looking nice and healthy.
Cogito ergo sum - Descartes
Major in philosophy, because there's no way to make a career out of that. 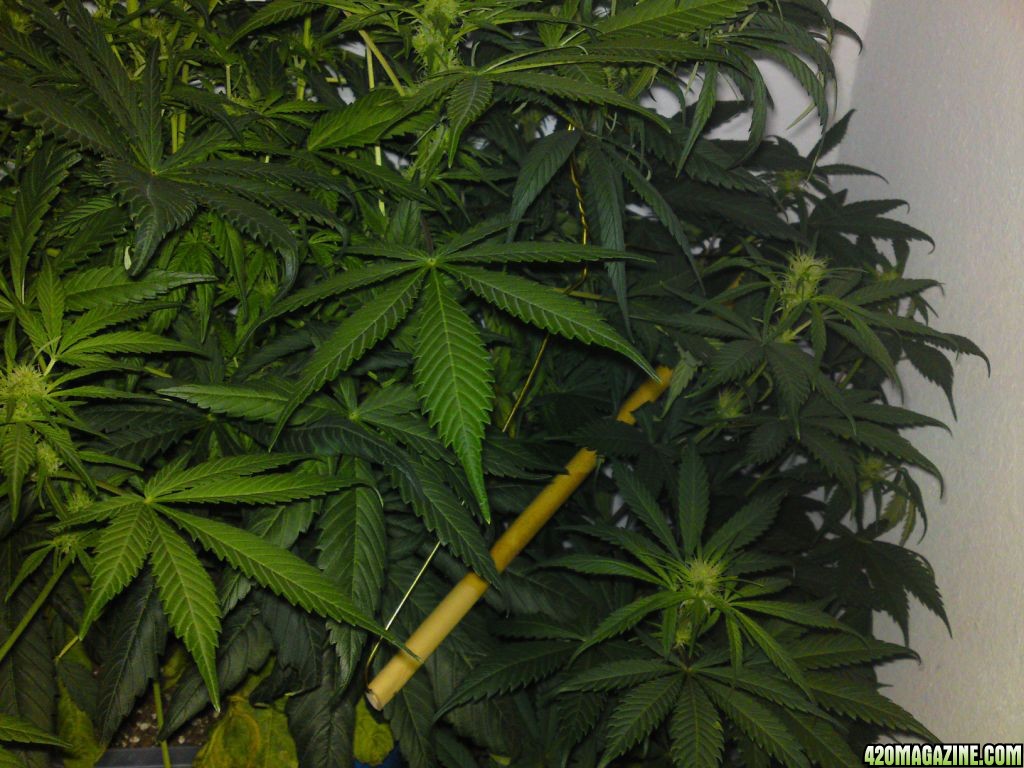 The shape of the Nirvana plant in the last picture is the result of LST done with a coat hanger seen in the first photo. The top was getting too tall. Thanks for looking!

Very nice indeed.
Cogito ergo sum - Descartes
Major in philosophy, because there's no way to make a career out of that.