The Legion of Doob: Perpetual Chaos

This will be a journal of my current system. It’s evolved quite a bit since I started up again, after a 20 year break, about 3 years ago. I’ve learned a ton of stuff and met some great people from this forum. Hope you find this interesting. Feel free to comment, follow, hate, or whatever, I’m pretty easy. I’ll try to keep it updated.

I constantly experiment and change things looking for incremental upgrades. I get bored easily so constant change is a must to keep me going.

Like I said I experiment so this varies, but I’m also into quick and easy so I always have lots of hempys, I’ve also used Doc Bud’s High Brix soil, and will sometimes be playing with some DWC buckets and someday some dutch buckets.

For the hempies I really liked and had a good system with MegaCrop & CalMag until they changed the MegaCrop formula, now I’m trying to dial it in again with the new formula. But I have about 20 lbs of the old formula so I mostly use that.

I also use Doc Bud’s soil, and will be using Rx Green Technologies nute system for the DWC buckets and a few hempies here and there.

Although all cannabis plants have the same basic needs every different strain, chemovar, phenotype, or whatever has different optimization requirements and recognizing and adjusting for their differences is my goal. I often grow several generations of clones and keep trying to find perfect system for each one, until boredom overtakes and I let the clone line die out.

I believe the plant knows how to grow itself a lot better than I do, so I try to pay attention to them individually and adjust to their specific needs. I experiment a lot so sometimes things go bad but mostly I get nice buds in the end.

I don’t really weigh stuff out much, but since I’m journaling and growing other people’s cuts I’ll try to remember to.

Although they are specific definitions to the plant’s heritage, I feel the words “Sativa”, “Hybrid”, and “Indica” have become more descriptions of the high than of the actual plant. I’ve grown “indicas” that have uplifting motivating highs and “sativas” that put you to sleep. So don’t expect any strict traditional classifications of anything.

I’ll grow just about anything. I smoke a lot and make a lot of topicals and variation keeps the boredom and strain tolerance away. I tend to like Sativa highs in the morning, Hybrid highs in the afternoon, and Indica highs in the evenings.

I’ve got lots of other seeds that will eventually make it into the rotation and like many addicts I’m always getting more.

Okay get to the fricken pictures already:

Here’s what I presently have growing in the 28”x28” veg tent. The three big ones are Berry Bomb from @Agemon the rest are clones I got from @InTheShed six Candida, two Peyote Critical, and two Sour G. 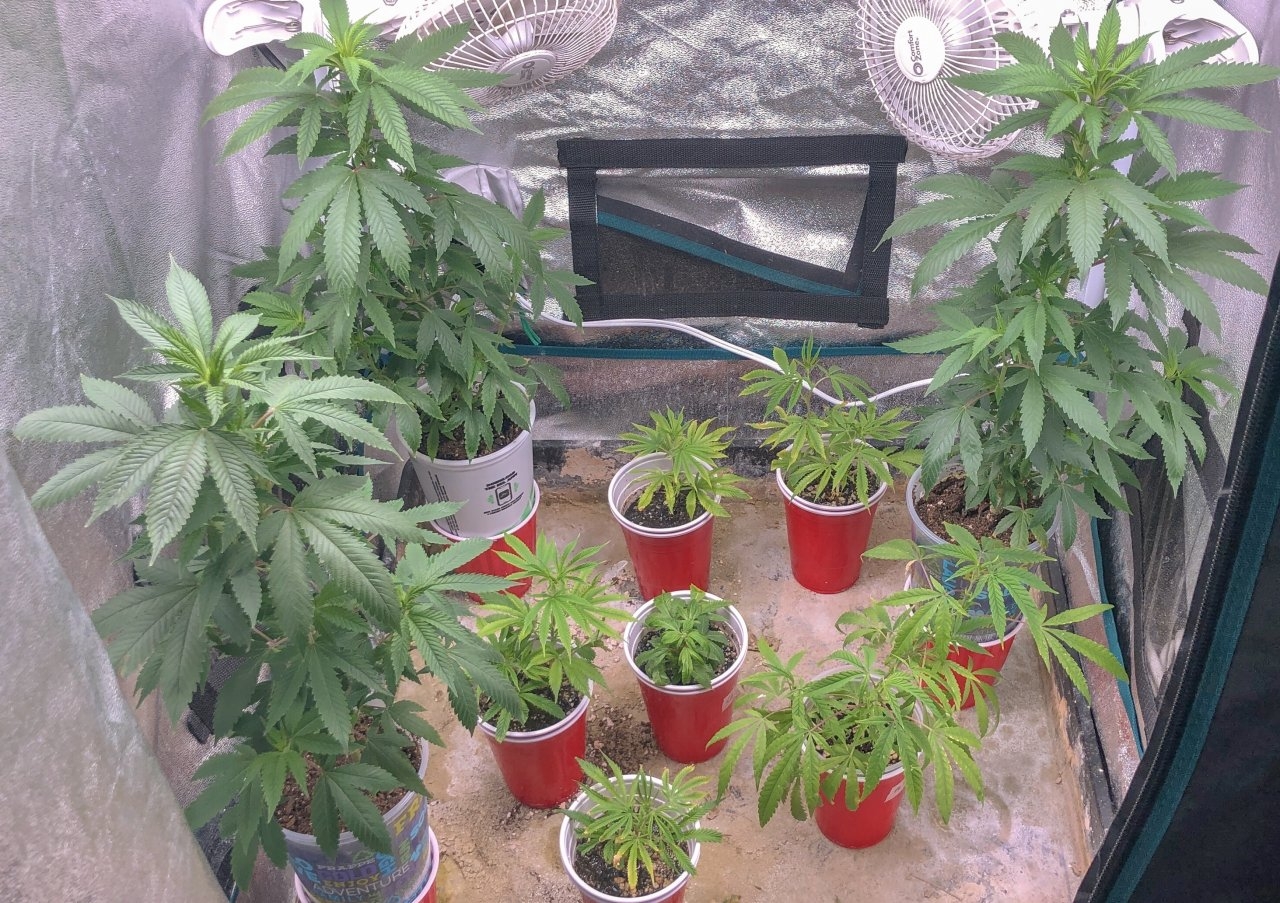 This is flower tent 1, the two flowering plants are Dark Devil Auto, then there is two Unknown OG, one Violet Haze x Unknown OG, one It’s It Punch, one Blueberry and one Black Cherry Punch. 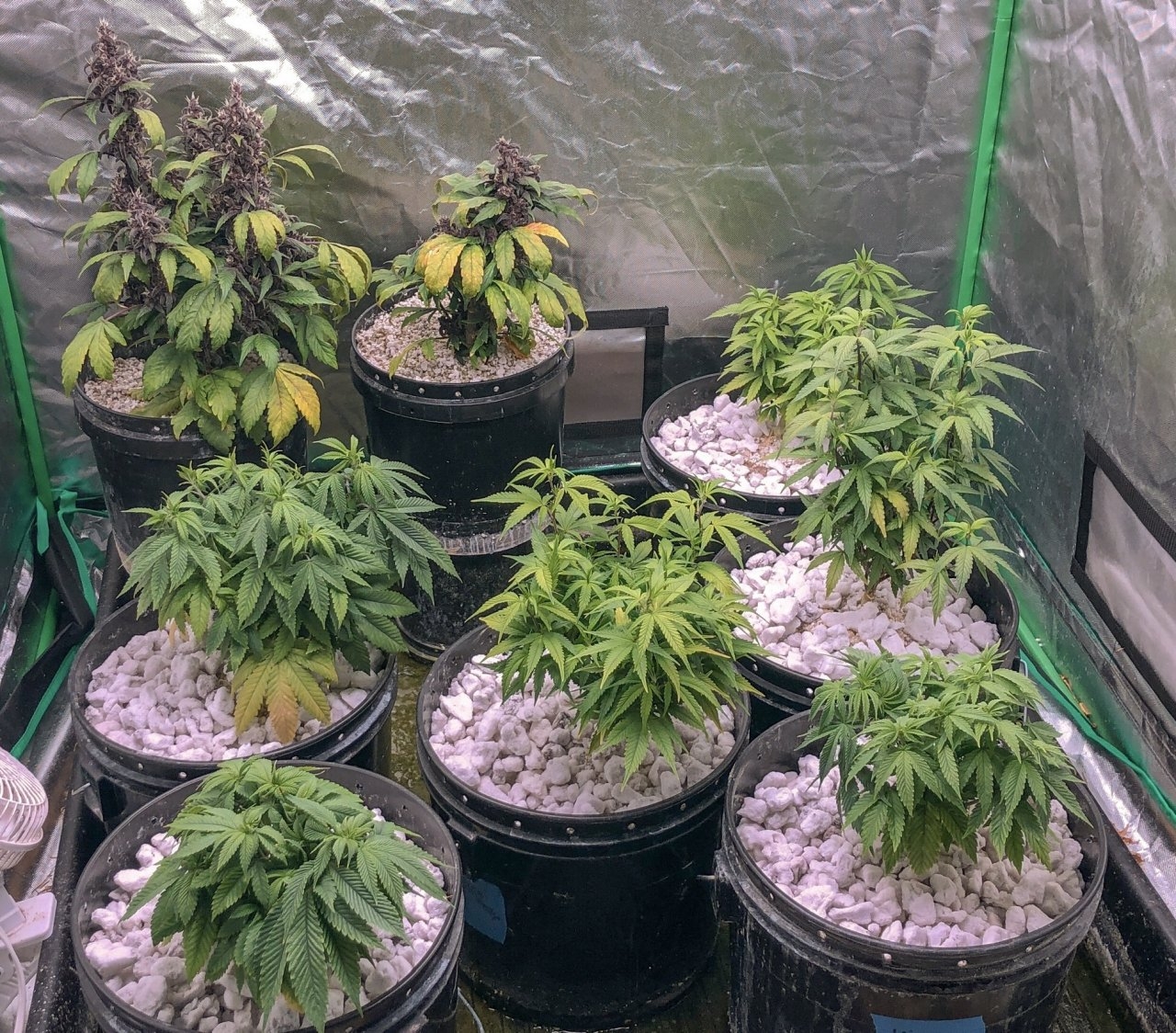 Are you Using Cannabis to Prevent or Attempt to Cure Covid-19?

Contests for Member, Nug, and Plant of the Month.

Problems? How to Ask for Grow Support

Oooh all those QB I'm jelly! One day ole PB will have a room full! Your plants and plans look awesome! Cheers, luck to your grow!

Welcome fellas thanks for following. Hopefully it’ll be interesting.

Love me some Candida!!!!
Current grow and nonsense.....
Scorpio's Cavalcade Of Horrors With Hempy, Genetics, Perpetual & Much Much More

I'll slip in and have one of Duggans Stellas, How soon to harvest DDA?

Is it a "day after"? How's the energy level? G'Day Mate
Dynamos Primrose Path
Face piles of trials with smiles, Moody Blues-Graeme Edge
Doing is not hard work and being is not lazy

Yes, Dyno, please help your self ...but please refill that cooler....the extra Stellas are over in the corner , right by all those non 420 nutes Doobs has there...Pfft!

I'll slip in and have one of Duggans Stellas, How soon to harvest DDA?

Is it a "day after"? How's the energy level? G'Day Mate
Click to expand...

I think the DDA has a couple weeks left I think I started them on March 5th.

The energy level is good I woke up refreshed and feeing good. Was a good day for sure.

Duggan said:
the extra Stellas are over in the corner , right by all those non 420 nutes Doobs has there...Pfft!

Lol the non-420 nutes are sitting on top of two bins of cooking kit soil so that should be a good soild base for that Stella cooler for another couple weeks.

Docs got a new journal? I’m in!
Looking forward to learning a thing or two DrD

I brought the guacamole

Vapor Pressure Deficit and What It Means to You!!

Archiweedies said:
Docs got a new journal? I’m in!
Looking forward to learning a thing or two DrD

I brought the guacamole

I think I bogarted that whole bowl, I love those good sized chunks of avocado mixed in with the mashed, they just seemed to give it that extra touch of unadulterated avocado taste.

Mmm.... that was tasty guacamole too. I’ll have some, please.

Those monsters from Age are gonna make everyone else struggle to keep up.

I'll move over a bit, so you can squeeze in.
Journal(s) in Progress:
Completed Journals & Reference Links

Are you Using Cannabis to Prevent or Attempt to Cure Covid-19?

Contests for Member, Nug, and Plant of the Month.

Problems? How to Ask for Grow Support

Thanks Salty! Have a hit of some well-aged Jack H..

Heyyyyyyy, I made the front row! Lookin forward to seein those bombs blow up!
We're all here cause we're not all there!

Subbed now, reading later...glad to be here!
You cannot flush nutrients from your buds! Click the two links below for the science:
#noflushclub link 1 • #noflushclub link 2
PERPETUAL...Carnival, Chocolope, and Power Plant now in progress. Come for the banter!
Do we need to pH adjust our nutrient solutions?
Low Stress Training (LST) - a tutorial
Supercropping - The Hows and Whys
Aeroponic cloning bucket - The Cloninator - build your own!
Rice Balls to Quickly Lower RH in Jars
Great macro pics for under $10