The Other Cannabis War : The Battle Over Hemp

In the annals of strange bedfellow politics, the story of how, in 2014, industrial hemp emerged from Drug War purgatory is an epic one. But even for long-time hemp advocates, the sight of Rep. Thomas Massie, a conservative Republican from northern Kentucky, biting jubilantly into a hemp bar on live TV last month was startling. Buried in February's $956 billion farm bill is an amendment, co-sponsored by Rep. Massie, that legally distinguishes industrial hemp from marijuana after decades of conflation. It defines hemp as an agricultural crop rather than a drug – and effectively frees American farmers to grow it for the first time in almost 60 years.

Widespread cultivation won't happen overnight - for one thing, the U.S. has no hemp seeds or hemp-processing facilities. But the sudden change in hemp's fortunes shocks its supporters. "If you'd asked me five years ago if I thought we could get Mitch McConnell to introduce a hemp bill, I'd have told you it was impossible," says Eric Steenstra, president of Vote Hemp, the advocacy group formed in 2000 to educate and lobby for hemp legalization in state legislatures and on the Hill. "This is huge."

It's also been a long time coming. For 20 years, legislators, farmers, hippies, activists, agency heads and agronomists have worked to recast hemp as a game-changer, an American cash crop that could jump-start the country's next economic revival. Kentucky took the legislative lead with outright advocacy by its agriculture department. Unlike a high-profile 2007 lawsuit in which two North Dakota hemp farmers took on the DEA without support from their elected officials in Washington, Kentucky brought its entire federal (and much of its state) delegation to the party.

Among hemp's biggest advocates are Kentucky's Republican senator, Rand Paul, the avowed champion of limited government who tweets about the tragedy of the drug war, and James Comer, the state's young Republican agriculture commissioner who successfully sued the DEA last month for seizing Kentucky's imported hemp seeds and for interfering with the implementation of pilot programs made legal by the farm bill. And Massie, a fiscal hawk active in last year's government shutdown who once studied robotics at MIT.

Colorado, Vermont and Kentucky wasted no time launching their industrial hemp research and the pilot programs provided for in the farm bill. In an obscure notice dated April 16th, the USDA alerted state and county officials that farmers in states that ok'd hemp production (15 so far) could now include hemp acreage in their crop reports. The floodgates have opened.

From California and representing the activist left: David Bronner, president of his family's Magic Soap empire. Bronner has thrown the weight of probably the most iconic hippie brand in the world behind hemp legalization and GMO-labeling initiatives. In 2012, Bronner locked himself in a cage with a thatch of hemp plants in clear view of the White House; he was preparing a hemp oil sandwich when he was sawed out of his prison by the D.C. fire department and hauled away by police. Explaining industrial hemp has taken decades. A lot of people don't know what it is and many think it's pot. "It's just been incredibly frustrating for the hemp industry that hemp has been lumped legally and in public perception with marijuana," Bronner tells Rolling Stone.

Hemp isn't weed and hemp can't get you high–it's a bust as a recreational drug. Hemp is marijuana's non-psychoactive sibling, derived, like weed, from the cannabis sativa plant. The current American hemp market is estimated at nearly half a billion dollars, with hemp's oil, seed and fiber used in food, carbon-negative building materials, and automobile composites that are already inside millions of cars. Hemp cultivation is also as old as the country itself. George Washington and Thomas Jefferson grew it, hemp was once legal tender, and several drafts of the Declaration of Independence were written on hemp paper. During WWII, American farmers were paid to grow it, cultivating more than 150 million pounds of industrial hemp to support the American war effort. The U.S. government's 1942 propaganda film, Hemp for Victory, depicts workers toiling happily to harvest lush fields of hemp; the fibrous plants to be later converted to materiel like rope and parachute webbing for the military.

Despite its patriotic bona fides, cannabis sativa was a victim of reefer madness in almost every decade of the 20th Century. Praised, taxed, vilified, confused with pot and blamed for killing sprees and the theft of American jobs by immigrants. The final nail in hemp's coffin was its classification as a Schedule 1 narcotic in 1970's Controlled Substances Act.

The U.S. is the only industrialized nation without a commercial hemp industry. All the hemp sold in the U.S., including the food and body products lining the shelves of Costco, the Body Shop and Whole Foods is imported. As Americans buy hemp, Britain, China, France and Germany are among the countries benefiting from America's incoherent drug policy. Last year, Canadian farmers grew 67,000 acres of hemp and say they may not be able to grow enough to fill this year's orders. David Bronner began adding hemp oil – imported from Canada – to his liquid soaps in 1999. "I thought this was the most ridiculous piece of the drug war," he says "that a non-drug agricultural crop was caught up here."

Even as hemp fought to differentiate itself from pot, it undeniably benefited from its association with it, successfully riding the wave of marijuana legalization in states throughout the country. And as hemp lobbyists worked to change cannabis laws, high-profile court cases highlighted the confusing and capricious application of federal drug laws to the non-drug plant.

In 2001, in a fit of drug war paranoia, the DEA declared a ban on foods that contain hemp including certain cereals, salad dressings, breads and veggie burgers–claiming that the foods contained THC. Effected businesses were given 120 days to dump their inventories. With the hemp food market just taking off, 200 hemp companies, including Dr. Bronner's Magic Soap, took the DEA to court. The lawsuit allowed the hemp industry to make its case in the media. Hemp won the bruising battle nearly three years later when a federal judge in San Francisco ruled that the government couldn't regulate the trace amounts of THC that occur naturally in hemp seeds.

When the first hemp bill was introduced in Congress in 2005, it was lonely business. "At that point we had Ron Paul, a pariah in the Republican Party, recalls Steenstra. "Nobody wanted to do anything with us and we could barely get co-sponsors. We'd say hemp and they'd say 'no, no, no, that's pot.' We banged on a lot of doors and worked in state legislatures to get laws changed there. A lot of states considered marijuana to be all cannabis and they didn't distinguish. We knew we had to change minds in both places." It wasn't until 2012 that the first hemp bill was introduced in the Senate, when Oregon's liberal senator, Ron Wyden, took to the floor to call federal hemp prohibition "the poster child for dumb regulation."

What worked was the lure of jobs and economic development. When Comer, a family farmer who served six terms in the Kentucky state legislature, ran for agriculture commissioner in 2011, campaigning on industrial hemp was a no-brainer. Kentucky was once the heartland of hemp production in the U.S. and people came out of the woodwork to talk to Comer about it. "And it was all over the spectrum," Comer tells Rolling Stone. "Liberals liked it because they were environmentalists and conservatives in the Tea Party liked it because it was an example of government overreach. Older voters were overwhelmingly for hemp because they remembered when their families grew it. They didn't know you could make automobile parts from it because at the time, all you made with hemp in Kentucky was rope."

Comer is credited with extraordinary consensus building in a state known for legislative gridlock and political enmity. Early last year, the Kentucky legislature passed Senate Bill 50 over the objections of the state police commissioner who insisted that state police conducting pot eradication programs couldn't tell the difference between hemp and marijuana.

On Capitol Hill last Thursday, Rep. Massie and Rep. Suzanne Bonamici (D-Ore.) each introduced amendments that would prevent the DEA and Justice Dept. from spending any money to interfere with states who are implementing their hemp laws. In the last 50 years there has only been one hemp vote in the House and that was last year. Suddenly there've been two more.

Without seeds, how long will it take to make hemp just another American crop like soybeans? "There's definitely a process we have to get through," says Bronner. "We've given the Canadians and the Europeans and the Chinese a huge head start on the modern global awareness of hemp. They've had years of breeding programs to optimize their cultivars for their climate conditions and we've been doing nothing."

Canadian agronomist Anndrea Hermann says finding the right hemp varieties for the U.S. is crucial. "I would never tell a farmer anywhere, 'let's start mass cultivation next year,'" Hermann tells Rolling Stone. Hermann lives in a country with a fully-regulated hemp industry. "And we have to have the farmers' voice. If we don't have farmers, we don't have agriculture."

In Kentucky, farming programs for veterans that teach families how to grow their own food have just sewn hemp in collaboration with the agriculture department and Vote Hemp. Mike Lewis, a military veteran and food security expert who founded the group in 2012 when his brother returned from the war in Afghanistan with a brain injury, now has grant money for a hemp textile project and part-time work for twelve people. This in a state with a 19% poverty rate. "Appalachia has a strong history of textiles," Lewis observes. "In my vision that's what's missing from rural communities, ag income. People used to survive off tobacco. If it has to be hemp for textiles, let's do it. People call hemp a panacea, a pipe dream, but look how many people came together from all walks of life in Kentucky to make this happen."

Rand Paul's father – who got on the hemp bandwagon on a dare from Ralph Nader – saw it coming. "I use [hemp's illegality] quite frequently as an example of government stupidity," Ron Paul told Mother Jones in 2011. "And I am sure I get credibility for this, especially with the young people, because that's where I get my strongest support. If you are concerned about the economy, then why are we doing these dumb things?" 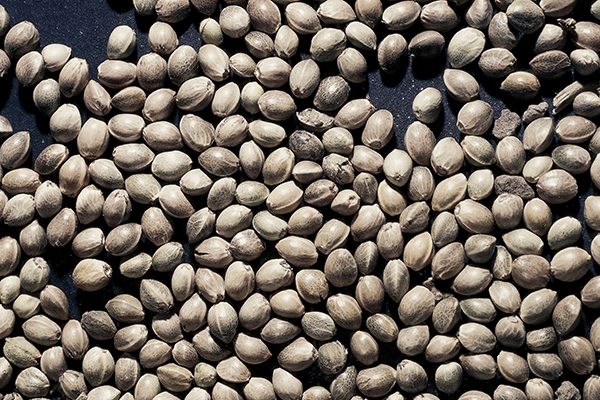 Nov 14, 2012
Truth Seeker
T
J
Commissioner Says That Kentucky Will Be 'The Epicenter Of Industrial Hemp'