Throughout history the main reasons human beings willfully kill other human beings are religion and greed. Although it is surprising that people steeped in a religion that worships a “loving god” revels in killing other humans, it is part of the “convert or kill” mindset that one the major Abrahamic religions, Christianity thrives and prospers on. It is not as surprising that human beings kill others out of greed, but for an industry that claims it exists to “save lives and heal infirmity,” it is astonishing that the pursuit of profit drives their pursuit of death and sickness. For the medical industrial complex, there is nothing as terrifying as a cure, or remedy, for a highly profitable and fatal disease like cancer.

It is little surprise that for a couple of decades at the direction of the multi-national pharmaceutical industry, and more recently the for-profit prison and law enforcement industry, the federal government and National Institutes of Health (NIH) have concealed a highly effective and completely natural remedy and relief for cancer. In just the past two weeks, the federal government and NIH have quietly confirmed that cannabis (marijuana) is very effective at killing cancer cells without harming healthy cells like radiation and chemotherapy. In fact, on the NIH website devoted to the hideous disease, Cancer.gov, they published the truth about marijuana and its effectiveness at combatting cancer in a stunning reversal of over four decades of deliberate fear-mongering and propaganda portraying the common weed as dangerous; all to satisfy the greed of the pharmaceutical industry, prison system, and law enforcement agencies at the local, state, and federal level.

What is even more encouraging is that although the NIH has known for a long time, with mountains of empirical evidence, that the compounds in marijuana, cannabinoids (delta-9 THC and cannabidiol [CBD]), are effective at killing cancer cells, they have discovered how it happens. After preaching since the 1970s that marijuana had absolutely no medicinal effect or value for human beings, and putting the weed in the same classification as her*in, the Department of Health’s National Cancer Institute is now “advising that cannabinoids are useful in treating cancer and its side effects by smoking, eating it in a baked product, drinking herbal teas, or even spraying it under the tongue.” The U.S. Department of Health also made a partial list of other highly-beneficial medicinal uses of marijuana such as reducing anti-inflammatory activity, blocking cancerous cell growth, relieving muscle spasms in multiple sclerosis sufferers, as an effective anti-viral agent, an anti-bacterial and preventing the growth of blood vessels that supply tumors.

Some of the other NIH studies have shown that cannabinoids reduce the risk of colon cancer, and are effective in its treatment. One study revealed that delta-9-THC killed or damaged hepatocellular carcinoma (liver cancer), and killed cancer molecules in “non-small cell lung and breast cancer cells.” One specific study of cannabidiol (CBD) in estrogen receptors showed “it caused cancer cell death while having no effect on normal, healthy breast cells.” Even in advanced cancer stages where it was not diagnosed early, when given as a supplement with chemotherapy, CBD and THC greatly enhance the effectiveness of chemotherapy as well as restoring appetite and relieving nausea.

Obviously with cancer as a major killer of Americans, its treatment is big business and even bigger money for the pharmaceutical industry and “treatment centers.” As many people have rightly suspected for years, the cure for cancer, or even a more effective and less-stressful treatment regimen, has been held hostage by powerful entities just so the pharmaceutical and hospital industry can continue to raking in hundreds-of-billions of dollars a year to “fight the disease” with radiation, pills, and numerous and endless surgical procedures. For example, on its own, the National Cancer Institute has taken in and spent over $90 billion allegedly trying to find a cure for cancer. The abomination is that the organization knew all along that a profuse amount of well-documented scientific studies proved that a 3,000 year-old “medicinal weed” any American could grow in their garden was effectively killing cancer cells, shrinking malignant tumors, and relieving the effects of the disease. Cannabis is also proven to reduce opioid (painkiller) usage by an average of 47% that drug companies could not allow to become common knowledge. It is likely why the reports that the NIH, Health Department, and National Cancer Center began advising of the weed’s benefits was only in British media, but not America.

There was hardly any reporting in June that President Obama eased restrictions on further and more comprehensive cannabis research by eliminating a major roadblock to open up substantial research on the weed’s medical value when it removed “additional review” of the Public Health Service (PHS). The last thing the law enforcement and highly-profitable prison industry wanted was for marijuana’s medicinal value to become public knowledge and face public pressure to decriminalize the weed. There is too much money in incarcerating Americans for using a weed for recreation that may also relieve a plethora of infirmities. As much as the pharmaceutical industrial complex wants to continue getting extremely rich off of slowly killing cancer patients with ineffective and expensive treatments, the law enforcement industry thrives on the continued criminalization of a common weed.

What is appalling really, especially for those who have witnessed or experienced firsthand the horrible suffering of cancer patients, is that there have been several scientific studies over the past twenty years, at least, that produced empirical data proving the effectiveness of cannabinoids in killing cancer. Still, because there is huge money in perpetuating the disease with ineffective drugs, fraudulent treatment centers, and manufacturing radiological machines it took until this past April for the United States government’s National Institute on Drug Abuse to revise their publications and admit the many, many benefits of cannabis for medicinal use.

It is likely that every American in this country has known, or lost, a loved one to the horrid disease and it is absolutely despicable, and frankly evil, that the medical industry helped keep an incredibly inexpensive and highly-effective cancer-killing drug out of reach. It is unclear who in government is responsible for helping conceal the now-proven medicinal benefits of weed, or who in government revealed that for at least a decade the National Institutes of Health and Department of Health have known that instead of being a “dangerous drug” like her*in, marijuana kills cancer cells and dog forbid may put a smile on a cancer patient’s face. Marijuana may not be a miracle drug, but with every new revelation that it does so much more than make a user hungry, tired or laugh it is easy to comprehend why every American is not growing and benefitting from its incredible health benefits; keeping it illegal is making the pharmaceutical industrial complex and prison industry incredibly rich while people are suffering and dying. 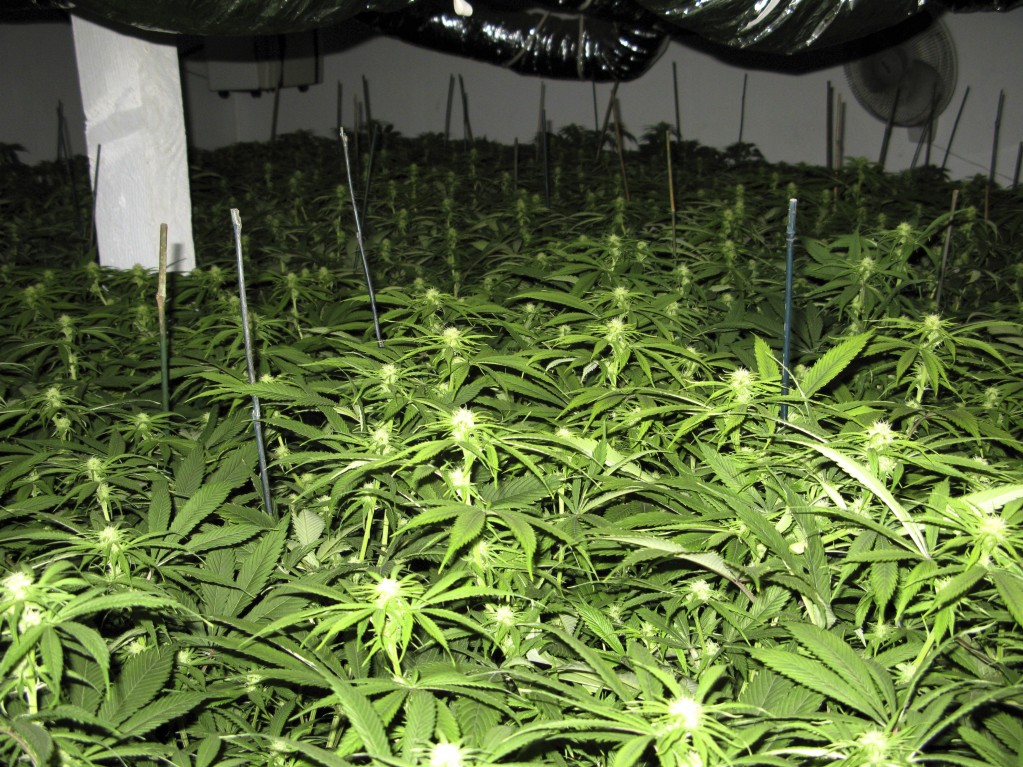 Known since the 70s huh? Those responsible for the continued prohibition and suppression of medical treatment should be hunted down like the dogs cannabis consumers have been treated like since.
My resource threads:
Seed Germination | Organic Closet Grow | Department Store Super Soil Mix | Anatomy of a Soil Bucket
I have quit this website, the censorship bar is way too low by any standards. A cannabis reform website that stiffles healthy debates, the irony is not lost on anyone!

I know personally that Cannabis has many Medical Benefits, I use it daily for Fibromyalgia and Chronic Pain, amongst a few other aliments.

I was ecstatic when I heard the news! However, after some exhausting research, this claim in many articles that have been posted online since yesterday, have been extremely misleading.

While it's absolutely wonderful news that The National Cancer Institute has confirmed that Cannabis does in fact kill Cancer cells. It did so in tests on mice and rats, not humans.

Cannabis, cannabinoids and cancer – the evidence so far

Virtually all the scientific research investigating whether cannabinoids can treat cancer has been done using cancer cells grown in the lab or animal models. It’s important to be cautious when extrapolating these results up to real live patients, who tend to be a lot more complex than a Petri dish or a mouse.

But that’s the lab – what about clinical research involving people with cancer? Results have been published from only one clinical trial testing whether cannabinoids can treat cancer in patients, led by Dr Manuel Guzman and his team in Spain. Nine people with advanced, terminal glioblastoma multiforme – an aggressive brain tumour – were given highly purified THC through a tube directly into their brain.

Eight people’s cancers showed some kind of response to the treatment, and one didn’t respond at all. All the patients died within a year, as might be expected for people with cancer this advanced.

The results from this study show that THC given in this way is safe and doesn’t seem to cause significant side effects. But because this was an early stage trial, without a control group, it’s impossible to say whether THC helped to extend their lives. And while it’s certainly not a cure, the trial results suggest that cannabinoids are worth pursuing in clinical trials.

The full post is a fascinating read. Source: http://scienceblog.cancerresearchuk.org/

Important Note: If you scroll all the way down to the comments section at that link Cancer Research UK laboratory researcher Kat Arney posted a a couple of comments regarding the recent stories in the press that the US government has “admitted that cannabis kills cancer” along with additional information regarding websites with long lists of scientific papers claiming that cannabis is a “cure” for various cancers.

Much more research is needed unfortunately before there is a full out cure for cancer in humans.
D

Informative article... Not sure what relevance the slam on God has but what ever floats your boat...

..We will never forget those who started the CCO mission here.
t Tim AKA: "420 Motoco", and his wife Mo, who is full speed ahead with that mission.....

Don't forget to vote in the monthly contests

I am glad the government is finally stating the obvious as fact. Rumor has it that sometime in the near future NASA will announce that the world is NOT actually flat.