Despite a cannabis habit that would probably kill Snoop Dogg, the 63-year-old Floridian leads a fairly normal life: He's a senior stockbroker at a large securities firm, who spends every Saturday volunteering with disabled adults and children, while grappling with a rare bone disease called multiple congenital cartilaginous exotosis.

When I called Rosenfeld at his office, he had just smoked one of the 300 pre-rolled joints the US government sends him every month as a patient in the FDA's compassionate Investigational New Drug (IND) program.

Rosenfeld's government-supplied stash is low potency - about 4 percent THC - and it doesn't get him stoned. The choice, he told me, is not his. Ever since he first tried pot in the early 70s, he's been unable to get high due to an anomaly with the cannabinoid receptors in his brain. Still, the cannabis takes the edge off of his chronic pain and, if you ask him, it's the only reason he's still alive.

When Rosenfeld was diagnosed with his disorder at age ten, the doctors found more than 200 tumors covering his bones. These tumors were expected to multiply and grow, and in the meantime, Rosenfeld had to deal with the painful bone splinters the disorder causes.

In the best case scenario, Rosenfeld would have to deal with a lifetime of incessant pain and heavy doses of painkillers. In the worst case scenario, the tumors would proliferate, become malignant, and kill him.

With these less-than-rosy life prospects, Rosenfeld left for college in 1971. At this point, he'd never tried marijuana - with all the top-shelf prescription narcotics at his disposal, he saw no reason to add an illegal drug to the mix. But eventually, he gave into peer pressure and started smoking socially.

Around his tenth time smoking a joint, Rosenfeld noticed something remarkable: He'd been sitting and playing chess with a friend for nearly a half an hour, completely pain-free. Previously, Rosenfeld was unable to sit in one position for longer than ten minutes due to the pain from his condition. He hadn't taken any painkillers.

"That's when I realized this illegal drug called marijuana was the only medicine that was doing this for me," Rosenfeld told me.

Rosenfeld dropped out of college in 1972 and petitioned the federal government for his right to use marijuana medicinally, but his pleas fell on deaf ears.

Then, in 1977, Rosenfeld met Robert Randall, who had been granted government permission to use marijuana medicinally the year prior. Randall was diagnosed with glaucoma in his 20s, and doctors warned that he'd likely be blind by 30. But one day, after smoking a joint, he realized that marijuana eased the spots in his eyesight.

"He immediately put it together," Alice O'Leary, Randall's widow and lifelong partner in his marijuana activism, told me. "He thought it was too incredible to be true, but through trial and error, he proved it to himself. So it became a regular part of our lives to try to procure marijuana."

Of course, this was illegal. In 1975, Randall and O'Leary were arrested for growing five marijuana plants on their sundeck in Washington, DC, just eight blocks from the Capitol. They could've easily paid the fine and been done with it, but instead, they decided to take on the federal government in court on the grounds of medical necessity.

Serendipitously, a UCLA study on marijuana's effect on inter-ocular pressure was just wrapping up. Randall became one of the final participants in the study and was able to show that marijuana did indeed help his glaucoma and could potentially stave off his blindness, if only for a few years. With this data, the judge presiding over Randall's case dropped the charges against him and O'Leary.

Randall approached the Food and Drug Administration (FDA) and National Institute for Drug Addiction (NIDA), the two agencies responsible for overseeing the federal marijuana produced for research, and petitioned them for access to their cannabis crops to treat his glaucoma.

"That petition was a real surprise to the federal agencies," said O'Leary. "Medical marijuana was nowhere on the radar at this point, and here's this lone individual coming into a federal office and asking for access to their supplies. Their first reaction was one of great compassion - they granted him the petition."

Randall became the first patient to use marijuana medicinally in the US since the government effectively banned marijuana in 1937. And with that, the compassionate Investigational New Drug program was born.

When Rosenfeld met Randall in Virginia a few months later, he explained how the FDA had been stonewalling his request for access to medicinal marijuana. Randall and O'Leary offered their help. Together, they established a compassionate IND protocol for Rosenfeld, and in 1982, Rosenfeld became the second patient in the program.

Throughout the 1980s, the IND program continued to grow, expanding access to AIDS patients and those afflicted with rare types of cancer. But in 1992, the Bush administration shut it down, and only 13 patients were grandfathered in.

Rosenfeld was one of those 13. Every five months, he receives six tins, each filled with 300 pre-rolled joints. All of the marijuana is grown at the University of Mississippi, which is the sole grower for all federal marijuana.

After harvest at Ole Miss, entire marijuana plants are sent to Raleigh, North Carolina, where the buds are fed into a cigarette machine. These cigarettes are then freeze-dried, placed in a tin can, and stored in a freezer for an indefinite amount of time. Rosenfeld says the joints he's smoking this year were packaged and frozen back in 2009, although he's had buds up to 13 years old.

"If you're talking about a connoisseur who wants to get high, they would be disappointed in the quality of the cannabis," Rosenfeld told me. "But I'm looking for the medicinal aspect and what I get sent to me is enough."

Rosenfeld and the other patients completed biannual progress reports with their doctor as a stipulation for their participation in the program, but oddly, these reports were never used to assess the impact of long-term marijuana. However, an independent study of IND patients from a physician named Ethan Russo found that the patients were as healthy as could be expected given their respective disorders. In other words, smoking hundreds of marijuana cigarettes a month had no discernible negative effects on the patients' health.

In fact, in some cases, marijuana actually drastically improved patients' quality of life. Randall, for example, kept his eyesight until he passed away at age 53, despite the fact that doctors told him he would be blind by 30. Similarly, doctors told Rosenfeld that his bone tumors would grow larger and multiply - yet since he began using marijuana, his tumors haven't grown or multiplied at all.

As for those who didn't make it into the IND program, many have worked to legalize medical marijuana on the state level, including the passage of Proposition 215 in California, which in 1996 became the first state to legalize cannabis for medicinal use. Today, 25 states and Washington, DC, have similar laws in place, and this November, at least nine other states will vote on legalizing weed for recreational and/or medicinal use.

Still, Rosenfeld and O'Leary are the first to acknowledge that the battle is far from over.

"In 1982, Bob Randall and I made a pact," said Rosenfeld. "We were going to teach the entire world about the benefits of medical cannabis. That's what we set out to do, but we haven't won yet for everybody. It's frustrating when the feds keep saying there is no medicinal benefit to cannabis because we know there is. We're living proof that this works." 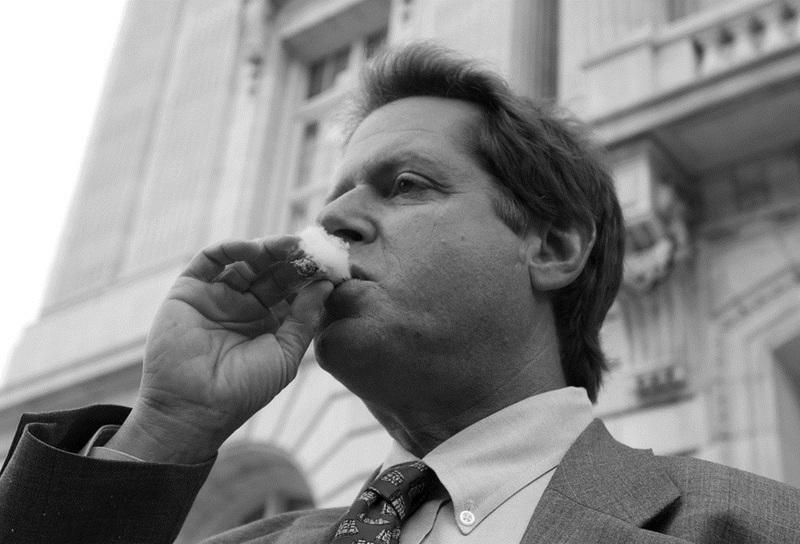 What a great study! This needs to be shared everywhere.
For all your Cannabis Seed needs, visit the Bonza Seedbank