The Wonder of Carolyn Wonderland

Austin, Texas -- perhaps the finest live-music city in America -- is the kind of town that is so diverse and so conducive to different artistic temperaments, there can be no single "Austin sound."

Still, if you wanted to distill what makes Austin Austin, you could do a whole lot worse than to start with Carolyn Wonderland.

Originally from Houston but now a central player on the Austin music scene, Wonderland has for years been one of Texas's best kept cultural secrets. She's known primarily for two astonishing gifts: her lion-esque singing voice and her aggressive, soulful guitar playing. But she's also known to take out the trumpet and dazzle her audiences every once in a while.

"There's really not one person who can fully represent Austin," said Wonderland who plays Saturday in Aptos as part of the 17th annual Santa Cruz Blues Festival. "There's all these different subgenres from country to polka to whatever. But, for a player, it's still the land of free lessons. You can go to a different club five nights a week, and learn something at each one."

Wonderland teamed up with Asleep at the Wheel lead man Ray Benson for her 2008 album "Miss Understood," where she incorporates everything from string quartets to lap steel guitar. Her music has been known to add many flavors including country, swing, zydeco, surf, gospel, and soul. Underneath her always evolving, always diverse musical horizons is a singing voice that fits most comfortably with muscular blues/rock and which has often been compared to the first lady of Texas blues, Janis Joplin.

"I grew up with all kinds of musical influences," she said. "Mom liked rock, Dad listened to a lot of jazz, and Pa-Pa, he liked the big-band stuff. So, it comes natural to me to embrace it all."

Parallel to Wonderland's musical interests are her interests in activism. She feels that she's in a position to help others. One of those opportunities is participating in a forum called "Instruments of Freedom," in which musicians discuss how their artistic work can lead to making a socio-political contribution. She also works to distribute musical instruments to those who otherwise can't afford them, and to help in establishing affordable health care for musicians.

But perhaps her most passionate political commitment is in addressing what she sees as the injustice of marijuana prohibition. Her tune "Annie's Scarlet Letter" is told from the point of view of a woman serving time for selling pot to provide for her young son. The song has been used as a rallying cry for groups looking to decriminalize pot, and Wonderland has lent her efforts to such groups as the National Organization for the Reform of Marijuana Laws and the Santa Cruz-based Wo/Men's Alliance for Medical Marijuana.

"I strongly believe in the legalization of marijuana," said Wonderland. "It should be a right to use it. It's a plant. It should be available for recreational use, whatever use you see fit. And, right now, it would be a great boon to the economy." 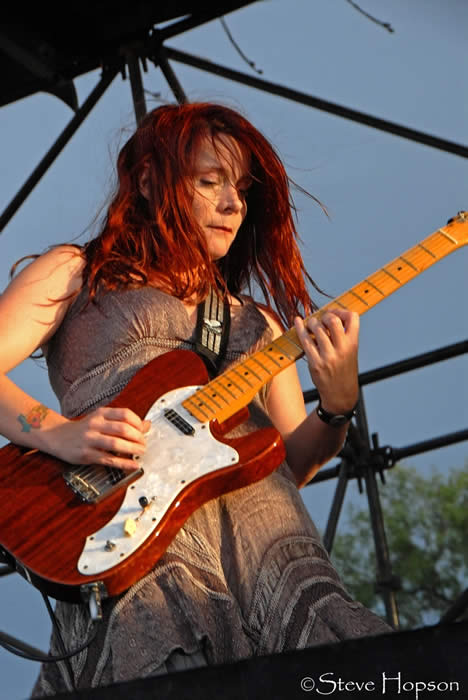