So up until now I have had a closet grow going with three simple plants of unknown genetics. None of this was planned and you can say the opportunity to grow just jumped into my lap. Because of this the setup is less than optimal with most of my equipment just hacked together from whatever was laying around. My entire setup is a mix of computer equipment, DC fans, duct tape, cardboard and random garbage that was just sitting around.
Actually, the only real equipment I have are the LED lights and the soil.

Anyway. Up until now things have gone smooth. I have plagued by stunted growth early on but the plants seem to have reached a good size now and spent the last twenty five days on bud growth. I am on a 2 to 3 day watering schedule depending on the weather, and I am using regular tomato fertilizer to feed the plants with every third watering.

So heres the deal. I just noticed some strange spots on several of the leaves and I want to know what is going on. Extensive googling did not yield optimal results, and so I am still not sure if this is a problem I need to do something about. In case it is, I thought I should ask sooner rather than later to see if anyone got any idea. My initial thought is that it might have something to do with heat. My area have been really warm for the past week with temperatures in my grow closet reaching as high as 36Â°C (97 Fahrenheit).

Heres a few pictures of the leaves. The spots appeared in the last couple of days, and the leaves themselves feel really dry and crisp around the affected areas. 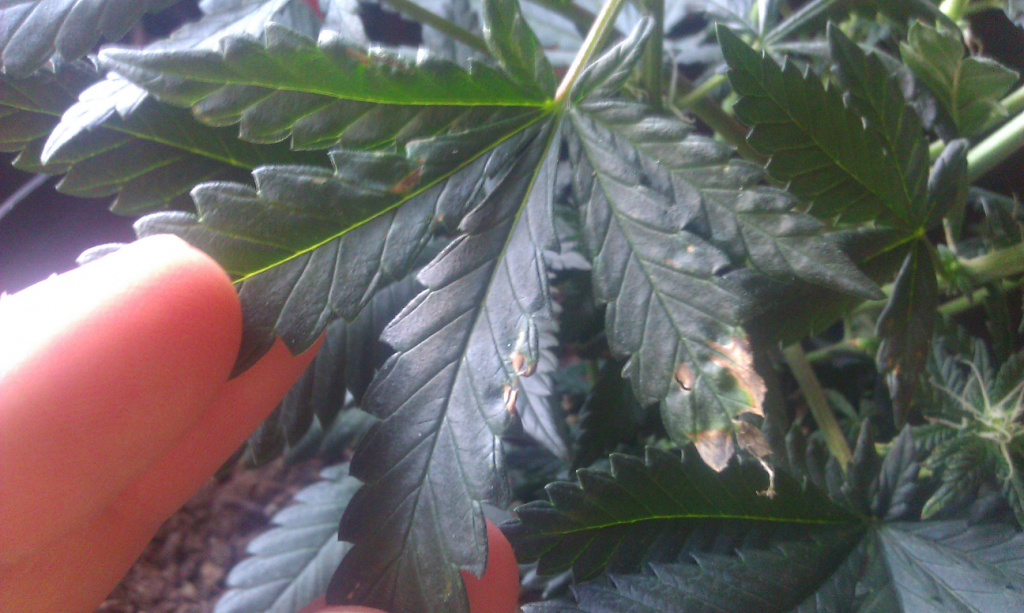 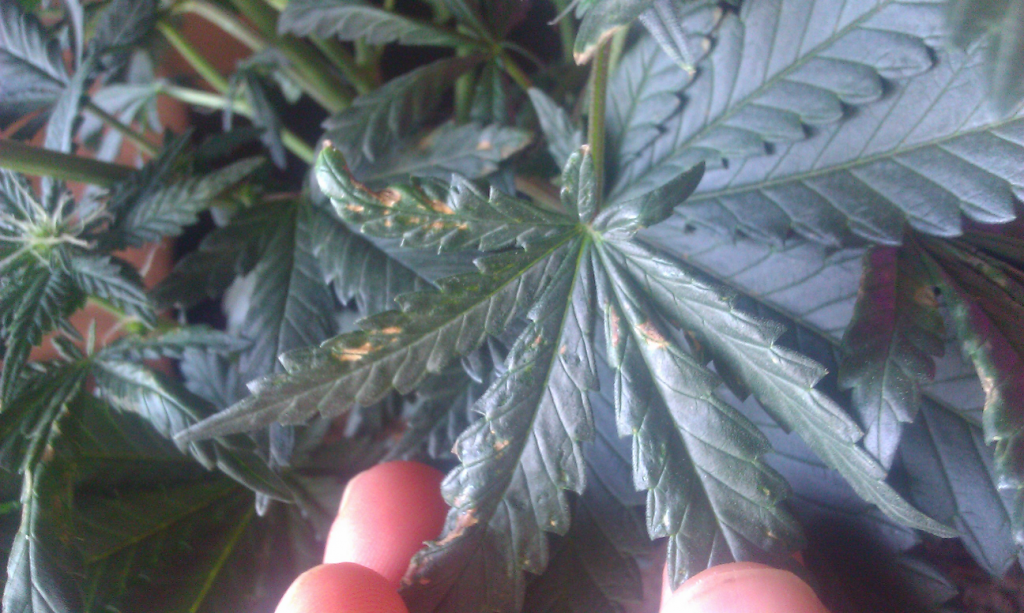 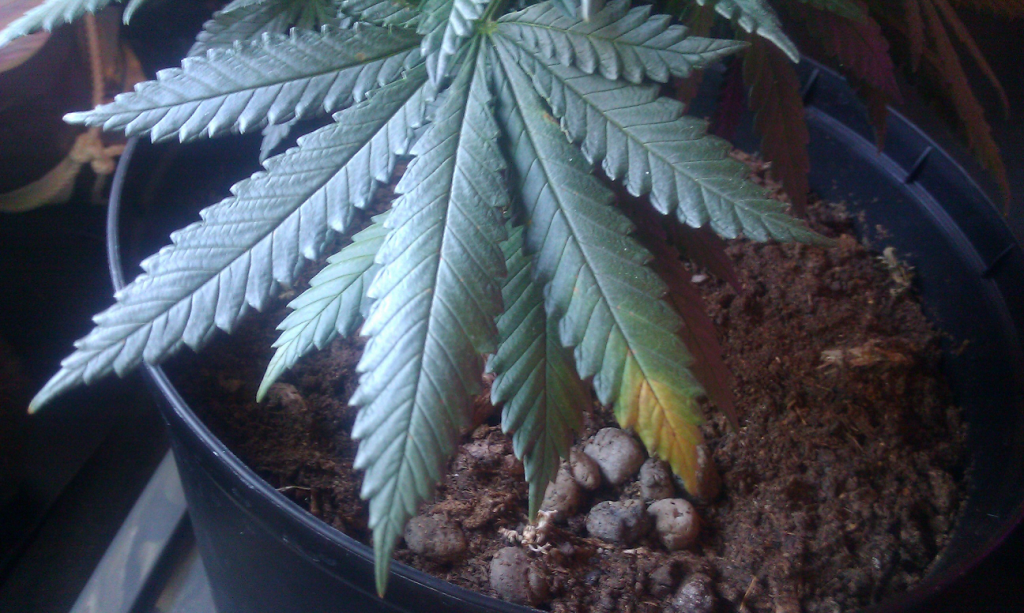 It should be worth noting that all the affected leaves are clustered together on the same branch of the plant, although I do not know if this is relevant.

I also have two more leaves near the top of the plant that show signs of... well, something. 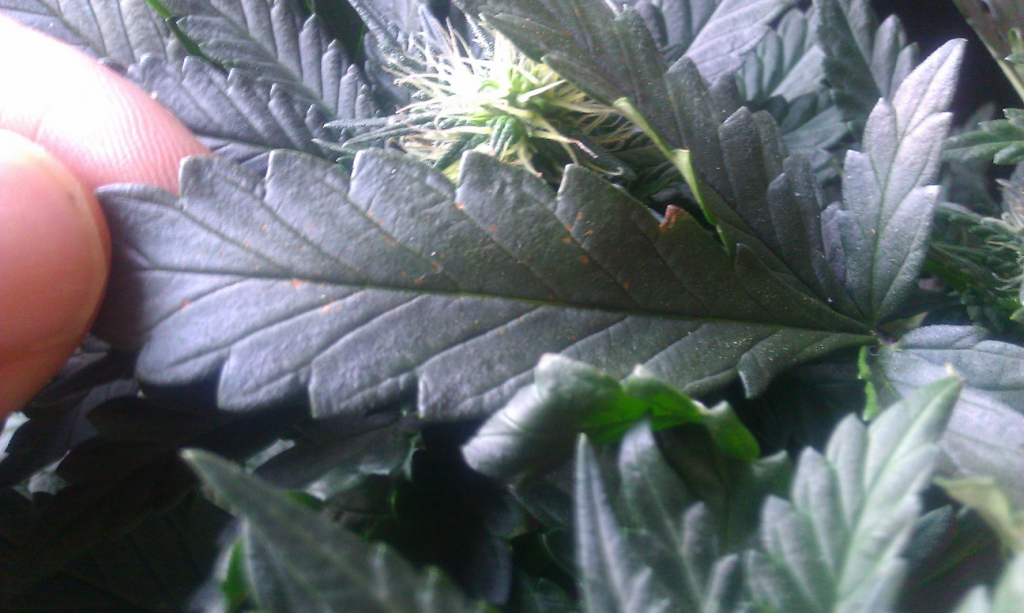 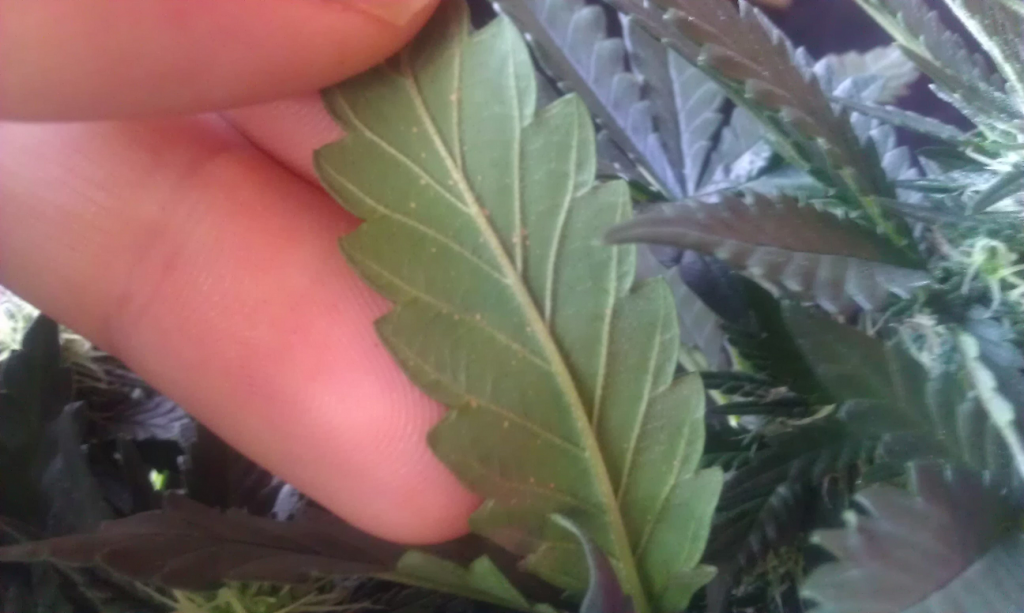 All other leaves of the plant look really healthy, and the buds are developing nicely with plenty of trichomes all over the nearby leaves. Heres a picture of one of my plants to end with. I think it looks good 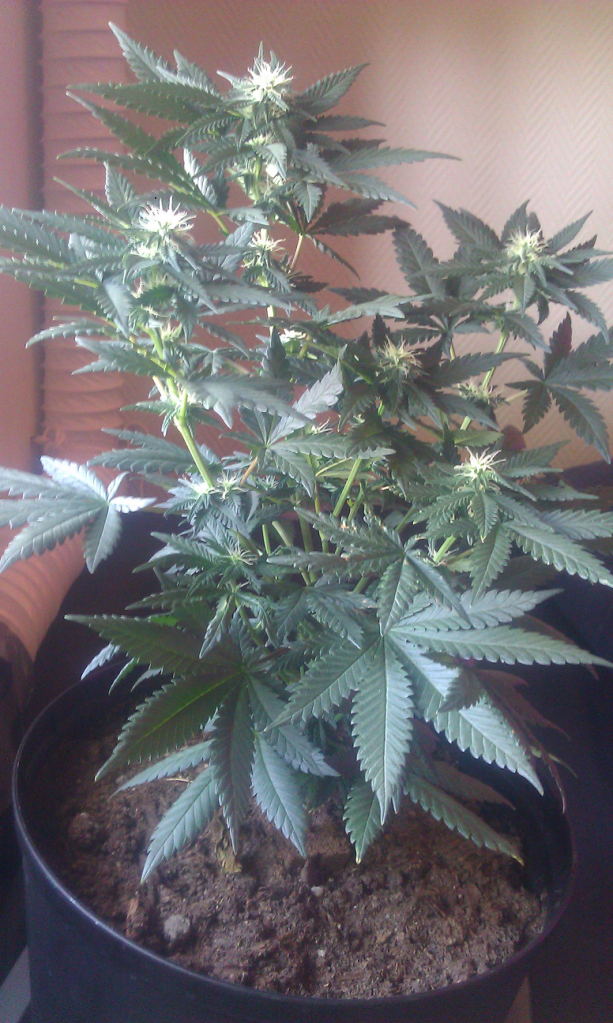 What are the NPK numbers on your fertilizer?
What micronutrients does it contain?

How strong/weak are you mixing it?

Is it a time release nutrient thaat you put in the soil, or a nutrient you have to mix with water?
420 Contests
Everything You Need To Grow Cannabis
Forum How-To Guides For Beginners

My growing medium is called "Vegetable Soil" which was in the top of the prize range of available soils at the garden center near me. It drains well, is quite loose, and I mixed it with clay pellets to make sure the roots had something more to hold on to. The pots themselves are 26cm in diameter.

My PH appears to be around 7.0 (dont have a digital PH meter). Nutrient strength is 6/1.3/3 and I use 14ml per liter of water. Water is tap water (relatively pure, no additives like chlorine or fluoride) Nutrient solution is supposed to be a tomato fertilizer and contain copper, iron, manganese, zink and molybdenum.

cool ,,man im definitely a poor mans grow..i bought a soil called baccto lite premium..it came as 0.85-0.15-0.10 NPK..for my part my seeds have flourished..i bought some viagro liquid that 10-10-10..my plants didnt like it..however after flushing she came rite back..and the discoloration in my leaves has resolved..im using tap water..so i have no idea of PH..no meter..wouldnt litmus strips work?..i been watchin think youll get some good bud..btw...ITS A GIRL!!!!...SHE FINALLY LIFTED HER SKIRT!!

Where is this plant among the three? How are they arranged under the light?

What is the distance between the top of the canopy, and your LED light?


rick3066 said:
cool ,,man im definitely a poor mans grow..i bought a soil called baccto lite premium..it came as 0.85-0.15-0.10 NPK..for my part my seeds have flourished..i bought some viagro liquid that 10-10-10..my plants didnt like it..however after flushing she came rite back..and the discoloration in my leaves has resolved..im using tap water..so i have no idea of PH..no meter..wouldnt litmus strips work?..i been watchin think youll get some good bud..btw...ITS A GIRL!!!!...SHE FINALLY LIFTED HER SKIRT!!
Click to expand...


Rick it's easier to get your questions answered by reading in here: https://www.420magazine.com/forums/...-grow-marijuana-everything-you-need-know.html Or making a new topic for your question. Don't hijack his thread man! lol. Litmus strips can be used to measure runoff, but won't tell you accurately what your soil PH is. You can use a digital PH meter, which are the most accurate, or use one of the cheaper analog meters. Myself, and a bunch of others use them, and although not as good as digital, they still help.
420 Contests
Everything You Need To Grow Cannabis
Forum How-To Guides For Beginners

Hmm, well the light is a 180W LED UFO, the plants are arranged like this beneath:

They should all receive the same amount of light. The distance between the light and the plants are 15cm. They do not appear to have gotten any worse since I made this thread though except that a few more spots like the ones in the picture 4 and 5 have formed on the other plants.

97F is too hot. Your LED may also be too close. Are those spots little animals or just spots?

They are not pests. They are just small brown spots that look more like damage from exposure than anything else. And I know the temperature is too high, its just that it has been one of the warmest weeks so far this year and my growspace is rather small and hard to properly ventilate. Temperatures dropped down to a more managable 90F today due to bad weather. With a little luck the temperature will go down even more.

From what I understand the plant will grow optimally around 85F, is this correct?

As the temp goes above that, growth can slow down

And good thing Rico was here, I totally read right past the temperature in your first post

That low huh? I suppose heat stress is a probable cause for the damage seen in the picture then. I will keep a close watch on the plants over the next few days then and see if they improve with the lower temperatures expected this week.

Really appreciate all your help.

Tardigrade89 said:
That low huh? I suppose heat stress is a probable cause for the damage seen in the picture then. I will keep a close watch on the plants over the next few days then and see if they improve with the lower temperatures expected this week.


Yeah, even though some strains are grown outdoors in very hot and arid climates, the optimum grow room temp range is 70-80.

https://www.420magazine.com/forums/...aintain-my-growroom-humidity-temperature.html
420 Contests
Everything You Need To Grow Cannabis
Forum How-To Guides For Beginners

Are you feeding with your water being at ph7?

Regular tap water. It's close to PH neutral in my country.

I would try and keep it closer to 5.8 to 6 for your dirt. May run into ph problems. Otherwise. Just a head up. Good job on the plants keep it up

I see. Just out of curiousity, exactly what kind of impact will lowering my PH by 1 have on the plants? And what are some good ways of doing it? If there is any organic method I can use then I prefer that over buying a chemical solution at the garden supply store. 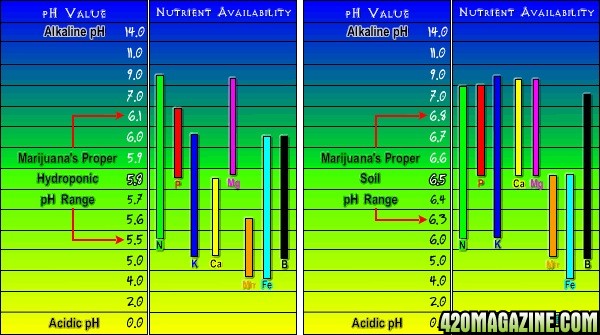 Not having it in the right range will cause nute lock out. Look at this chart and you will see what I mean. I use ph up and down cuz I have more control over it, just my option tho. I am not a big organic grower so hopefully someone here can give u a home remedy .
Hope it answers your question

You should at least try to up the air flow..

Just wanted to say that I bought a new exhaust fan and installed it. Temperatures are down to 25C and the plants are starting to look better. The bad news is I broke the main kola on one of my plants while moving them, snapped it almost off. Tried stabilizing it with duct tape and its been two days now, it still seem to be alive.
Anyone know how this will affect the bud production? The plant is four weeks into flowering.

Well, that was a temporary fix it seems. Temperatures keep rising. At the moment the air near the intake fan is a staggering 30 degrees and my plants were boiling. Had to move everything down into the basement where I have no hope of ventilating the smell

At least its a comfortable 24 degrees down there.

I just hope they have not taken any permanent damage from this and that they can recover nicely. Considering they are 36 days into flowering do you suppose bud production will be affected? They were sitting in 30 degrees for almost a week

S
Curly leaves: could it be rootbind, or overwatering?

P
I think I have a problem