They Can Grow Hemp, But Weld Farmers Have Questions

With Colorado regulations officially in effect for the newly legal cultivation of industrial hemp perhaps the less notable of changes set forth in Amendment 64 Weld County farmers say the crop would likely be a lucrative one, but there are still questions to be answered. The Colorado Department of Agriculture implemented regulations requiring farmers to register with the agency to grow hemp, which is contrived from the cannabis plant, but does not contain the amounts of the psychoactive substance THC found in marijuana.

While it is still against federal law to grow hemp, state regulations allowing it went into effect on Dec. 30 and growers can begin registering to grow industrial hemp either for commercial or research and development purposes on March 1. The regulations require registrants growing for both commercial and research purposes to report how they plan to sell or use their crop, and those growing for research and development purposes may grow no more than 10 acres of hemp at a time. There are no limits on acreage for commercial growers.

Ron Carleton, the state's deputy commissioner of agriculture, said his office has seen a "fair" amount of interest from farmers who are considering the crop. "Now we're just kind of waiting until March to see how many people actually register," he said. Kent Peppler, a Mead farmer and president of the Rocky Mountain Farmers Union, said hemp would be a good crop, especially because it requires little water and fertilizer, compared to other plants, and it has a wide variety of uses, from fiberglass to fabric.

"I haven't heard anybody who's really sat down and said they're against growing hemp," Peppler said. "I think everybody realizes in Weld County and in Colorado in general that we need a wide variety of crops to make a living, and certainly hemp adds to that." Many say hemp – banned in the U.S. since the 1950s – has been unfairly lumped in with its genetic cousin, marijuana.

Carleton said the U.S. Attorney General's Office has issued a statement regarding Amendment 64, opting to withhold enforcement of federal laws while keeping an eye on how the state's regulations are developed and enforced. Still, Peppler and Carleton said farmers have expressed some concern that they're not sure how growing hemp would affect their eligibility for federal programs, like crop insurance with the U.S. Department of Agriculture. "You're not gonna risk your safety net for an alternative crop," Peppler said. Carleton said his office has asked U.S. Secretary of Agriculture Tom Vilsack about whether farmers who grow hemp on one portion of land would still be eligible for USDA programs on their other crops. He said he hasn't received an answer, but he hopes to have one before registration opens on March 1.

Peppler added that changing the federal law banning hemp would likely require a widespread educational campaign that would distinguish hemp from marijuana. He said his organization supports industrial hemp production, and he'd like to see farmers get the federal go-ahead to grow the crop. "It has some hurdles to go over, but it's certainly an option for farmers," Peppler said. Residents will have until May 1 to register to grow hemp this year. Once they register, they're required to provide proof that their hemp contains no more than 0.3 percent THC. Carleton said his office will randomly select roughly one-third of registrants' crops for inspection during the growing season. Annual registration fees are $200 plus $1 per acre for commercial production. For research and development purposes, fees are $100 plus $5 per acre.

Leonard Roskop, a longtime farmer who grows mostly corn on his southern Weld County land, said he would consider hemp as a crop, but details like how well the crop will grow in these parts remain to be seen. He said getting seed will likely be difficult since it's illegal to import it from countries like Canada, where the crop is grown legally. "I still think it would be a great product," Roskop said. "The only problem that I see in harvesting is just to have the right equipment. I think the market will establish itself." 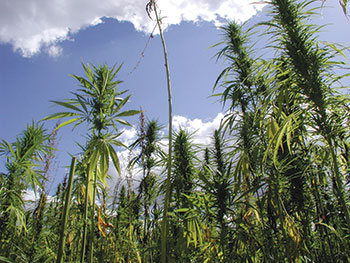 interesting to see how this hemp growing turns out. wish the gov didnt have their heads up their own asses
H

fresh88 said:
interesting to see how this hemp growing turns out. wish the gov didnt have their heads up their own asses
Click to expand...


I agree with your assessment concerning the Government and their heads. Marijuana was made into a devil and so forth by Dupont and Hearst back in the 1930's and perjury was committed in the tax laws and so forth and even in the news by Hearst back then. Dupont had Hemp added to the list so he could get it's synthetic fabrics in the market with no competition from Hemp products. Otherwise he never would have been able to get those lousy synthetic products to market with the hemp industry still thriving and growing. Hearst was invested in the Wood Industry and Paper Industries and was afraid of the competition from hemp paper and so forth. If our Government was working the way they where suppose to they would have caught Hearst and Dupont in their conspiracy to knock out that industry to begin with.

Our Government does not work for the people as it is suppose to but it does work for the filthy rich and large corporations only. That is why they have been needling away at the Constitution of the US since it was written.

The people need to throw out those who do not support the original constitution and rebuild the Government from the ground up to live by that Constitution. Even Obama is guilty of over ruling the constitution he swore to up hold. He is attacking our Freedom of Speech rights because people are speaking out against the atrocities he and the Government are doing as we speak. To think I thought he would make a good President? I was wrong. They are all corrupted at this point in time.

It is time that the people take back the Government and get rid of those who are against the Constitution of the US in the government. All we have now are a bunch of fascists and communist and corrupted individuals in our government right now. Get rid of them. Try them for Treason and be done with it.

Get rid of fake federal agencies such as the FDA which is barely federally funded but mostly funded by the Industries that it is suppose to police. Get rid of the FCC that took away or free rights to the airways. Get rid of the Federal Reserve which also is not really Federal.

The NIH is not hunting for cures to cancer since they own part of the patents rights to Chemo Chemicals. They suppress cures or steal them and try to make profits off them. If the inventor or discoverer does not give them the patent rights they crush them.

The FBI does not prosecute those who are not following the Constitution in government and other agencies so if they are not the solution then they are part of the problem also and the Patriot Act was created by a government sanctioned Terrorist act to begin with which is why traces of Nano-Thermite Explosives was found in the dust of the World Trade Center. Only our US military was experimenting with this type of explosive. It is also why the building collapsed straight down and not fall to the sides. Which was also why air support and security was not present when it was suppose to be to protect the air space from those hijackers using the planes to create a diversion as to how they WTC was destroyed. The US Government also created Bin Laden in the first place. They trained him. Same with Iraq. They gave them the chemical weapons of mass destruction to begin with. The second time around there was no weapons of Mass destruction, it was really all about the oil. They are creating their own wars and Obama is trying to do the same so as to declare Martial law and rule unopposed.

It is time to clean house!!! Just so we can relax again and prosper.