OSHAWA -- People from across southern Ontario came together at Memorial Park in Oshawa on Saturday, July 2 to protest current marijuana legislation and raise awareness about access to medical marijuana.

Approximately 250 protestors rallied at the park from 2 until 6 p.m., and marched the streets of downtown Oshawa at 4:20. During the march, protestors openly smoked marijuana and shouted anti-prohibition slogans, while police officers on bicycles blocked off streets.

The event is geared towards people who are legally licensed by Health Canada to smoke marijuana for medical purposes, though several others who did not hold such permits attended and openly smoked the herb as well.

While last year's event saw a few arrests, that wasn't the case at this year's peaceful event.

Organizer Ben Fudge said the choice by police to not disrupt the event shows progress in the advancement of the event's message of acceptance.

"I'd say it was great this year," Mr. Fudge said after the march. "There were no arrests and there was no negative police interaction whatsoever."

"It was really good to be able to walk downtown and have no issues with police," he said. "It showed a lot more acceptance on their part."

After the march, Mr. Ivancicevic led the crowd in a round of applause for Durham police officers for providing their assistance.

Mr. Fudge is licensed to use medical marijuana to treat pain from severe arthritis, resulting from injuries caused when he was run over twice by a drunk driver while camping. As a result of his injuries, he uses a motorized wheelchair to get around.

He said he hopes to see marijuana fully legalized, but with restrictions around public usage.

He said because marijuana must be smoked, and because it produces a distinct odour, it is not as easily accepted as more traditional forms of medication, such as pills. He said he has faced verbal and physical harassment, assault and illegal searches as a result of medicating in public, even though he holds a legal permit.

"We're recognized by the federal government to be exempt from cannabis laws," Mr. Fudge said. "We're not interested in breaking the law, we don't want to break the law, and we don't want to offend anybody. We just want to be able to take our medicine. This public perception, and this stigma, that we face, happens every day."

"(Medical marijuana users) have the right to consume in public, and they should be free from harassment and discrimination," added Mr. Ivancicevic.

Mr. Fudge would also like to see marijuana legalized for users who do not hold medical licenses.

"There's a fine line between medical and recreational use," he said. "If someone is using marijuana for relaxation, who's to say it's not medicinal?"

"My doctor was OK with prescribing me Percocet, Oxycontin and strong meds like that... I wanted medical marijuana years ago and my doctor refused."

He said he had to switch doctors in order to gain access to a medical marijuana license.

Ken Yelland attended Oshawa's Cannabis Day protest for the first time this year. He said before getting a permit for medical marijuana, he was jailed twice for using the herb as medication. He said he needs to use medical marijuana to be able to walk without debilitating pain caused by disintegrating disks in his back, and severe arthritis in his knees and hips. He said he was also forced to switch doctors to gain access to medical marijuana.

Many families with young children attended the event, saying they don't think their children should hide from or avoid medical marijuana users.

"The only harm in cannabis is the law," Mr. Fudge said. "It's all about education and mutual accommodation." 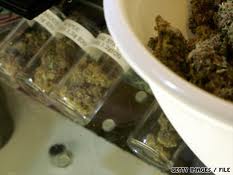 It may not have changed anything outright, but it sure is a show of some progress!

A great article which should be read by everyone. RD