This Company Has A Product That Can 'Make Your Weed Better', So I Tried it Out

A cannabis producing and processing company based in California has been selling and shipping a range of their products to UK customers. They also ship to other countries where the import and export of the cannabis flower is illegal, such as Brazil, Spain and Germany. This is the first time a cannabis-derived product has been shipped on an international scale, and the products have been reaching UK customers with no problem — but before you start to fret, everything is completely legal.

The products that Blue River Extracts sell are cannabis-derived extracts of terpenes. This means they contain no THC, CBD or other independently psychoactive chemicals that are specifically targeted by legislation in the UK. Terpenes are essentially the molecules that produce the unique flavour and smell of any given strain of cannabis, and don't have any significant effects when consumed alone. But when combined with cannabis or hash, they supposedly produce a superior flavour and an increased or enhanced "high".

I called Tony Verzua, owner of Blue River Extracts and umbrella company United Cannabis, to find out more about terpenes, and what his motives were for setting it all up.

"Terpenes are found in nature — they are found everywhere in all kinds of plants and herbs," he explained over the phone. "They make up all the flavours and aromas that come through our senses, noses and mouths."

So when we smell a particular type of orange, for example, we are smelling the terpene profile of that orange. But what makes cannabis terpenes so special?

"Cannabis is a unique plant," said Tony. "It is one of the oldest surviving plants on planet earth. They have found at least 140 different types of terpene available in the plant at any one time. Whereas, you take most other plants or herbs — something like lavender or eucalyptus — they produce a high abundance of a single type of terpene, as opposed to the 140-plus [of cannabis]."

This is why, when you walk past someone smoking a spliff in the park, or pick up the scent outside somebody's open window, the smell is immediately recognisable. But what use do these terpenes provide beyond the nice smells and flavours?

"We call it modulation," says Tony, referring to how terpenes can enhance the effect of cannabinoids. "What we have found is that particular terpenes that are found in cannabis turn on a part of our endocannabinoid system called CB2 receptors. THC and CBD doesn't really work without terpenes. If cannabinoids were the guitar, terpenes would be the guitar player."

Tony stressed that what he sells are essentially aromatherapy oils. Even though cannabis strains have a relatively unique and complex terpene profile, these are the same molecules that are present all over nature — therefore, they're an entirely legal molecule, and one that would be virtually impossible to make illegal.

The idea and product is pretty revolutionary. "This is my way of being an activist," said Tony. "This is a business way of saying: 'You know what? I'm testing the waters, pushing it.' How do you lock someone up and tell them what you're doing is illegal? How do you prove the molecules are actually from cannabis?"

Tony's passion for cannabis is not a recreational one, but stems from his medical needs as a patient. "I have used cannabis as a patient since 1996," he said. "All the medical products I sell are ones I have invented for my own consumption over the years. Prohibition has dominated a big part of my life. It's the right time to do this; ten to 20 years ago I'd be in jail." 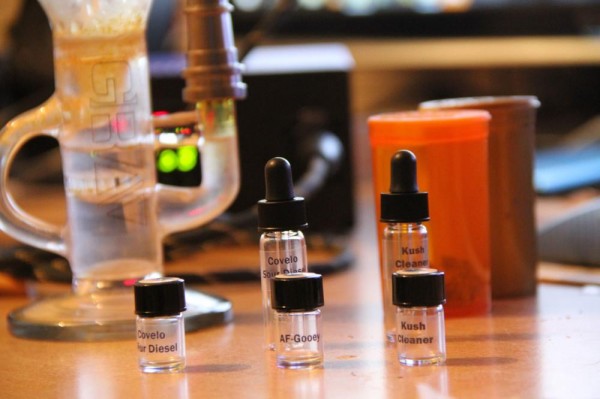