This Pot Company Is Cleaning Up The Weed Industry With Aeroponics

In terms of the numbers, the legal marijuana industry is making strides: The market was valued at $7.2 billion in 2016, and projected to grow at a compound annual rate of 17%. Recreational sales are expected to quadruple by 2020–recreational marijuana is legal in eight states and D.C., and that number is predicted to rise to 18 states by 2020. In that same time frame, the industry could grow to employ more people than the manufacturing sector.

But for all these advancements, the growing techniques, by and large, remain mired in outdated agricultural practices. Marijuana is a thirsty crop: A single plant requires up to six gallons of water per day to grow. Outdoor farming practices degrade the land by clearing forests for growing space and deplete water reserves–a cause for concern in states like California, which is prone to droughts–and indoor growing operations are not much more sustainable: A typical indoor farm uses more energy per square foot to create lighting conditions and regulate the humidity and temperature than a data center, and the same substantial amount of water as an outdoor farm.

Given that demand for the crop shows no sign of slowing, the industry has to innovate. Companies like Green Life Productions have leveraged new LED lighting technology to reduce energy use in indoor operations, and now, a new startup called GrowX is using aeroponics–a system that GrowX founder JP Martin calls the “magical unicorn” of agriculture–to cultivate cannabis in controlled, indoor environments.

The idea of aeroponics has been circulating for at least a half a century after scientists studying plant roots realized that exposed roots, nourished by water vapor, would still yield plants. Aeroponics requires no soil nor any hydroponic apparatus–instead, the roots of the plants are suspended in controlled, moist environments and fed that way. NASA used aeroponics to grow beans aboard the MIR space station in 1996; research from that experiment, Martin says, showed that aeroponics requires 95% less water than traditional outdoor farming, 40% less water than indoor hydroponic systems, and results in growth rates as much as 300% larger than traditional yields.

“But despite the obvious benefits, it’s been largely uncommercialized,” Martin tells Fast Company, though AeroFarms, a non-marijuana vertical farm in Newark, New Jersey, is using the technology as the backbone of its operation. Aeroponics is inherently challenging for a number of reasons. Plant roots are hypersensitive, and the success of the technology depends on meticulously regulating the size and speed of the water droplets used to mist the roots, as well as the temperature in the “root chamber” from which the plant grows. Water the roots too little, and you’ll kill the plant; water them too frequently, Martin says, and you’ll inhibit their ability to absorb oxygen from the air, which is the key to aeroponics.

Martin, who has a background in data security, was working for Elon Musk at SpaceX during the height of the California drought about four years ago. Looking for ways to grow his own crops while not straining the state’s overtaxed water supply, Martin came across aeroponics. “I thought, this is the holy grail of farming, why isn’t everyone using this technology?” he says. Drawing on his skills as a software engineer, Martin began to build his own systems, figuring that if he could develop a solid platform for this technology, he could bring it to the market as a commercially viable agriculture alternative.

Two years later, Martin had left SpaceX and was focused on developing his own technology, GrowX, full-time. He brought on co-founder and financial industry veteran Darwin Hunt to run operations and ironed out a prototype system. While GrowX’s tech is still too new to have measurable outcomes, Martin is confident the startup will be able to deliver metrics in line with, or better than, those from the NASA study.

Though aeroponics can be used to grow a variety of crops, GrowX is piloting with the cannabis industry because it is one that has largely been left out of the agriculture innovation conversation. While leafy-greens-producing vertical farms and indoor growing operations are proliferating across the country and consistently improving upon existing technology, cannabis, having been hovering on the edge of legality until recent years, has a lot of ground to cover.

An incubator that launched in Oakland at the end of 2015 is looking to close that gap. Gateway is the first cannabis-specific startup incubator, and GrowX was one of its first graduates; after finessing his pitch during his time working with Gateway, Martin is rolling out GrowX’s technology to a client in San Francisco, as well as the tenth-largest cannabis producer in Denver, which has a 40,000 square-foot grow and is looking to expand its output sustainably. While pricing will likely adjust once GrowX moves beyond the early stages, each aeroponic unit now retails to clients for $1,000.

The cofounders of Gateway, Ben Larson and Carter Laren, have backgrounds in coaching Silicon Valley startups; they came up with the idea for a cannabis incubator after working with a group of new startups at the San Francisco-based Runway incubator, all of whom happened to be cannabis-focused, and also entirely unprepared to enter the high-stakes world of tech startups. Their pitches’ lack of cohesiveness caused investors to close their checkbooks, Larson says, but what was noticeable was the interest in the ideas themselves. Larson and Laren saw an opportunity to develop an incubator devoted to the specific challenges at the intersection of weed and tech–namely, that that intersection is very little trodden.

“While cannabis has been commoditized in the tech industry, tech is sort of missing from the cannabis industry,” Larson says. Through Gateway, he and Laren have recruited Silicon Valley mentors and local cannabis-industry pioneers like Dale Sky Jones of Oaksterdam University, who are united around the idea of modernizing and growing the industry in a sustainable way. 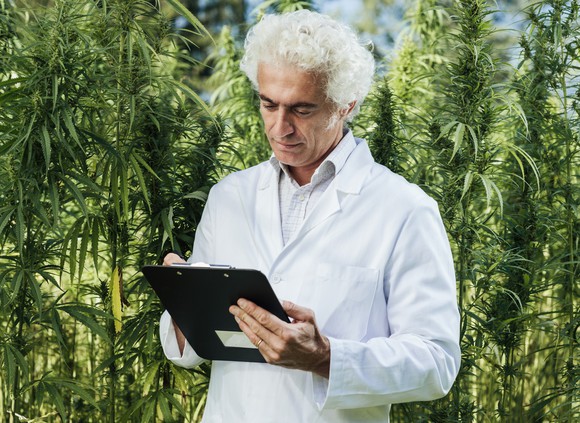 A Growing Problem: Lightening The Carbon Footprint Of Cannabis Farms