Utahns continue to show broad support for a proposed 2018 ballot initiative to legalize medical marijuana in the state, according to a new poll by The Salt Lake Tribune and the University of Utah's Hinckley Institute of Politics.

The new survey finds 75 percent of Utah voters either strongly or somewhat support the proposed initiative, all but mirroring a July poll that had 77 percent of voters backing legalized medical marijuana.

The latest poll found that some 93 percent of the state's Democrats support legalization, compared to a smaller majority of Republicans – 65 percent – who also back the idea.

And it appears support for medical marijuana is growing in Utah: A Tribune-Hinckley Institute poll commissioned in January found 54 percent of voters somewhat or strongly backed legalization.

"Things are trending in the right direction," said DJ Schanz, executive director of the Utah Patients Coalition, the group organizing the ballot initiative.

"It's a positive change in our state and across the country. We're seeing such a positive [stance toward medical marijuana]," said Christine Stenquist, president of Together for Responsible Use and Cannabis Education (TRUCE), which is working to educate Utah voters on medical marijuana.

Filed in June, the ballot initiative would allow consumption of medical marijuana topicals, oils and edibles for qualifying illnesses such as Alzheimer's disease, cancer, multiple sclerosis, post-traumatic stress disorder, chronic pain and autism. Smoking the drug, driving while intoxicated and all public uses would be prohibited.

The coalition held 10 public hearings over the summer. About 1,000 volunteers are working to collect more than 113,000 signatures from voters, which are due to the state by April 15. Schanz said the organization is roughly a third of the way to meeting the signature requirement.

If successful, the question of legalizing medical marijuana would go on the November 2018 ballot. A state-commissioned analysis said the proposed law would cost Utah $400,000 per year, after startup costs of $1.1 million.

Medical marijuana backers are wary that support may dip again once the initiative is approved for the ballot and opposition groups solidify, Stenquist said. Organizers will watch closely the positions of Utah law enforcement and the state's predominant faith, The Church of Jesus Christ of Latter-day Saints, as well as how federal marijuana laws are ultimately enforced by President Donald Trump's administration, she said.

Uncertainty over how the Trump administration would handle marijuana persuaded Utah lawmakers not to move forward with legalization during the 2017 legislative session. They instead approved measures to fund research about medical marijuana's potential benefits.

Rep. Brad Daw, R-Orem, a leading medical marijuana advocate on Capitol Hill, said he is drafting his own legislation for the upcoming session. Daw said last week he wasn't surprised with the poll numbers; they align with the support for medical marijuana he's heard in his district.

But Daw said he doesn't support the ballot initiative. He worries its language is overly broad, and it would be a step toward legalizing recreational marijuana. He said he raised concerns that proposed language in the law might indirectly allow smoking of the drug, which makes him uncomfortable.

Some 29 states, along with Washington, D.C., Guam and Puerto Rico, have legalized medical marijuana in some way, according to the National Conference of State Legislatures.

TRUCE leader Stenquist, 45, has taken medical marijuana in Utah for five years, after she found it offered relief from debilitating pain and nausea she suffered as the result of brain tumor and surgery in the 1990s.

As the daughter of a police narcotics officer, Stenquist said she knows how, to some, her illegal consumption of medical marijuana makes her look like "one of the bad guys." She said that's why she's pushing hard for legalization – so that others like her can feel comfortable seeking relief through marijuana.

"My quality of life has improved," she said. 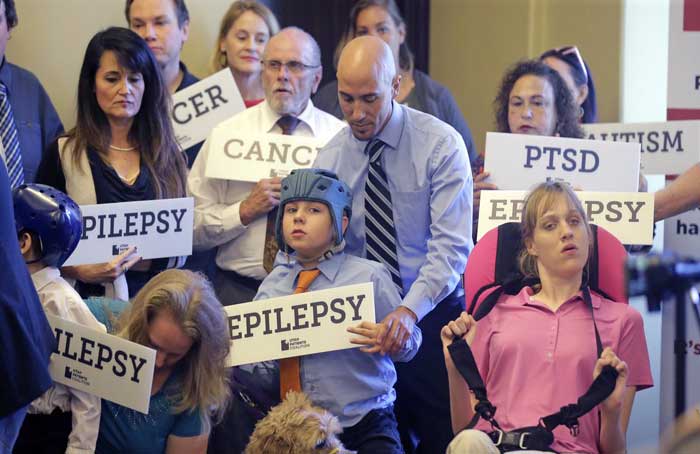