Well, my old neighbor gave me a Phototron 2, for free, and it actually worked. He bought it from a friend of his that was moving for 15 bucks. The unit is about 4 feet tall and 2.5 wide, and i think about 10 years old

Here's whats in it:


I bought a clone that was roughly 3 weeks old. I transplanted it on Aug 10th and it has been running on a 16/8 light cycle since. I was told it was Indica and he explained he could tell by the leaves. He said Sativa's leaf veins are much closer together, which I also looked at. I read some place that Indica is better for growing indoors.

The Photoron originally had 3 u-bend 40w floro lights, which died and I replaced them 3 34w u-bend bulbs, as it was the brightest u-bends i could find locally. I water about every other day and i give her fish emulsion every other time I water. I do let the tap water sit out for at least 24 hours before i use, due to the chemicals in it. I mist the plant about 4 to 5 times a day. When I was given the Phototron it also had digital thermometer, but it started giving me incorrect temp readings so i threw it away. It was running at about 82 to 89 degrees during hottest part of the day, but that was before I added the fans. This is my second attempt using th Phototron and first time growing indoors. The first Phototron attempt, I used seeds and I didn't have the HPS bulb yet. I ended up killing them because I had to go off island and they never got watered.

So here are my questions....

How much taller will the plant get after I change it to 12/12? Some of the fan leaf stem's are turning red and a couple of the newer leaves are deformed. Is this because she's not getting enough phosphorus? Should I be leaf feeding using the bloom booster? How often should I be watering? Can I use one those 270w Son Agro bulbs with the same ballast? I'll upload some pics i took tonight....

Any ideas or suggestions would be great....

Thanks ahead of time.... 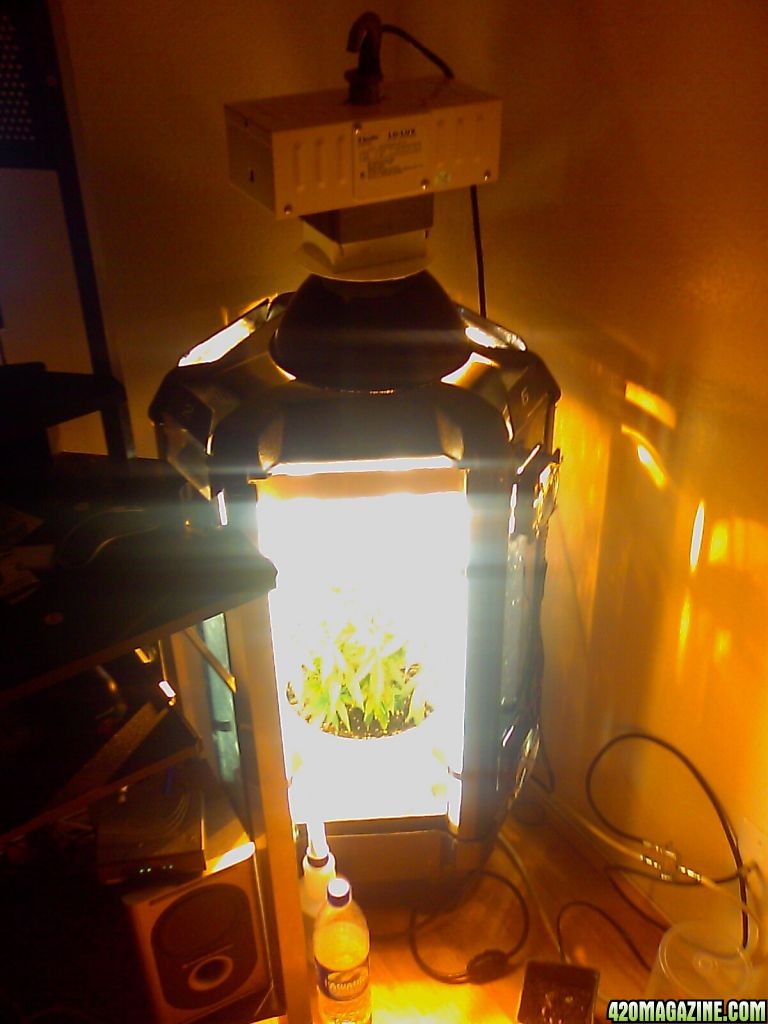 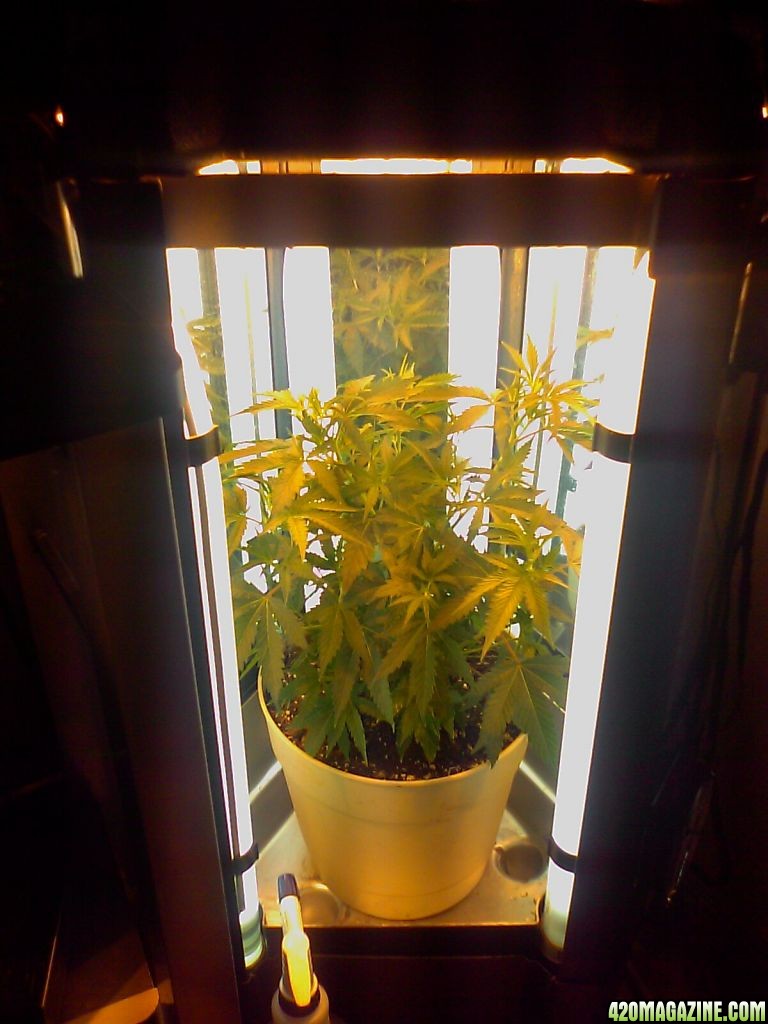 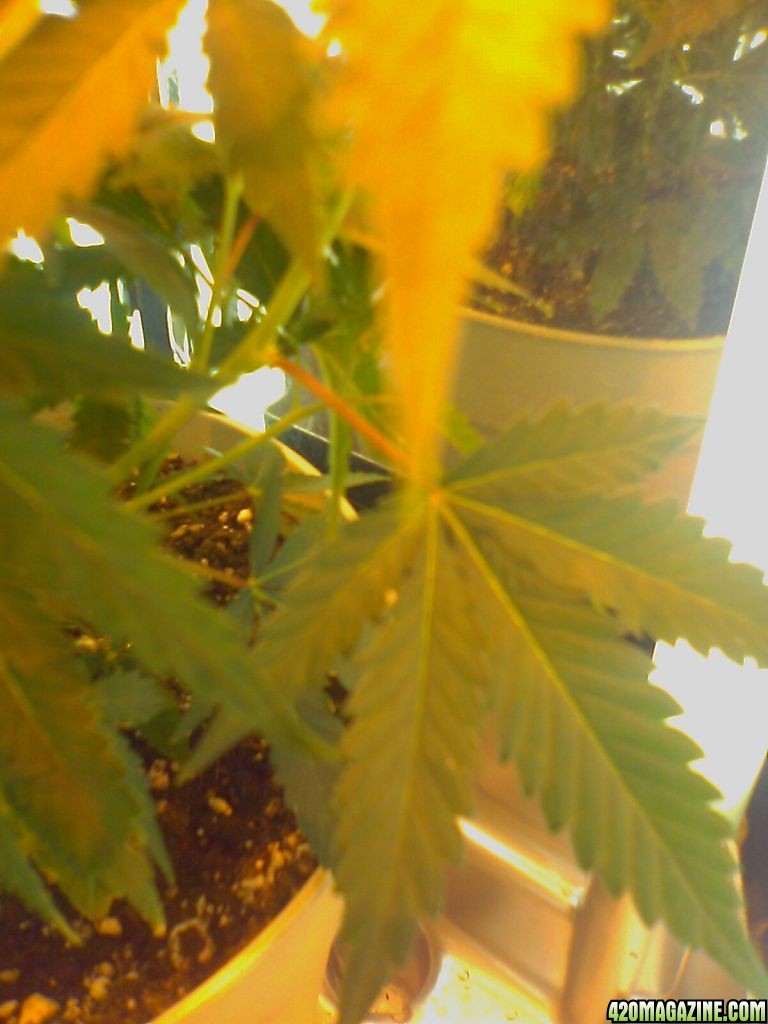 This is one of the fan leaves with the red stem 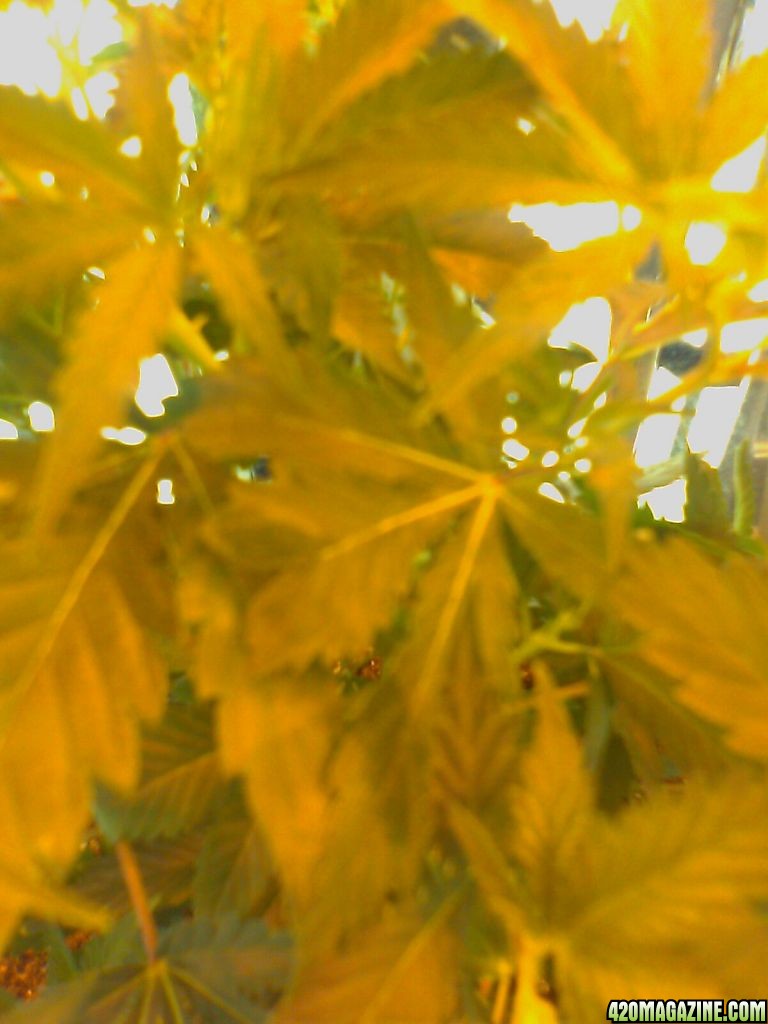 This one of the deformed leaves
Last edited by a moderator: Nov 20, 2008

Youth & Brains are no match for Old Age & Treachery
We are passing saints of craziness, each given to his own madness, brought together briefly by the greater madness that rules all.
My 1st Grow
My 2nd Grow
My 3rd Grow - 1st Hydro Attempt
My 4th Grow - Swamp Grass Hydro
My 5th Grow
My Current Grow
T

I thought there might b a problem with the bulb/ballast combo. Does that mean I should only be using MH bulbs? Do you think a 400w MH bulb would be to hot for for the small phototron?I also seem to be having a problem with the floro ballast that came with the phototron too. Some of the ubends don't come one sometimes or light up completely....

Thanks for the help!

tokenherb , I am by no means an authority, as I am only on my 3rd grow,
However I have a phototron , a 250w hps and a 400w hps. There are several
pics of my phototron on my first 2 grows. Imho, the heat given off by a 400
watt hps or mh lamp would be quite a bit much for the small interior of the phototron..
You'd have to vent the bejebus outta it, heh. A 250 or so may work...I dunno.
Try 'em, slap a thermometer in there and check it out...

I *think* there is also a difference between MH & HPS ballasts as well, unless ya cough up the clams for one of those
newer (and cooler) dual electronic ballasts that handles both, which are still a bit pricey.

Anyway...good luck, read these forums and experiment... lol
That's what I've done and it's gotten me this far.

Youth & Brains are no match for Old Age & Treachery
We are passing saints of craziness, each given to his own madness, brought together briefly by the greater madness that rules all.
My 1st Grow
My 2nd Grow
My 3rd Grow - 1st Hydro Attempt
My 4th Grow - Swamp Grass Hydro
My 5th Grow
My Current Grow

I doubt you have a HPS bulb in a MH ballest....You would know something was wrong.
A 400watt will get really hot inside that small space of a phototron. I think a 250 is perfect.
StonerGrower​
420 Magazine​
Creating Cannabis Awareness Since 1993​
How to Grow Marijuana
Please Visit our Sponsors!
Please Help Support Our Mission!
Forum Guidelines - Please Read Before Posting
420 Photo Gallery Tutorial - How to Post Photos​
T

When I ordered the ballast/bulb combo I told them I wanted a 250w HPS. I didn't know anything about ballasts at the time so I didn't know any better. I was looking into getting one those Son Agro bulbs so I Iooked up my ballast to see if it would work. The part number is ALX400MH-QT-LB. I found the catalog for the manufacturer and it appears to be a 400W MH ballast....

So you should get a new ballast.
StonerGrower​
420 Magazine​
Creating Cannabis Awareness Since 1993​
How to Grow Marijuana
Please Visit our Sponsors!
Please Help Support Our Mission!
Forum Guidelines - Please Read Before Posting
420 Photo Gallery Tutorial - How to Post Photos​

Is this grow still alive?
If so, please update us with some pictures and info.

If you need any help with posting photos, please read the photo gallery tutorial
Photo Gallery Guide - How to Resize, Upload & Post Photos