The decision was prompted by the fact that a current moratorium on the issue set by the city expires Oct. 6.

The council first adopted an interim urgency ordinance in October 2009 (Ordinance No. 2009-08) creating a 45-day moratorium on the establishment of medical marijuana dispensaries within Danville.

The ordinance was initiated as a result of multiple contacts between potential operators of dispensaries and Danville property owners.

Council members had extended the original moratorium twice, hoping the courts or Legislature would provide clear direction to cities on the extent of the ability to regulate or prohibit dispensaries.

But that direction has not been provided, and conflicts remain between federal and state law, in addition to ongoing litigation.

"We declared a moratorium in the hope that issues would get resolved," Ewing said. "Unfortunately, none of that has happened."

California passed Proposition 215, the Compassionate Use Act of 1996, which decriminalized the cultivation and possession of marijuana for medical purposes for seriously ill individuals and their primary caregivers.

In 2003, the state approved SB 420, which provided additional rules regarding medical marijuana, including Health and Safety Code Section 11362.775, which provides that qualified patients and designated caregivers may "collectively or cooperatively cultivate marijuana for medical purposes" without being criminally prosecuted.

While the Compassionate Use Act and SB 420 legalized medical marijuana under state law, possession and distribution of marijuana remain illegal under federal law.

The extent to which the federal government will enforce the law remains unclear.

In Qualified Patients Association v. City of Anaheim (2010), the court ruled that cities may not ban all dispensaries simply by relying on federal law.

"A number of cities have allowed dispensaries but regulate them by keeping them away from schools and providing operational restrictions," Ewing said.

On the other hand, more than 130 cities have imposed bans on medical marijuana distribution, prompting lawsuits.

"There are advocacy groups out there that have sued the cities and say, 'You can't ban it when the initiative says you can dispense it,' " Ewing said. "They haven't won any lawsuits yet."

The council's decision to adopt an ordinance banning dispensaries in Danville came quickly and easily.

"I would love to see it go to the pharmacies and not through individual dispensaries," said Vice Mayor Candice Andersen.

The ordinance will be presented to the council in September. 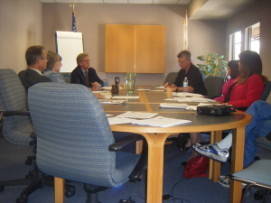 Marijuana Outlets Back Before Council