Strain (Name):Who knows, but its called Trouble Hash.
Location: SF Bay Area, California
Taste: The taste is just hashy. Kind of mild spice. Nice.
High: The high is great. More heady, somewhat body.
Appearance: Black on the outside due to the oxydation of oils. The inside is a nice greenish color.
Texture (Dense/Airy/etc...): It is really sticky and maluable. It was stuck to the baggy. I had to freeze it to get it out.
Smell: Not much smell, just the signiture hashy smell.
Overall: 9.2/10
Additional Comments: This is some of the best hash I have seen in a while. I am pretty sure it is bubble. I know due to the bubbling and melting the hash does when lit. It is hard to smoke due to the meltyness. You have to hot knife it which is awesome. I also cut a piece of zag and roll up alittle weed with a snake of hash. this makes for an awesome smoke. I got high realy quick and strong. We end up turning off the joint a couple times to save it. SO SO NICE.


You can see the hash in this pic. I couldn't take any other good pics. 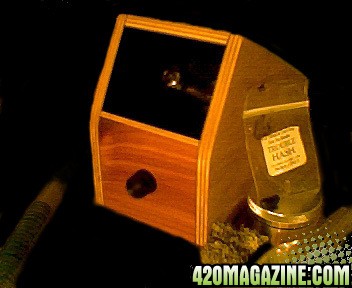 Guide to Types of hash

T
How can I make hash from buster crystals?