Every year since 2014, Rep. Dana Rohrabacher (R-Costa Mesa) has inserted an amendment into a federal spending bill to prevent the Justice Department from prosecuting medical marijuana businesses that comply with their state’s laws. It’s been a temporary but necessary fix to address a fundamental contradiction: that even though 26 states have legalized medical marijuana, the drug is still prohibited under federal law.

The amendment, most recently co-sponsored by Rep. Earl Blumenauer (D-Ore.), has provided some measure of security and stability to responsible medical marijuana suppliers by assuring that they won’t be raided, arrested or prosecuted by federal authorities.

But last week, the House Rules Committee killed the amendment at the urging of Atty. Gen. Jeff Sessions, a hardline marijuana prohibitionist.

Sessions sent a letter to members of Congress in May citing “an historic drug epidemic and potentially long-term uptick in violent crime” and urging them to reject the amendment. He wrote that the Justice Department needs to have free rein to use “all laws available” to enforce the Controlled Substances Act, a woefully out-of-date law that says marijuana is as addictive as heroin and has no medical value.

Of course, that’s baloney. In fact, 46 states have authorized the use of cannabis or cannabis compounds for medical use, including controlling seizures in children. Even Trump, prior to his election, recognized the value of medical marijuana, telling a rally in Nevada, “I know people that are very, very sick and for whatever reason the marijuana really helps them.” Nevertheless, the federal government continues to insist that marijuana products should be illegal even for medicinal use, putting its producers and users at risk of criminal enforcement.

Frankly, the Rohrabacher-Blumenauer amendment should be noncontroversial given the overwhelming public support — in excess of 80%, according to several polls — for medical use.

The Senate approved a comparable amendment in July. But if the two houses can’t agree and the language doesn’t make it into the final bill, the protections for medical marijuana will expire in early December.

This would be a huge step backwards in the movement to liberalize marijuana laws. For years states have taken the lead. Many now allow medical marijuana for patients and some even permit recreational marijuana for adults. One argument is that since marijuana is already so widely used, it would be better for public health and public safety to create a legal, regulated and controlled market. That is why the Times supported Proposition 64 last November, which legalized adult recreational use in California. But even as marijuana laws have changed at the state level, the drug has always remained illegal under federal law, sending a mixed message and causing uncertainty.

Rohrabacher, a conservative Republican who is among the most outspoken advocates for liberalizing drug laws, wants to eliminate at least some of that uncertainty. In addition to his annual amendment, he also introduced the Respect State Marijuana Laws Act of 2017, which would protect individuals from federal prosecution if they are adhering to state cannabis laws, whether for medicinal or recreational use. The bill has a couple of dozen co-sponsors, mostly from the newly formed Cannabis Caucus, a bipartisan group that wants to work on legalization and regulation issues. But the bill still faces a steep climb in Congress.

Congressional leaders cannot continue to bury their heads in the sand. Decades of experience have shown that the U.S. can’t win a war on marijuana. Moreover, waging such a war now would hurt the millions of people who rely on medical cannabis for relief and would overrule the many, many voters who have supported medical and recreational use of marijuana.

It seems inevitable that the federal government will follow the states’ lead sooner or later. Despite Trump’s campaign comments, his administration shows no sign of adopting a more pragmatic approach to marijuana policy. It’s up to Congress to show leadership. 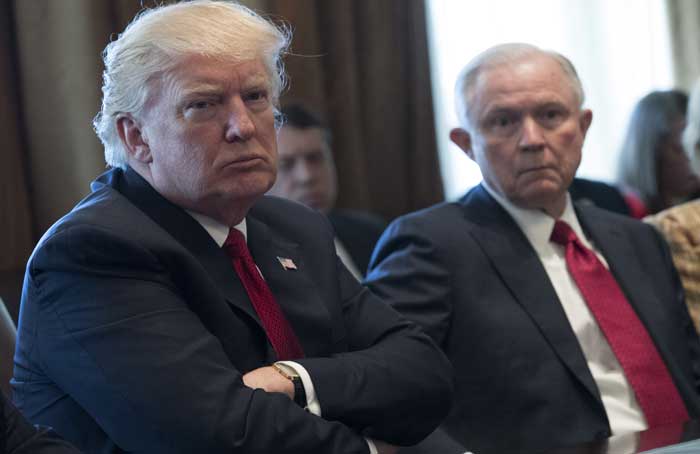 Re: Trump And Sessions Are Ignoring Voters' Overwhelming Support For Medical Marijuan

On The Medical Marijuana Amendment, Trump And Sessions Are Wrong