After last week's election, 20 percent of the country will live in a state where recreational marijuana is legal. Ballot initiatives legalizing the recreational use of cannabis passed in California, Massachusetts, Nevada, and Maine. Others legalizing access to medical marijuana passed in some pretty conservative states: Florida, Arkansas, North Dakota, and Montana. That's a lot of toppled dominoes.

However, we also elected a president who is, at best, a total wild card on cannabis and, at worst, going to oversee the deportation of every Mexican teenager who gets caught with a half gram.

Before the election, President Barack Obama predicted that if California and a few of the other ballot states went legal - which is exactly what happened - it would be impossible to maintain prohibition, telling noted pothead Bill Maher:

"The good news is that after this referenda, to some degree it's going to call the question. Because if in fact it passed in all these states, you'll now have a fifth of the country that's operating under one set of laws and four-fifths in another. The Justice Department, DEA, FBI, for them to try to straddle and figure out how they're supposed to enforce laws in some places and not in others, they're going to guard against transporting these drugs across state lines... You've got the entire Pacific corridor where this is legal. That is not going to be tenable."

When it comes to a stance on pot, Donald Trump is a sphinx. He famously called for the legalization of all drugs at a Miami Herald luncheon in 1991, only to revise his stance in the recent election, saying he supports medical marijuana and thinks the issue should be left to the states. But he also said, "They've got a lot of problems right now" in Colorado due to pot. (Not really.)

His choice for attorney general might offer an answer. Trump is already turning his cabinet into a rogues' gallery - he plans to appoint a climate-change denier to head the Environmental Protection Agency. Early reports pegged one of two Trump sycophants, Chris Christie or Rudy Giuliani, to be up for the top spot at the Department of Justice.

Christie is the most feared among people who care about pot reform, as he vowed on the campaign trail to aggressively enforce federal cannabis law in legal states. However, thanks to Bridgegate, he's seems unlikely to get the nod.

That leaves us with Giuliani, who presided over 51,267 cannabis arrests during the grim "stop and frisk" era in New York City, according to NORML. The man who was guiding the city through the bulk of its racially biased cannabis arrests would be running the DOJ.

Giuliani might not have the same zeal to shut down the cannabis economy everyone's worked so hard to build, but he's basically the poster boy for racially disparate cannabis enforcement. State-level cannabis legalization does not preclude the federal government from enforcing its laws, if it so chooses. The "Cole memo," written by former deputy attorney general James Cole, was a guarantee that his agency wouldn't enforce the federal law in states with legal cannabis, so long as certain conditions were met. But it's a nonbinding memo. Luckily? Giuliani wants to be secretary of state more than attorney general.

Whoever ends up running the show could very well follow Trump's vague promise to leave cannabis policy up to the states while still selectively enforcing federal drug laws. This is why Giuliani's involvement with racially biased policing terrifies me. Thanks in large part to the legacy of that racially biased policing, there are few people of color in the cannabusiness world. I can only think that we'll see that number shrink further under Trump.

Indeed, something I've heard from a lot of people of color when discussing racially based barriers to entry to the cannabis industry is that they're afraid. They're afraid if they hang out a shingle saying they grow or sell or are involved in any way with pot, they're basically putting a target on their back. Being possessed of an abundance of optimism (read: white privilege), I always wanted to believe that in ultra-liberal places like Seattle there was nothing for them to fear - that the cannabis industry could even work hard to heal the wounds of the drug war and become a force of economic revitalization for the communities affected by it. After last Tuesday, I'm not so sure. 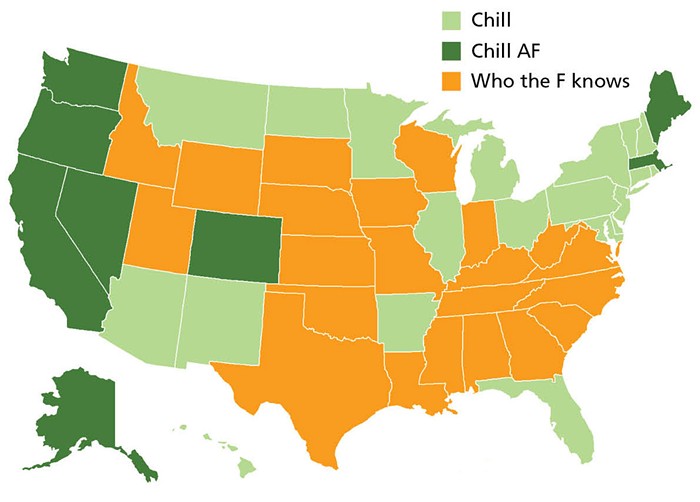