The 24-pound girl is confined to a wheelchair because she can't stand, sit or do anything by herself. She can't even eat on her own.

"I thought she was having 20 to 30 seizures a day, we did her EEG three weeks ago and that's what showed us she was having over a hundred seizures a day," explained Heather Smith, Kenza's mother. She's heard of cannabis oil helping people with seizures and wants to try it in the hope of easing Kenza's seizures.

"She's very low muscled tone, so she's like a rag doll, she's very floppy. She doesn't walk, she can't sit up, she doesn't roll. She obviously doesn't speak, she can't eat on her own, she's tubed fed," said Smith.

Smith said so far the doctors she has taken Kenza to have not been able to diagnose what's wrong with her. All she knows is that her daughter is dying.

"I cry everyday. I cry every single day because I don't know what it's going to be like if I do lose her," Smith said.

Smith knew since she was pregnant with Kenza that something was wrong. It wasn't until she was several months old, that Smith started the tests.

"We've tested her for spinal muscular atrophy, Prader-Willi Syndrome, mild tonix dystrophy...We've done a muscle biopsy, we did whole exome sequencing to test all of her DNA," Smith said.

Smith doesn't know how long she has with her soon-to-be three-year-old. She just knows she wants to make Kenza as comfortable as possible. 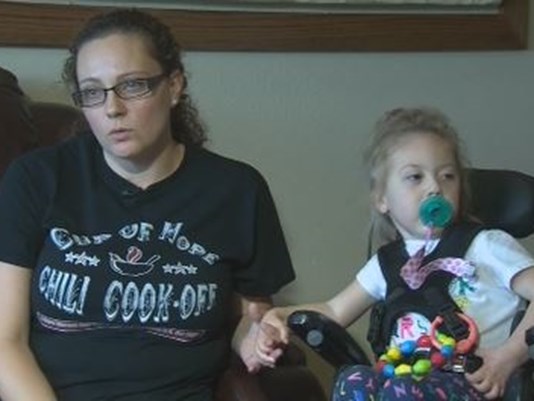 R
Parents In Support Of Medical Marijuana Return To The Capitol