U.K. - Baby Who Suffers From Rare Form Of Epilepsy Given Cannabis Oil For Seizures

A 10-month-old boy who suffers from a rare form of epilepsy is being treated with cannabis. Oliver Osborn has migrating partial epilepsy, provoking up to 100 seizures a day. Victims rarely live beyond the age of seven. However, in a desperate bid to find a cure, his parents are raising money to afford a new treatment from America - that involves liquid marijuana. Also called Realm Oil or Alepsia, is high in cannabidiol content but reportedly does not induce the psychoactive reaction commonly associated with marijuana.

The unconventional practice has drastically reduced the amount of seizures in children - some by up to 90 per cent. Although the treatment is not yet available in the UK, Oliver's parents Rik Osborn, 29, and Danielle Coils, 28, are hoping fundraising efforts will help bring it here. Mr Osborn said: 'Hopefully it could be a step forward. 'I've read about a little girl out there, similar to Oliver, who it has been used on. 'It is a strange route to take, but at the end of the day, when you're up against the wall, when surgery is not an option, it's got to be something to consider.' Mr Osborn, of Peterlee, County Durham, added: 'People say that "if it's not legalised why would you give it to children?"

'But when other medication isn't working, it's something we've got to go for. 'At the end of the day you want what's best for your child and for them to be with you for as long as possible. 'Little things like that give you hope.' To help raise money for the alternative treatment, Rik is taking part in a three day 140-mile Coast 2 Coast bike ride with family and friends hoping it will help research to take off. They hope to raise money for Epilepsy Action charity when the ride starts on June 6th. 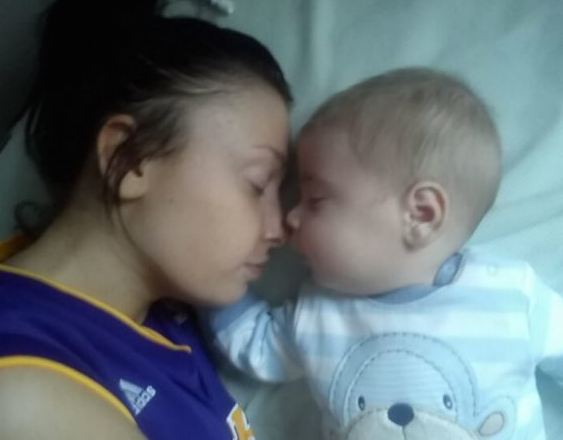 A wonderful photograph of mother and son... good luck!
T

I don't know how much longer our government can continue its propaganda campaign against cannabis, nor how they are going to handle the inevitable u-turn when the public question why they have been lied to for decades...

I think the public is used to being lied to by their government... sad, but true. But are we just talking about the federal government? What about all those states dragging their feet or refusing to pass medical marijuana laws? Elections have never been so interesting...

T
U.K. - Baby Who Suffers From Rare Form Of Epilepsy Given Cannabis Oil For Seizures

Nov 8, 2016
Katelyn Baker
K
K
ID: Would You Give Your Sick Child Marijuana If It Helped?

Jul 1, 2016
Katelyn Baker
K
K
ID: Cannabis Butter Eased Her Child's Symptoms Then Her Kids Were Taken Away From Her