Researchers at UCI think they've figured out why getting a taste of a fatty potato chip or french fry only makes you hungry for more. It has to do with an ingredient of marijuana similar to one the body makes on its own.

"If you think about your college experience, you may remember what the munchies are. This is exactly what we're talking about," said Daniele Piomelli, a professor of pharmacology at UCI who's also director of the med school's Center for Drug Discovery and Development.

Ahem. Even if you don't cop to ever smoking marijuana, you can visualize how this process works:

Endocannabinoids in the body are chemicals similar to tetrahydrocannabinol (THC), the psychoactive ingredient in pot. In the human brain, endocannabinoids regulate mood and make you relaxed and happy. This is what pot does, or so I'm told.

Endos, we'll call them, also regulate fat intake, and the body can make them on demand. Piomelli and his colleagues think that when someone tastes fat on the tongue, it sends an electrical signal the brain. The signal then zips down to the upper small intestine. The arrival of this signal stimulates production of endos, which find the appropriate receptors and triggers a response: Eat more fat! And keep eating.

The same effect doesn't appear to be true when sugars are ingested, according to the study, which was published this week in the Proceedings of the National Academy of Sciences.

There's a good evolutionary explanation for this, Piomelli says: Fats aren't found in nature in nearly the abundance we have today. Cavemen had to go out and locate animals and kill them to get the fats, which are essential for energy and the maintenance of cell structure, Piomelli said. So when our forebears got to eat fats, it makes sense that a biological process urged them to eat as much of them as possible, to stock up.

Scientists, assuming that the key to stopping this compulsive fat-munching, previously figured out a way to block the cannabinoid receptors in the brain with drugs. Which is important, because we now know that potatoes, particularly those irresistible chips, are a key culprit in weight gain over time.

But shutting off the flow of endos causes severe psychological side effects, including anxiety and irritability. That's one reason the FDA rejected one such drug, called Acomplia.

Piomelli and another researcher, Nicholas DiPatrizio, made their discovery largely by accident. They were feeding mice fats, sugars and proteins in solution, and were surprised to find receptors for endos in animals' intestines.

"We put into the gut a drug that can block the cannabinoid receptor. Only into the gut, nowhere else," Piomelli said. "And what we discovered is that when we did that, the animals stopped eating fat."

The "next frontier" of the research, DiPatrizio says, is creating a drug that could potentially curb fat cravings in humans. "I really believe this is the future for this," he says. 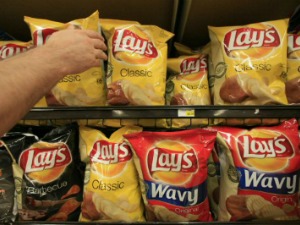