Hundreds of people from all over the UK have descended on Redcar for the third annual Canna Camp Fest.

The three-day festival - Friday to Sunday - held at Redcar Rugby Club is dedicated to celebrating all things cannabis and promote the argument to legalise the drug.

By 4pm on Saturday, hundreds had arrived in camper vans, caravans and tents to spend the weekend while many more paid single day access.

The third annual "smoke out" featured food stalls, live music and a lot of emphasis on the Class B drug.

A statement on the cannabis club's website states: "Canna Camp Fest is a weekend long festival celebrating everything the cannabis plant has to offer.

"We have live music, loads of tasty grub, stalls and vendors for all your heady needs, activists and speakers and plenty of that good time feeling."

Organisers claim the previous two events were trouble-free, but Cleveland Police have maintained that anybody caught with cannabis could still face arrest.

Speaking to The Gazette before this year's festival, Redcar Neighbourhood Inspector Guy Hall said: "We have been liaising with the organisers and we are aware that a private event is taking place.

However, organisers have said the last two events have been trouble free, with no arrests at either.

Organiser 32-year-old John Holliday holds the event through the Teesside Cannabis Club, a group he launched as his interest in the medicinal qualities of the drug grew.

John, from Middlesbrough , said: "We have around 15 acts playing live on stage, and we have people here from all over the country.

"There's nobody causing any trouble here - they all just want to have a good time."

Previously John has stated that he wanted the event to help "start a sensible debate" about using the Class B drug.

John became an advocate for the medicinal use of the drug after he used it to self-medicate a serious gastrointestinal condition.

"I suffer from Crohn's disease and I use it to treat the condition," said John.

"I began to look into the medicinal qualities when my dad was suffering with cancer. Sadly he died.

"That's why we've dedicated this year's event to Debbie Watkinson. She was a palliative care nurse who died from cancer last year.

"She wanted to see cannabis legalised so that people could use it to treat conditions without breaking the law." 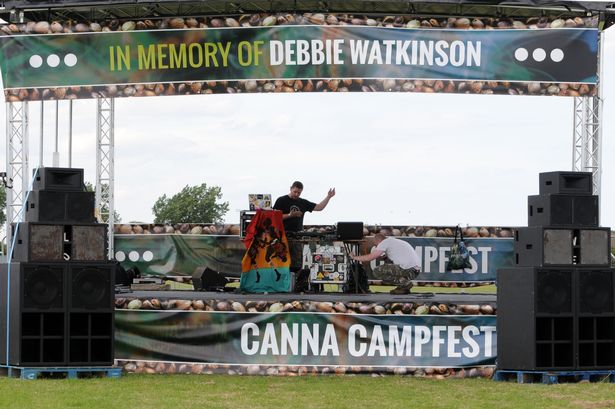