UK: Roadside Breathalyser That Can Test For Cannabis Created By Scientists

Motorists could soon be blowing into a bag by the side of the road to test as scientists have finally discovered a way to instantly detect THC (tetrahydrocannabinol), the psychoactive ingredient in cannabis.

A reliable breathalyzer for arresting stoned drivers is on the horizon after a breakthrough by scientists. It is based on a technique developed to foil airport terrorists as at the moment the results of a blood test can take up to 24 hours.

Now, for the first time, a research team has managed to measure the 'vapor pressure' of THC, one of its fundamental physical properties.

The feat has not been accomplished before, because of the compound's unusual chemical structure. Just one puff on a spliff puts a driver over the limit.

Chemical engineer Dr Tara Lovestead, of the National Institute of Standards and Technology, Maryland, said: "Vapor pressure describes how a compound behaves when it transitions from a liquid to a gas.

"That's what happens in your lungs when a molecule leaves the blood to be exhaled in your breath. So if you want to accurately measure blood levels based on breath, you need to know the vapor pressure."

Roadside collection of blood or urine is impractical and invasive which is why companies have been working on developing a marijuana breathalyzer for years.

Testing for the drug is much more complicated than alcohol. Dr Lovestead hopes her team's research will lay the technical groundwork for an accurate device.

Alcohol has easy to measure high vapor pressure, responsible for the immediate whiff of booze when you open a whisky bottle, for instance.

But THC molecules are much larger and more complex, with loops and spurs that cause them to stick together, resulting in very low vapor pressure that can't be measured in the usual way,

The researchers used a technology called PLOT-cryo (porous layer open tubular cryogenic adsorption) which uses frozen gas to identify chemicals based on the make up of vapors released into nearby air.

Co author Dr Tom Bruno said: "PLOT-cryo is an extremely sensitive technique for capturing and analyzing things in the vapor phase. It was a natural candidate for this type of problem."

He invented PLOT-cryo eight years ago - and airport security staff now use it to sniff passengers or luggage for traces of explosives.

It has since been used to sniff fire debris for evidence of arson and to find clandestine graves by following the faintest scent of decomposition.

It is so sensitive it can analyze even the relatively few molecules of THC that escape as vapor.

In experiments they swept a harmless gas across a sample to capture them, then chilled the gas to collect them.

By measuring their mass in a known volume and temperature, the researchers calculated the vapor pressure as well as a second compound, cannabidiol, which is less psychoactive.

Added Bruno: "Fundamental measurements are the basis of standardization. We are laying the foundation for the reliable systems of the future."

The study published in Forensic Chemistry said the next step is to understand how breath levels of THC correlate with blood levels, and the amount that indicates a person is too impaired to drive.

THC stimulates cells in the brain to release dopamine, creating a happy feeling, but can also cause hallucinations, delusions and affect rational thinking.

On average, the effects last for around two hours.

It affects their ability to concentrate properly, which could increase their chance of having a road accident.

Penalties for drug driving include a minimum 12 month driving ban, criminal record, a fine of up to Â£5,000 and/or six months in prison. 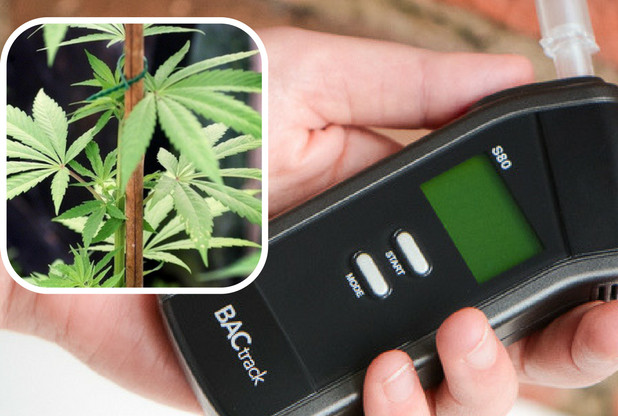 Now, all they have to do is get a consistent result when comparing the results on the machine to the exact amount of impairment that level can reliably predict. They are still a long way from being able to determine that!

Scientists Lay The Groundwork For A Reliable Marijuana Breathalyzer